Important changes to the Necron faction from the vanilla game and new stuff. 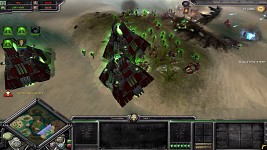 Tough, relatively slow infantry supported by Commander abilities with spamming fast relatively fragile vehicles with a greater emphasis on map control than before. Vehicle support either through long range, speed and high damage (Destroyers and Heavy Destroyers) or harvesting dead Necron bodies and getting new squads on the field (Tomb Spyders).

Most Necron infantry now move faster than in vanilla and now like other races it is important to take territory to develop the economy. It now requires an Obelisk to be built for every 2 Plasma Generators so now capturing strategic points is vital to the Necron economy. Upgrading Obelisks also increases the power generation rate and also adds to the Necron time resource giving the player a further incentive to upgrade them fully.

The Necron Lord abilities are now shared with the Destroyer Lord which is now capped at 1 and treated as a secondary commander unit. Most of the Necron Lord abilities also apply to surrounding units to an extent, e.g. Phylactery will increase the health regeneration rate of units close to the Necron Lord or Necron Destroyer Lord, Chronometron now makes Necron infantry move more quickly as well as slowing enemy units. Veil of Darkness no longer applies to buildings or the Tomb Spyder or Restored Monolith.

Destroyers and Heavy Destroyers are now more fragile, but cost less power and can now use the jump ability. They can also be resurrected using the Necron Lord Resurrection Orb ability similar to most Necron troops by using it near the bodies left behind when they are destroyed.
Scarab Swarms can now attack ground units but their damage as been reduced against buildings.

3 Restored Monoliths can now be fielded at once, however the fire power and health of each has been reduced to compensate. Also each Restored Monolith has to be completed before the next one can be produced. The Restored Monolith main weapon the Particle Whip can now target ground causing damage and disruption like an artillery weapon.

A new squad has been added, the Deathmarks. These are able to snipe enemy troops from a long range and have abilities to either protect them from harm (Phase Shift) or hunt a specific enemy squad (Mark Target). Marked squads can be seen from anywhere on the map and suffer increased weapon damage. Units hit with the Deathmarks ranged weaponry also suffer increased damage for a short duration.
An alternative elite melee combat troop is the Lychguard with slow movement speed but very high melee damage and the ability to automatically execute enemy troops low on health in melee.

Ghost Arks with the ability to transport infantry have been added, buildable from the Energy Core. They are fast and have light weaponry. Doomsday Arks are a variant of the Ghost Ark and forgo their troop carrying capacity in favour of a devastating long range doomsday beam.
The Tomb Blade is new fast attack vehicle option buildable from the Greater Summoning Core. With their quick movement speed and chance to completely negate enemy ranged attacks they are deadly against vehicles, buildings and daemons.

The Tachyon Cyclone is a powerful ability used by the Necron Lord to call down pure electrical energy on an area, creating a swathe of destruction in its path.