With the game startpoint you can set which ever character you want for SP, but it merely represents a point in the level to start in MP.

There are many misc. objects necessary to fine tune a map. It is easy to leave out certain things that complete a basic map. basics. Yes, its boring! but if you learn the basics now, you wont be spending 2 weeks in about a month fixing all the mistakes you will inevitably make.

Decide what type of map you want to make.

First maps, are usually thrown away. (Well actually they are shelved, cause game makers never throw anything a

Among other things, Dedit gives you the option of specifying which game type a particular map will work for. This is a great flexible feature.

THE GAMESTARTPOINT is the ubiquitous object used to start all games. Games are defined by their properties and where they are placed within the game resources. Are they in the right folder. 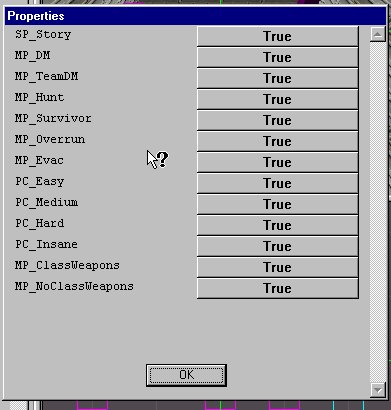 You can keep them all true. But the variety offered, includes specifics for Class based, and regular DM, and extra options for Hard and INsane SP levels. Take advantage of it. Look at the sample and see how this variety was utilized by Monolith. There is much to learn.

With the game startpoint you can set which ever character you want for SP, but it merely represents a point in the level to start in MP.

Start with specific weapons in SP?

Often times you want your player to have specific weapons you need him already armed. If you want to start with a certain weapons here is how you do it.

2.) In the Trigger Target field type [NULL] or any name of a target that doesn't exist in the level, one level designer here likes to use SDF because it's faster to type.

3.) In the TriggerMessage filed put "msg player (pickup_notell weaponnamehere)" without the quotes. Replace weaponnamehere with the name of the weapon you want the player to have, use the names supplied by the PickupObject's dropdown list. The names are case sensitive so you have to type them right. Example:

The pickup_notell command gives the player the weapon the same as if he picked it up except without the text and icon at the top of the screen. If you would like the text and icon to appear you can remove the "_notell" from these examples and they will work with the telling.

Take advantage of what Monolith has offered you. In each of the sample maps, You have the necessary requirements for the different game mode. The DM version has the gamestart points, the Evac versions has the EVAC ZONE, the OVERRUN shows how to set up the different teams. I could explain it here. But the reality is there is no point to reinvent the wheel. Use the nodetree to grab all the required GAMESTUFF for the particular map you are working on. It will require you to move the objects around, but it will assure that you have the required objects. An EVAC MAP will not work without an EVAC ZONE. You need specific GAMESTARTS for SURVIVOR type games. Inserting Spectators points is important to give the expected consistency of the MP game experience.

I'll get into this more if I get a chance. The size of these tutorial expanded exponentially from What I had originally planned. And even so barely represent 15% of what I know about dedit. Time, time, there is always so little time.