In this tutorial, I'll go over the basics of creating a new .esp file, changing a weapon, and playing your new mod.

Hello, I'm Adam, and this tutorial will allow even the biggest modding newbies to start work on a basic mod. I made these tutorials so that people can play around with my mod, or make their own. I realize that the official Fallout 3 site has some tutorials, but those are more based on level design, rather than gameplay. These tutorials are meant for people who want to make conversion mods like mine. The tutorial is written in several easy steps, with big pictures, so don't worry about getting lost. feel free to leave a comment if you need clarification on something. Enough talking, lets get started.

1) First, you need the GECK, get it here: Download

2) After you've installed the GECK, start the program and navigate to the "File" tab in the toolbar, select "Data...". 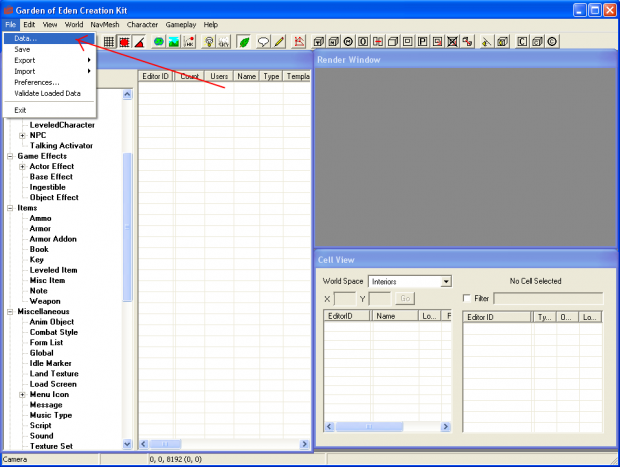 3) A box called "Data" should have popped up. Select "Fallout3.esm" (make sure a black X appears on the left of the title). Press "OK", and wait for it to finish loading. 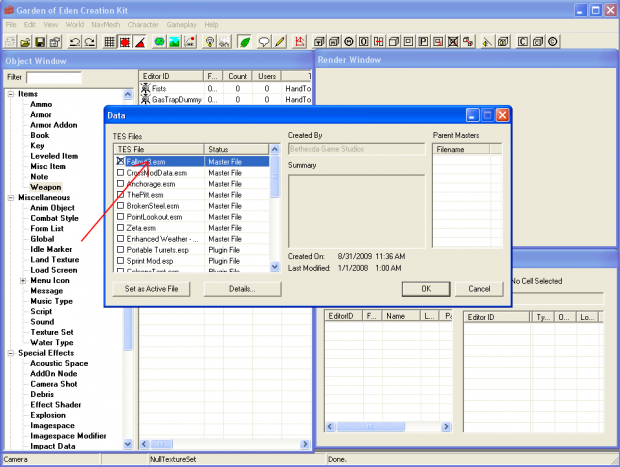 4) Press the save button, and save your mod as something you like. I called my "tutorial_mod", but you can be more creative than that, if you wish. 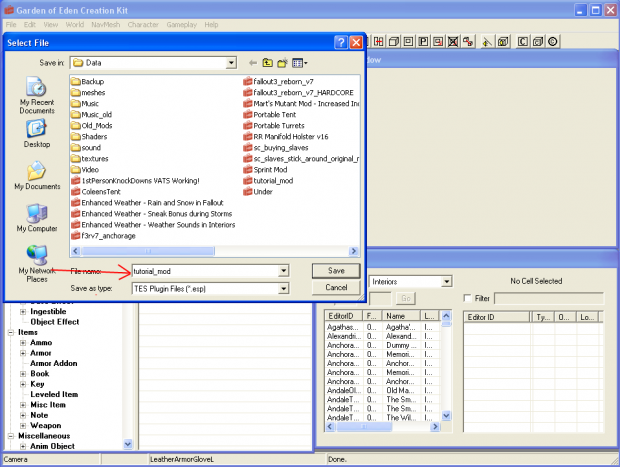 At first the GECK can be overwhelming. You have data that controls 90% of the Fallout 3 game right at your fingertips. I know that when I first used the GECK, I had no idea where to start. For the sake of simplicity, I've decided to start with a weapon mod.

5) Lets get started with some weapon mods. First, lets use the "Object Window\" to find the "Weapon" sub-section. (You can find it under the "Items" section). 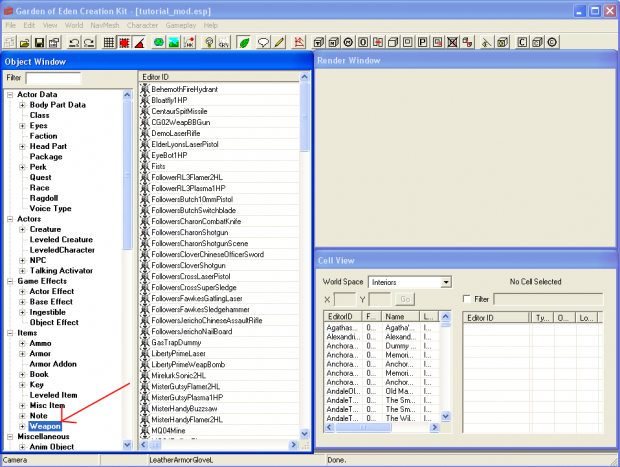 6) Now, click the little [+] icon beside the "Weapon" section. Then click the [+] on the "Weapons" sub-section. Now, select the "1HandPistol" section. 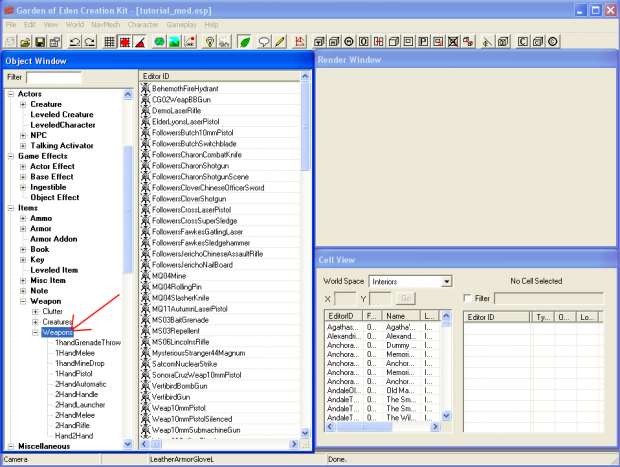 The weapon we're going to be working on is the ever-so-useless "Chinese Pistol". Perhaps second only to the .32 Pistol in terms of uselessness. We will be focusing on naming techniques and conventions, damage, ammo use, projectiles, and clip size.

7) Double-click on the "WeapChinesePistol" item in the "1HandPistol" section. This is the Chinese Pistol, as you might be able to guess from the Editor ID. 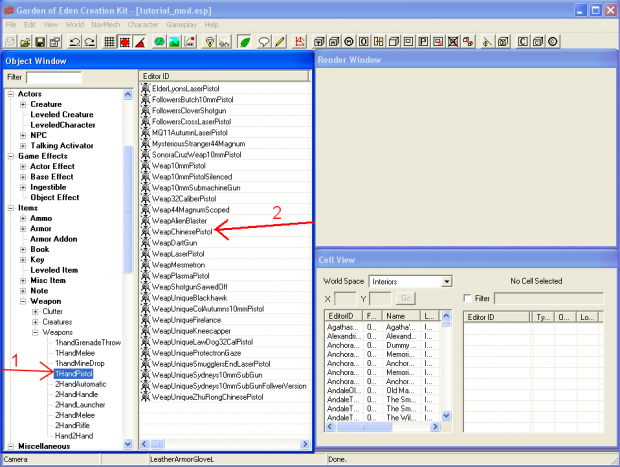 The GECK has two names for most things: and in-game name, which the player see's when they're roaming the wasteland, and an "Editor ID", which is only used in the GECK (for scripts, and other references). For example: if a script is going to add this pistol into the player's inventory, the script line will say: "player.additem WeapChinesePistol 1 1", not "player.additem Chinese Pistol 1 1" (the two ones at the end denote the amount of an item to add, and whether the player should be alerted or not). We'll do a lesson on scripting later.

8) In the top left-hand corner of the Weapon box, there is a "Name" section, change the name from "Chinese Pistol" to whatever you want. I called it a "C96 Mauser", its real-life name. 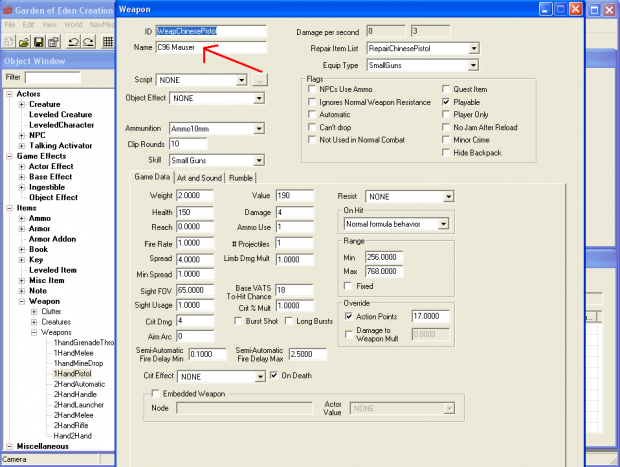 9) Time to test, save your work, exit the GECK (it can take a while, be patient), and enable the mod (I recommend you disable all other mods while you're testing your mod).

10) Load up Fallout 3 with you mod running, and find a Chinese Pistol, or cheat for one with this code "player.additem 00004325 1", minus the quotation marks, obviously.

If everything has been done correctly, your Chinese Pistol should now be named whatever you decided to call it. Time to make it do some serious damage. 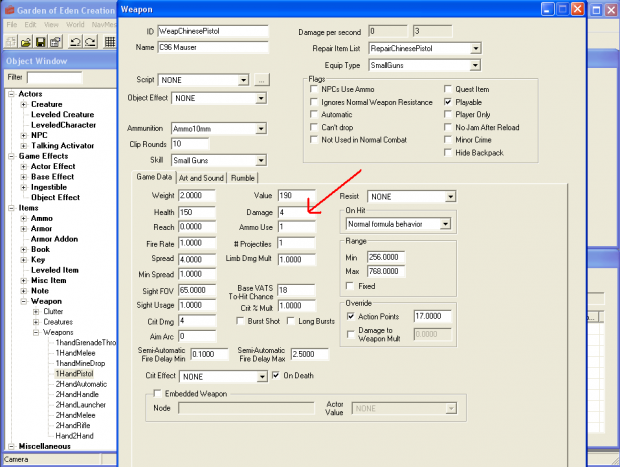 12) Done blasting the citizens of Megaton? Alright, lets make this into a burst-firing pistol. I think a two burst shot is decent. First, change the "Ammo Use" box to read 2, so that the gun consumes two rounds per pull of the trigger. Next, change the "# Projectiles" box to read "2" instead of "1". 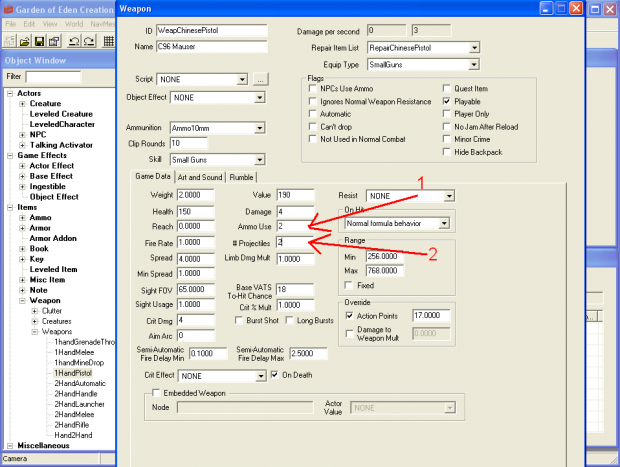 13) To compensate for the doubled ammo use, lets change the clip size. I think 16 shots is a decent amount. Some simple math, and you can figure out that this gives you 8 shots before you need to reload. 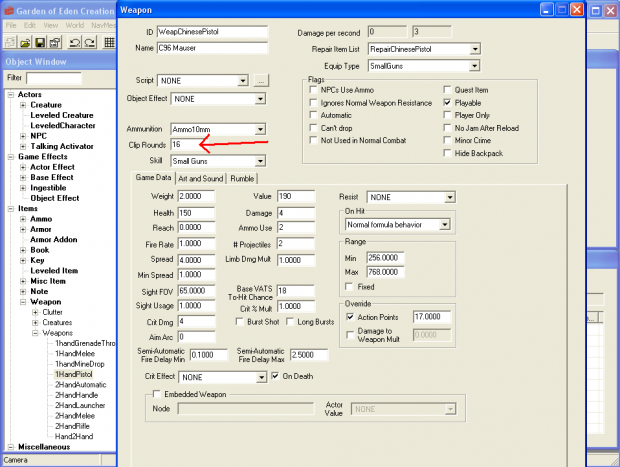 That's all for Part 1. Feel free to experiment with modding the default weapons, take a look at the stats, some are quite self-explanatory. In Part 2, we'll get around to making new items, more depth with naming conventions, ID's and such. I hope this tutorial has been of some help to you guys. Take care,

awesome! Can't wait to mod the Fat Man for some massive destruction fun xD
Thanks a LOT!

No problem man, I can do the next tutorial on projectiles and explosions.

that would be ..... I don't even know the word that would describe that =S ! Much appreciated if you do it!

How does a shotgun-rocket launcher sound? You'd also learn about projectiles and explosions (so you could remove the drop on the fatman projectile, and make the explosion bigger, more damaging, etc).

So we can EVEN reproduce the nuke bomb in this small town just outside the Vault 101? O_O ! Oh my...
And talking about the rocket shotgun, did you meant each projectile is a rocket? or like in Borderlands where you have a single shot rocket shotgun? If it's the first option, then... wow...just WOW!I guess you'll need lots of rockets to shoot with this baby tho xD

You could make an explosion that big, but it would be hard to find a use for it, even if you made the Fat Man shoot like a missile launcher. Your target would have to be several hundred feet away, not to mention the radius of the rads :P

By shotgun rockets, I mean a modded missile launcher, that shoots 3 (you can make this number anything within reason) rockets at once. As you can imagine, it's not ammo conservative, or very accurate, but it IS very fun.

thanks for the info!
And when I asked about nukes, it's just for some random fun, shooting it, then watching it explode.... Isn't it beautiful xD ?

Yeah, I do stuff like that every so often, like the time I made a "Nuke Summoner" that summoned a nuke at the position of every hostile nearby.

whoa..... you should create a Fallout 3: SMOD....*sarcasm* xD
(I was joking, you are already too busy with this project)

What is "SMOD" sorry if I sound like a noob :P

Fallout : SuperMOD (check out the HL2 SMOD). Basicly, they added a crap load of weapons going from PSP disk launher, to banana bombs, or sniper rifles, or Golden Crowbar, and many many more. It's like a mixture of fun / unrealistic (not related at all to the game) weapons that makes the fun much better xD. This can also included skills, like Slow-Mo, or Night vision, or infra red vision, etc...

ohhhh, you should try it out... best saga of all times =) (and the modding community is excellent)... And my bad too, it's just that as a daily (if not hourly) Steam user, I think that everyone knows Half-Life or at least tried it once =@...

Oh, I've played the second one, I just didn't complete it, as I got stuck on that damn hover-boat level. I did love the beeping sound that dead soldiers made :P

I enjoy Steam as well, especially L4D and Portal.

btw, do you mod only for F3 and idtech 4? I don't know if you ever tried Source, but this is the only engine (well, currently I am also trying mapping for NS2) I tried modding for, and I find it quite powerfull and easy to use, what do you think of Source? I know some stuff is quite hard to change, but in overall?

I've also dabbled in the Unreal Engine and the modified ID Tech engine used in CoD4. I've also made an unreleased Reborn mod for Crysis that is quite fun, and a realism mod for L4D. I did try mapping for L4D, it's similar to the ID Tech Engine, powerful, but very hard to learn. I gave up on it, to tell the truth :P

Portal 2 is highly anticipated, to be sure. I wonder if GLADoS will be back?

yes, his best quote so far is:
"you know, I was very busy being dead!"
go to gameinformer's portal 2 hub

awesome, this tutorial is better than any of the ones on the fallout forums or the ones bethesda did.

factual to the point making it informative, instead of 'oh look what we can do'

I suppose the problem with making tutorials for your own game is that you already know the SDK in and out.

But yeah, I had a very hard time learning how to mod Fallout 3, I hope to cover the basics in a few tutorials, and that people can branch out. For example, they could take what they've learned here, and make the Chinese Assault Rifle have a 20-round clip, and deal 25 damage per shot.

Lots of possibility from one small tutorial.

Excellent Tut mate (already knew how to do it tho) when does Part 2 come out? Want Some help With it?

Thanks man, I know it's basic, but it's a good start. And feel free to work on Part 2 and email me it at reborn.mod@gmail.com, although I will eventually get to work on Part 2, but right now I'm quite busy with the release of V8 beta.

haha, i might do it now while i wiat for some friends to come online to play Fallout Online 2238

I have finished Modding With Geck V2 and passed it onto Slayer, and now just awaiting for him to upload :)

Could be a while, I'm spending most of my time modding V8, but all in good time :)

Sweet dude, i'm planning on learning to mod Fallout to, gonna make a mod of my home town rofl

Well, I hope this helps, once you get started, it's easy to learn the rest. The hardest part for me, was figuring out how to start making an actual mod :|

And you want to create a nuked version of your city? Where do you live?

Thank's alot for this. This is definitely a good first step into modding I think. Especially since it's always nice to change // add new weapons to the game since you tend to only use a couple if you play Vanilla.

Hope you put out some more mods on this stuff. I would love to see more of this.

Thanks man, I hope to get some more tutorials done sometime after Reborn V9 is released. If you have any questions about modding, you can always PM me.

Nice tutorial, but i want set double nutrition value of food or make it more common (2x-3x) and for water about 30-50% more hydratation value.
Thx.