MechCommander Gold - Darkest Hours - Weapons & Equipment Actually i'm recreating the tactical guide for mechcommander beginners and players. Since NoGutsNoGalaxy.net is lost - the only copy of information seems to be the one on my personal backup. I upload the information with some cosmetical redesign here on ModDB. This is Part XI of the MechCommander/MC Player's Guide:

Weapons & Equipment can be used by BattleMechs only. Vehicles have hardcoded weapon combos pre-mounted. That´s why game calls them only "support units". On Mechs you can mount many different weapon systems and sensors with different functions for different matters. It really makes sense to get used to the MechCommander weapons because on a long time perspective you won´t be able to master all campaigns without making mods on your Mech Squad. Which weapons you use depends on several points of view. In the first place you should use weapons that you like and which result suits you fine.

In general you can say that Beam / Energy weapons are the better ones on MechCommander because in MechCommander there where no integrated heat-sinks and no temperature raising system while using lasers for example. That outweights the natural weapon balance the BattleTech universe usually has and makes other weapons obsolete... - on one point. When we come to Multi-Player or when you want to make a challenge out of yourself i recommend using alternative weapon combinations. For Multi-Player rules and quickstart notices look here.
Read further Weapon Information from Tactical Weapon Guide!

At logistics menu on Mechbay you can mod your personal Mech. To unmount weapons do rightclick on the equipment you would like to disarm. Select what weapons you would like to have on your Mech. Note that Mechs work on best efficency when every drop of space on them is filled with weapons and equipment. Free space doesn´t make your Mech lighter nor faster.
General Weapon Tips

You can split weapons into two categories, ballistic/missiles and beam/energy weapons. Both categories have Short, Medium and Long Range weapons. Ballistic weapons have limited ammo while energy weapons have infinite ammo. Below you find a list showing them in ingame displayed order. Some weapons got additional information on its posts, have fun reading:For Beginners: Weapon Loads 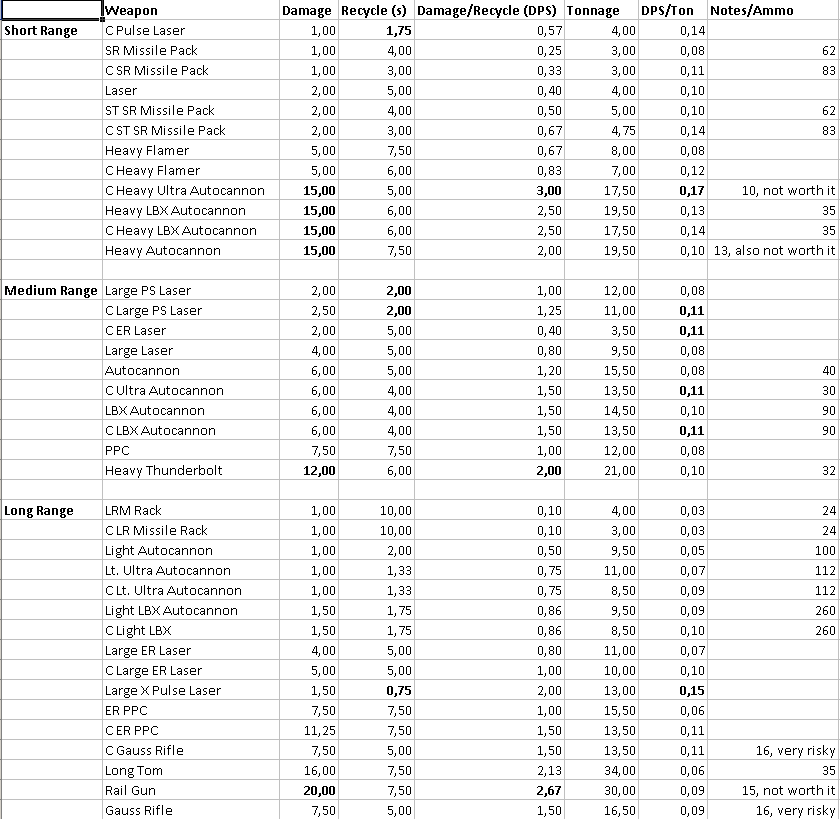 All of those weapons are available to use into MechCommander - Darkest Hours v3.0 in it´s Solo-Missions, partitionally Expansion campaign & Multi-Player mode. In Single-player Original campaign the original equipment will be available.
All of those weapons are although existing in MechCommander Gold - and any other MCG version. But in common Standalone versions usually some weapons are prohibited to be used in shop and only available to loot on battlefields for example. Right yet for MCG-DH v3.0 no changes on Vanilla weapons neither new weapons where made. You will have the same weapons like in Original Version of game but Darkest Hours gives a better availability of equipment at all. One reason for that is that some crates came into MCG-DH and some usual empty crates where filled with weapons.

When considering the overall effectiveness of a weapon or mod, it is important to note the amount of concentrated damage it can deal. Concentrated damage is defined as the size of each portion of damage a single weapon would deal to one armor location. This is an important factor because a 'Mech cannot be destroyed or receive critical damage unless its armor is penetrated (unless in the event of a dead pilot). Therefore, it is important to attempt to concentrate damage to one location. Weapons that do large amounts of damage can penetrate armor more easily than a large quanitity of weaker weapons, since determining the exact section of where a shot hits a 'Mech is entirely random once the general area is determined from the attacker's and victim's general direction.
However, weaker weapons are not inferior; in fact, they are equally important. A weapon with a high concentration of damage usually has a slow firing rate; it can do a large amout of damage to one section, but when facing large 'Mechs, the armor is usually still not pierced and the likelihood of the weapon hitting the same location consecutively is low. Therefore, it is important to have weaker, faster weapons firing simultaneously, so that the damaged area is continously weakened until it is breached. This technique is not always necessary, depending on the tactics and playing style used. It is important to find an appropriate balance between small weapons and large weapons that best suit the situation and playing style.
A notable example of the importance of concentrated damage is the comparison between the C Short-Range Missle (SRM) Pack and the C Streak SRM Pack. Although two C Short-Range Missle (SRM) Packs deals the same damage as one C Streak SRM Pack, the C Streak SRM Pack is vastly superior because the two damage it deals is dealt to one location, as opposed to the one damage to two locations from the pair of C Short-Range Missle (SRM) Packs. This difference is critical because a single unit of damage to two locations is very minimal, while the effects from two damage to one location begins to accumulate very fast.

Ammo explosions seem rare in MCG. It's possible that your mech dies with damage to it's missile weapons, which may be an ammo explosion. However the mech usually has ammunition left over in the ammo bin, so it's not clear whether this is an ammo explosion or not.

You are interested in an enhancing weapon mod for Darkest Hours?
Participate in testing the: