Support Vehicles Actually i'm recreating the tactical guide for mechcommander beginners and players. Since NoGutsNoGalaxy.net is lost - the only copy of information seems to be the one on my personal backup. I upload the information with some cosmetical redesign here on ModDB. This is Part VII of the MechCommander/MC Player's Guide:

The Swiftwind is an unarmed, lightly armored scout vehicle equipped with sensors. The Swift Wind is designed to perform long-range recon. It hasn't considerable armor, and relies on speed to protect itself. The Sensor suite leaves no space for weapons, so you have to keep it away from enemies.

The Refit Truck makes field repairs to BattleMech armor and replenishes expended ammunition. The Repair Vehicle can repair damaged armor and provide ammunition. It cannot repair destroyed weapons or equipments, nor can heal wounded MechWarrior. It may be useful in the first missions, where your pilots and your light 'Mechs will be overwhelmed by heavier enemy 'Mechs.

Your BattleMechs can be repaired using Mech Bays or Refit Trucks. All in-game damage may be repaired, with the exception of:

Repairing is a tactic itself. Often during a battle you will be faced with the choice of repairing your Mechs or sticking around to help your teammates. Do you repair or do you stay and fight? There's no fixed right or wrong answer, but repairing can often turn the tide of battle. With repair bays close by, there's no reason why you should lose a Mech. As soon as your damage enters the "yellow" back off and repair. By quickly repairing your Mech's individually or together, you can safely take on large amounts of badly damaged enemy units.

The Minelayer is a defensive unit designed to delay and funnel enemy movement. Lay down mines. The mines can seriously damage any 'Mech up to 50/60 tons. AI isn't smart enough to fire at the terrain to destroy them, and so they'll keep moving on your minefields, making them an easeier target for your 'Mechs. If you encounter minefields, stop immediately and begin to fire on the terrain: the mines will explode with one shot.

Mine-Layer FaQ by Kerensky (2005)Question: How can I get the minelayer ?
Answer: The minelayer is a vehicle, and must be purchased from the "Purchasing" (third horizontal button on the upper-left corner of the screen) and then the "Vehicles" tab (fourth vertical button in the "current inventory listing" window, below the four horizontal buttons, left edge of the screen). If minelayers are available, their icons, with cost, quantity available and the vehicle description will appear. Then you have to buy it, as you do for MechWarriors, 'Mechs or equipment.

Question: Then? What should I do to use it during a mission ?
Answer: "Briefing/Deployment" button, above the "Purchasing" one. The vehicle will be shown in the "Ready Area" window (lower-left corner of the screen), just like a 'Mech. Vehicles do not need MechWarriors and can be used only once, so if you want an other minelayer for the next mission you'll have to buy a new one. Place the minelayer icon in one of the available slots (vehicles have to be allocated like 'Mechs) and push the "Begin Mission" button (below the mission map, right part of the screen)

Question: Hey, the minelayer is here with my 'Mechs but it doesn't lay mines!
Answer: Sure, the minelayer will not lay mines until you order it to do so. If you select the minelayer and issue an attack order the minelayer WILL NOT launch mines or throw itself in a suicide attack against the target, it will simply reach it. Minelayers have no weapons aside their mines, which must be layed; mines will explode when an enemy vehicle or 'Mech will enter a mined area, allocating damage to the lower part of it (most vehicles will be destroyed at once by a mine and 'Mechs will recieve damage mostly to their legs). Mines are deployed in a group of five, in this pattern: 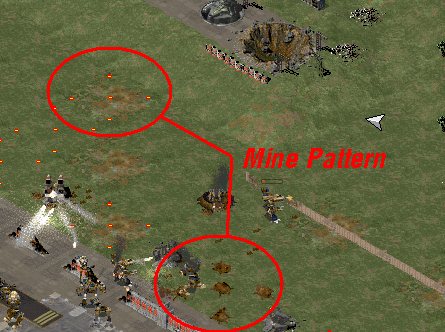 As you may have noted, the * represents the small yellow dot the minelayer places on the battlefield. There are no chances that an enemy vehicle entering a mined area will exit without damage, as they do not know that the area is mined.

Question: You haven't told us how to lay mines!
Answer: P. 70 of MechCommander Manual. Oh well, select the minelayer, keep the "{F}"
button down and issue a normal move order. The minelayer will reduce its speed
to lay down mines!

The Minesweeper clears a path through a minefield by safely detonating enemy mines. Each mine it safely detonates, however, reduces the vehicle´s capability. Minelayers lay down minefield, and minesweepers remove them. Every detonated mine will reduce the vehicle's armor.

The Ammo Truck is an inexpensive, reasonably fast, explosive vehicle capable of replacing a Mech´s ammunition but not armor. Command it like the Refit Truck.
The Ammo Truck is a small, reasonably fast, vulnerable vehicle capable of replacing a ’Mech’s ammunition on the battlefield. Deploy it as you would the Refit Truck; move it near a ’Mech until the Repair Icon (a wrench) appears, and then click that ’Mech to reload its ammunition. Clever MechCommanders have used its combustible payload as an offensive weapon. If the vehicle is destroyed, the ordnance it carries will explode, damaging everything within the blast radius.