Armed Vehicles & Tanks Actually i'm recreating the tactical guide for mechcommander beginners and players. Since NoGutsNoGalaxy.net is lost - the only copy of information seems to be the one on my personal backup. I upload the information with some cosmetical redesign here on ModDB. This is Part VIII of the MechCommander/MC Player's Guide:

The Savannah Master is an exceedingly high speed short-range fighter with poor armor. This vehicle moves in packs that swarm a target, impeding it´s ability to escape. This light hovercraft will be only a nuisance, even for the lighest 'Mech. Do not understimate them when in groups, however.

The Pegasus is an armed scout vehicle equipped with sensors. The Pegasus is ideal for fast recons in enemy territories when infantry resistance is expected. Do not use them to engage any other vehicle, the Pegasus will be destroyed or badly damaged.

This fast, heavily armed scout car is equipped with Guardian Electronic Countermeasures and advanced vehicle sensors.
Originally planned as a highly maneuverable replacement for the Inner Sphere’s Skulker, this fast and heavily armed recon car is ideal for deep penetration missions requiring more than a minimum level of firepower. The Centipede is highly susceptible to sustained fire.

The J.Edgar is a lightly armored quick-strike tank firing pulse lasers. When operating in a group, it´s drivers favor a circling tactic that distracts the enemy. Things become to get serious. Not a threat for anything heavier than 40 tons, the J.Edgar is fast and well armed. Pick it out with long-range fire.

The Harasser is a durable short-range combat mounting SRM packs. It´s drivers use it´s speed to advantage by making quick, strafing runs and then moving to safety. Do not understimate the Harasser, especially when it attacks in groups. Its speed allows it to outmanuever heavy 'Mechs, and the SRMs can deal significant damage to thin (rear) armors. Pick them out with medium/long-range fire.

The Saracen is a fast long-range strike vehicle firing light autocannons. When operating in groups, their pilots tend to concentrate fire and then move on to the next victim. The best way to engage a Saracen is to rush within the minimum range of its two guns; in this way you should be able to save more armor than a long-range exchange will. 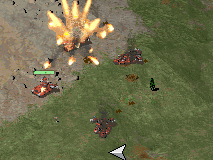 The Striker is a long-range missile tank capable of taking and inflicting serious damage. Engage as it is a Saracen, but keeps in mind that the Striker can fire over walls tanks to its LRM Packs.

The Condor is a well-balanced medium-range tank firing a large pulse laser. A heavy cavalry unit designed for rapid reaction to a shifting battle, the Condor is one of the few heavy hover tanks available. Although expensive to buy and to maintain, this immense hovercraft is capable of a flank speed of 129 km/h and a cruising speed of 86 km/h, making it one of the fastest vehicles in its weight class and as fast as the speediest ’Mechs and vehicles. Six tons of StarSlab/9.5 Mk II armor give the Condor considerable protection for its role, though the bulk is concentrated on the front and turret, notably weakening the sides.

Ever since the development of the first rocket centuries ago, military units have used mobile missile systems to provide cheap and effective fire support. Along with its LRM counterpart, the SRM Carrier serves in every military action across the Inner Sphere in a variety of shapes and forms. The chassis for missile carriers vary in basic design, but they are all essentially military transport vehicles, tracked being the most common, adapted to carry the huge missile launchers and loading equipment. Those adaptations generally consist of reinforcing the suspension systems and armoring the crew and critical components areas enough to survive the back blast from so many missiles. With an average top speed of 54 kph and armor unable to survive counter-battery fire, if forced to engage in direct combat a carrier's life expectancy is measured in seconds.

Bulldog Enterprises was a well-known manufacturer of civilian vehicles that tried to break into the huge market for military hardware by producing the Bulldog Main Battle Tank. As the market for heavy vehicles was already largely saturated with well-constructed tanks, the Bulldog was not the economic success the company hoped for, despite its more than adequate firepower. It is worth noting that Bulldog Enterprises developed the tank's main weapon all by themselves to keep costs down. This is quite remarkable, given that it was producing strictly non-military hardware prior to the Bulldog. The Bulldog could be called a "Jack of all trades", featuring a classic layout of one main gun and a few secondary weapons. Its speed is not exceptional and its protection of six and a half tons of standard armor is anything but ample. On the other hand, it is easy to repair and said to be a reliable and cheap asset for any field commander that needs a backbone for his vehicle forces.