Five steps to success! Actually i'm recreating the tactical guide for mechcommander beginners and players. Since NoGutsNoGalaxy.net is lost - the only copy of information seems to be the one on my personal backup. I upload the information with some cosmetical redesign here on ModDB. This is Part IV of the MechCommander/MC Beginner's Tactical Guide:

bbc_standard_quote wrote: " There's no one way or right way to win each of the missions. Mech Commander is a game about real strategy and tactics, and the true experience of command."
Jordan Weisman, co-creator of the original BattleTech board game and Mech Commander.

There you have it, straight from the horse's mouth. You won't win in Mech Commander without careful consideration of tactics. Mech Commander rewards thoughtful gameplay and often severely punishes the impetuous commander.
You should probably plan on spending about half an hour planning time berfore launching into battle.
Read the mission briefing.
Read it carefully. You usually have two or three primary objectives in each mission. Don't forget that the objectives are available in summary form on the Multi Function Display (MFD) once you have landed.

Most of your missions are not of the "destroy everything" variety, in fact avoiding contact with the enemy is usually a necessity. You usually command a "lance", which is a squad of 4 Mechs, so you will be out gunned and out numbered in most missions.Bear in mind that a briefing is a series of educated guesses as to what you will encounter on the ground. The Fog of War hides many terrors, so expect to be surprised.

In the past the development of Beam weapons is that they needed enormous energy sources. These energy sources tended to be bulky and heavy. Today's Mechs have solved this problem with the use of compact fusion reactors.The seond main problem with beam weapons, and this remains, is they need time to deliver the energy on target.We can usually assume that the prospective target will not oblige by standing still!
Pulsed Lasers deliver more energy per unit of time than conventional lasers but still fal far short of the efficiency of a projectile weapon.

bbc_standard_quote wrote: "A weapon is merely a device for delivering energy to a target."
MiGMan from a speech to the Inner Sphere Academy.

In the most basic of terms, the beam weapon has to heat the target until damage occurs. Therefore lasers are best deployed in groups, as one laser alone is more likely to cause aggravation than the spectacularly fatal damage we seek in battle. The main advantage of lasers is that as long as the Mech's fusion plant is running, they won't run out of ammo.

The time honoured way of delivering destruction is to send a small, dense package at high velocity.... e.g. the gun
Even better if the projectile itself contains a charge which explodes on contact... the cannon.
The main disadvantage of projectile weapons is that they will probably run out of ammunation just when you need it most!

Balance the loadouts of each Mech, and within a lance. Make sure they can defend at close range as well as attacking at long range. Also bear in mind that it takes time to fire a different weapon... so you might be best off using only one type within each range.. short, medium and long. This topic is one area where art comes into play. The situations are so fluid that you will have to develop your own style of command and favoured weapon combinations.

Duke Nukem types need not apply for command positions! Your MechWarriors will supply the guts... you supply the brains! Mech Commander is not a game of sacrificing mindless minions. Your warriors have their own distinct personalities and attributes. Get to know them.

Knowing the sound of their voices helps to sort out what is often very dense voice traffic in battle. Your Mech Pilots are already elite members of the militrary, but there is still no substitute for experience under fire. Therefore take the rating "Green" as a relative one, all the pilots are competent drivers and professional soldiers.
Pilot Attributes
Pilots will suffer battle fatigue if you send them on more than two consecutive missions... watch the red dots above the pilot picture. Six dots indicates a well rested pilot.

Remember that no plan survives contact with the enemy, but if you send your Mechs into battle with no plan at all... you'd better start writing those letters to relatives!

Taking out a bridge with large artellery strike

Sometimes you will have fire support available in the form of small and large artillery strikes. These are good for taking out enemy defenses, slowing an enemy attack or destroying bridges.

Visual recon: Nothing yet beats the "Mk I Human Eyeball" for getting a positive ID on enemy targets.
Use the high ground. Line of sight increases dramatically from elevated positions in Mech Commander.
Most maps will have vantage points from which you gain valuable overviews of the battlefield. Also remember that artillery strikes can't be targete wihout a clear line-of-sight to the target.
Use the MFD:
Use the Multi Function Display ... a lot! After a couple of days of playing (and copping a hiding) I realised that I had been neglecting the MFD map.
The mouse was busy darting abput the tactical map and never seemed to make it up to the MFD.
Learn the keyboard shortcuts (or use a Saitek PC Dash) to control the MFD and Mech movement commands. This allows your mouse cursor more time on the tactical display, designating targets and destinations.

bbc_standard_quote wrote: "If we know that our own men are in a condition of attack, but are unaware that the enemy is not open to atack, we have gone only halfway towards victory."
Sun Tzu - "The Art of War" ~500 BC

An online database is available through the MFD. Use it to get data on enemy vehicle and Mechs. Use the database to plan attacks to take advantage of gaps in the enemy weapons ranges.

... and present the contact as a verbal warning and a contact bearing on the MFD.
Degradation of your sensor coverage occurs as the Mechs move, depending on your pilot's experience level.

which can be accessed via the support menu on the MFD.

To select a group of Mechs use the function keys F1 to F4.
To select individual Mechs it is usually quickest to click on the icons at the bottom of the screen. When you select a Mech it will show as a green light on your MFD.
Move to specific terrain objectives: hilltop, river bend, intersection. Give your troops a definite destination, check your sensors and prepare for the next move.
Use available cover forests and "dead ground" behind hills are effective at hiding your movements from enemy view.
Power Down
When Mechs are inactive for a period, e.g. when wating for the results of recon efforts, power down (Page Down key) to minimise chances of detection by enemy sensors. 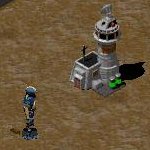 bbc_standard_quote wrote: Be before the enemy in occupying the raised and sunny spots.
Sun Tzu "The Art of War" ~500 BC

Bounding overwatch
Advance using Bounding Overwatch. One element A remains stationary and provides covering fire for the manoeuvering element B. Then the elements swap roles, element B providing cover for element A as it moves.
Attack
A deliberate attack on an enemy installation requires planning. Try to capture Turret and Gate control buildings.

How to aim certain Mechparts? - My Warriors stop firing when i do this! 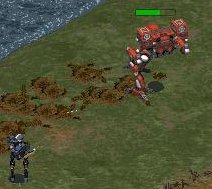 By getting in close the Mechs have managed to damage this MadCat.

Capture supplies and Buildings
Be constantly on the lookout for enemy structures with salvageable parts inside. Pass the mouse cursor over structures and the salvage icon will appear if there are parts inside.
Of course your Mechs don't actually carry the parts out in a little Red Wagon! They mark them for retrieval by salvage teams.
Containers often contain weapons, which are valuable as the Clan variants are usually lighter than their Inner Spehere relatives. 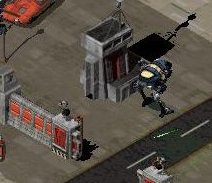 Take a Refit Truck when they are available.
They cost 4500 resource points and are not recovered from the mission, but if you anticipate a slugfest it's a worthwhile write-off. It also saves you on repair bills after the mission, more importantly it means you can take potent weapons such as the Gauss Rifle and Autocannon and reload during the mission. Enemy repair bays are also capturable, though they have a finite repair capacity.
Minefields
The minelayer costs 9000 resource points, but it can be invaluable, especially against enemy vehicles.

How many campaigns for MechCommander do exist?