Rainbow Color Issues / Problems with Retro games Actually i'm recreating the tactical guide for mechcommander beginners and players. Since NoGutsNoGalaxy.net is lost - the only copy of information seems to be the one on my personal backup. I upload the information with some cosmetical redesign here on ModDB. This is Part IV of the MechCommander/MC Beginner's Guide:

Some Windows (XP rare cases), Vista and 7 have compatibility issues with DirectDraw using 256 color depth resulting in incorrect colors. This color issue does not occur on Windows 8 and later; the steps below only apply to earlier versions.

This issue appears to be caused by Explorer.exe resetting the system palette, essentially overwriting the palette defined by the game (hence the rainbow colors). This is evidenced by how taking a screenshot of an affected game will show just the discoloration with black where the other game assets would be rendered and by the fix itself.

A more technical explanation: These games rely on DirectDraw, an API in DirectX which was used to render graphics which is now deprecated. More specifically, they used an exclusive palette, where they set the system palette (the colors the system can use, back when there were only 256 colors) to the palette the game wants to use. However, some applications try to set their own exclusive palette, causing conflicting colors since the game's exclusive palette is no longer actually exclusive and is set to the wrong colors. In newer versions of Windows, CSRSS and the desktop window (explorer.exe) set their own palette, which causes the odd colors.

w7ddpatcher is the most simple and best method.

DirectDraw Compatibility Tool has two operation modes:
'Apply' button allows to automatically create compatibility rule. When field 'Pathname of the target exe-file' contains desired game, on button press it will be analyzed and corresponding rule will be formed. If problems where caused by incompatibility on DirectDraw level they should cease immediately after rule creation. But it's probable that there are some other problems which have to be solved with different tools or could not be solved at all. For example Worms Armageddon version 1.3 doesn't run under Windows 7 x64, meanwhile version 3.6.29 processed with the Compatibility Tool runs smoothly under that OS.
If 'Pathname of the target exe-file' is empty, button 'Apply' will open the file selection dialog.

'Create reg-file' button allows to export compatibility rule as a Windows registry file. This file could be imported into the registry manually or distributed along with the game. I need to admit that reg-files are different for 32- and 64-bit Windows (64-bit version has keys in the additional registry brunch). In the case of the automatic rule creation ('Apply' button) DirectDraw Compatibility Tool detects Windows version itself. Manual application of the reg-file from the 32-bit Windows most probably will not give a positive result on the 64-bit OS but reg-file from the 64-bit Windows could be used on the 32-bit OS version seamlessly. In the latter case one redundant registry key will be created.

Updated list of the supported games will be published on the DirectDraw Compatibility Tool web-page. Click 'homepage' link in the upper right corner of the program window to get there. If you managed to solve problems with a game which is not in the list, you could help the project leaving a comment on the site.
At the current moment color corruption has been fixed for Fallout 1, Fallout 2, Worms Armageddon (version 3.6.29), WarCraft 2 Battle.net Edition and Theme Hospital. This method should work for Age of Empires as well but has not been really tested.

Hope I made a life of an old-gamers and fans a little easier. Any comment and suggestion are welcome, especially since the program homepage is my blog.

PalettestealerSuspender is a launcher tool which allows you to play Directdraw games in fullscreen on Windows Vista and Windows 7 without color problems. See this site for a full description of the problem and solutions.

Games: this menu will subdivide itself into a list of games. When starting the program for the first time, no games will be present. For each game added, a (un)checkable entry will appear, together with an option to start a game manually.
Configure...: this menu item brings up the configuration screen, where you can add games and manage settings. Double clicking the icon has the same effect.
Quit: exits the program completely.

Image file lost
Right-click menu after starting the program for the first time.

Image file lost
The configuration screen is opened by choosing "Configuration..." in the right-click menu or by double clicking the notification area icon. Games are added in this screen.

- A list of games: you can add game executables here using the "Browse..." and "Add" buttons. Double clicking removes entries from the list. Checking an item denotes that you wish to monitor this particular game (remember that entries can also be checked from the right-click menu). Every change you make to this list will also be reflected in the right-click menu under "Games".
- A list of palette stealing processes: which should require no tampering in most cases. Palette stealing processes are automatically detected and added to the list while the configuration screen is active. If the program isn't working correctly for you, you might want to leave the configuration screen open while running the game to let new entries appear in this list. By checking and unchecking items you can choose which processes you want to suspend. Note that it is impossible to check or uncheck some processes.
- The method to suspend and resume palette stealing programs: in most cases, the recommended option should work well enough. Try the other options in case the program isn't working.
- Buttons: "Save and Hide" saves your settings to "save.xml" and hides the program back to the notification area. "Quit" completely exits the program and has the same effect as picking "Quit" from the right-click menu.


Starting and playing games
There are two ways to play your games. The first one is to "manually start" your games with the right-click menu. PalettestealerSuspender will automatically suspend all palette stealing programs and resume them when exiting the game. 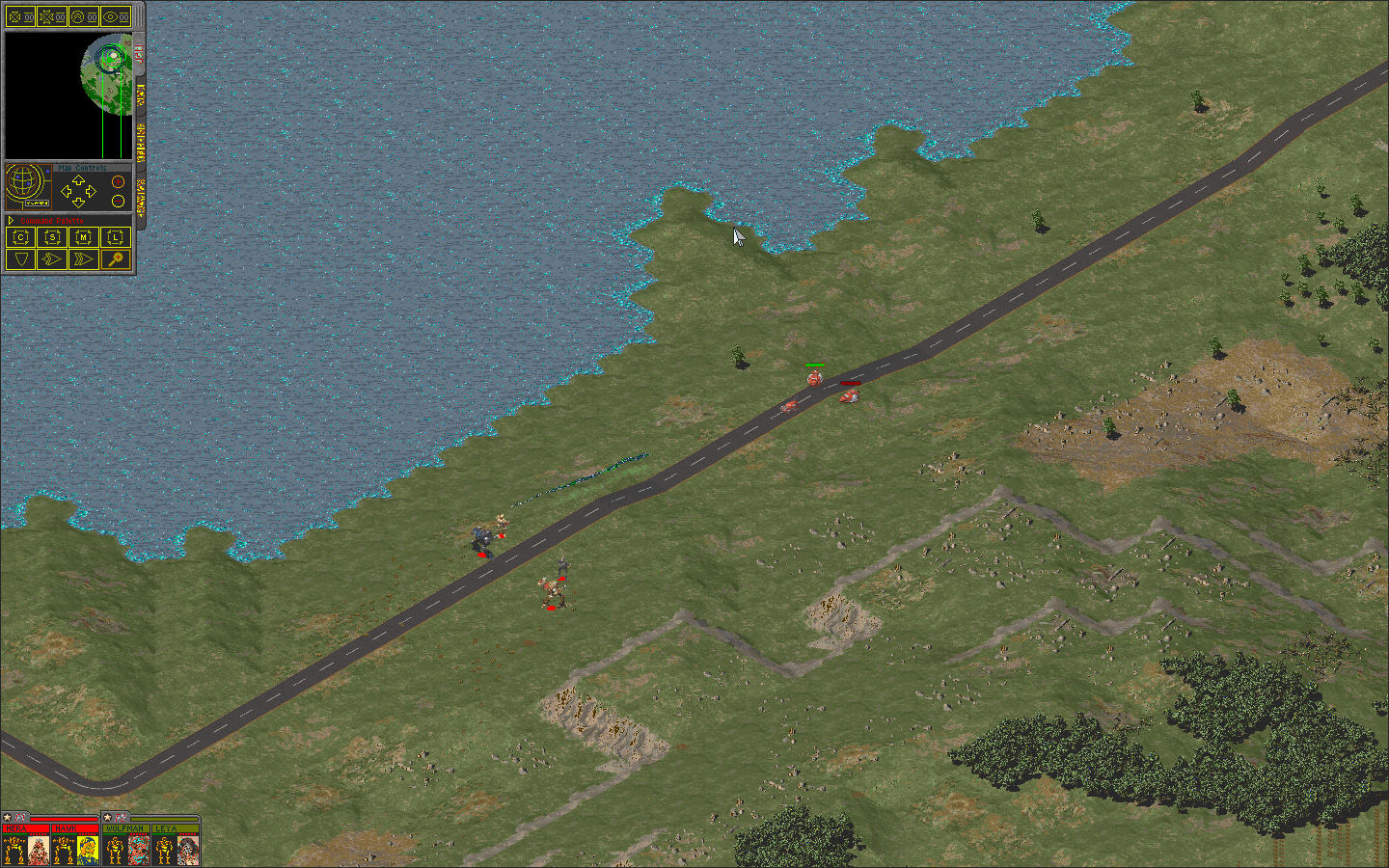 The first way to start games: by manually starting them from the right-click launcher menu.

The other way is to let PalettestealerSuspender monitor your list of running processes to see if a game has been started. To allow PalettestealerSuspender to monitor a particular game, check its entry in the configuration screen or through the right-click menu itself. This option provides the most flexibility, as you can just configure a list of games you want to monitor in the configuration screen, make sure they are checked, and then just hide PalettestealerSuspender and forget all about it. It will automatically react when you start a game, while still allowing to "manually start" games from the right-click menu as well.


Usage (Console)
As of April 2011, the program also contains a console mode, look in "readme.txt" for usage instructions.


License and Disclaimer
This work is licensed under a Creative Commons Attribution-Share Alike 2.0 Belgium License as stated at Creativecommons.org

THIS SOFTWARE IS PROVIDED "AS IS" AND ANY EXPRESSED OR IMPLIED WARRANTIES, INCLUDING, BUT NOT LIMITED TO, THE IMPLIED WARRANTIES OF MERCHANTABILITY AND FITNESS FOR A PARTICULAR PURPOSE ARE DISCLAIMED. IN NO EVENT SHALL THE REGENTS OR CONTRIBUTORS BE LIABLE FOR ANY DIRECT, INDIRECT, INCIDENTAL, SPECIAL, EXEMPLARY, OR CONSEQUENTIAL DAMAGES (INCLUDING, BUT NOT LIMITED TO, PROCUREMENT OF SUBSTITUTE GOODS OR SERVICES; LOSS OF USE, DATA, OR PROFITS; OR BUSINESS INTERRUPTION)
HOWEVER CAUSED AND ON ANY THEORY OF LIABILITY, WHETHER IN CONTRACT, STRICT LIABILITY, OR TORT (INCLUDING NEGLIGENCE OR OTHERWISE) ARISING IN ANY WAY OUT OF THE USE OF THIS SOFTWARE, EVEN IF ADVISED OF THE POSSIBILITY OF SUCH DAMAGE.

Found on Bedagainstthewall.blogspot.com
downloads of the tool on this site are offline / expired but i
found download on Github.com
Original Macuyiko site: Blog.macuyiko.com

3. DxWnd DirectDraw emulation - download page
DxWnd was originally created to enable old DirectX games to run in a window. Nowadays it provides far more features: It can fix the odd rainbow color issue, enable time stretching, and you can decide between running the game in a window or in full screen.

4. Registry hack - manual override
Windows 7 actually has a builtin, hidden fix for this issue but requires editing the registry.

- Run your game at least once and exit out of it.
- Go to the registry and navigate to HKEY_LOCAL_MACHINE\SOFTWARE\Microsoft\DirectDraw\MostRecentApplication (if you're using 64 bit, go to HKEY_LOCAL_MACHINE\SOFTWARE\Wow6432Node\Microsoft\DirectDraw\MostRecentApplication)
- Take a note of the name, game.exe, and the ID, which looks similar to this: 0x02e41c67
- Remove the '0x' part of the ID and separate the values into pairs, like this: 02 e4 1c 67
- Take the pairs and reverse their order, like this: 67 1c e4 02
- Open Notepad and add the following. Change NameOfGame to whatever you want, leave Flags alone, enter your own ID keeping commas intact, and change game.exe to whatever it is.

7. Save it as fix.reg and run it to import it to the registry.

---
Not the best method for new users as editing the registry incorrectly can damage your OS.
---


5. Kill Explorer with batch script - not recommended!
Paste the following into a text editor and save as a batch script. Run it from the game's folder:
Code: [Select]TASKKILL /F /IM "explorer.exe"
start /w [insert executable name here].exe
start explorer.exeIf script fails/crashes before it restores the Explorer, you will be left with a blank desktop screen and will have to manually restart the process by the windows key+R to bring up the run dialog and typing "explorer.exe"

RizZen´s note: I never tried that tools above neither i can guarantee nor promis that color problems can be 100% solved on Vista and Win7 OS - but i have some feedback that method 1-3 are helpful for some people who tested it - so i recommend giving it a try when i would use those OS.