The fifth in a series documenting the production of a commercially viable game, entirely unaided. In this article we explore five ways to ensure that your soundtrack complements the game while maintaining a strong musical identity all its own.

Environment is when your perception of multiple senses forms a gestalt.

I’m huddled around a laptop in a pitch-black office; nothing here but a screen and the ghostly visage of a hungry developer wrapped in headphones, finishing off the chorus for the submarine level. It occurs to me to end that last orchestral bar on a minor key, adding a dramatic twist to the epic musical story unfolding. I play it back with the pitched submarine ‘pings’ over the top and begin bouncing around in my seat like the madman I’ve surely become. It’s not just a badass track, I’ve created the gestalt.

The definition above is one that permeates my creations. From the setting and design of the levels, through to the 3D animations and user interface; the underlying goals for me always, are both an original identity and aesthetic continuity. So when it came to adding music to this game, I wanted to weave a soundtrack that could only be identified as Minesheeper music.

To achieve this, I relied on a few important aspects. First – and not to put too fine a point on this – I’ve been making music for a long time in one form or another. I didn’t just wake up with a working knowledge of DAWs, sampling and synthesis. I started before many of you existed. Secondly, I followed a set of basic rules. If creativity is unbridled chaos, then rules bring order and focus to your work; you’re marketing to the ears. What follows are the five rules that I followed.

"If creativity is unbridled chaos, then rules bring order and focus to your work; you’re marketing to the ears."

Your game’s setting will inform your genre, your themes and your choice of instrumentation. For Minesheeper I knew that I wanted to forego the obvious, blippy arcade game music in favour of something more cinematic. It followed that I would need to sample a lot of orchestral scores. Particularly military music, with a smattering of science fiction tropes. To that end I pored through a lot of public domain music that would not require any copyright clearance to use. 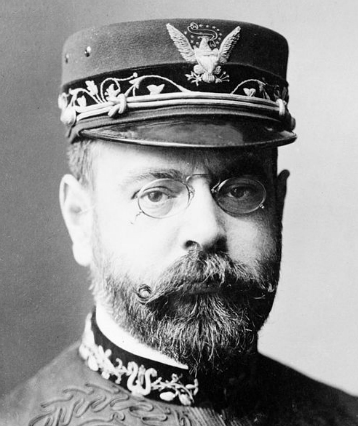 John Philip Sousa (1854 – 1932)
Looks harmless enough, but could kick your arse at draughts

One great place to start for this was Musopen.org; there’s a ton of free-to-use recordings on there, including the work of the esteemed John Sousa, who wrote marches for the American military, many of which are still played today. Some of his more recognisable work includes The Stars and Stripes Forever and The Liberty Bell — or as you know it, the Monty Python theme. It has a lot of the pomp and vitality that captured the essence of what I was going for, so a fair bit of the sampling came from him, though I was careful to only use some of the more underplayed and minor key passages. A lot of his work is just too silly.

I also found some incredibly obscure science fiction films for some of the more classically haunting sounds that I’d be using.

2. COMPOSE WITHIN YOUR WORLD

Arrangement and instrumentation should somewhat match the tone of the game’s physical environment. Think about the kinds of sounds you’d experience in a given setting and see if there’s a way to fit these into the music. A good example of this is the track Song of Sirens (the submarine level), in which I arranged several layers to really evoke the setting.

The track opens with submarine pings over a staccato intro, reminiscent of a high-seas action adventure movie. When the track moves into the verse we hear a female choral passage, which actually repeats over three bars instead of two. It breaks the urgency and brings a sense of mysticism to the piece. It also reminds one of classic underwater and mermaid sequences from old movies.

Listen to your track on its own, without the rest of the game in play. If the song still tells you the story in the absence of visual and gameplay cues, it’s likely that you have done it right.

Implementing established song-writing patterns will lend the listener a sense of familiarity with the music. Traditionally a song consists of at least three of the following: Intro, verse, build, chorus and bridge, also known as a middle eight. This becomes especially important if your music is intended to loop seamlessly, as it does in this game.

By having at least three varying passages we are able to bring a subtle, shifting sense of drama while not getting too repetitive. Some of the tracks have very clear verse-chorus differentiation, while others rely on the middle eight to offer a sense of progression.

As with the other aspects of Minesheeper, I’ve set some boundaries for what does and does not belong in the soundtrack, in order to maintain a strong musical identity. In defiance of practically every arcade-style action game out there, I decided to limit my tempos to a more plodding, measured pace. This allowed for me to tap into the dubstep genre for much of it, while avoiding some of its more glaring clichés, including overly distracting glitches and tired build-ups.

Sequential Circuits Prophet 5. I defy you not to play the wobbly synth stabs from Blue Monday

Synths will likely always feature heavily in my music and I try to stick to very basic analogue and FM sounds, such as can be found on Moogs, early Korgs and the Prophet 5. I’m not afraid to break my own rules here and there if the music warrants it, as can be heard in the rather clubby, Faithless-esque pizzicato synth on Panzer Shaf, the tank level. Trust me, it had to be done. 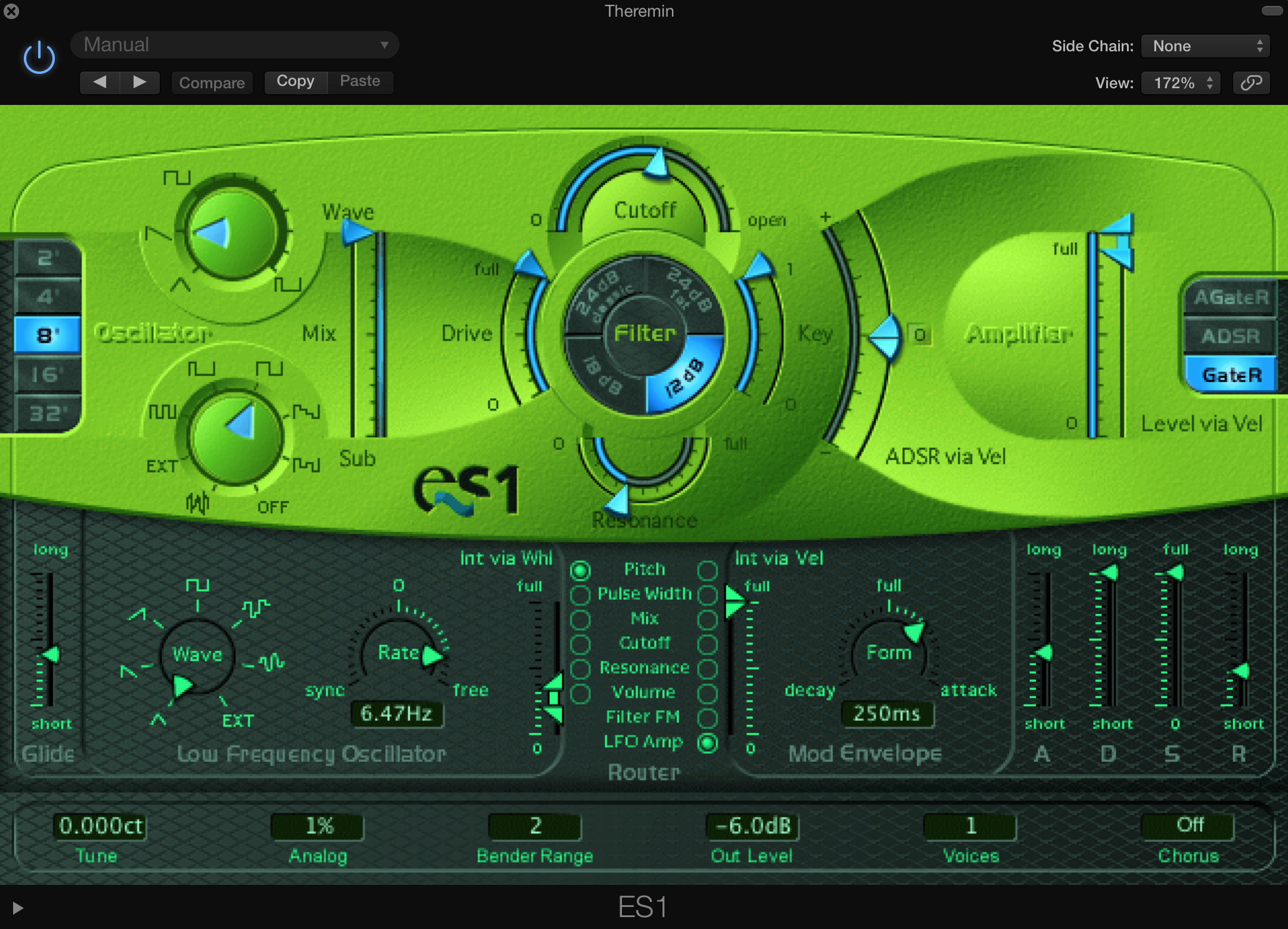 The track for the UFO level (entitled Because Aliens) was never not going to feature a theremin and of course I had to build this myself using Logic’s ES1 software synth. The effect would not fool an aficionado of course; I even passed the patch around a few muso friends to see if they could improve upon it. But in the context of the track it plays very well. Listen out for the space invaders sound effect during the intro.

5. BE MINDFUL OF YOUR FOOTPRINT

One of the biggest issues when composing a looping song, is in finding the balance between creating a memorable soundtrack and not annoying the listener through subsequent repetitions. Additionally, your game is going to have a lot of sound effects and you don’t want the music to clash too much with these. So it’s important to remember that busy or prominent lead parts (I’m looking at you, 80s guitar solo) will likely call too much attention to the passage and reinforce the sense of repetition, to the detriment of the game’s overall continuity.

You can keep the middle frequencies a little sparse, to make more room for the audio effects and in lieu of a busy melody, use key shifts and chord progressions to drive the song. This may not work for all game genres. Many cutesy platformers and action games are driven by their melodic, earworm-inducing silliness. But it wouldn’t work in this game’s context.

In conclusion, you’re likely to create a consistent soundtrack by tempering your somewhat chaotic sensibilities with a handful of underlying rules and motifs, as above. These rules inform how you source samples as well as ensuring that your tracks ‘live’ inside your game’s genre.

If composed with an understanding of the intended setting, your tracks will resonate with your visual design cues while maintaining their own musical identity. Hopefully they will form an inextricable component of your game’s overall environment.