King’s Conflict is a free and unique card-based strategy wargame. It’s in late stage alpha, but is fully playable already. The game will eventually be cross-platform (Windows/iOS/Android/Mac), but at this stage is Windows only. The game has a full walkthrough tutorial; this article is a quick alternative for people who want to get a feel for what the game is about before the download and play it.

KC games are two-player turn-based online contests between opposing kings; the winner is the last king alive. King's Conflict is best played against a human opponent (the ‘Online' button), but you can also play against an AI opponent to get the hang of the game, and to hone your strategies.

The game is played on a map of 11x11 square tiles. Each tile has a type (e.g. Forest, Mountains, Plains), and can hold one unit (a servant, structure or king). Players always start with their king in the bottom-left tile, and are always blue; the opponent's King starts in the top right tile, and is always red.

The map is split into regions, areas of adjacent tiles of the same type (see below). Regions can be neutral (black border) or controlled by either player (blue or red border). To control a region the total health of all your units within it must be three times that of your opponent.

King's Conflict is played using cards. You play with a (shuffled) deck of thirty cards, and draw four at the start of the game (five if you are going second). After that you draw one per turn. Cards are either servants (which you play onto the map as mobile units), structures (like servants, but immobile), or commands. Servant and structure cards have gold and food costs, as well as attack and health values - see below.

Your resources in-game are gold and food. Controlling regions generates gold and food, as do some servants and structures. Gold is earned at the start of each turn, and you spend it playing cards; it carries over from turn to turn. Food doesn't accrue - just make sure you have enough supply to feed all your units at the start of your turn, or they will take famine damage. The labelled screen captures below give you a rather in-depth version of this. 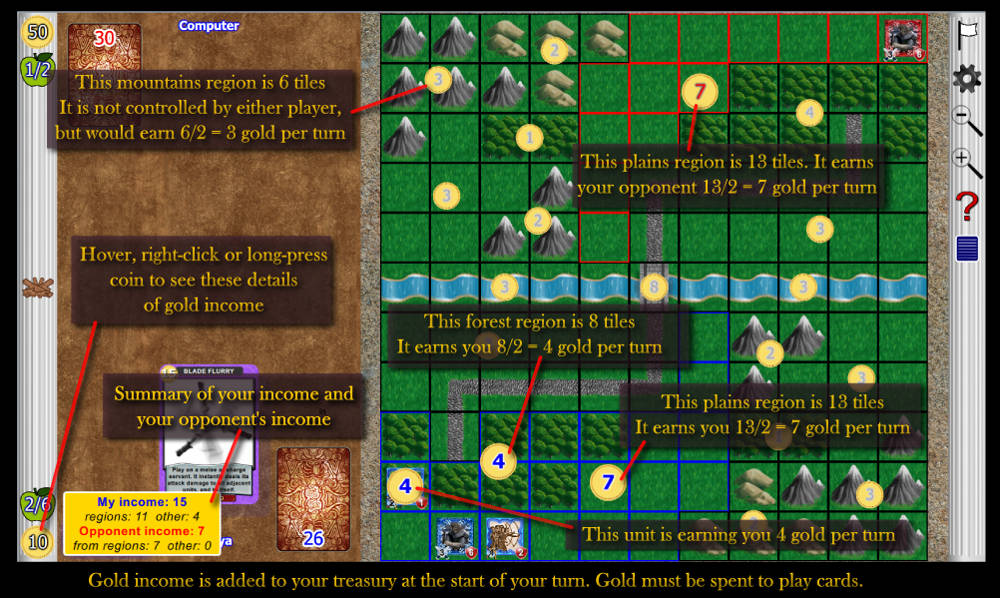 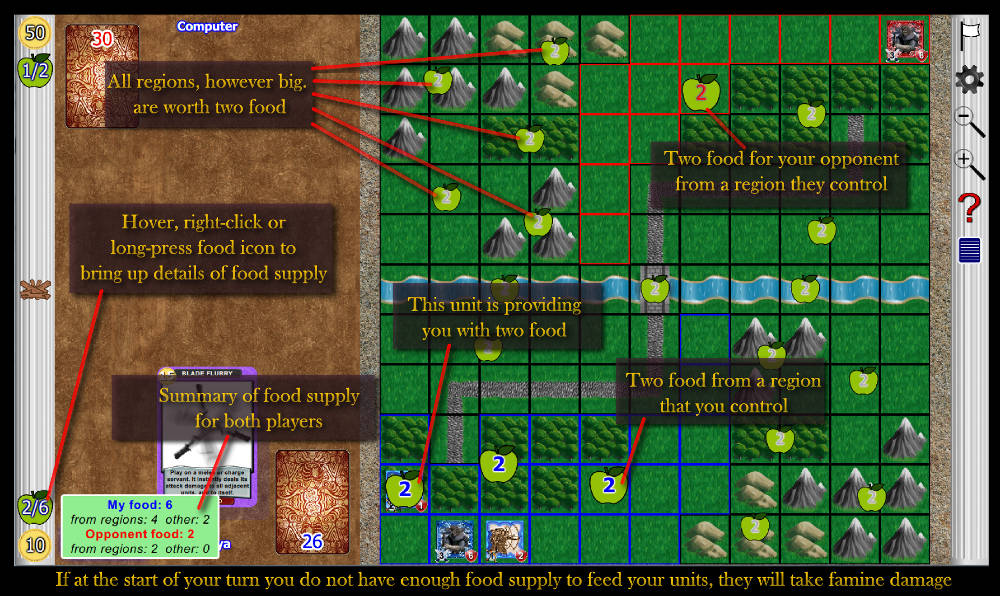 KC turns consist of a play phase, where you move servants and play cards, followed by a combat phase where the computer resolves any battles. In your play phase you can play cards (easiest way is by dragging them to a tile), and move units (again by dragging them), in any order.

You can play as many cards as you like, so long as you have enough gold. Playing servants or structures places them on the map - you can only play them next to existing units. Playing commands can have all sorts of effects - it all depends on the card description.

Each servant can move once per turn (a sparkling border indicates which ones you can still move), though they can't move on the turn they are placed. Most units can move three tiles (‘charge' units are the exception), but Kings can only move one. Most units also can't enter water, mountain or volcanic tiles - exceptions are noted on the card description. 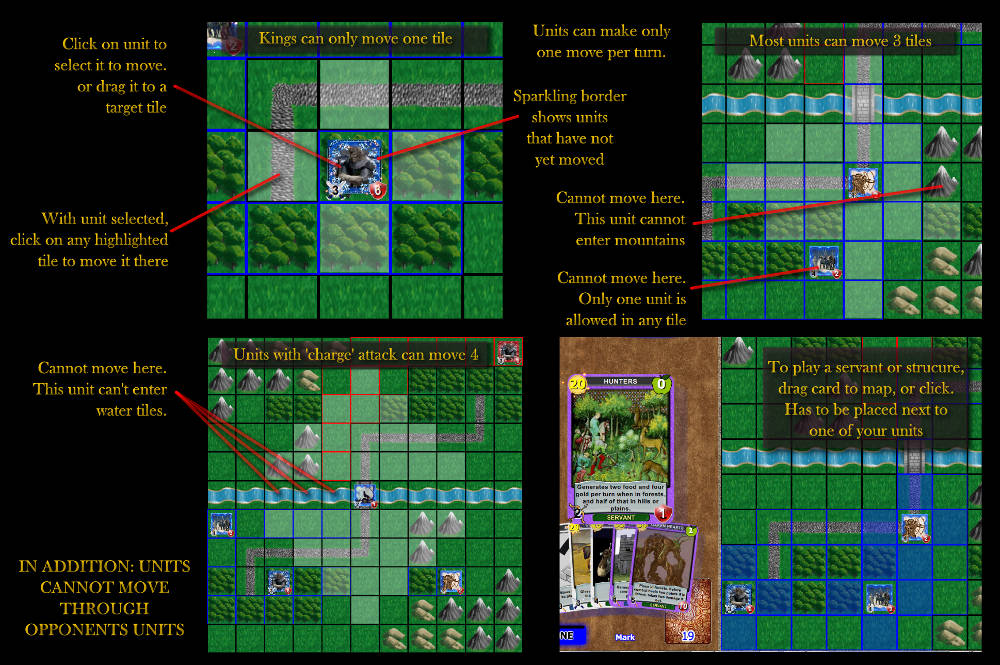 When you've finished moving, click the blue ‘DONE' button. You only have two minutes to make each move in an online game!

Attacks are carried out in a standard order (see below), which depends on the attack type of the unit. Additionally on your turn opposing units of the same type attack first, so the order is their magic, your magic, their ranged, your ranged, their charge, your charge, their melee, your melee. In the enemy's combat phase of course, your units have the advantage and attack first.

After each of these 8 attack sub-phases is complete, dead units are removed.

Some units have more than one attack (see card description) - these can only attack each target once though, so can only use their extra attacks if they have extra targets.

After your combat phase is complete, it's the enemy's play phase, and the game continues until one King dies!

While you can play with the default deck and king, the real fun in King's Conflict comes from designing your own decks to suit your strategy. From the main menu, click ‘cards' then ‘create' to create a deck. Choose one of the four available Kings (‘Warrior King', ‘Mage King', ‘Rich King' and ‘King of the Hunt'), each of which has a unique set of cards that only they can use. Then build your deck with the deck editor (see below).

Your deck must have exactly 30 cards - you can have any combination of servants, structures and commands, but a good balance is advisable. You can add more than one copy of each card as well, although if a card is ‘rare' (purple) you can have at most two, and if it is ‘epic' (black) you can only have one.

Top Decking. King's Conflict has no ‘mulligan' mechanic for swapping in cards at the start of the game, but instead you can select up to three cards in the deck editor as ‘top-decks' - these will be guaranteed to appear in your starting hand, but at the cost of starting gold.

Burning. During your play phase you can ‘burn' a card for extra gold by dragging it onto the fire on the left of the screen. You will instantly receive half of the card's gold cost. You can only burn a card every other turn.

Log. The game features an event log (icon on right of screen) that shows you exactly what has happened if you miss anything.

In-game chat. Click the speech-bubble icon on the right hand side (or press /) to send your opponent a message.

Map zoom and scroll. The map can be zoomed and dragged about - use the magnifying glass icons on the right - click and hold either of these to return to ‘fit to screen' zoom level.Info. You can get information on most game objects (units, regions etc) by either hovering the mouse over them, or right-clicking them.

Notifications. If you find there is no-one online to play against, just minimise the game and get on with something else. You'll get a popup notification if anyone hits the ‘Online' button.

Want to find out more?
The best way to find out more about the game is to play it - but there are also many blog and forum entries on the KC website that can help you. Direct links to a few articles are given below: