The command line in the Hunger Games Simulation can be used to change settings beyond that allowed in the standard interface, allowing pre-game alliances, custom Cornucopias, and more.

Posted by Cruiser1 on Nov 27th, 2014 - Intermediate Client Side Coding 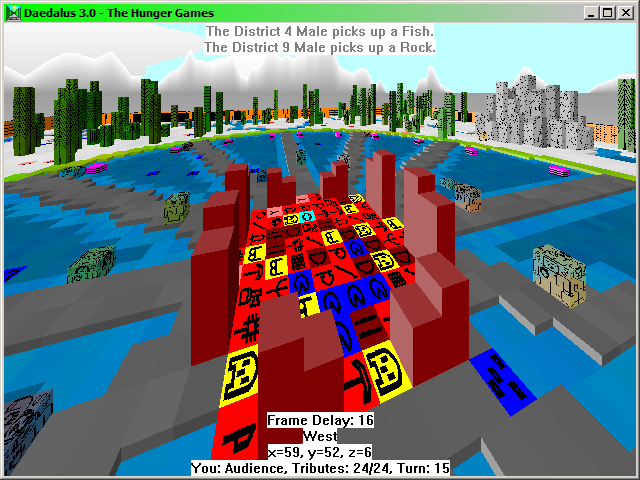 The Hunger Games Simulation features a console or command line that can change internal settings. To bring up the console, press "Enter", then type a command line and click OK to apply it. The game is implemented in the "Daedalus" engine, and the Daedalus command line is documented at: Astrolog.org - Some example command lines to change the Hunger Games in ways beyond the game's user interface are below. Note the game is entirely implemented in the text file "hunger.ds" in the Daedalus install directory, which contains a long sequence of Daedalus command lines defining the game. That makes the game easy to modify, since command line changes or additions can be placed in hunger.ds to make them permanent.

Wall colors: Type "@KCorn Maroon" in the Daedalus console (minus the surrounding double quotes) then start a new game to have a dark red colored Cornucopia. The color can be any common named color or a hexadecimal RGB value, e.g. "@KCorn #694a3b" for a gunmetal bluish gray like the 74th Hunger Games in the movie. Type "@KMaze Orange" to change the color of brick walls. Type "@KTube Magenta" to change the color of launch tube platforms.

Health: Type "@SHp 20", and tributes will start with extra hitpoints (or however much you specify). Health greater than 13 will be displayed as 13 when looking at other tributes. Note if max hp is set to 1, AI tributes will ignore First-Aid kits, since everybody is always either at max hp or dead.

Food: Type "@SFood 1000", and tributes will start with double the amount of food (or however much you specify). Note when a tribute has more than 2000 food, AI tributes won't even bother pathing toward and picking up food items.

Inventory size: Type "@SInv 20", and tributes will have twice the amount of inventory space (or however much you specify). This should be at least 3 (else AI will get confused when deciding between weapons and other useful items), and at most 26 (since there's 26 letters in the alphabet).

Weapon range: Type "@SRng 16", and weapons will have double the range (or whatever range you specify). Make the range 20 or more in a small enough arena with torus wrapping edge setting active, and you can shoot yourself in the back of the head! ;)

Frame rate: Type "fFrameDelay True", and you will turn on a setting to display the time it takes to render the current frame in milliseconds (on 4th line from the bottom, right above the compass). 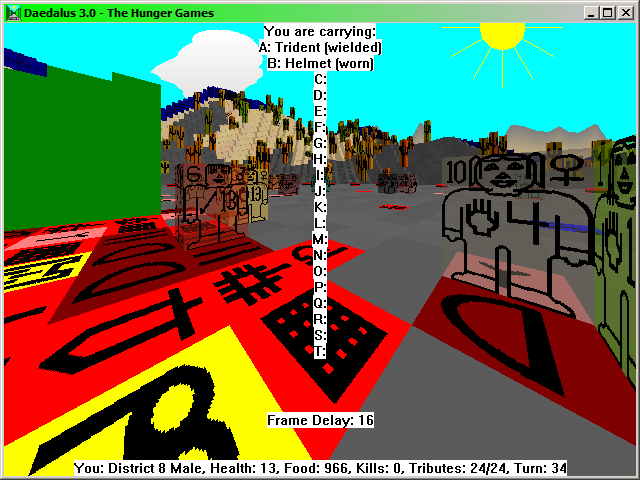 Pre-game alliances: You can define the aggressiveness of Districts, and which Districts are allied with each other. Type "SetString %ZAlly '!!34567890ABCM'" and the "Career" Districts will be just 1&2, instead of 1,2&4. Each District is determined by the character at that position in the string, with position #14 controlling Mutts. There are 3 codes: Any symbol like one of "!@#$^*()" means a District is aggressive and always runs toward the Cornucopia and Feasts. A capital letter or number like one of "ABC123" means a District's tributes randomly pick whether to be aggressive or timid. A lower case number like "abcdef" means timid and to always run away. Also, if two characters are the same, then those two Districts start out allied. Note there's no official mapping of characters 1-9 to D1-D9, but that is a way to make it easy to see which character position is which. For example, "!!3!567890ABCM" behaves identically in every way to "$$Z$YXWVUTSRQP". The behavior for the Catching Fire book/movie (with its Career alliance and Katniss' alliance) which has D1&2 aligned and aggressive, and D4,6,7,8,11,12 aligned and normal, is "@@XX5XXX90XX3M". 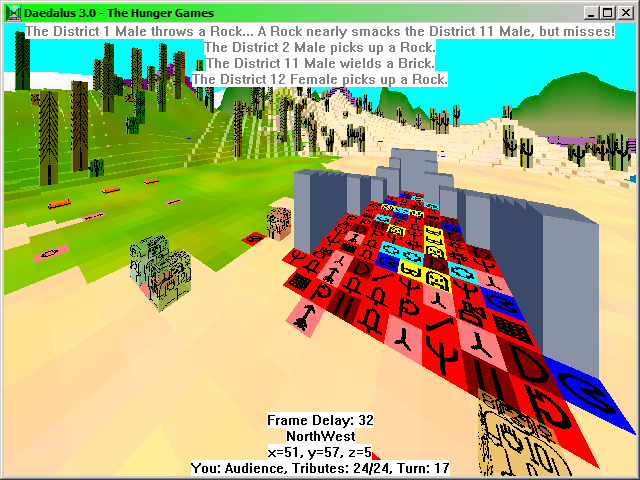 Indeed, this game is also frequently compared to Minecraft. Minecraft, Roblox, and Daedalus (which the Hunger Games is built on) are engines that readily allow custom or randomly generated environments, along with scripting to control player actions in those environments.