Important changes to the Imperial Guard faction from the vanilla game and new stuff. 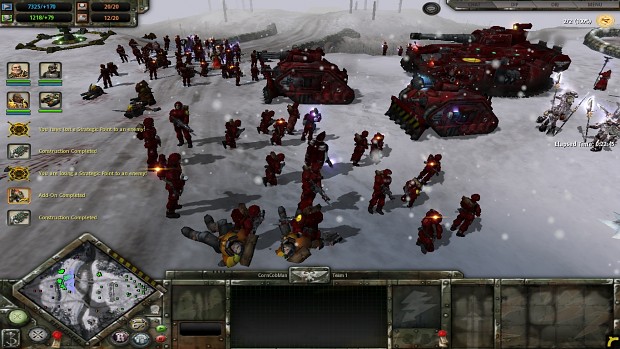 The Imperial Guard rely on large numbers of infantry or the support of their heavy armour to deal with their foes. Their squads are generally fragile, have long range and are cheap and quick to recruit and reinforce. Similarly their vehicles are generally cheap and can be built quickly. Their defensive turrets are strong and their forward bunkers can protect their troops with multiple weapons to drive attackers back.

Full Scale War now increases the health of most vehicles.
The Assassin Infiltration research has been removed and the Assassin now Infiltrates straight away.

Commissars squad health regeneration has been reduced. They now also reduce the damage received by the squad.
Commissar Execute no longer affects nearby squads, only the attached squad.
Kasrkin Frag Grenades also do less damage.
Basilisk Earthshaker Cannon does half as much damage but costs half as much to use.
The Marauder Inferno and Krak Bombs abilities have been removed and instead the Marauder drops Inferno, Krak and EMP Bombs automatically.

Guardsmen Grenade Launchers have been moved to tier 2.
Entrenched, Heavy Weapons Teams now start with Lascannons meaning they are anti-vehicle straight away and can upgrade to either Heavy Bolters or Autocannons. Un-entrenched they now have a medium ranged Mortar that does relatively low damage but have an area of effect and high knock back.

Conscripts have been added as a cheaper alternative to Guardsmen. They do not get upgrades or bonuses from researches.
The Combat Medic can heal squads more effectively than Commissars and they get Krak Grenades.
Guardsmen Sniper Squads have been added. They can use Infiltration and are effective against Infantry and do high morale damage but cannot upgrade their weapons.
Special Weapons Squads are an alternative troop choice to Snipers they can use grenades and have similar weapon upgrades to Guardsmen but deal more damage and are tougher.
Grey Knights have been added, they are good at ranged and melee combat and are capped at 1 squad.
Stormtroopers are an alternative choice to Kasrkins, their Hotshot Volley Guns are more devastating than Kasrkin Hellguns and they can use Martyr's Gift Medi-kits to temporarily boost their health regeneration and movement speed but they have more limited weapon upgrades.

The Medusa is a new variant of the Basilisk that does more damage at a shorter range. It is also more effective against buildings.
The Griffon is a short ranged mortar tank that has a quick fire rate and can disrupt a group of infantry effectively.

The Support Command Squad starting with the Imperial Colonel, having the ability to reinforce Vox Casters (improving squad accuracy), the Standard Bearer (improving squad morale), the Combat Medic (improving the health regeneration of the squad) and Guardsmen Veteran Bodyguards.
The Inquisitor has the ability to use Smite (to deal damage and disruption to a target squad) and can improve the morale of nearby units. The Inquisitor can also be upgraded with a Personal Teleport to quickly get in and out of combat. The Virus Bomb Exterminatus is a devastating ability capable of dealing massive damage and affected units will take damage over time and suffer crippling morale damage as well. The [ is an order to drop a [ that triggers a massive explosion, dealing damage to everything in the blast area..

The Stormblade is a new variant of the Baneblade with a massive Plasma Blastgun that does massive damage with a large area of effect.
The Stormhammer is another Baneblade variant equipped with two twin-linked Battle Cannons, four Lascannons and four twin-linked Heavy Bolters. It has more health and does more damage overall than the Baneblade but also costs more to produce.

Guardsmen are now able to use Smoke Grenades to provide defensive cover for your troops, affected units will take less damage. Be aware that the smoke affects all units in the area.

The Infantry and Mechanized Commands now have new Squad and Support Cap Increase researches instead of increasing the caps themselves. Each additional research requires an additional Infantry or Mechanized Command building.
New researches Recruitment and Advanced Recruitment have been added to increase the maximum number of squad members for Guardsmen squads.
Smoke Grenades research allows Guardsmen to throw Smoke Grenades to reduce damage received.
Researches have been added to upgrade most leaders can now upgrade melee weapons to Power Swords, Power Fists and ranged weapons to Plasma Pistols and the Command Squad Captain to upgrade melee weapons to Master Crafted Power Claws, Power Fists and ranged weapons to Twin Storm Bolter and Plasma Pistol.
Researches have been added to increase Grey Knight armour and to allow them to charge.

Two new doctrines have been added, one of which is chosen at the beginning of the depending on whether the player chooses to field more infantry or more vehicles.