An introduction to Humans vs Aliens vs Robots: War. What it is, and how to get started.

Humans vs Aliens vs Robots: War

A semi turn based strategy war game that takes place in a randomly generated cluster of stars and is fought between 2 or 3 factions. 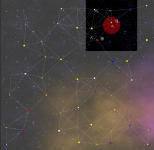 The goal of each faction is to completely eliminate all other factions and claim sole ownership of the star cluster.

The keys to winning a war for a cluster of stars are swift expansion, an efficient economy, a tough defense and a strong offense.

Upgrading captured solar systems is crucial to increase its economic output and offensive and defensive capabilities. This is done by creating and upgrading planetoid sized satellites called platforms. There are 4 platforms that can be created in any solar system:

Defensive Platform
Increases a systems defensive capabilities and allows the system to launch missile bombardments and minefields. Defensive platforms also increase the number of ships a system can generate in any given turn (the build pool).

Economic Platform
Greatly increases a systems economic output and allows for the creation of Asteroid Mines. Economic platforms also increase the rate that the system build pool fills up. 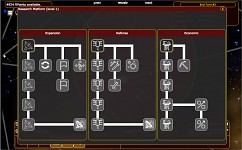 Creating Fleets
Crucial to capturing and defending new territories. Fleets can be created at any friendly solar system. As mentioned previously each solar system has a build pool. The build pool size is primarily determined by the number of populated planets, and the level of the defense platform. Any time a ship is added to a fleet the build pool size decreases. At the end of every turn the pool will begin to refill. Which is based on several factors, but primarily the economic platform level.


Fleets can be moved to other solar systems. It takes two turns for a fleet to travel to a neighboring unfriendly solar system. (Fleets made up entirely of corvettes can make the same trip in one turn).

All that being said, ships in friendly territory can travel instantly between systems. A fleet could even make multiple trips within it's own territory before the end of a turn.

There are 3 kinds of ships that can be added to a fleet:

If a fleet stays on an enemy or neutral solar system it begins the colonization process. By default it takes 3 turns to capture a neutral system or 4 turns to capture an enemy system. However there are research goals in the expansion tech tree that can drastically lower these times.

The best way to discover more about the game is to play it. There's a moderately difficult AI waiting for you to pick a war with it as well as an in game interactive tutorial...

Or jump in and challenge an enemy or two.

Play it now at War.humansaliensrobots.com