Important changes from the vanilla game with gameplay and features. 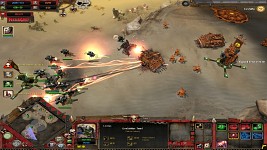 All units and buildings have a small detection radius so that infiltrated units that are too close can be seen.
All troops that can jump and teleport will cause disruption to enemy troops around the area where they land or appear. Deep striking causes disruption to all troops around where the strike takes place.
The tooltips for specific unit armour types are now shown instead of general Infantry, Vehicle or Building.

Commanders no longer take up squad cap (Imperial Guard, Dark Eldar and Orks). Most, if not all, Commanders can upgrade their weapons to be more effective in combat. When a Commander dies however nearby friendly squads suffer a penalty to their maximum morale and morale rate, making them easier to break. Generally damage received by Commanders has been reduced and they do more damage to Relic units.

Vehicles generally take longer to build than in the vanilla game but most have more weapon upgrade choices. Most vehicles now also have smaller footprints and therefore can move through smaller spaces on the map.

Relic units now no longer cost any squad or support cap and generally take longer to produce. Some Relic unit caps have been increased, e.g. 2 Space Marines Land Raiders can be fielded, 3 Tau Greater Knarlocs can be on the field at once, etc.
Relic units generally also have smaller footprints and therefore can move through smaller spaces on the map.

Some types of weapons do less damage against Heavy Infantry armour types and are more effective against normal Infantry armour and vice versa. For example Heavy Bolter weapons are generally more effective against normal Infantry and less effective against Heavy Infantry and Plasma Guns are generally more effective against Heavy Infantry while being less effective against Infantry. In such cases the tooltips for the unit or weapon upgrade indicate this.
Melee weapon hits will now cause units to suffer slower movement speed.
Tank and walker vehicle weapons are generally more accurate than before and have less fire on the move penalty applied.
All ranged weaponry except for artillery and certain weapons will now generally follow terrain so slopes and other terrain will affect how weapons fire. For example units on top of hills or higher on slopes will generally have an advantage as they will be able to fire better than units lower down. Objects on the terrain may also affect how weapons fire, things such as trees and walls will block weapon fire except for artillery and some exceptions.
All Artillery weapons also affect all units, even friendly units, so greater care must be take when deploying artillery alongside your troops. Artillery also tends to slow movement speed of the affected units.
Units that can attack being Infiltrated tend to do high morale damage.

Units that are stunned, either through abilities or certain types of weapons, will not be able to attack. They will still be able to move so that they can still retreat. A unit or squad that has been stunned will show a swirly red icon above their heads. Commanders are immune to stunning effects and Relic units will not be able to be targetted by abilities that stun.

Most abilities that prevented units from dying or taking damage no longer do so (this include Ork Fightin' Juice, Imperial Guard Fanatacism and Space Marines Word of the Emperor). Instead these abilities will reduce damage received to 1/3 of normal. Necron Phase Shift will still prevent damage or death but this is balanced by the fact that units under Phase Shift cannot themselves do damage.