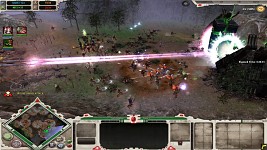 Fast but deadly, the Eldar rely on their long range and accuracy and their sneakiness. Their buildings can be used to quickly move across the map and their Commanders can be used to weaken groups of enemies before they are mopped up. Their vehicles have high damage and speed and can be upgraded with a variety of weapons but are fragile.

The Fleet of Foot ability has been removed and instead troops gain higher than average speed by default. Generally the Eldar infantry have been made more fragile to compensate for this and it is harder for the entire base to be cloaked or teleported to another location.

The Bonesinger teleport distance has been reduced to about half and its cost has been increased.Guardians can now choose to reinforce a Warlock, or either a Brightlance Grav Platform or Shuriken Grav Platform. These platforms have been removed as a singular buildable unit.
Fire Dragons mass has been reduced to about half of what it was before and their Fusion Guns now do high morale damage.
Warlock squad leaders no longer infiltrate until tier 2 (Soul Shrine).
Rangers are now capped at 3 squads instead of 1 and their damage, morale damage and accuracy have been greatly reduced until upgraded through researches.
Dark Reapers have been moved to tier 2, their damage has been increased and so has their cost.

Harlequins are now in a squad of 5, capped at 1 squad.
The Farseer's Psychic Storm ability becomes more powerful later in the game and weapons can be upgraded through the Commander health researches. The Farseer also detects infiltrated units.

Fire Prism health has been reduced significantly and can be built much earlier. They can no longer jump until Mobilize for War has been researched. They start with Scattered Beams, effective against infantry and heavy infantry but later in the game can switch to Focused Beams effective against vehivles and buildings and dealing knockback. They can switch between these two at any point thereafter.

Eldar buildings each now require addons for them to be teleported to another location.Webway Gates each must have the Shroud add-on completed before it can cloak nearby buildings, instead of a one-time research.

Storm Guardians have been added as a melee equivalent to Guardians. They can upgrade to Fusion Guns (to provide anti-vehicle fire) or Power Swords (to improve their general melee damage). They cannot reinforce Grav Platforms like standard Guardians.
Dire Avengers have been added as a tougher, more powerful alternative to Guardians.
Striking Scorpions have been added. Tougher, and slower than Banshees, they do more damage in melee and can can use Infiltration.
Swooping Hawks can jump around and pick off enemy units with their long range weapons and high speed but have low health.
Fire Dragons can now reinforce an alternative Exarch with a Dragon's Breath Flamer for dealing with large groups of enemy troops.
Dark Reapers can now reinforce an alternative Exarch with a Tempest Missile Launcher for some long range anti-vehicle support.
Shadow Spectres are a new long ranged anti-vehicle support troop choice. With Prism Rifles, they can deal heavy damage to enemy armour and the Shadow Spectre Exarch can also deal knockback with an area of effect with its Prism Blaster.
Support Platforms are a long range support unit, slow moving until Support Guardians have been reinforced. Starting with the Shadow Weaver, it fires much in the same way as Nightspinners and can be upgraded to either a D-Cannon effective against vehicles and buildings or Vibro-Cannon effective against infantry and heavy infantry.

Wraithguards have been added to the Support Portal, available when Annihilate the Enemy has been researched. Tough and extremely powerful they are slow moving (they can reinforce a Spiritseer Warlock to improve their movement speed), have short range and are very costly.

The Autarch has been added which can be recruited once all the troop Aspect Stones have been built for an Aspect Portal. He has the ability to throw Plasma Grenades and Haywire Bombs and has high weapon damage but is relatively fragile. He later gains the ability to jump and then teleport around the field of battle. He can also gain abilities to improve his melee damage and make him temporarily invulnerable.

The Wave Serpent transport has been added as an alternative transport with more carrying capacity than the Falcon which has had its capacity reduced.
The Nightspinner artillery tank has been added with long range disruption capabilities and its weapon slows enemy troops when it hits them.
War Walkers are light scout vehicles in squads of 3 that are fast and have powerful weaponry but are relatively fragile.
The Warp Hunter is a vehicle specialising in vehicle hunting, using its Distortion Cannon to deal significant damage against vehicles and buildings as well as disrupting troops.
The Firestorm, with its Firestorm Scatter Laser Array, is a light vehicle designed to hunt aircraft but is also effective against infantry and light vehicles.

The new alternative relic unit, the Scorpion Super-heavy Tank has powerful long range guns and a shield that reduces damage received. It can also upgrade its secondary weapon to Scatter Laser, Star Cannon, Missile Launcher or Brightlance.
The Cobra Super-heavy Tank is equipped with a single Distort Cannon (D-Cannon) which does massive damage and knockback over a wide area.
The Deathstalker Super-heavy Tank is equipped with a Deathstalker Prism Cannon which fire similarly to the Fire Prism but is more powerful and has a larger area-of-effect.
The Void Spinner Super-heavy Tank is equipped with a pair of Void Spinner weapons which fire similarly to the Nightspinner but is more powerful and deals high damage over time.
The Lynx is a heavy grav tank that is faster and more manoeuvrable than a Scorpion, Void Spinner or Cobra, but also less well armoured. Equipped with a Sonic Lance, it can be upgraded to a Pulsar to deal heavy damage to vehicles and buildings. Its hull can also be upgraded to a variety of weapons to be effective against almost anything.

Banshee Exarches now upgrade their melee weapons with the Call of War research.Falcons and Wave Serpents can now upgrade to Scatter Laser (a rapid firing laser good against Infantry), Star Cannons (for damage against Heavy Infantry), Missile Launchers (for light anti-vehicle and disrupting enemy troops) or Brightlances (for high anti-vehicle damage).
The Vyper can similarly upgrade to a variety of weapons.