Storytelling is an important part of Single Player gaming, how else would series like Half-Life or Quake have drawn us into there worlds? This article takes a quick look at common techniques used in games and how best to implement them.

Storytelling is a important part of Single Player gaming, how else would have the Half-Life series or Quake drawn us into there worlds?

What many mods and games miss is how to correctly balance cut scenes and game play because lets be honest, even the most beautiful cut scenes can be a pain if they interfere with the gameplay. There are two common storytelling techniques modders can make use of, cut scenes and scripted sequences. Today I want to look at the positives and negatives of using these techniques.

The question for most developers is how much is too much story? In the modern day it is more than possible to make close to film quality cut scenes. Many players prefer to play the game, not to watch it. So it is important to know how and when you are going to implement any means of story telling.

One problem with cut scenes and scripted sequences is finding the correct placement to initiate the story telling, I find the best place is either at the beginning or end of the level, or at a convenient break in gameplay and action but must not ruin player immersion, cutting up gameplay and slowing the pace.

A good example of this is the Half-Life series, not once are you taken out of Gordon Freeman's head, or hear his voice, making the player really feel as if they are Gordon. Also in this series all the story unveils in front of the player, not around him.

Half-Life Series made fantastic use of scripted sequences to tell the story.

Scripted sequences can be very immersive, but the largest problem with this technique is that it
takes much more work to tell a character driven story because it is difficult to explain the players emotions, likes and dislikes. Also it is only by chance, or very good level design that you have the players attention during the sequence, It is far to easy for the player to be spending time at the other side of the room trying to jump on a NPC's head instead of listening to the NPC that is telling you what to do next.

While cut scenes can take away from immersion they also can tell a story much easier than scripted sequences and also be of a very high quality even if the actual game is shockingly bad.

On a last note, the most important things for developers to remember is that the gameplay is secure and solid, and then move onto giving your game/mod narrative to add to the players experience, and making sure it doesn't detract from the experience. 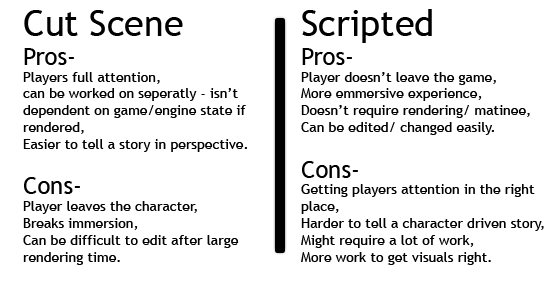 Indeed, simple, yet very informative. Thanks for the update!

ok no idea why you mentioned quake :p
it doesnt even have cut scenes xD

No but it has plenty of Scripted Sequences that tells a story and explains what's going on.
Get it right man.

Very informative, thanks a bunch for putting this up :)

imo a good mix of both does the job well

"It is far to easy for the player to be spending time at the other side of the room trying to jump on a NPC's head.."

Another pro to cut scenes is that the player often has the option to skip them. Can't skip a in game sequence in hl2.

Quake 1 had no cut scenes, scripting, etc. Q2 had simple videos that just said "you're entering next map". Q3A the same. Q4 had scripting, no videos.

HL1 is what you should of discussed more, HL2's scripted scenes were more like a boring novel vs actually interesting, in both presentation & dialog. HL1 was near fantastic.

Prey went one step further then most games & if you walked away from a scripted scene the NPC's would actually call you back or something might happen. I don't think any other game has done that!

Duke 3D, imho, has the best of both worlds: duke has scripted responses to specific situations & had great pre-rendered cut scenes. Halo 1 (never played the other two) falls right behind it.

Bad part about most games's scripted sequences is that you can't skip them. HL2 again, you're stuck listing to the same boring speeches every time you play. I know there's some other games that use scripting but they let you skip with the ESC key, or something similar.

Saying cutscenes breaks immersion is like saying eating a bad piece of cake means you'll be a vegetarian. Immersion means "absorbing involvement". Being absorbed in the game has little to nothing to do with a rendered scene or a "real time" scripted sequence is used. If it was then nobody would ever of enjoyed games before HL1. HL1 & others kept you absorbed in the game while the scripts were playing out. That's the important part. Many of those could of been replaced by cutscenes and it wouldn't of made a difference: you WANTED to see what's happening. You were given the choice and you wanted to. Just like a cutscene from a CnC or Warcraft game: you wanted to see what's happening. You could skip it but you didn't want to, it immersed you more in the game by watching.

I wouldn't say neither is harder to setup. There is no difference in the basics, you're setting up a 3d stage in a virtual environment. The only difference is one is prerendered, the other is not. Look at cutscenes from CnC: Renegade or Serious Sam 2. All of those are pretty much identical to what the game engine produces, for one reason or another it was decided a prerendered movie would be used. Rendering time is almost a moot point: if it can be shows in real time you can render (record, whatever) it to a file in real time, at worst.

There's also the assumption you're making that a cutscene can't be real time. doom 3 had real time cutscenes. Some times from the player's POV. Those are completely scripted just like HL2's are but you loose some/all control. HL1/2 have similar areas when you can't do anything but look around (tram-like sequences). Bioshock had very similar scenes play out like doom 3 did where the player loose some/all control & things happen. All real time.

Cut scenes do break immersion, suddenly having the game stop, and watching yourself kill everyone definatly makes the player less involved.
Its mainly down to personal opinion whether you like or disklike cutscenes, but from a general public oppinion players would much rather see the story unfold around them, rather than watch something happening 300km away.

"There's also the assumption you're making that a cutscene can't be real time." Your quite right, i did assume that people would be making the cut scenes in a 3D app, but I'am fully aware that most engines now do offer ways to have a cutscene in realtime, what you forget though is by doing this you would likely to have to animate more and work on cinematics whereas with Scripted you would be looking from the POV of the character.

But your quite right, the gap between cutscenes and scippted sequences is slowly filling, and I also could have gone in a thousand more options players have, but that is not the point of this article.

I hate when cutscenes are rendered outside of the engine, or are faked to look like they are in-engine, like Unreal's (3) cutscenes. Whoever downloaded Unreal 3's uncooked cinematics will have seen how catastrophically chaotic and not-working they were. No idea why they released them, unless to bring shame to themselves.
Generally I think cutscenes are a good idea, but often the dialog, or just the translation is so badly written it makes me laugh, until I want to cry.

article is good to clear somethings!
One thing are you reading my mind! "It is far to easy for the player to be spending time at the other side of the room trying to jump on a NPC's head instead of listening to the NPC that is telling you what to do next."- that was exactly what i did in halflife 2, in the momment was just exploring the place so i had i little fun.

What i would like to know is how to make a cutscen or something like that if i want to make a singleplayer mod ! help please !

Yeah, in HL2 at the beggining when G-man came on I shut off my computer because it was not rendered. OK
I'm just kidding I love scripted animation better than cut scenes. It keeps you in the game, you do what you want to do, and you can mod characters, etc.