First in a series of gameplay techniques - how to do effective rushes as certain factions, how to defend against them. This one is on the double Dragon Tank Rush as China.

Today I'm going to be doing the first in a series of gameplay techniques - how to do effective rushes as certain factions, how to defend against them and so forth.

This one is on the Double Dragon rush - it's a basic technique, all it requires is playing as any Chinese general and getting the Optimised Production GP. This GP unlocks the ability to produce vehicles and infantry in pairs from the War Factory and Barracks respectively, with a 25% reduced build time in total.

We can use this to produce a pair of Dragon Tanks from a War Factory. 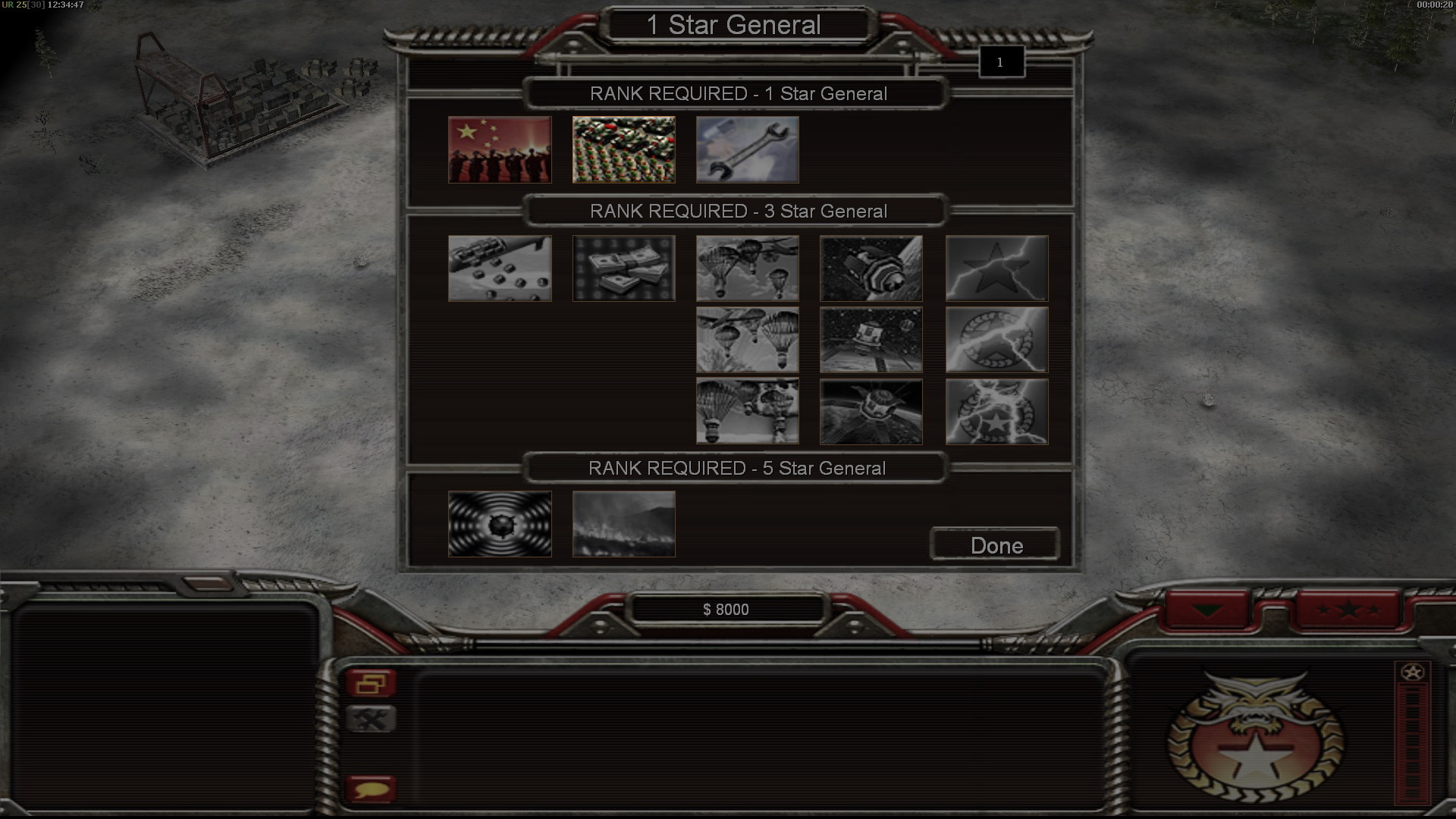 Select the Optimised Production Button in the bottom right hand corner of the War Factory. In this case, I am playing as Red Army General because I can follow up with Assault Troop Crawlers and Infantry to heal my dragon tanks and keep my advantage over the enemy. However, it's not necessary to pick that General. 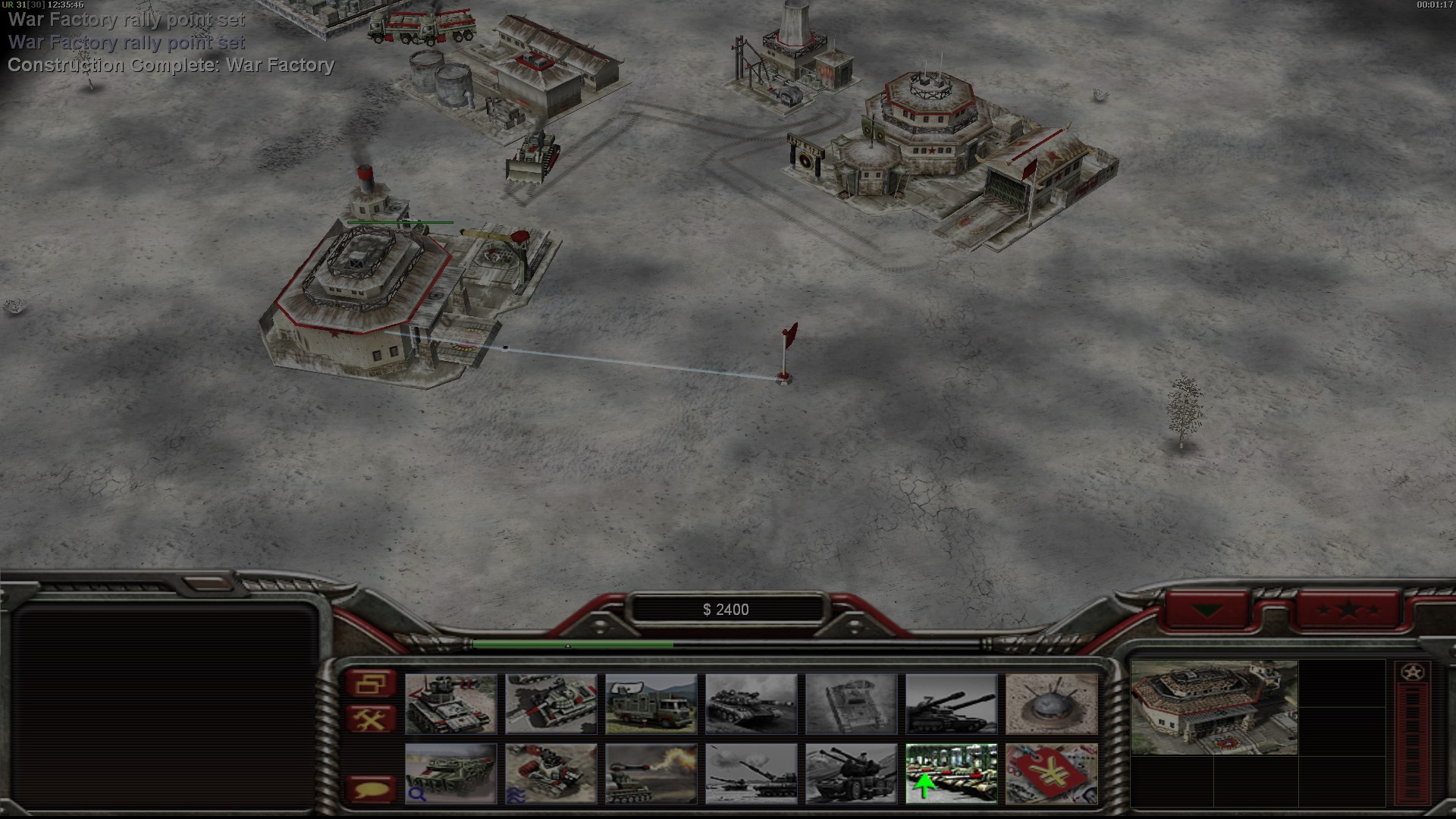 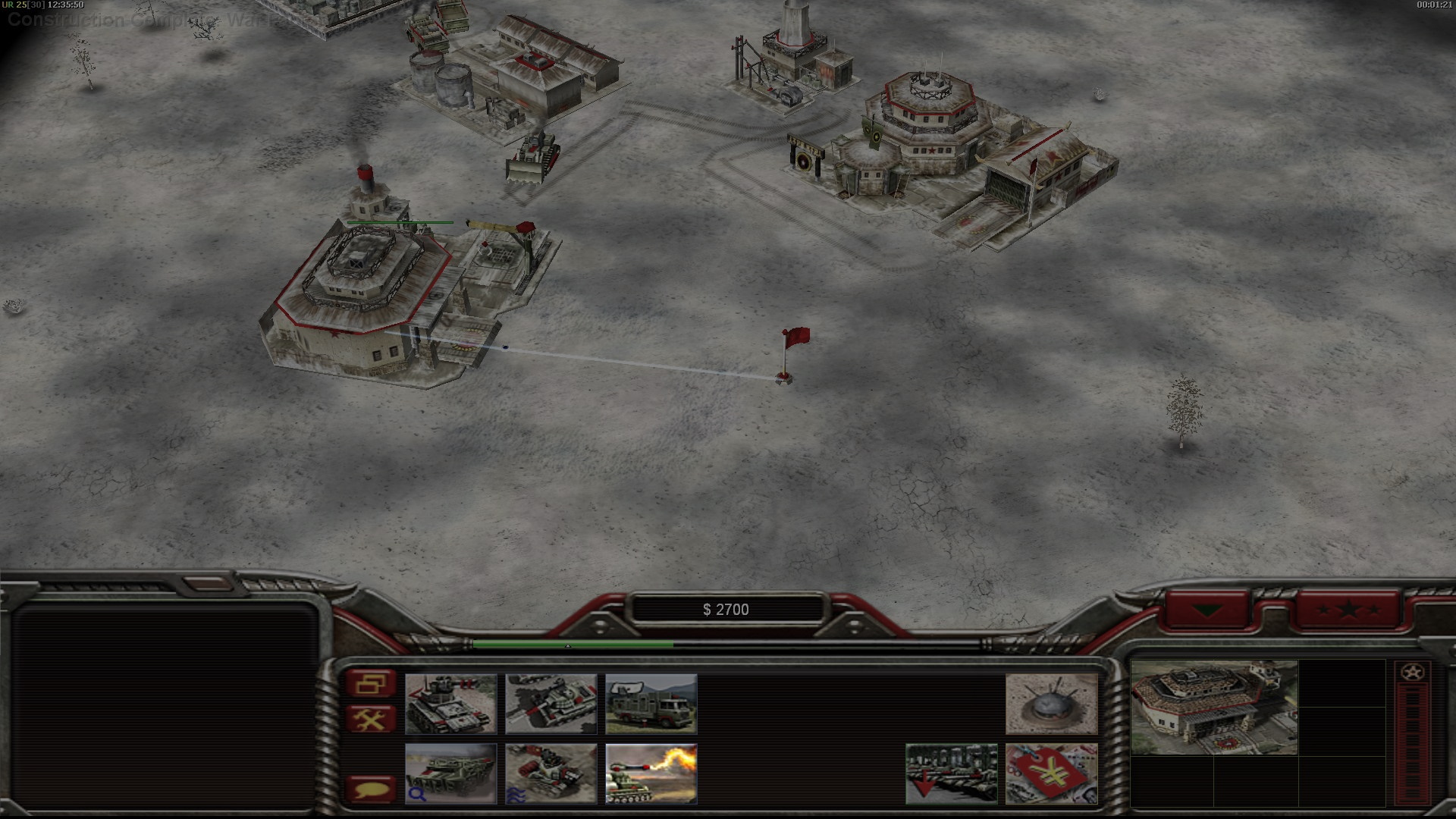 After building your Dragon Tanks, try and flank the enemy from two sides of the map - going for Supplies, War Factory or Airfield can be really beneficial, but you have to watch out for enemy tanks or aircraft as they can foil your plan quite easily. If there are Dozers, try and get those too. 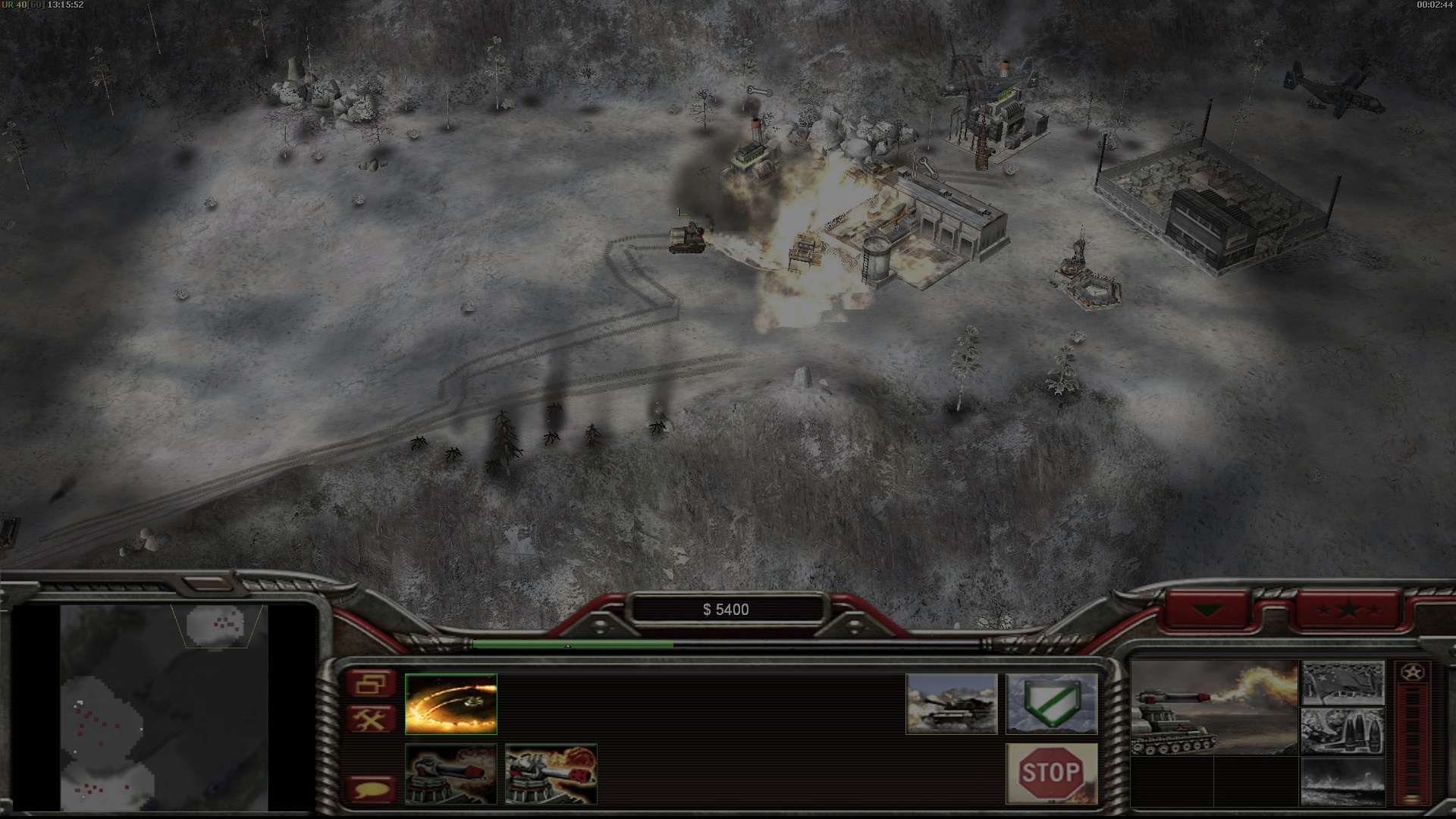 Use the Fire Wall ability, it deals an extremely high amount of damage to almost all targets. 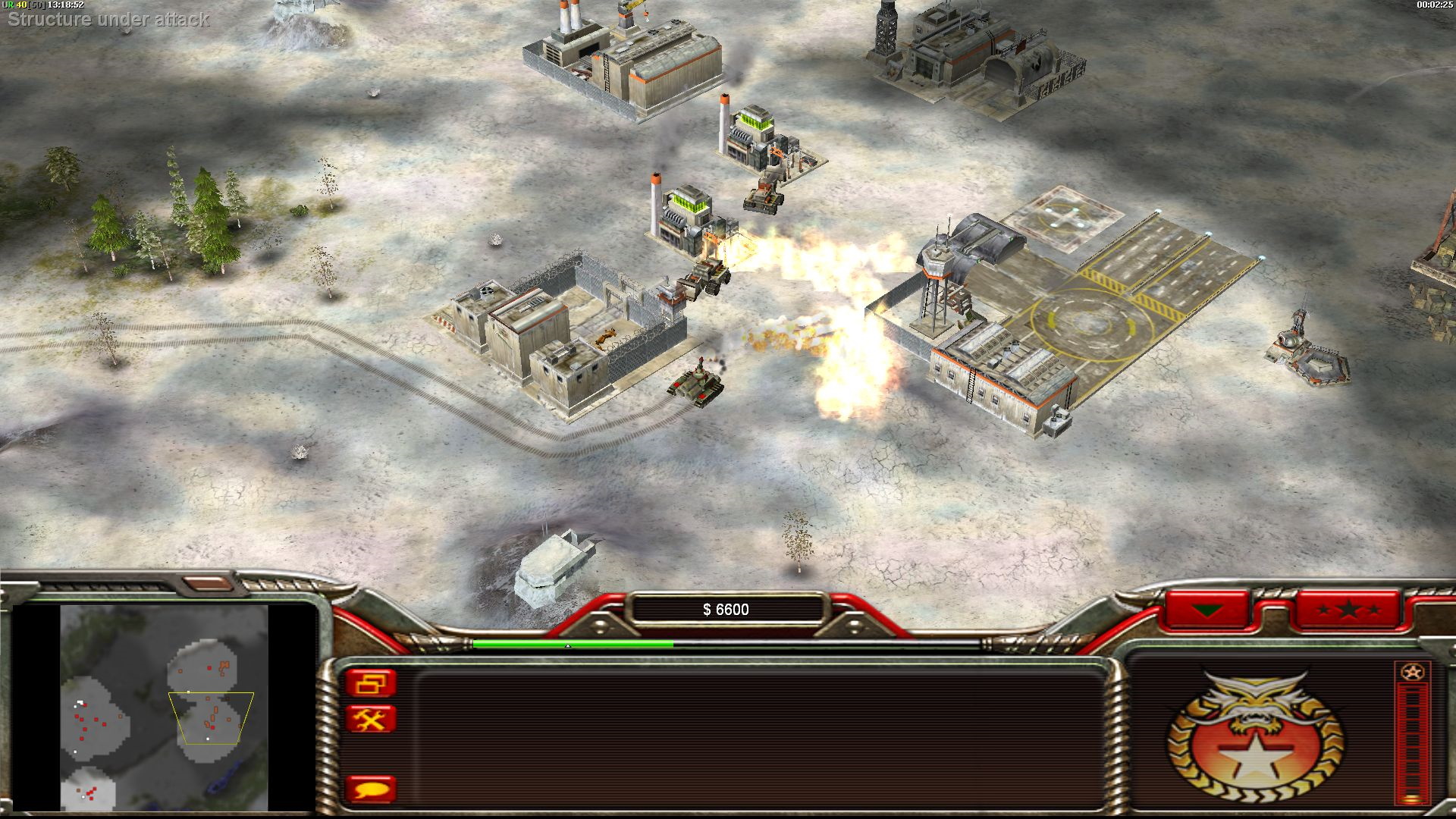 Flanking from two sides makes it hard to defend, that's the beauty of the Double Dragon rush - you put your opponent in a difficult situation as he immediately has to decide which one to kill.
Alternatively, it may be in your interests to push with both Dragon Tanks on the same position, but you run the risk of being countered then and there, without dealing any damage to your opponent.

If you have done the rush correctly, you will have destroy a couple vital buildings, probably a Supply Center & a Power plant or a War Factory.
However, it's almost inevitable against a good opponent, that you will lose your Dragon Tanks to any existing units in the base.
So the follow through is actually the most important part of the strategy, and it depends entirely on your own preferences and the general you are playing as.

Here are a bunch of different supplementary parts to this strategy:

Dragon Tanks are extremely susceptible to early-game jets and helicopters like Raptors or Hellions. As such, after building and attacking with your Dragon Tanks, it might be a wise idea to queue up Optimized Gattling Cannons and/or Mogwai (Secret Police General) and guard the nearest airfield, where applicable.

You may also consider getting the Chain Gun upgrade which will help greatly if your opponent is extremely keen on going all aircraft.

It's easy for your opponent to predict that you are going to rush Dragon Tanks and they can very simply produce one or two Crusaders or maybe a couple Rhinos. If you know that they will likely try and defend themselves with Medium Tanks, then I suggest getting Tank Hunters, which you can garrison inside of either Assault Troop Crawlers (Red Army General) or Praying Mantis (Secret Police General) for them to shoot from inside.
Alternatively, you can cut time and money by mass producing them via Optimised Infantry Production from the start to aid with the initial rush of the Dragon Tank; this obviously has the downfall of being easy to kill.

Following on from the last point, it's sometimes easier to counter tanks with tanks. Simply get yourself a couple Battlemasters or Hoppers to follow the Dragon Tanks.
In BR, Hoppers actually use Flak which makes them equally good against all targets. However, this does mean they need to be massed before they can deal any decent damage to vehicles. On the other hand, unlike Battlemasters, they are really good against infantry which helps them cover all the Dragon Tank's weaknesses.

Luckily, Hoppers also come with one transport slot which allows you to combine them with Tank Hunters or Pyros or even Red Guards for increased effectiveness.

If you are feeling particularly ambitious, you can even try and get a second pair of Dragon Tanks. Although... it can get a bit predictable, especially if the first pair was a failure. If you managed to destroy most of the base with first pair, and the second pair is produced quickly and manages to follow up on the first pair still alive, then you can sometimes end the game with this strategy.

The second to last follow through that I am going to cover, it's generally the most "loose"; by that I mean it's unlikely that it will exactly follow the Dragon Tank rush but it's useful to know nonetheless.
You will need to produce an Airfield directly after building the War Factory to produce the Dragon Tanks. As Red Army General, build a Helix (or two) and get the Bunker upgrade. Fill the Helixes with Tank Hunters and Pyros, then send them to the enemy base. Be extremely careful of anti air defences or units. It'd be best to destroy these with your Dragon Tanks earlier if you are planning on following up with Helixes. This strategy can sometimes end the game but it is risky.

As Secret Police General, get a couple Stingrays and use them to capture buildings and disable dozers. They are quite mobile, so with some micro, you can disable Supply Trucks, capture War Factories and really screw with your opponent if they can't get a counter in time.

As any of the Generals, you can get MiGs (or Advanced MiGs), and use them to snipe dozers and infantry.

This option is best for Special Weapons General, but can also be useful for Red Army General.
Build the Propaganda Center and immediately follow up with one of the following:

Han Gunships (Special Weapons General) - This unit can be useful for vehicles and harassment, plus it can be upgraded with Nuke Loadout if you are really feeling destructive :D

Hellfire Bombers (Special Weapons General) - These guys can easily destroy all ground units with their nuclear bombs and leave radiation, which is great for blocking barracks production.

Volunteer Squads (Red Army General) - They are built extremely quickly and are good against infantry, buildings and vehicles.

This rush might seem a little hard to counter, but rest assured, where there is a will, there's a way.
I will cover each faction a bit, detailing some exact strategies.

As USA, you will want to produce Acolytes/Crusaders. Dragon Tanks are extremely weak to Tanks, dying to an Acolyte in 8 hits and to a Crusader in 6 hits. It's as simple as that.
As Tank General, you might want to also go for Bradley with Missiles.
As Airforce General, you might want to go for Hunter Killers + Drone Production Center (to reduce cost).
As Covert Ops, it might be beneficial to go for Humvees filled with Missile Defenders (as they can shoot from inside), and kite the Dragon Tanks.

Battlemasters, Mass Hoppers, Tank Hunters in Fireports like Helix, Assault Crawlers, Mantis or Praying Mantis are all counters.
China can build a bunker and fill it with Tank Hunters if you need.
Place mines on vulnerable buildings.

As GLA, you will want to produce Scorpions and rush Scorpion Missiles upgrade from the Supply Center. GLA also has the added benefit of being able to use Tunnels to defend themselves. You might even consider going for Hijackers and trying to cap the Dragon Tank, and use it against your opponent. You can also get an Airstrip with a Plague Duster.
It's also extremely easy for GLA to counter-rush with something like Tech Terror or Early Dusters (which I will cover another day) or even Base Trade.
A base trade is when you leave your own buildings to get destroyed and focus on trying to kill their base in return (effectively trading bases) - and building your own base in his place.
The reason it's effective as GLA is because they have the tools to quickly destroy buildings, faster than any other faction, and they have Command Truck which keeps them alive no matter where it is. Finally, you can always sneak a couple workers out to keep yourself alive.

Like the other factions, I'd suggest getting Rhinos early - which can kill a Dragon Tank in 6 hits like the Crusader. You can even go for Advanced Manufacturing upgrade and get an early Ogre (more on that in another article)
You can also go for Hellions or Twinvolts from a Helipad if you can. They are really good against Dragon Tanks so you will be able to defend yourself really well.

ECA has a lot (A LOT) of options, but in a quite hasty list, they include:

Building Guard Towers / Tank Bunkers / Gun Turrets around the base
Fortifications with Panzerfausts *careful as these are suspectible to being burnt out.
Getting Warhounds as Royal Guard General.
Getting Leopards, or building a Deployment Zone and ordering Leopards
Building Tiger Gunships and using them to guard the base.
Purchasing the Cheetah Gunship upgrade on your Region Command
Filling your Region Command with Panzerfausts.

You can see me pull off this rush on Jundiyy in this video as China, General Chen against USA Ground Forces General Bradley: