Important changes to the Chaos faction from the vanilla game and new stuff. 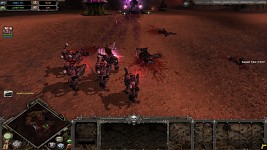 In short tough, less numerous and expensive, their troops are like mini-elites with more damage and more health but at a high cost and build time. With a mix of troops, powerful weapon upgrades and daemon choices and abilities they can be strong in ranged and melee combat.

Chaos troops are more survivable and can take a lot more punishment and therefore the faction as a whole suffers less from Requisition bleeding from constant reinforcements, compared with Chaos in the vanilla game and some other factions. They, however on a unit by unit basis, are generally more expensive than they were in the vanilla game, and as such they are very costly to reinforce both in terms of resources and time.The lower squad sizes and longer reinforce times means that they can be out-squadded by some other factions and there can be focused on individually so it is important to be aggressive.

Chaos Space Marines can no longer Infiltrate. This is to offset their power and survivability.

Possessed Marines now have monster medium armour and are more tough than before, more costly and less numerous. Relative to the overall squad strength, their health has been increased significantly and move slightly faster than before.

Similarly most Chaos weapon upgrades are now roughly twice as expensive and take twice as long to obtain than before but are twice as powerful. CSM also have more weapons choices,
Flamers for destroying enemy morale and dealing with groups of enemy troops and Missile Launchers for mid game anti-vehicle damage. The Heavy Bolter now is in tier 2 and the Plasma Guns are now in late game. The increased damage for weapons upgrades means that for CSM Missile Launchers it may only take 1 or 2 volleys to destroy an enemy vehicle which make them very potent long range vehicle counters.

The Daemonic Flames research bonuses have been split and the old vanilla Dawn of War researches have been restored to further boost their speed, melee damage, health and ability to upgrade to Daemonic Flames, but only available late game in the Daemonic Pit. The modifiers have been reduced to offset the increased relative initial strength of the Possessed Marines squad.

In the Desecrated Stronghold HQ building for Chaos are 5 new researches, Mark of Chaos Undivided, Mark of Khorne, Mark of Nurgle, Mark of Slaanesh and Mark of Tzeentch. These affect which troop choices are available as well as differences to the strengths of some units and availability of weapon upgrades.

Marks also allow Cultists to Worship to grant bonuses to nearby units depending on which path has been chosen.

Renegade Militia are a cheap, disposable ranged troop choice that are weapon but effective in numbers. They start off with inaccurate Autoguns and can upgrade to a variety of ranged weapons Flamers, Grenade Launchers, and Meltaguns to be more effective against most targets.

New Havocs can be requisitioned with anti-infantry long range Heavy Bolters as standard, they can upgrade to Missile Launchers or Lascannons to deal with vehicles from afar or Autocannons to deal with infantry from a safe distance. Their ultimate weapon upgrade is the Volkite Culverin which deals sustained damage against enemies at long range, causing them to ignite and burn for several seconds but are limited to 1 per squad. Havocs cannot capture or decapture enemy strategic points.

In addition to the powerful multi-weapon ranged powerhouses the Obliterators, Chaos have new Chosen Terminators with focus on melee power but with competent ranged power. Mutilators are a dedicated melee variant of Obliterators.

A new artillery unit, the Vindicator has been added with shorter range and more destructive power better specialised to better break through defensive lines.
The Chaos Dreadnought is a melee powerhouse starting with Twin-linked Heavy Bolters and a Chainsword with multiple weapon upgrade choices for either arm. It has higher health than a Space Marine Dreadnought and higher melee damage but costs more to requisition and its ranged weapon damage is slightly lower.

The Warpsmith is a new commander unit with the ability to build and repair structures and allows nearby vehicles to slowly regenerate health.

By selecting one from a group of new late game researches, the player can choose between 6 relic units to deploy.