How to set up the TOW Missile system for Black Mesa (Source).

Setting up the TOW is very simular to the way the 50. cal works. The difference is that the TOW's ammo is fed manually by the player.

2. Create a brush behind the TOW model in which the player can stand and turn it into func_multiple.
Name: tow_control
Tag Flags: Clients

3. Create a brush ( l:64, w:16, h:8 ) with the toolsinvisible texture and make it cover the length of the barrel. Turn it into a func_tow. Make sure the origin of this brush is moved to the middle of the TOW model, right at the pivot where it can rotate and move up and down. Turn the angle in the direction of the brush according to the direction of the model.
Name: tow_launcher
Parent: tow_launcher_model
Control Volume: tow_control

4. Now place a few item_tow_missle entities around. These are the missles to feed into the launcher. You should be left with something simular to this: 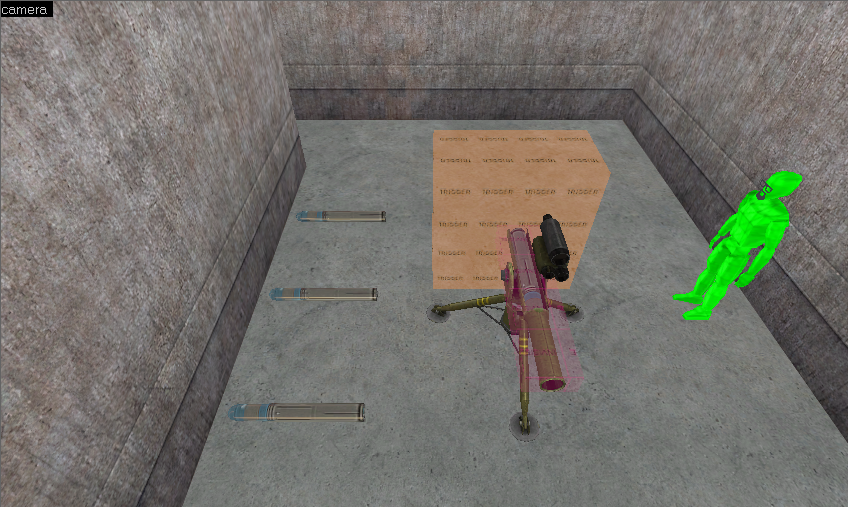 Compile and witness the destruction!

5. If you want the TOW to have more ammo, you can set up a missle spawner. Create an npc_maker.Name: tow_spawnerNumb. of NPCs: 50Class name of spawned NPC: item_tow_missile (type, don't select from menu)Now go into the func_tow's output and enter:OnFire > tow_spawner > Spawn (Delay: 3)

6. You can also set up the TOW to be NPC controlled, although only the player can reload the weapon, so enemy grunts can only fire one shot, which makes them pretty useless. In theory you could set up a friendly NPC to control the launcher, so the player can reload the weapon while he fires, although it seems Barney doesn't want to control the TOW in the current version of BM. You might be able to come up with some clever solution like a model replacement of a grunt with ai_relations or something. If you really want to set up a NPC controlled TOW, refer the the example RMF below.