Here's some veeeeeeerryy!!!, important stuff, like what to if one of your dominions can't colonize for various reasons (i.e, not a secondary power/not enough colonial power/points) by DeadHead28xxx (just DeadHead28 on steam)

Posted by DeadHead28xxx on Aug 9th, 2021 - Intermediate Other

I. The module In your launcher should be called "Converted - Skeebadabadabap" (w/out the quotation marks). 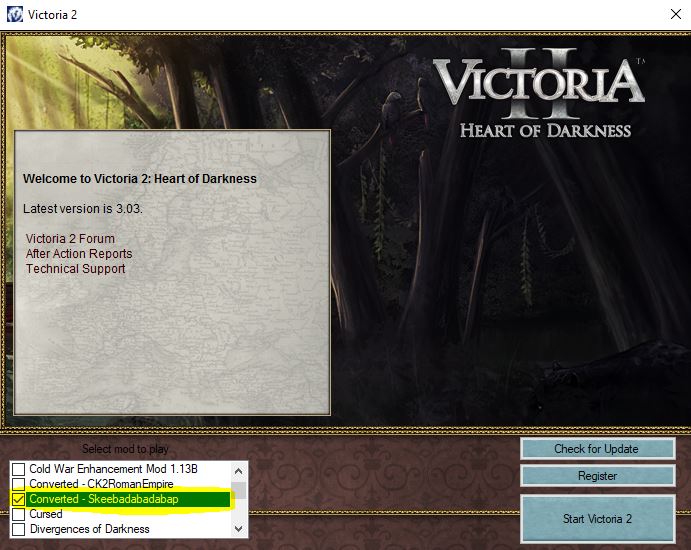 I. You'll notice that a lot of the GPs (Great Powers), & maybe some SPs (Secondary Powers) have at least some of their colonial power/points tied up In maintenance (especially Fredrickeslande & Britain), so what you'll have to do Is simple, advance your naval tech (when you have a good chance to do so) i.e, better dockyards/naval bases, advance most of your tech as you would normally & (this one Is kind of optional) build enough ships to reach your supply limit, that'll give you more colonial power.

II. If you don't want, say.... Canada getting independent (via independence war event, and If you don't want to fight a costly war against them & still want to rule them In some form, you get forced by said event to grant them dominion status when you're not done colonizing them, or If they don't become a secondary power In a specific amount of time/when you want them to) before the rest of that uncolonized terr. belongs to you (eventually them), & this goes for all colonies that haven't reached their true colonial territorial potential before gaining dominion-hood and/or independence, well then If you don't want that to happen; you should absolutely NOT click/activate the "Post-Colonialism" decision, until It Is absolutely necessary (note that you can still release nations yourself anyhow, which Is absolutely fine), "necessary" being that once the colonial scramble for Africa (& The World) (1870's/80's - 1890's/1900's) Is over, or maybe If you want: you could activate the decision either before (late 1830's - all of the 1840's/50's/60's or 1870's are not recommended), during (recommended) or after (also recommended; 1890's+) & heck, whenever you want to do so (If you're testing/playing multiplayer, make sure everyone agrees when the decision will be activated). 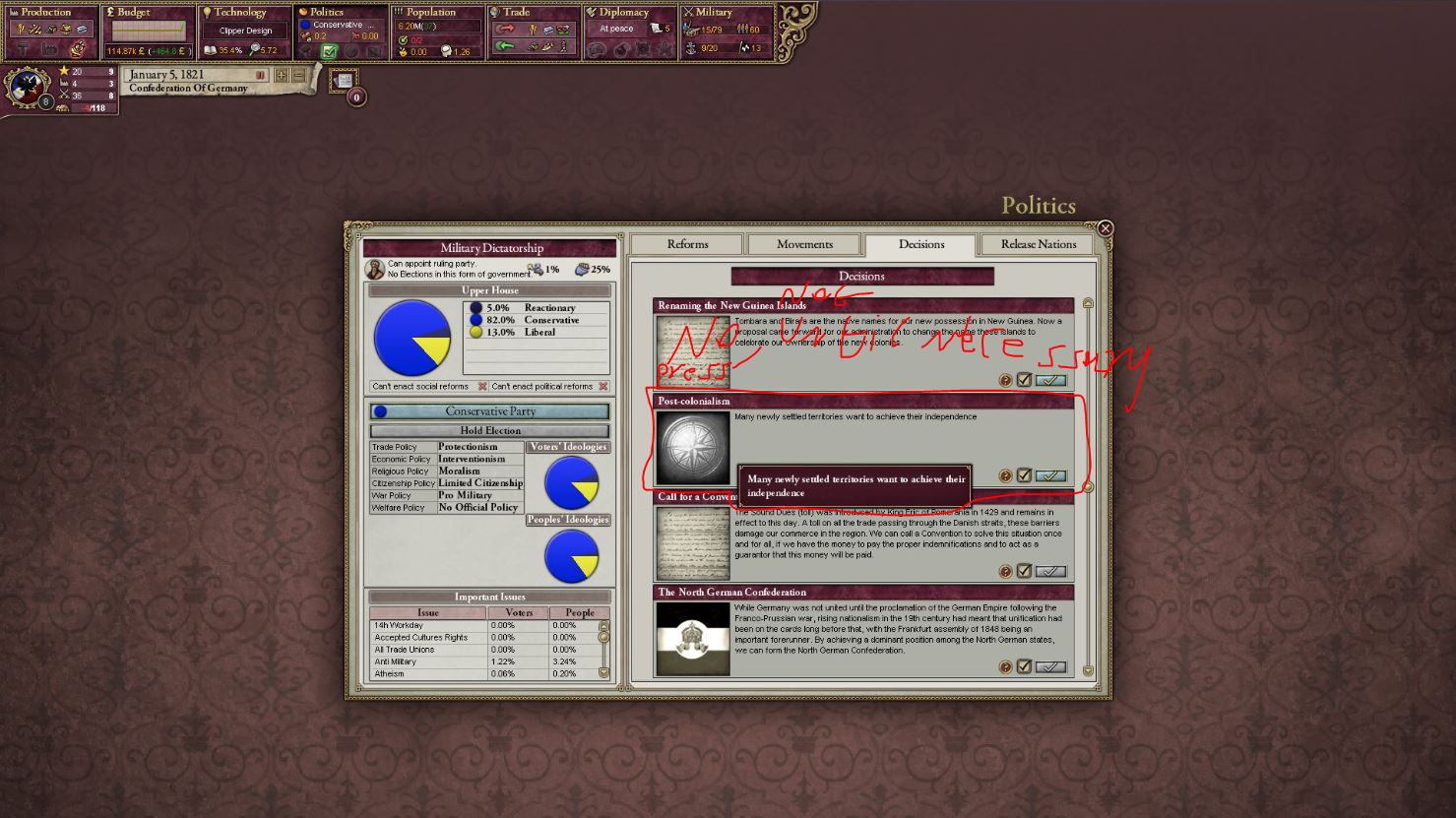 III. If that didn't work, or you just didn't care and chose to activate the decision early. Well here's another alternative (& another problem: If one of your dominions can't colonize for various reasons i.e, not a secondary power/not enough colonial power/points):

Yes you heard me right; cheating!, NO... er I mean handing land to your dominion-ized colony thru commands, (no I'm not a cheater mate well most of the time I'm not, I promise :) fyi here's how:

I. You (obviously) find the provinces, (& the tag for the nation you want to give It to, you can find the tags In the mod folder: \[:Ur Vicky 2 mod directory:]\Skeebadabadabap\history\countries\ & search the name of the country (or If you can't find It like that look for context clues; i.e the nation's location/region, at the accepted cultures & at the religion of that nation In game and try to find that In one the txt files and If any of that worked you now know the tag of whatever country you are toying with; It took me a little bit to find the tag for United Provinces (Fredrickeslander La Plata) and It was LPL. 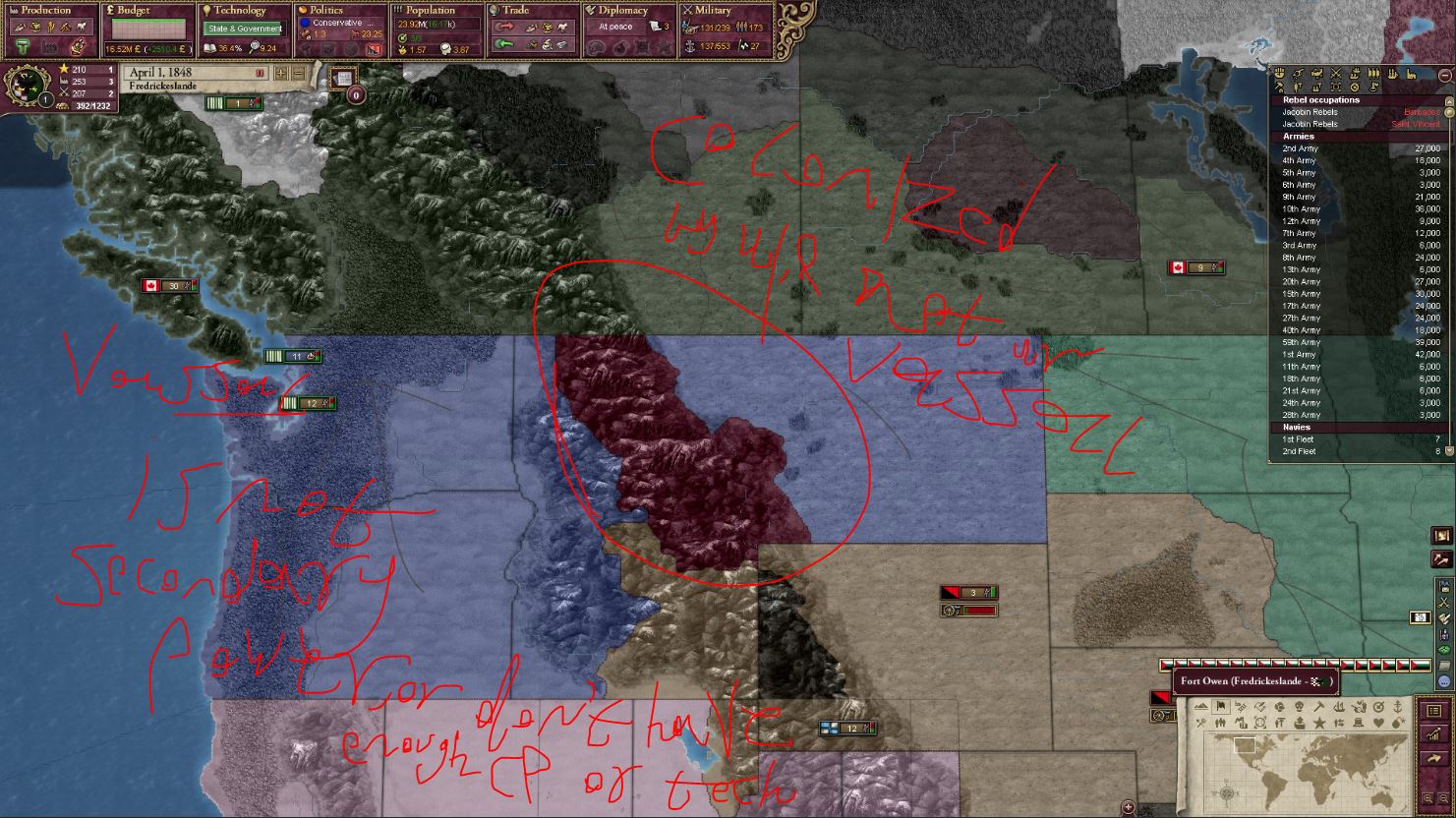 II. You open the console and enter the command named "provid", 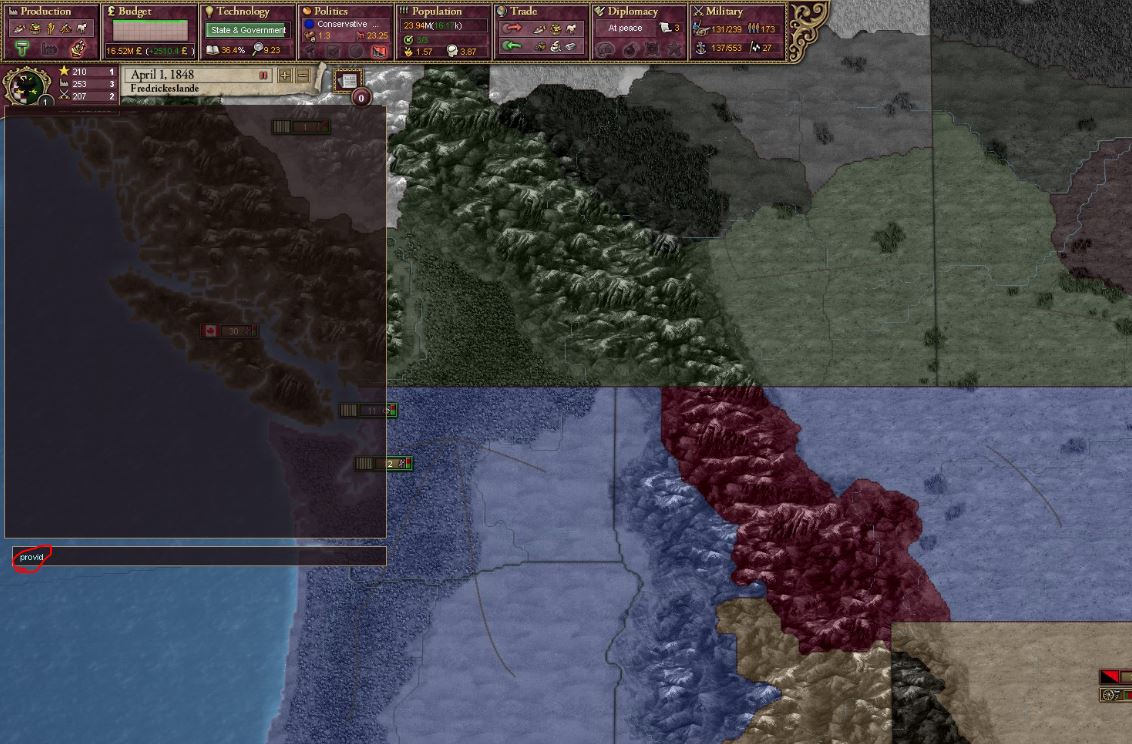 It gives your tooltip a "magic ability" to see the province ID of a... well.. province. 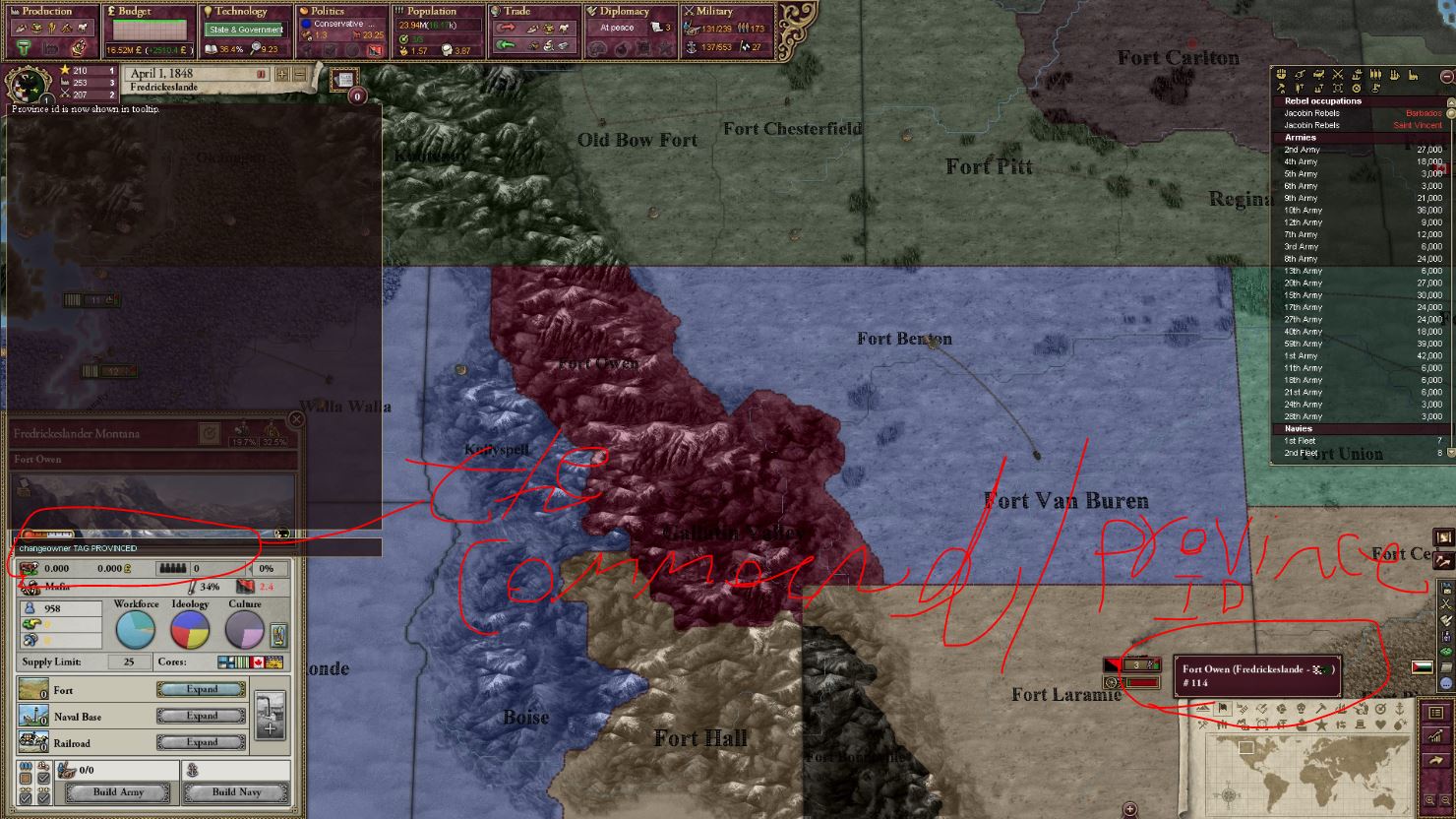 Then ya enter the command "changeowner" followed by a space, then enter the tag of the country you want; In this case: "X57", after that you press space again & enter the province ID, here It's: "114", 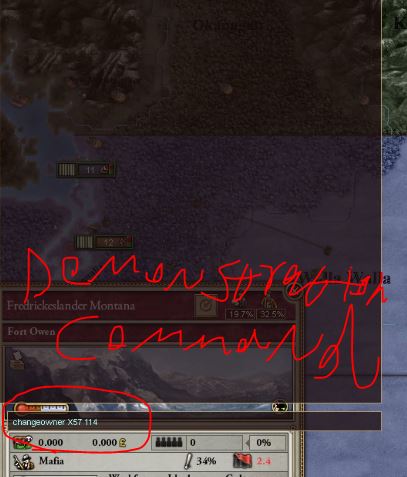 So now you've typed "changeowner X57 114", press enter; then If there's another province that needs to go to one of your dominions, or If you want to clean up some borders a little, cheat or otherwise, just lather, rinse & repeat. 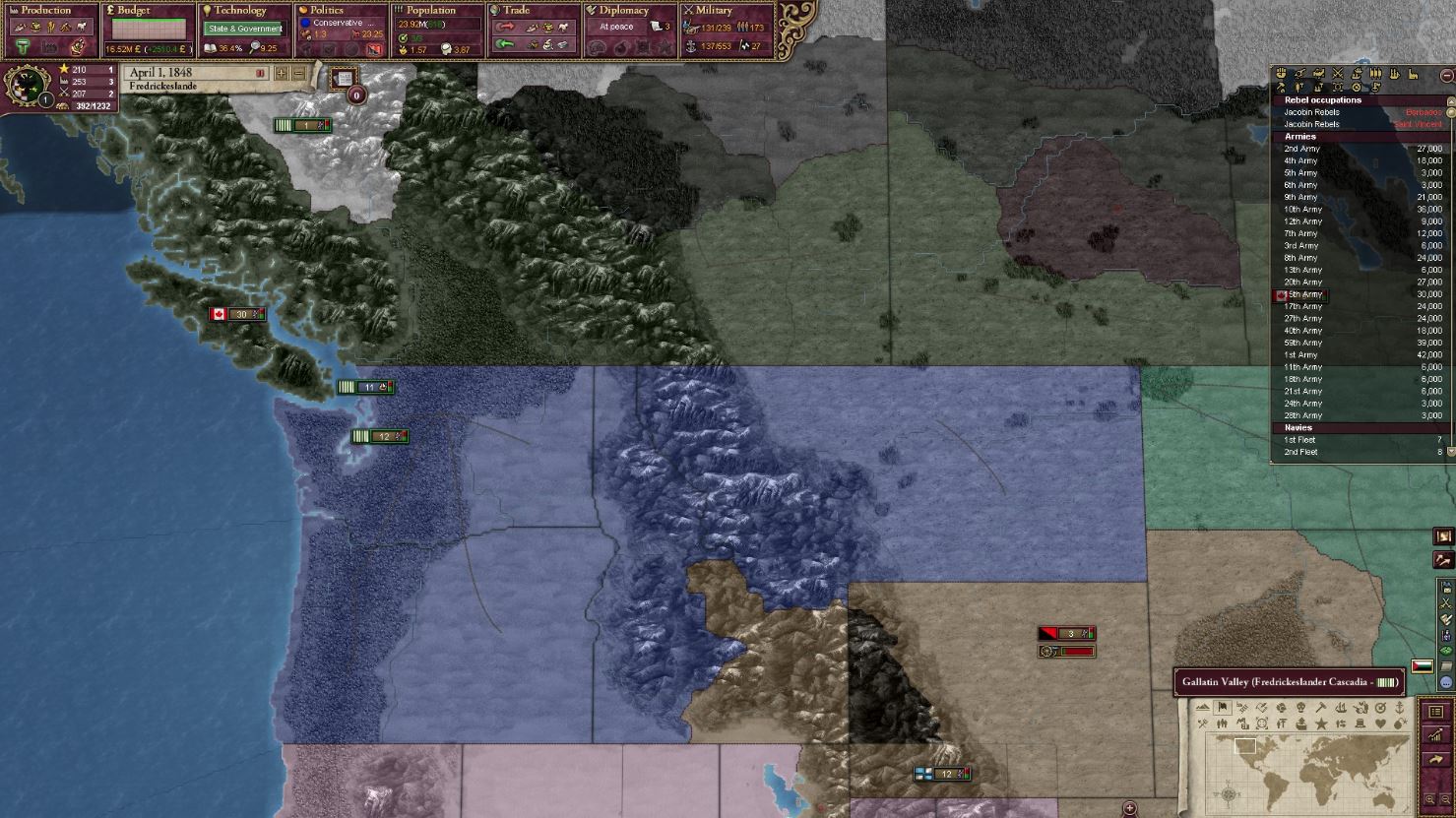 So there you go, simple as that!

In case you want to observe games without actually playing them (like a certain youtuber), maybe cause you'd like to see how rowdy the AI gets or something other, well all you have to do Is click on a country, click the play button & once you've loaded In: set the speed to 3 or 5, wait for the observer event to pop up and choose "I want to see the AI tear Itself apart" (or something to that effect), or If you're In a hurry, open the console and type "event 1999999" and do the same afterwards.

If you for some reason want to tag to another country, but then want to be observer again, just type the event again, or tag to observer (this Is the Observer's tag - AAA).

Also, If you want to see what the AI Is doing just type the command: "debug fow", It removes the fog of war, but the AI may or may not be able to see you and each other as well then, so be aware of that.

Aaannnd that's that, see you around :)

In conclusion, The End.