We just released 1.6 to Valve. This includes a hardcore option, as well as dual slot weapons and a few other features.

The Zombie Panic team has been hard at work, but would still like to bring the fans features that they have requested. And at the same time, we know that variety adds a little spice to the mix.

Therefore, we have just released ZPS v1.6, which introduces several features. Features include a new gameplay mode called "Hardcore" mode. The round is shortened to five minutes, and difficulty is increased extremely for the survivor team. This mode can be enabled via a cvar, or via a map name's prefix. Below are a few screenshots showing off one of the more startling enhancements in hardcore mode, as well as the timer. 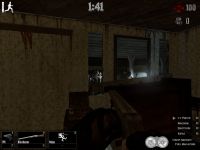 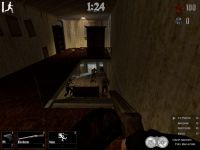 In addition to this feature, we have added double-width slots for large weapons (visible in the screenshot above), chatbox messages that indicate who issued a voice command, and a few features to eliminate current gameplay exploits. A full changelog can be found here.

Ah I love this mod, it's really great. Nice work on the updates guys. Cheers.

I dont know why the 'half magazine'ammo drop was taken away it helped me share ammo with teamates, and spawn late with ppk and keyboard was changed to zombie only was removed to only spawn as zombie if late, hehe I always spawned late to just get the ppk. The slots idea I liked. Now we just need better melee's so headshots do more damage and the new zps_clubzombo map as well as extra weapons.

Half mags were removed since people would grab a rather substantial amount of ammo, drop it all in one large pile using the half mag ammo drop, and toss some sort of explosive into the ammo pile causing the server to lag severely and eventually crash

Spawning late with ppks and keyboard had to be removed because players would also tend to quickly disconnect and reconnect when they're forced into the zombie team in the first minute or so of a round so they can play on the human team, giving zombies a disadvantage

Why not make a system where you can walk up to people and transfer ammo over using a button, rather than throwing it on the floor for people to pick up?

It makes more sense and eliminates the lag problem

Transferring to people is definitely possible, and an enhancement we've put off for a long time. But eliminating drops entirely would be detrimental to ZPS, as this creates a situation where you have a ton of weapon/ammo weight to get rid of if you want a speed boost, but nobody to give it to.

Dropping on the ground is still a necessity.

Always good to see an update, thanks guys!

Thanks guys, Ive always enjoyed this mod, and I recently forgot about it. Ill have to start it up and play it again.

do you need half life 2 to play

You need to have purchased any one of these titles which gives you access to the Source SDK and Orange Box SDK.

This Mod is really awesome, but i dont have enough time to play.

A neat way to fix ammo hogging and survivors having a huge amount of ammo, is creating a "limited container" system so you can open closets, crates, etc. for ammo. It's limited because once the container is opened, it will not spawn any more ammo.

It can have a lot of use, such as carrying a crate of ammo instead of breaking it, allowing you to do ammo runs with a speed penalty, and usually rewards you well with a lot of ammo.

A side use to ammo crates is that pressing E can give the player 1 clip of ammo and the crate usually contains 8x to 12x the clips. This would mean you'd need different crates for different ammo.