In this update we talk about the gameplay and story behind the campaign mode of Zombie Hunter Inc. Also we have just started our Kickstarter and Greenlight campaigns and would love if you could support us.

We have not posted news for a long time because we were very busy developing our game, but now we've actually have something worthy to show you.

First of all, we have just launched our Kickstarter and Steam Greenlight campaigns check them out!

The most time we spent was developing the campaign mode for our game. We are proud to say that we now have a powerful editor that will allow us to create beautiful and complex levels for our story. Moreover, we have expanded our survival mode and added multiplayer support. In this article I will tell you about the story and gameplay in the campaign mode in detail.

The level editor of Zombie Hunter Inc utilizes the full power of the game's lighting engine.

The story in Zombie Hunter, Inc. starts with Bob, the wintergreen lover from Texas. When the zombie apocalypse happened, Bob decided to create a company to save survivors from the undead... for a reasonable fee, of course :). When zombies corner the main protagonist, Bob saves him and takes into his company as a hunter-for-hire. Now, as a Zombie Hunter, Inc. employee, our hero needs to respond to radio distress calls and move out whenever a survivor (or a "client" :)) is in trouble. 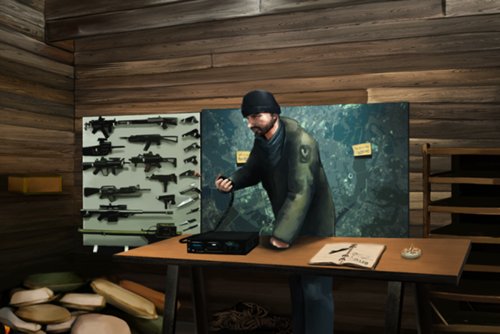 A zombie hunter's job is to respond to distress calls from surivors.

The gameplay in the campaign mode would differ greatly from the survival mode. The world would be split into large locations, which you will travel to from your office. The camera is attached to your character as you roam around vast levels, set in abandoned Washington, DC. In this mode, zombies will attack and kill the hunter, so you have to kill them in order to survive and reach the client safely. However, ammunition will be sparse in campaign mode and it will end very fast if you try to mindlessly shoot your way through the horde. Deliberate, accurate headshots combined with cleaver use of destructible environment would be the key to victory.

Another important part of the gameplay would be secrets. Each level would be filled with secrets, some of which will even have multiple accesses. As resources would be quite limited in the game, hunting for secrets would play an important part in your survival. Moreover, you will be able to return to every location you unlocked in the game any time to find secrets you could not access at your first visit. We loved level design in games like Gun Girl 2, where as you progress through the game, and unlock new powers and moves, you are able to access new places in old locations, which were inaccessible before. Even though backtracking can sometimes be tedious in games, in Gun Girl 2 it was never so, because the game rarely forced you to do it - you were shown an unreachable place as you walked through a location the first time, and then you had a choice either to come back to it, whenever you received new powers or not. At the same time, the game was pretty tough and unforgiving and you were always seeking for new tools to improve your situation. And that pushed you towards those locked locations. They always had a significant reward hidden inside, and you knew it is worth going back there to claim it. That is something we plan to add to our levels. There will be places you cannot access at your first run through a location. But, as you progress through the game, you will unlock new tools, that will let you get into those locations. Then you will have a choice: go back and check the reward or just ignore them and try to beat the game without those secrets.

One of the secrets in the demo level of Zombie Hunter Inc - a hidden room.

As we mentioned, you play a role of a zombie hunter-for-hire and your main job would be rescuing survivors. However, the survivor missions would not simply be generic shoot-em-ups. We plan to experiment with different gameplay mechanics for each of those missions. We loved the mechanics in games like The Last Stand and Elona Shooter, where you fend off zombies with guns, barricades and traps and we plan to add it into some of our missions. There will also be missions, where you will not only face slow unarmed zombies, but marauders with firearms and even elite Russian soldiers.In fact, Bob would not be the only person in Washington who happened to gather a band of zombie hunters. There will be rival organizations, who will not be very tolerable to your party. Not to mention that post-apocalyptic Washington is filled with marauders and looters, for whom, hunters are just walking bags with loot. 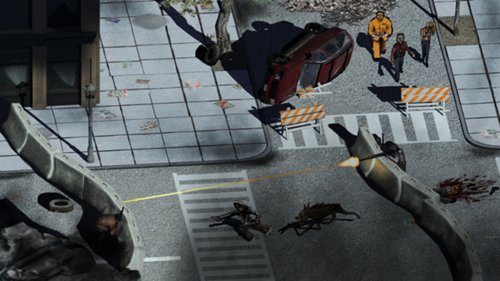 For marauders, zombie hunters are nothing but walking bags with loot.

At some point during the campaign, Bob will receive a mysterious distress call. The voice on the radio will claim that he is the president of the United States and that he is locked in the White House with a few of his bodyguards. He will offer a handsome price for his rescue. Bob, being the patriot that he is, will stand up to the call and set off immediately alongside his crew. However, he might be the only one in the entire city, who has no doubts that the voice on the radio actually belongs to the president. First men of the state are the first one to be evacuated in case of emergency and it is more than hard to believe that the president was left behind when the zombie apocalypse happened. However, there has been no news from the "official" government, therefore most of the survivors and bandits will charge into the White House to find out the truth, shooting each other along the way. Moreover, a popular rumor state that the Russians staved off some of the zombies due to their overly-militarized society. It turns out that the Russian president is sending his very best troops (the Spetznaz) to capture the American president -- murdering all who stand in their way.

Those are our plans for the campaign mode. As I mentioned earlier, so far we have managed to develop a powerful editor that will allow us to build the world of Zombie Hunter Inc. We have even made our first demo level in it, which you will be able to try out soon, as we plan to upload the game demo in a few days.However, there is some bad news too. The truth is, we are almost out of funds right now and there is a high chance we will have to stop the development. Our last chance is our Kickstarter campaign. If we fail, we might need to close the studio, if we succeed, we will have enough funds to finish the game. We are counting on your support, so if you like our idea, please back us on Kickstarter and vote for us on Steam Greenlight.