Zombie Cannon Attack is the best endless runner with zombies and cannons you'll read about all day. Provided you read this article that is, although maybe reading the title counts too.

It's finally here! After months of development, Zombie Cannon Attack! released on Android this week, with further platforms to follow. Zombie Cannon Attack! is a zombie themed endless runner. As the blurb says "Fire test zombies from your cannon to infect the local populace and create your very own rampaging zombie horde. Gather data and use it to upgrade your zombies and build the perfect undead army." You can download it for FREE from the Google Play Store here. 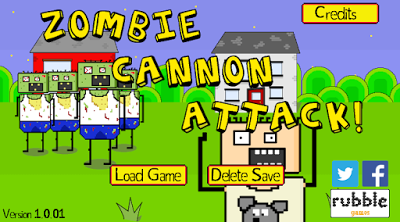 Perhaps, however, you're the sort of discerning player that doesn't just click any old download link they're told to on the internet. In that case, this is the post for you.

So, there's this Mad Scientist chap, intent on world domination/slaughtering humanity and starting anew/blowing shit up for fun* (delete as appropriate). Does he melt the polar icecaps and hide on a mountain top? Build an army of crazed killer cyborgs? Or does he create a single zombie to send out into the world and spread an undead plague? If you guessed zombies, you're correct (if not maybe you'll be interested in my upcoming games Shooty Cyborg Attack! or Drowny Water Attack!).

Obviously subjugating the whole planet with one solitary zombie is a lot to ask. Like any good scientist, he'll need to experiment, gather data and keep tweaking his plague until he can produce the perfect specimen. He'll also need an assistant out in the field to record the data and perhaps give the zombie hordes a little helping hand every now and again. In short, he needs you!

A zombie, probably in a snowstorm or something. 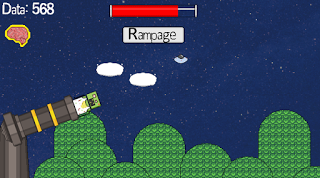 As everyone knows, you can't just release a zombie anywhere and expect results. But you also don't want to get caught driving a rotting corpse into town, especially one that won't keep still. You need a delivery method. You need a cannon (obviously). 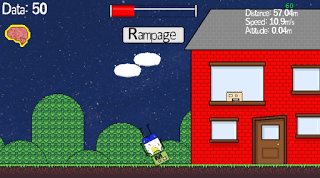 Luckily for you, zombies have very bouncy heads 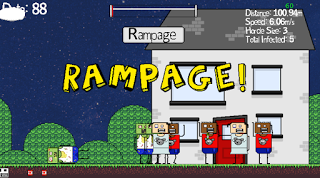 Don't just lie there, infect someone. Oh, you're liquefying. Well, er, carry on.

Sorry to be blunt, but your chosen plague vector is basically a lump of rotting meat with all it's higher brain functions removed. The end goal may be a rampaging killing machine, but the initial reality is something that won't so much catch and infect it's victims as it will shuffle along then fall over and twitch for a bit. You'll have a LOT of upgrading to do. 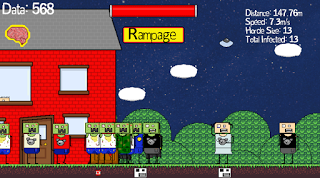 'Look, some of our fellow citizens are tricking the zombies by turning green, moaning and eating people'

I mean, cannons? Who uses cannons nowadays? No-one, that's who. It's all laser-guided cruise missiles these days, and not just because of how cool they sound. Your cannon in particular is poorly maintained and unreliable. It will also need some upgrading, and even then I wouldn't expect too much from it. Seriously though, a cannon? What were you thinking? 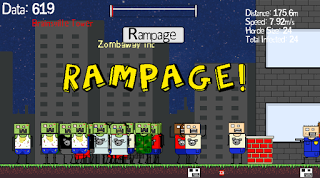 Who knew? It turns out that, rather than stand by as they and their loved ones are turned into the walking dead, many people will run away. Some will even stand and fight, using makeshift barricades and whatever weapons are to hand. That's not to mention the Police and Armed Forces. There are even rumours of crazy vigilantes who use their underwear as overwear rushing to join the fight.

This might be harder than you thought. Zombie Cannon Attack! is out now and you really should play it. 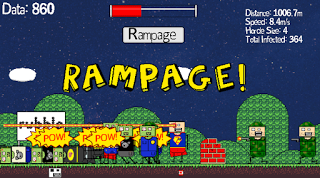 In case you're wondering, that's SuperZee - the man of Teal - dunno who you thought it was.