Discussing the main character: Cogmind, the robot that builds itself.

Here we are six months into this blog and there hasn't yet been a post dedicated to the game's namesake robot!

Unlike a majority of roguelikes you don't start the game by selecting a race, class, or anything else. You play Cogmind, more or less a "naked robot core," and are quickly defined by what components you attach while traveling around. (If you don't know about components, catch up by reading the post outlining the game's core concepts.)

The lack of a character creation process is both a boon and a drawback. Games are quick to start and restart, and the game is much more dynamic as you're forced to "think on your feet" by solving problems using only what you find. At the same time, by not making your own character you don't start with that immediate sense of attachment from having created something right off the bat. And honestly character generation can be the most fun part of some games (I am guilty of spending more time "rolling characters" than playing some games ;p). This is not one of those games. But trying to appeal to everyone in the crowd will just result in a horrible game, so no char gen.

There is even little permanence in whatever build you scrap together from component stockpiles and the remains of your enemies, and not just because you'll find better parts to upgrade. Part integrity is essentially your "HP," so 1) you'll be destroyed fairly quickly without any parts covering you and 2) in order to spare you an untimely death your parts will be blown off one after another.

So your "HP" is at the same time your ability to generate energy (power sources), move (propulsion systems), fight (weapons), etc. (utilities). You lose and gain protection and capabilities in tandem, meaning the more you expose yourself to combat the less "capable" you become until you can find new parts to attach. At this point even "useless"/sub-par parts can be more useful simply because they offer protection. I imagine not enough 7DRL players realized the implications of this mechanic. Who cares if you don't need/want that wheel sitting over there--if you've got the space pick it up and strap it on to block shots!

Thus combat is also the catalyst driving the dynamic nature of the game, sometimes forcing you to adapt to a new set of parts found at the last minute while surrounded by an enemy patrol. Parts are actually fairly easy to come by, even if you have to salvage used/damaged ones left in the twisted remains of your enemies. Survival is a question of staying effective long enough to find the exit without being overrun and losing to attrition, though that's easier said than done since a situation can quickly cascade into a complete mess if you're not careful.

You can also avoid all this by doing your best to stay away from combat (always advisable, since it's dangerous in the long-term and usually not required).

On the subject of build permanence, aside from the optional stealth approach there are numerous other mechanics in place to keep you equipped with the parts you're particularly fond of. For one, parts are generally found in stockpiles containing multiple identical copies, so you can carry spares with your limited inventory space (expandable via parts, of course). Protect entire categories of attached parts (e.g. "weapons") by shielding them (essentially parts that shield other parts). When you do lose a favorite part, if you have the schematic (obtained via hacking or analysis) you can build one yourself at a fabricator. Hacking terminals may also enable you to locate specific types of items elsewhere on the same map.

It's important to remember that basic parts are always available from enemy robots, so you'll never be without those. Need a flight unit? Shoot down some of those flyers! Want a cloaking device? Hunter-class robots carry them. Every robot is built to a certain specification, and you can salvage any of their parts (those that manage to survive destruction, that is--another case against explosives). 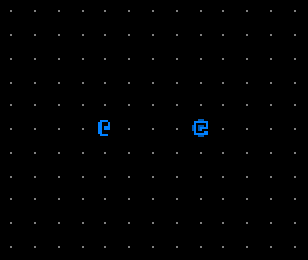 No one knows what Cogmind looks like, nor do we have to because it's ASCII (or highly symbolic in the case of sprites--7DRL example above). It would be difficult to visually represent the huge number of possible permutations (in a pleasing manner, anyway). Your imagination does the job just fine.

Although completely by coincidence, it was perhaps inevitable that three of the four part categories reflect the basic RPG stat trichotomy: propulsion is your dexterity, utilities your intelligence, and weapons your strength. (Power, the odd one out, acts more like a resource as it powers the other three.) A Cogmind build can emphasize any of these three to fit your traditional RPG archetypes:

Interestingly, I prefer to allocate most of my slots to utilities, just like I enjoy playing mages in fantasy games for their versatility. 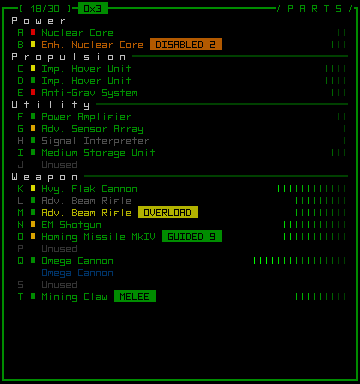 Cogmind does not earn XP. There are a lot of advantages to this model, the most apparent and welcome being the fact that grinding is pointless. Yay!

Good game design ensures that the player isn't forced to do something non-fun just to achieve their goal, yet many games do just that by making grinding a means to an end, even in the "better" cases barely keeping your attention along the way by dropping loot in the form of a zillion different items with minute differences.

A lack of grinding also keeps the focus on your goal, which is ultimately to escape to the surface (we'll talk a bit about the world in a much later post). It also makes stealth an even more viable strategy, since XP rewards otherwise tempt you to confront every enemy you see, even if it will be a boring encounter with a predictable outcome.

So how do you improve over time?

I won't go into it here (or anywhere really because it's part of the story to be uncovered), but your "core" is actually evolving as you move upward. Each time a handful of base stats will increase by (mostly small) predefined amounts, but the key change will be that reaching each new level gives you two new component slots, and at that time you choose what category they belong to. So you can decide you want extra propulsion slots to move faster or support more weight, or extra utility slots for increased versatility, or extra weapon slots because you like firing 6, 7, 8... guns at once, or extra power slots because you use energy-hungry parts.

This opens up a host of new opportunities and combinations within an already familiar system, and as your character progresses it's still parts that do the most to define "you." In traditional terms, progression is therefore centered around gaining equipment slots, sort of like taking a stereotypical RPG and saying you grow a new arm when you level to hold yet another weapon, or another leg to run faster, or another brain to... think more? By the end you become what amounts to a six-armed, five-legged, three-headed monstrosity with four hearts. Or whatever ;)

I'm so pumped for this game! Also this was a very well written article, and I so look forward to each and every one of these updates!!!

Thanks, I do spend a lot of time preparing my posts, time that would be nice to instead spend on the game itself, but then no one would hear much about it ;). Plus it's nice to write everything down once in a while to see what followers think about the progress, as well as reflect on it myself.

We appreciate the time you put into making the posts and the game!

can wait to play this

And I can't wait to let everyone play this ;)

Always still so much to do, but it's getting there...