We share some stats about Foxhole in 2016 and talk about some important milestones we've reached.

Both the Foxhole development team and community have accomplished a lot in 2016. In this post I want to talk about the milestones we've reached together this year that excite me the most.

As of the writing of this post, our Discord community has grown to 2102 members. Here are the stats on all of our community channels: 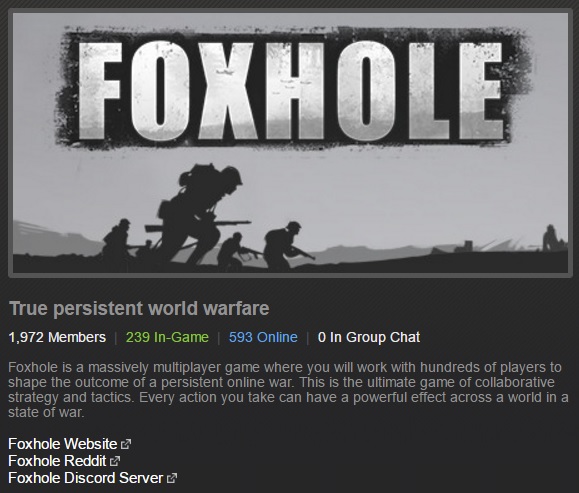 I also wanted to take this opportunity to recognize the hard work of our top community members. First, we have our Discord admin nickleeb and moderators KrazyFlyinchicken, Remlly, Shagohad, and Ztarfox who have dedicated their time to keeping our Discord server in order. Without their continued diligence, we wouldn't have been able to grow to over 2k members.

Next I want to recognize our amazing community content creators. I had thought about listing the names of our top contributors, but there are so many of you out there that I'm afraid of missing some individuals. If you are new the community, please take the time to check out the amazing fiction, art, design documents, and videos that have been created this year: Community Highlights.

One of the biggest challenges of developing Foxhole is that it requires a large number of players to test and validate game design decisions. Without having a minimum number of simultaneously players active during wars, there would literally be no game to play.

Luckily enough, we've been able to sustain more than enough players so far to effectively run a Pre-Alpha. Moreover, we've been slowly but surely growing our user base. You can see in the graph below that our average simultaneous player count has grown over the last six months (if you ignore the initial launch spike where we had lots of visibility from Steam and the spike that occurred at the start of November due to a popular streamer playing the game).

Here you can see the total install count for the Foxhole Pre-Alpha, which is well over 60k at this point. This doesn't include the thousands of players that installed the stand alone Combat Prototype that was available before Foxhole was on Steam.

Since we launched our initial Greenlight, we've been on a weekly update schedule resulting in 21 total releases (2 pre-Steam, 19 post-Steam). There are pros and cons to updating so regularly, but for 2016 this aggressive schedule has forced us to really push the momentum and keep feature development moving at a constant rate. Here is a list of the major features released this year through updates:

Design Risks that Paid Off

Before ending this post, I wanted to reflect on some of the riskier design choices we made this year that worked out in the end. I think this is super important as a reminder to continue to push forward with design risks in the new year, even if some of them may backfire on us or cause other problems.

When players first got their hands on Foxhole in playable form, it was with the Combat Prototype. This version of the game was a much more curated, closed off experience that only showcased the combat mechanics of the game. It played a lot like a top-down version of Battlefield, rather than the game we envisioned. While we always knew we had to transition from this limited game to the open world, we were incredibly nervous about this change since many players had already grown to love this fast paced Combat Prototype formula. In addition, we knew the Combat Prototype was a safe bet in terms of providing players with short term action, where the open world presented many unknowns and had to risk of feeling too slow and boring for many.

We pushed forward anyways and fired out the Open World update without much regard for the consequences. While we did have some major issues initially (anyone remember those long walks before Trucks and the Manufacturing Plant line ups?), thankfully most players were receptive to even the bare bones version of the Open World. Thus we had a starting point for building the rest of Foxhole. 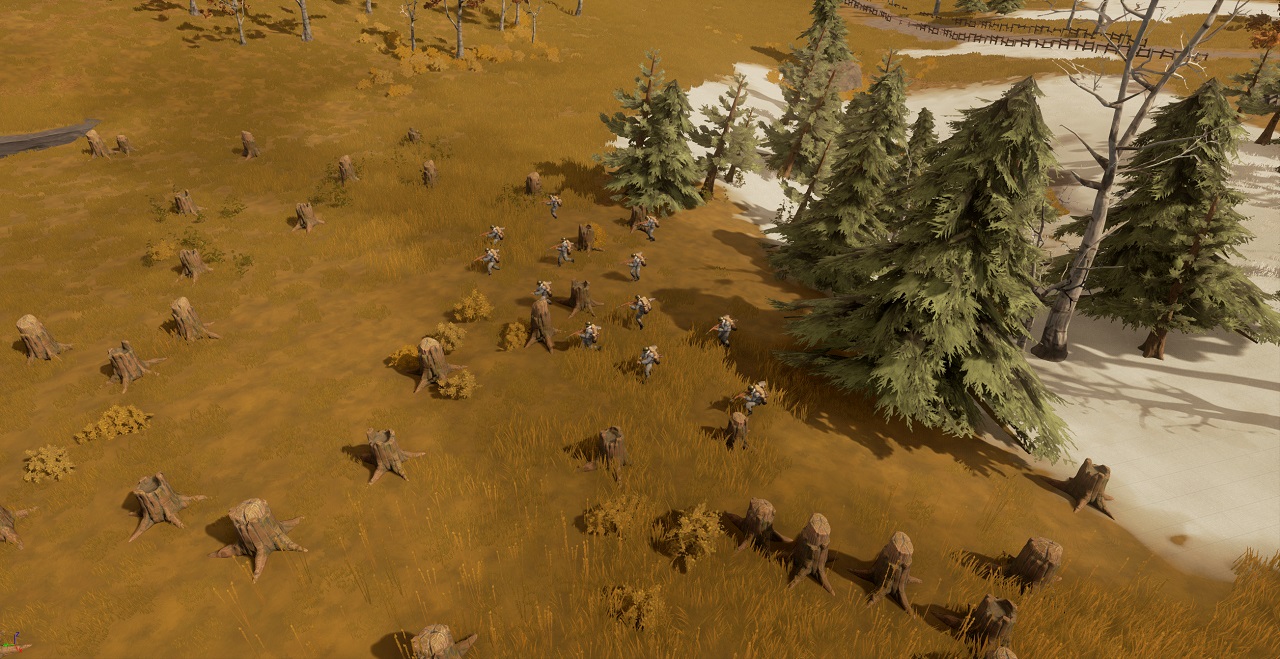 Before we introduced the mechanics for supporting Supply Lines (Transport Trucks, Soldier Supplies, Packed Weapons, etc), Foxhole was largely about combat. The first thing that most players did after logging into the game was ask "where is the fighting?". The game played a lot like more casual tactical shooters like Battlefield and there was no real way to succeed in the game other than by pushing the enemy back via firepower.

With Supply Lines, we made logistics just as important if not more important than raw combat. While we still have much work to do to improve logistics in Foxhole, we are really excited about having a basic working version of this mechanic that feels unique to other games. Foxhole is ultimately about putting all aspects of the war effort into the hands of players, so we felt this was an incredibly important step for the project. 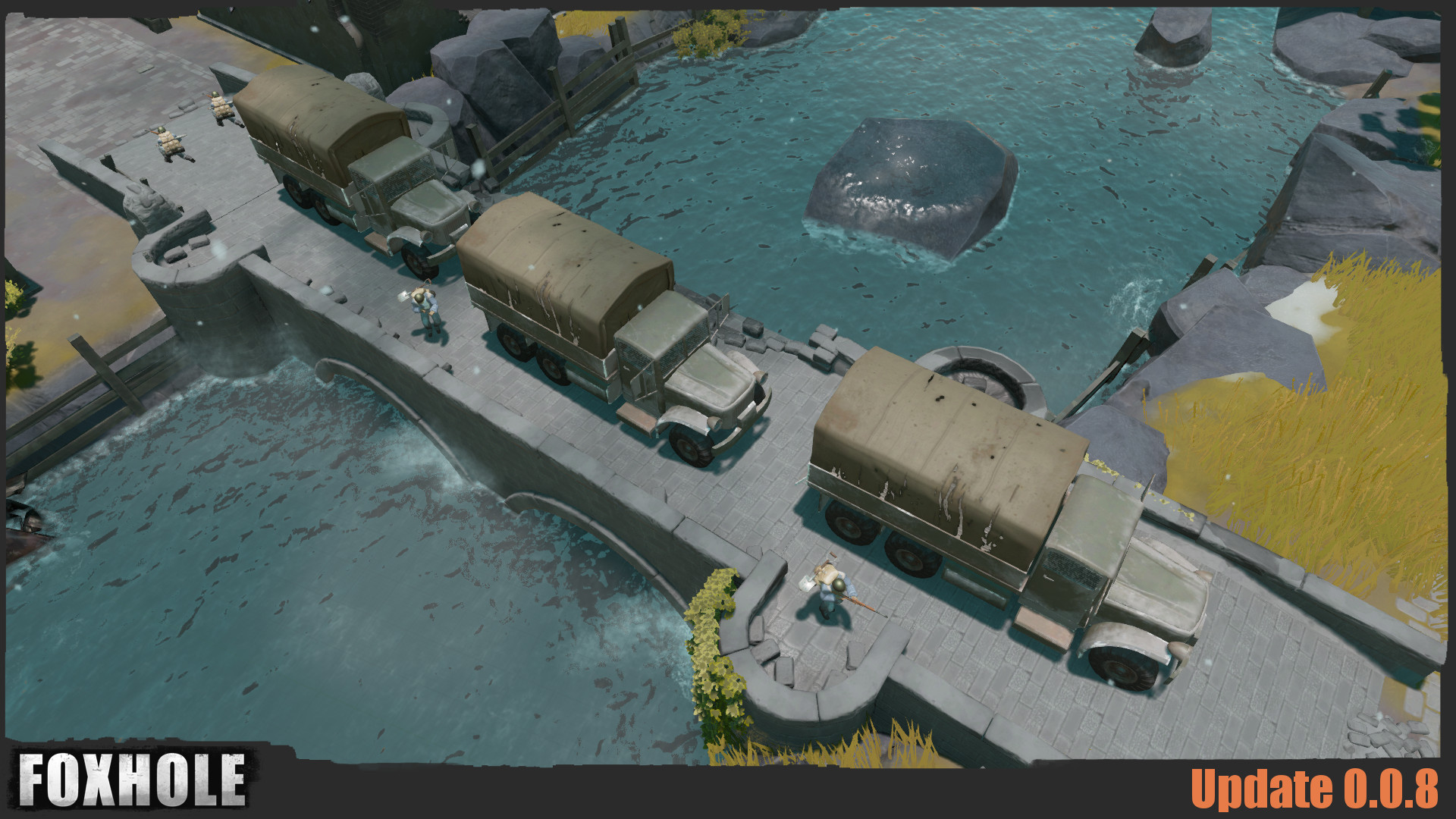 We always wanted information to be a big part of Foxhole. Early on in the Pre-Alpha, due to the size of the open world, enemies were able to easily sneak past the front line and silently destroy opposing Outposts to win the war. This raised the need for better reconnaissance tools for players and thus we added Watch Tower to the game. At first, we were concerned that the Watch Tower mechanic would be "too much work" for players to deal with since you had to spend a considerable amount of time building out networks and you also had to produce and equip a Radio to use them.

Thankfully, the Foxhole user base once again proved to us that they can not only handle complex mechanics that require time and attention, but that they actually thrive on them. Reconnaissance is one of the fundamental parts of the Foxhole puzzle and we're glad we took this risk with Watch Towers. 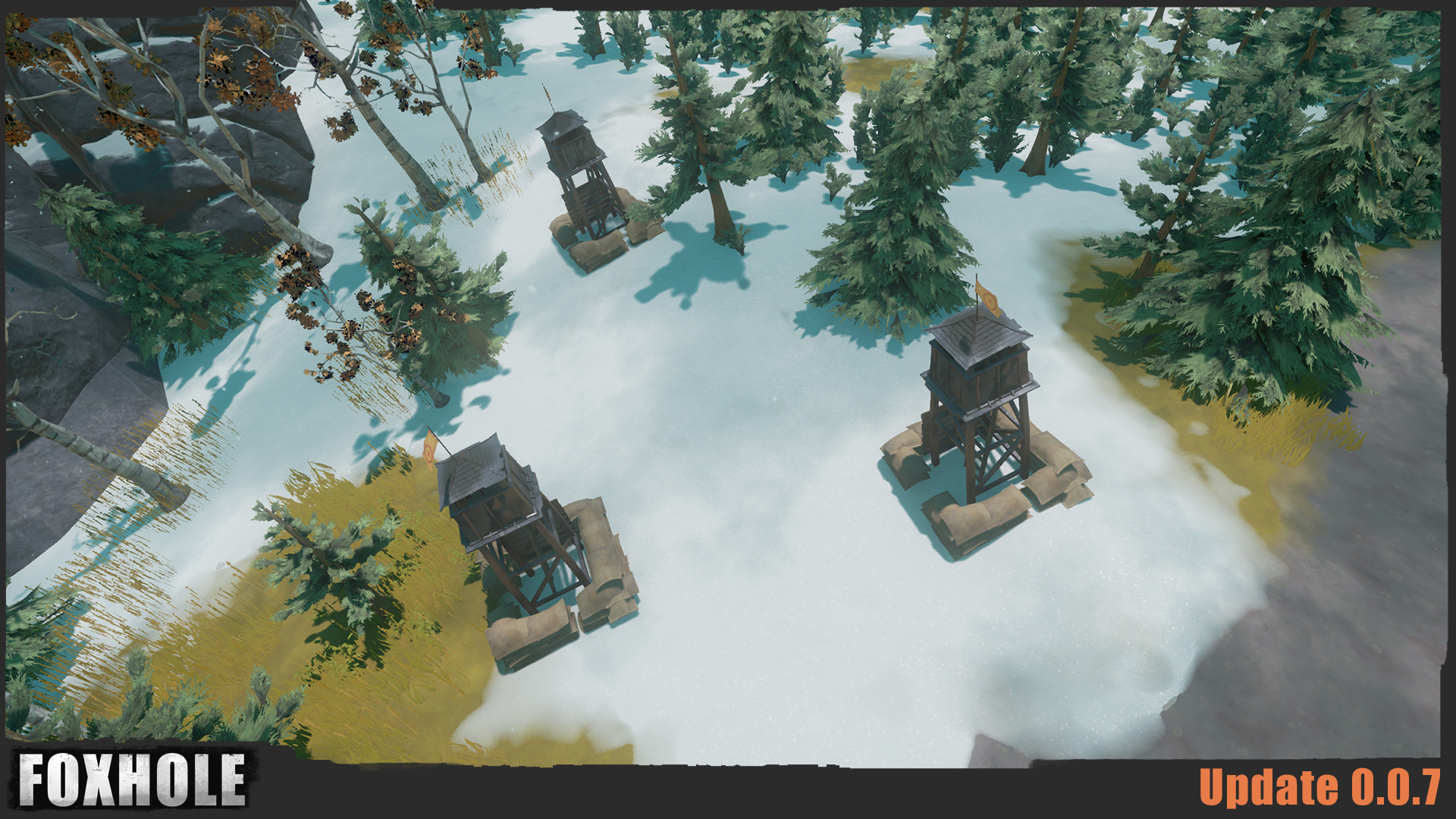 For a long time, we held off from revamping the medical mechanics in the game. We were really worried about bleeding being too difficult to deal with and we were also stressed out about what reviving might do to the game's balance. Nevertheless, we felt it was important to implement these features to help increase the value of life in the game. Our goal here was to make lives more frail (Bleeding) and provide ways for players to preserve their lives (Truama Kits) so that they are deterred from simply throwing them away recklessly. We also felt it was important to make these mechanics based around cooperation.

While we are aware of that the medical mechanics will still require many more iterations to get right, we felt these features have been a success thus far. 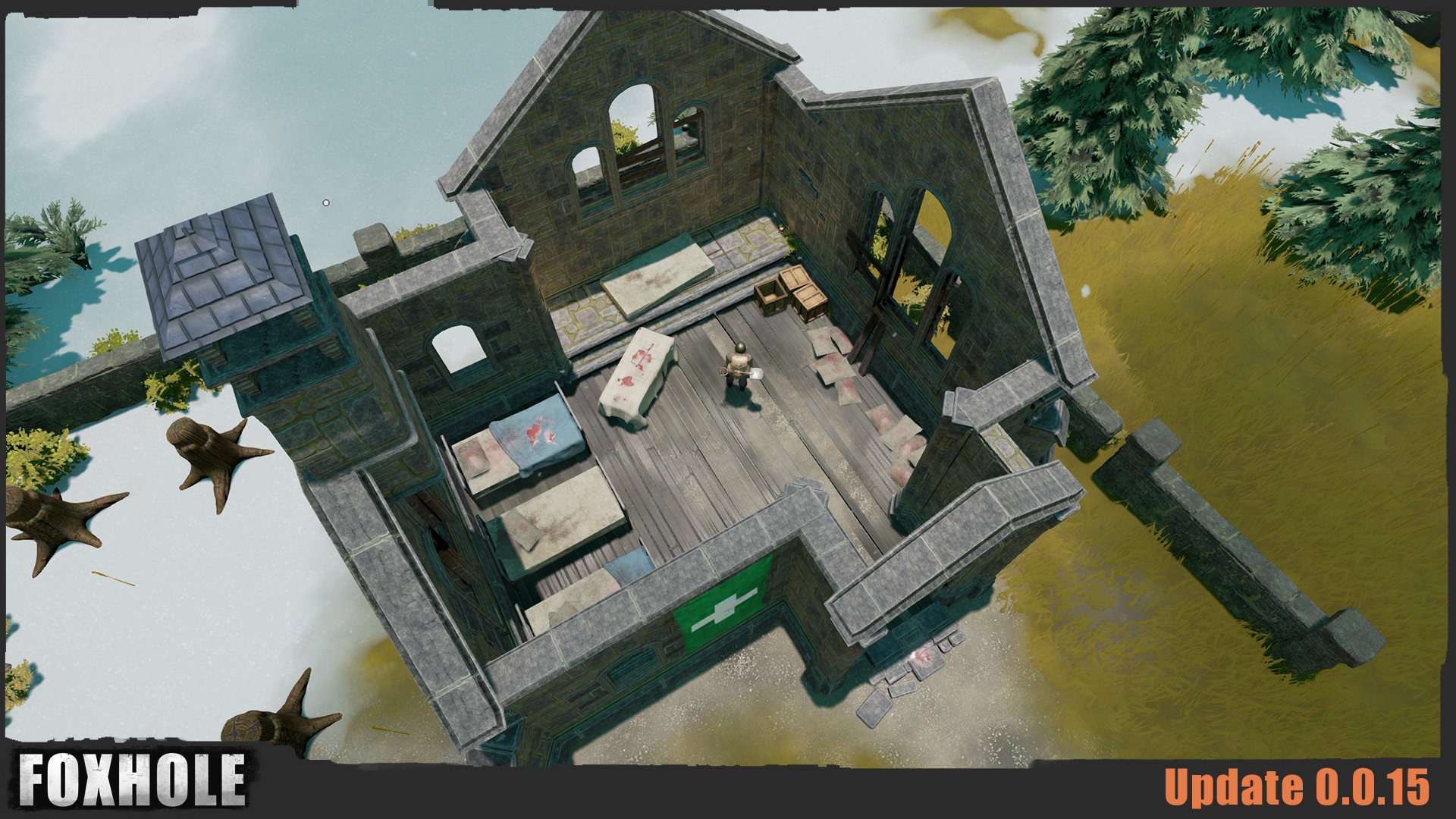 The Field Artillery was introduced to test out the idea of having a really powerful weapon that could be devastating, but that required a lot of coordination and cooperation to operate. When we launched this feature, we were both worried that it might be too overpowered and that it might be too complicated to use since it required three players to work together. One area of contention we had was with the aim mechanic. A simpler version was proposed early on that allowed the player firing the artillery to see the the target location, instead of requiring a spotter.

After releasing the Field Artillery, we observed that players adapted to the spotter mechanic with much greater ease than we anticipated. This proved to us once again that our user base is extremely adept at picking up mechanics that require a lot of coordination among players. This was really motivating to see since Foxhole is all about players working together to pull off amazing feats to win a war. 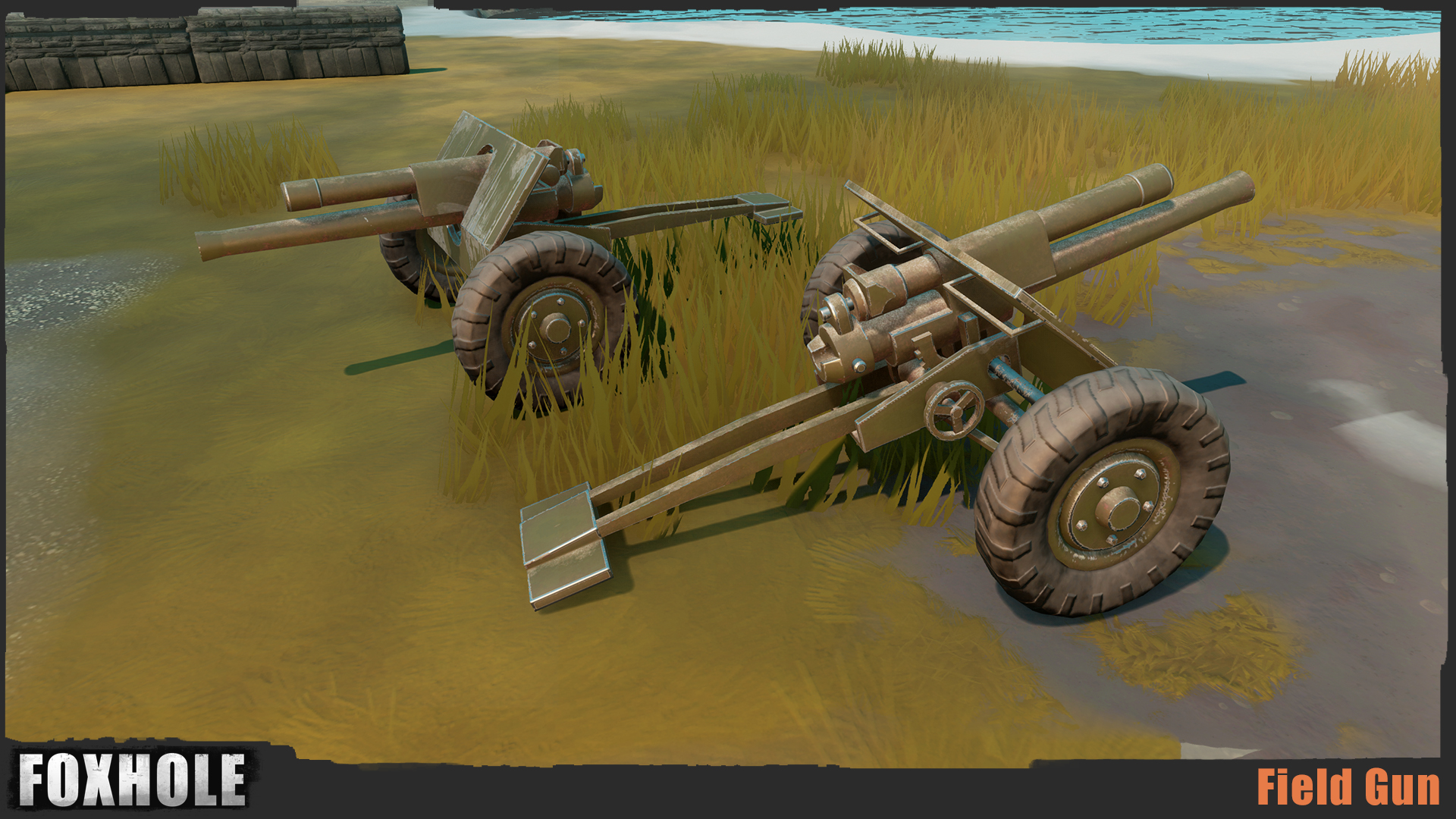