Having clocked a cumulative 6,383 hours of work over more than three years now, Cogmind is ever so close to completion. A look at 2016, and the future.

Unbelievable... I've been working on Cogmind for three and a half years now. Yet another year has gone by, and this time the end is very much in sight! 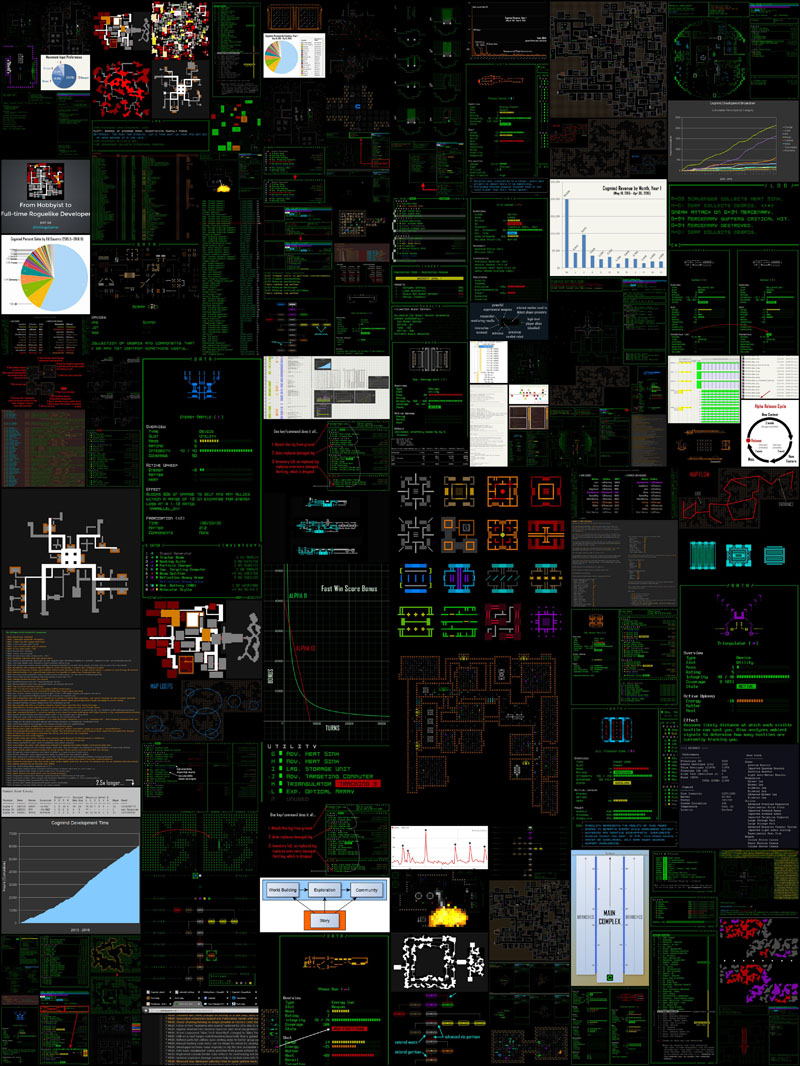 GIFs outnumbered PNGs about three-to-one, but an animated collage wouldn't be able to include enough images to do the year justice :). I don't have anywhere specific I collect only GIFs, though I did use a number of them on the page I put together this year dedicated to summarizing some of the innovations Cogmind is bringing to the genre.

As usual I've been keeping close tabs on where every hour is spent, altogether 6,383 hours so far: 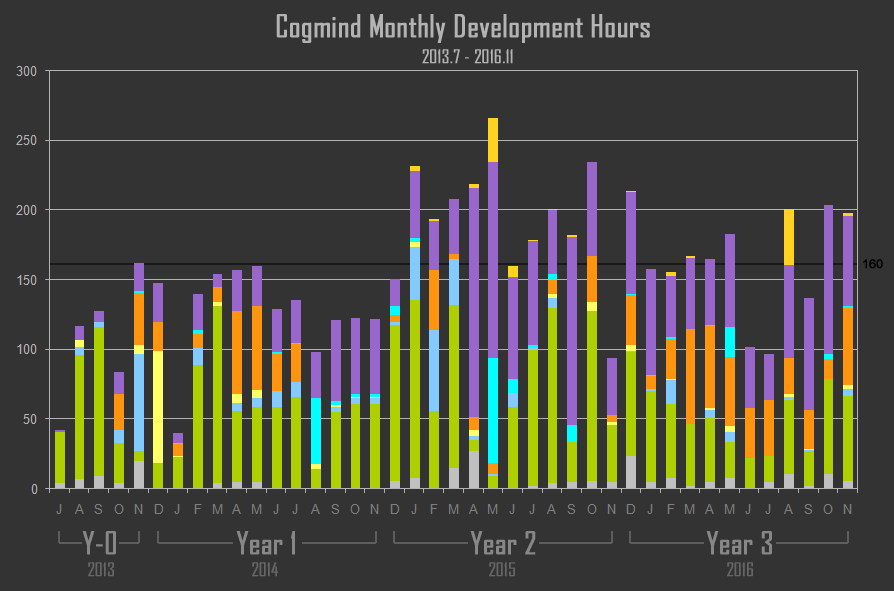 (The color coding is for different aspects of development tackled each month,

the subject of a future in-depth article to come when Cogmind is complete.)

That's 1,982 hours this year compared to 2,321 last year, when I was doing a lot of promotional prep for the launch (trailer, website, etc.), and didn't take any vacations like I did this year. (The year before, 2014, totaled 1,528 hours.) Comparing purely work on the game itself, this year added 1,151 hours compared to 1,273 in 2015 (and 1,078 the year before that), so in that respect progress has remained relatively steady. There's lots more interesting data in there, but I'll get into that another time.

At the end of 2015, my only worry was that I'd be forced to do a full launch earlier by cutting or postponing newly-planned features, but through a careful balance of progress and minimal marketing, revenue has remained steady, and Cogmind keeps growing extra features :D 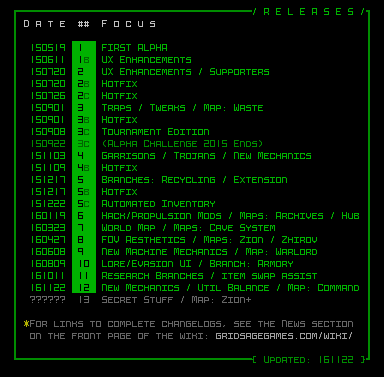 Cogmind release summary, as seen on the FAQ. For links to changelogs, full release notes,

and preview images, see the Release History I maintain on the forums.

As you can see, progress consisted of maps upon maps upon maps... Cogmind began 2016 with 14 map types, and is ending it with 26, each of which also added unique mechanics, components, and in some cases major plot events. The world got so big that it was finally time to add a world map.

And with that Cogmind's story is almost complete, which is my primary criterion for judging Cogmind to be 1.0. So we're close!

As far as sharing progress, note that the nature of this dev blog has changed--while I used to share smaller specific development updates here, this year you'll notice I've instead shifted to publishing mostly longer articles of (hopefully) greater value about some relevant gamedev topic, with occasional aggregate Cogmind updates where they align with that goal.

Regarding individual features and content, I technically share even more updates than I used to, but that progress is posted to the announcements board, subreddit, and Twitter (also some other forum threads).

I like this division of focus, and will continue the pattern into 2017, with planned articles on topics like pricing, game difficulty, code testing, roguelikedev tips, and more.

Well, the biggest would have to be that Cogmind passed both the 2,000- and 3,000-player thresholds this year! (The latter just this month.) This was the first full calendar year that Cogmind was available for purchase. Yep, in addition to the 2015 initial launch, the public alpha (Early Access, if you must!) has continued for 19 months now. Sales have been acceptable, enough to avoid forcing me to cut features! Actually, enough to convince me that I have leeway to add more, and as a result 2016 brought tons of new mechanics and QoL features that wouldn't have otherwise been possible. So thanks from myself and on behalf of future players :D. On that note, back in May I did a recap of the first 12 months of Alpha Access, wherein I shared revenue breakdowns, among other reflections.

Cogmind's community has grown in absolute terms, though as we're still in alpha most new supporters play for a bit then stop to wait for 1.0. I decided against holding another tournament like the Alpha Challenge 2015, at least this year, because while it was great fun, it also took too much time away from development last year :/. The leaderboards, however, have been very active, and there has been lots of helpful related discussion (both development-wise and player-to-player) on the forums. 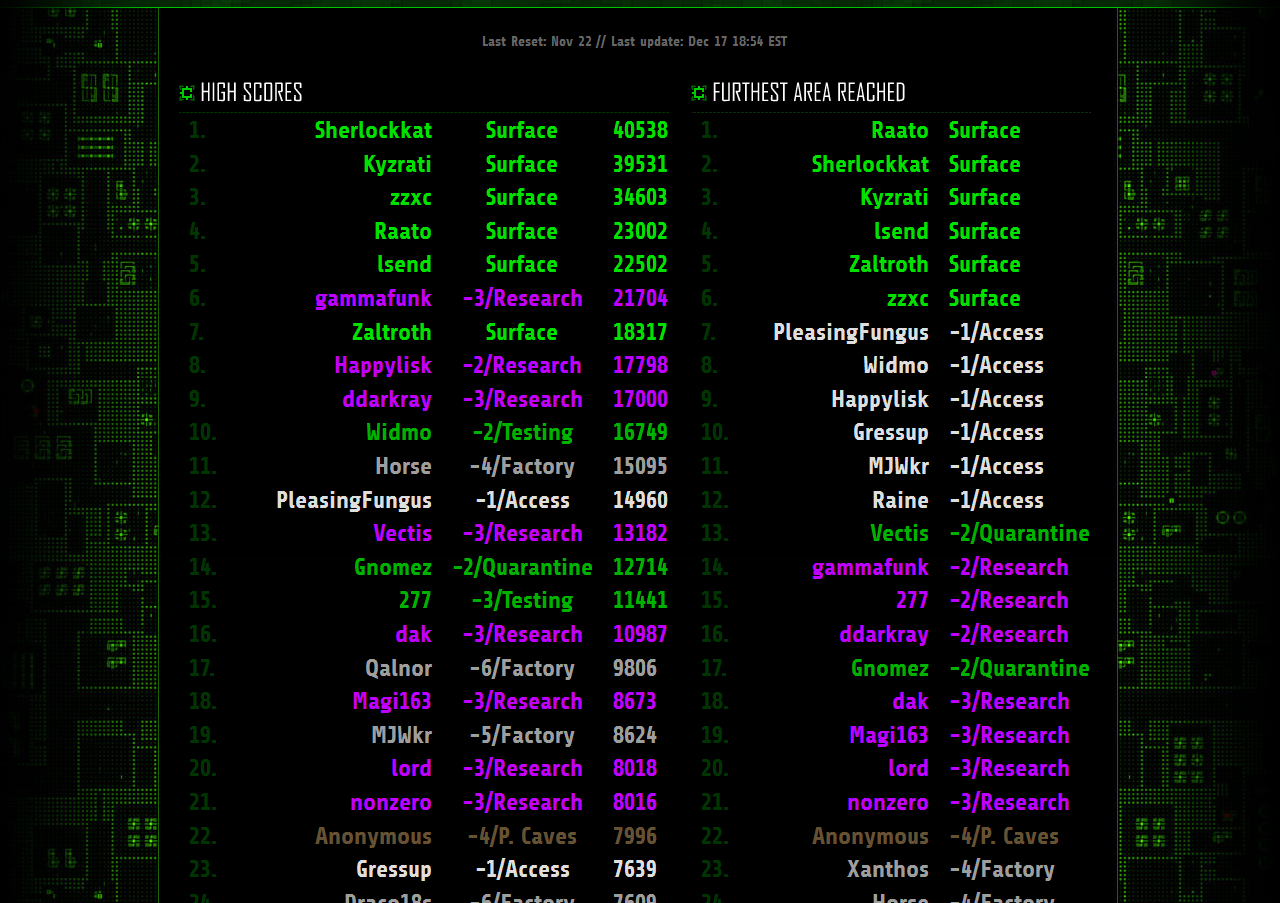 A recent snapshot of the top of the Cogmind leaderboards. The leaderboard system

and providing access to the score sheets for each run.

Forum discussion has slowed somewhat in the second half of the year, though, as many long-time players have switched to hanging out on the chat server (Discord) for the past 4-5 months.

On the project side, out of curiosity I compared Cogmind's lines of code to a year ago--this year it passed the 100k LoC mark: 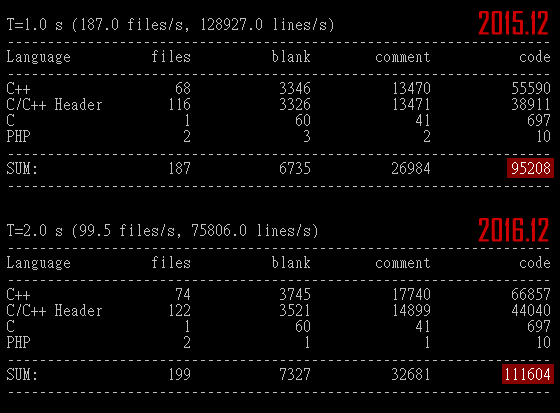 In the past year there's been a net +16,396 lines of code, or a 17.2% increase. Not a lot! That's because as described earlier much of the progress this year was in content--new maps and their corresponding robots, components, events, etc. All of that stuff is implemented via external scripts, map prefabs, and other data files rather than code. Essentially this shows the core game was already solid in 2015, all it needed was more content to realize The Vision.

Each year Cogmind attracts more attention, and this year in addition to the smaller sites that published related news/articles, Cogmind appeared among the Top games on Rock, Paper, Shotgun, on Destructoid's Top 33 list, and Nerd Much's Top 50 list.

More recently RPS did a sudden quick article on Cogmind following one of this year's larger releases. That title was quite a shock, and something I totally wasn't ready for. Very busy those few days xD. In any case, it did spur another big chunk of sales which will help propel development to 1.0! Very grateful for that coverage.

Then just this month Cogmind was once again voted into the Top 100 indies of the year on IndieDB.

It's good there's just enough attention going around to keep bringing in new players, because I'm still not doing any active marketing outreach. I get legit review key requests, but they go on a list for later and I'd rather focus on development and the existing community for now. That said, I have been doing a lot in the wider roguelike community, including making my way over to the US to take part in the awesome Roguelike Celebration! I felt like a nervous wreck, but gave a talk people seemed to enjoy anyway :P.

I don't really look forward to it, but by necessity 2017 is going to be a very different kind of year because I'll have to mostly shift away from creating content and on to business and marketing -_-. That's where hobby development really shows its superiority over doing this to make a meager living!

This is it. 2017 will be a crucial year for Cogmind, because it's the year we reach 1.0, and the year we'll finally see what cogmind can do once it reaches a wider audience--will it flop, or will it be able to pay for more roguelike goodness in the future? :)

I never imagined back in 2013 when starting out (and most certainly not when putting out the initial free version in 2012!) that I'd still be working on Cogmind now, but I'm glad I am because it's the result of good things! There haven't been any serious development hiccups, and progress has continued at the expected pace, I just repeatedly pushed back the long-term schedule to fit in more stuff. It's true that many of these things could have simply waited until after a "1.0" launch, which is what I'm sure most sane (or financially desperate) developers would do, but even Alpha 1 was a pretty solid game, and there's been ongoing player support ever since it was released, so I never really saw a need to rush it.

That said, development is naturally coming to a 1.0 milestone. I mean, look where I've set the current progress meter:

Almost everything's at 95%, which is basically me-speak for "you could call it done but I could always do more, and I am."

There's still the ambient audio to work on, a portion intentionally left for last so it could more efficiently be handled all at once, and there are already so many sound effects that they essentially create an "ambiance without any ambient sound," so it wasn't required for alpha to have additional background effects anyway (though there are a few placeholders out there). I'll be getting on that soon.

For fun I put together a time-lapse gif showing how the public progress meter (always shared via the FAQ) has evolved to reach this point:

(early on in pre-alpha there were still enough incomplete subsystems to warrant displaying them individually,

but eventually for much of alpha it boiled down to just maps and story).

Looking to the future, well, I've also continued to share the major bits over in the FAQ:

A bunch of the pending stuff will be scratched off with the next release--just two more releases and the last remaining bits of Cogmind's world will be complete, to be followed by whatever features I feel shouldn't really wait until post-1.0 development. I.e., they need to be in there before Cogmind gets more attention from the less die-hard fans. I haven't finalized exactly what those pieces are yet, as there are quite a lot of optional features and content still left on the chopping block. I'll take stock of those later, and after implementing them it's time to do a 1.0 release. And then, you know, keep releasing more after that :P