Find out all the new details about the first episode of X32I, and also hints at future episodes. Here we have some sketches of different Frigate and Cruiser designs, as well as a look at one of the largest cruisers in the UEA fleet, the Yamato. Plus another in-game model shot taken from within the UE3 it self.

Yes the project name has changed, this is due to the fact the game is going to be released in episodic format. As of today, there is currently 4 episodes in production:

What does this mean for the project and when can we expect it to arrive?

Good question, the project it self hasn't changed we just took the entire game and made it into smaller segments rather than trying to create the entire game all at once, which for a indie team would be huge amount of work. As for the release date, that's something we cannot comment on with concrete information.

We are not going to make you wait years for each episode, like a certain developer out there does. The first Episode will take the longest to create, because we have to make the entire foundation, create all the assets, and the game code to power it all. Once the foundation is down, it's all just a matter of extending the content which will mean the following releases after Episode 1, will be a lot quicker. Once we have more concrete information, we'll update you with it.

Each episode will generally end after something major happened within the story line for the X32I Saga, with some of the things we have planned it's going to make the wait between each episode a pain, but it will be worth it.

Ah how some people do amuse me :P. The team found it funny when some of the people took yesterdays update seriously.

I'm glad some of you people found the update to be funny, and yes the main antagonist the plant pot will make a appearence in X32I, and we hope you will find the easter egg funny, as well as many of the other easter eggs we have planned.

Okay time for the real content, first up we have a in-game shot of one of the hanger bay props which carry various parts around the hanger bay, mostly in the form of weapon ammunition. 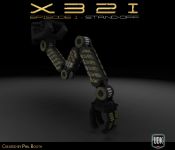 Next up we have 3 sketches of various ship designs, from the UEA Yamato, to smaller frigates. 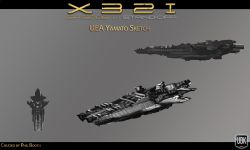 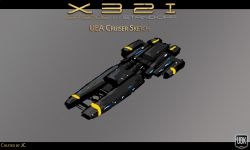 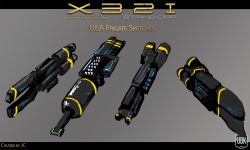 We hope you found this update to be informative, and we hope you continue to support the project. We aim to make a really memorable experience and, we cannot do it without the support of the community.