WotN releases its first faction preview for the Baltic Campaign.

Among dense forests, high mountains and numerous fjords,
Norðvegr is a dawning kingdom shaped not only in, but by its hostile
land. Merciless winters and warring neighbors leave no room for the
weak and unarmed, and thus the people in these parts have learnt
fortitude and self-reliance the hard way. Still, the fierce surroundings force the
Norsemen to seek community for survival, the fundament of any would-be
kingdom. The Norse spirit of hospitality and aggression is evident in
their customs: If a landowner fails to accommodate a wanderer with ale during
his visit, he may be righteously slain by the guest.

The long coasts makes seamanship ideal, and traders have traveled along
the Whale Road to far-away regions. Recently, population growth has
provided the realm with more men than farming alone can support, and so
the need for expansion is present. Dominate the seas, and your prey
will be unable to strike back. The naval capability and unmatched Norse
shipwright skills of Norðvegr renders dominion on waves possible.

King Hálfdan hinn mildi (King Halvdan Eysteinsson the Generous), is a
renowned warrior and viking king. He has managed to gather a petty
kingdom concentrated in Vingulmark, but there is a strong potential for
expansion. His son, Guðrǫðr veiðikonung (Gudrød the Hunter, not to be
confused with the Danish king) is 8 years old at this point, but is
already destined to perform great deeds as king.

As an embryonic kingdom, Norðvegr must plunder to fuel its expansion.
Journey a-viking across the great seas, and bring home riches to pay
your warriors. Ireland is divided by warring tribes and clans, and will
not be able to resist raids at first, and the land is littered with
wealthy churches and fat monks. The Anglo-Saxon and Gaelic kingdoms
could prove easy targets as well. Wherever the dragonships go, the
Hebrides should prove useful for further raids in the western lands;
its Pictish natives are weak and backwards. Absorb the surrounding
Norse petty kingdoms by whatever means necessary, and be
sure to strengthen your borders; the Danes are the greatest threat at
hand, and are already aware of Norðvegr as a potential rival. Your
eastern neighbors, the Geats, are primitive forest folk, but could
quickly pose a threat if united with their Swedish rivals. The Swedish
kings are of the same house as the kings of Norðvegr, so hostilities
are unlikely for now.

Long have the local kings ruled the land divided without hope of
uniting it, but that time has now come. Sail, trade, pillage, conquer,
and settle new lands! A passive king will surely be vanquished in these
lands... 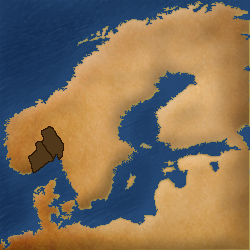