In this screenshot-heavy post, we discuss in some further detail the design philosophy between the worldbuilding in Winterfall and how it interacts with the greater design philosophy: systems vs content, and how big, interactive play environments set the context for that systems-centric design.

This #screenshotsaturday is a great opportunity to talk about a couple of design-related things regarding Winterfall. So let's get it going! 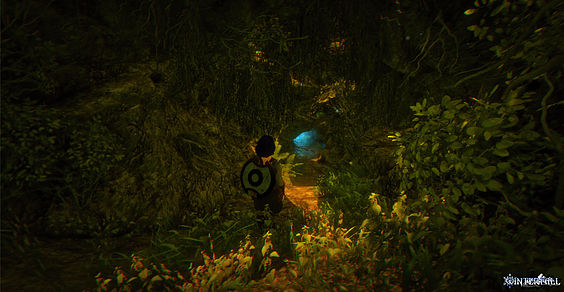 In Winterfall, the idea is that you're dealing with a very dense, very large open world made of a whole bunch of different types of environments. But what does that mean exactly? How does it work? How can we deliver? How many quintillions of scenes? Let's talk about that a bit.

The first thing is that as the world is made of different regions, not all those regions are in fact part of the same "level" or "scene". Instead, we are creating individual scenes for each of those regions. Like the forest biomes featured in this post, for example: woodlands and corsican subalpine pine forest, which may just as easily spawn a whole bunch of variants within the same biome.

In scene-based games however, sooner than not, individual scenes and loading screens may detract to the sense of being part of a single, unified world by providing boundaries and interruptions. That is why we are making it so that each one of these scenes is quite large, so much so that it may take many, many hours of play to know it enough so to navigate it well. 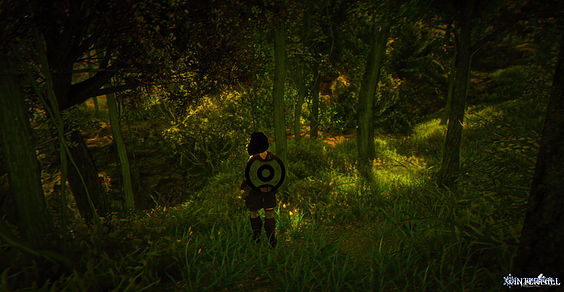 We can do that thanks to the tools at our disposal. Single-handedly, World Creator solves the problem of building and populating large, rich, open environments in a way that's incomparable. What used to take literally hundreds of hours of long, sometimes tedious manual back and forth between software and then scene-building, placing everything by hand, can now we done in an hour or so, with lots of control. Getting the broader worldbuilding out of the way then enables us to focus on fine-tuning and customizing each region, so that we can end up with many large environments to play in, but we can also keep adding them to expand the world at a good pace. Here's a sample of a quick terrain production (biome research, so a small terrain really), from topology all the way to decor population: 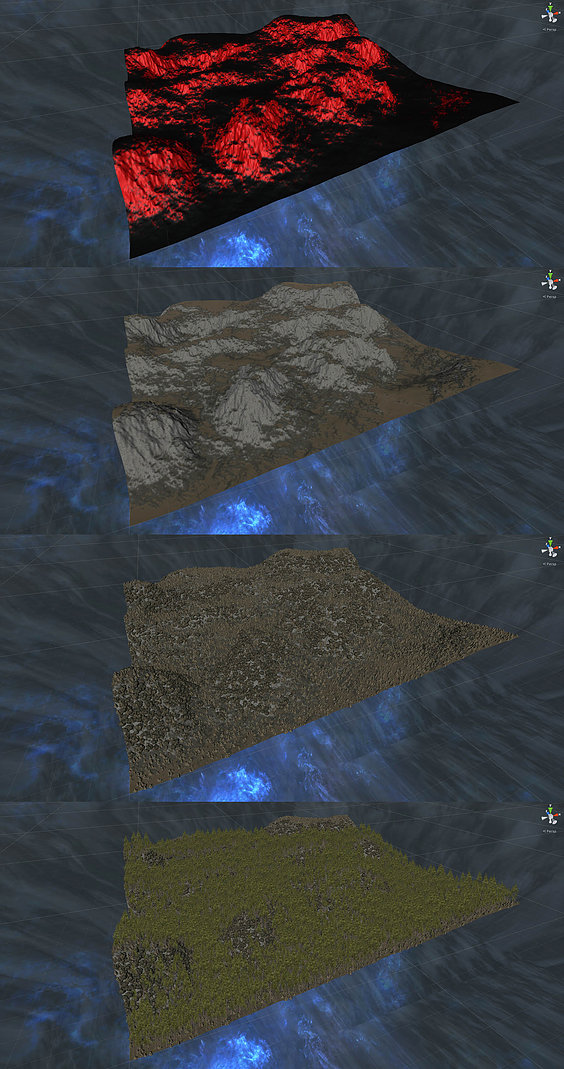 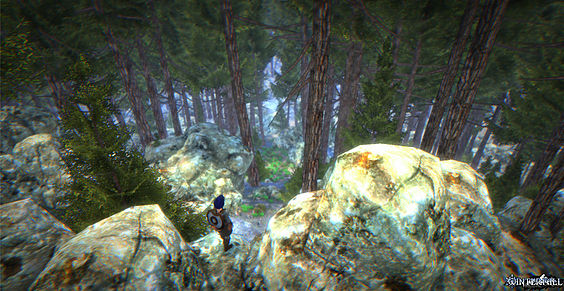 Another design choice we are making is to make the environments very dense, as the screenshots generally tend to attest. Sure, you can have the vast open plains, but for everything forest, mountain and so on, besides topology you get a lot of terrain features to deal with and navigate: rocks, bushes, brambles, trees, boulder fields and so on. That's decor-dense.

Now, this is a break from usual RPG design philosophy where the maps are generally assembled and streamlined either to take you from landmark to landmark, or to guide you from zone to zone, in a way to set a pace of content distribution: quests to complete, dungeons to clear out, etc. We are far more interested in a design approach that's about giving the players lots of interconnected systems to play with, producing different outcomes and opportunities each time, rather than in producing a nice theme park ride of carefully crafted content that you'll know by heart after the second or third time. A good example of that is how when you get lost in goal-oriented rpgs, you tend to eventually get bored, annoyed or frustrated. In Winterfall, getting lost is kind of the point because it just means more exposure to game mechanics, and therefore more opportunities to have fun. That's gameplay-dense. 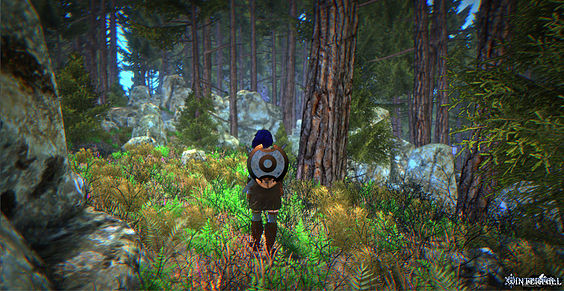 "So how do you plan to keep those large environments fun and interesting?"

That's easy: ever since World of Warcraft became the gold standard for mmorpgs (and to an extent RPGs at large), a concept-word has imposed itself in gaming discussions: "content". Content is what players need to be served so they can consume it and remain engaged with the game when the gameplay itself is not exciting enough. New content is what makes players come back when they've left. Content is what everybody discusses and demands more of. But the approach here is against content. Against content, and instead, for systems. Because systems across the board produce content, but content does not produce systems. So we'd rather focus on developing good systems that play ball with each other and keep the play value high, allowing every player their own experience. Again, looking at strategy games, for instance: in a regular strategy game, you have the same "content" from day 1 all the way through some hypothetical expansion. But since you have many systems interacting with one another, things to react to, an AI that makes its own choices and so on, you don't really care so much about "content" beyond a basic threshold, and you can just keep on playing the game and having a lot of fun.

In a regular Winterfall wilderness environments, you will be journeying from point A to point B, fending off or avoiding danger, collecting resources, investigating places for exploration, adventure and loot, you will be tending to your character's needs and aspirations, you will be adapting your plans to environmental conditions such as weather or wildlife, and so on. All those mechanics are tied together. What you do within one impacts the other. So, yes, we will obviously update the game with "content" as regularly as we can afford to... but playing the game, at the core, should keep us all busy and engaged enough.

In regular RPGs, the wilderness is one of 3 things:

- a place that has monsters you should (mostly) kill

- a place that has nothing

- a place that has pretty sights

We want to insist in the fact that since most of Winterfall will actually be sheer wilderness, it has to tick more boxes than that miserable little list of rpg tropes. The wilderness in Winterfall is a place of exploration, contemplation and interaction. A living environment that is not here to serve you premade gameplay segments but instead offer you opportunities to pursue whatever is most meaningful to you at the time, within the frame of the overarching gameplay.

We have just started working on the mechanics for the player character's vital needs. A first, somewhat simple iteration of that was addressed last year in the old videos you can still find on youtube. The whole idea is that depending on how the character exhausts himself/herself, he will develop different conditions (hunger, thirst, injury and exertion) that require different kinds of care and attention. Beyond that, there is also the way those conditions will impact the character in a deeper way, psychologically, and how we as players will respond to that. Not all characters will feel the same against the same core needs, and that'll be part of our set of toys to play with. More about this later.

So today, thanks to the joys of motion capture (early, in-progress, actual clips forthcoming) , we indulge in a bit of salmon fishing in the stream.

It's little things like that. Adding lots of way to interact with the environment in a gameplay-relevant way that is also nice to look at and experience, hybridizing genres. Here, RPG meets life sim, where you canstart gameplay that is to have repercussions on character values (stats, inventory) but is at the same time fun or relaxing or interesting to watch unfold. Take the time to "be there" in that scene, in that moment, rather than just targeting resource nodes and pressing E or F or right click or whatever to merely +1 some item in your inventory. So in our above screenshot, our girl has taken most of her clothes off to not wet them in the cold river water, and goes salmon fishing by hands. Some characters may be good at it, some characters may be terrible at it, some may enjoy it and it may relax or entertain them, some may hate it and it may frustrate or anger them.

And then we're back at camp, considering your next goals and managing the fallout of those emotions and experiences on our character. 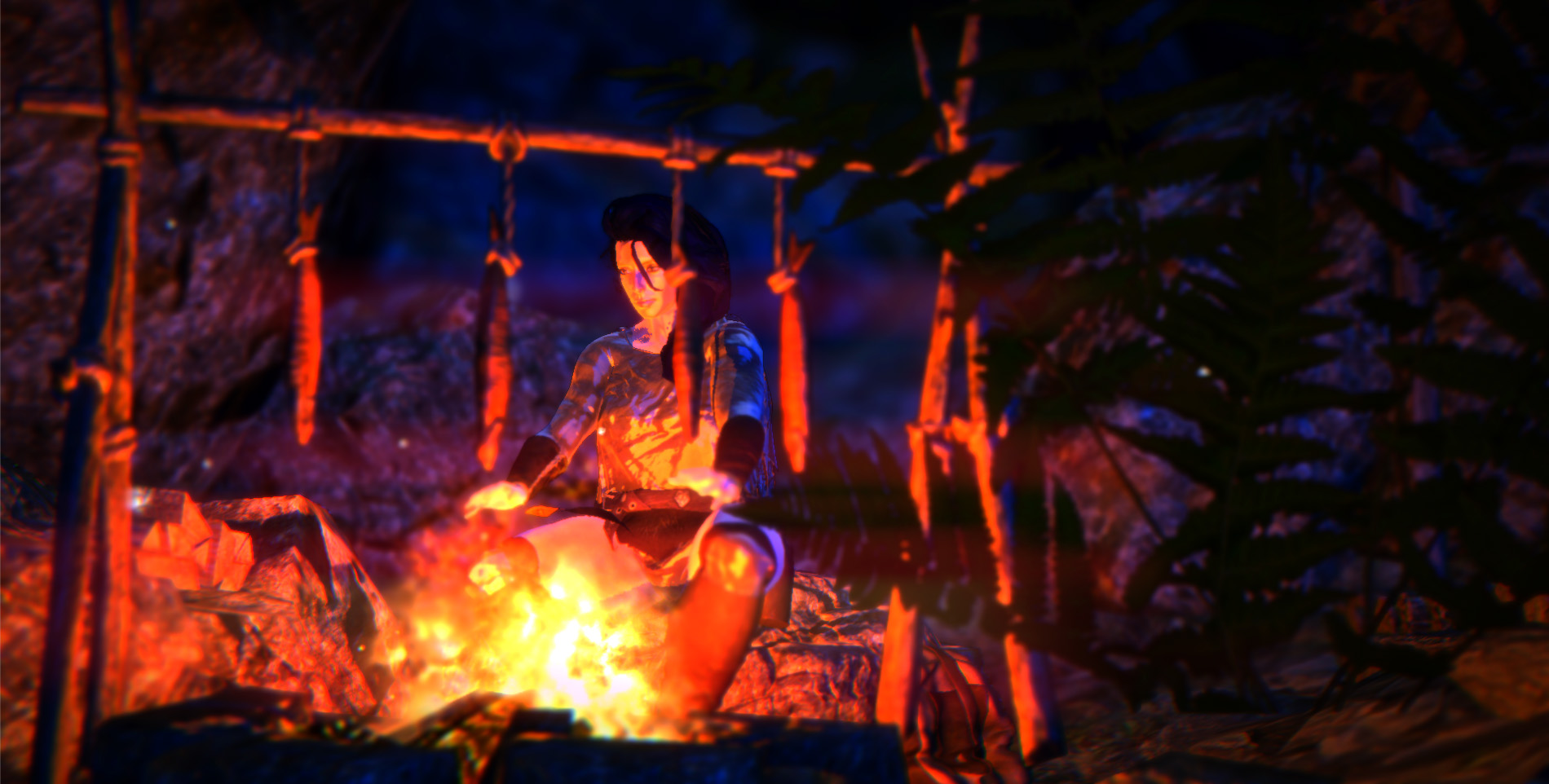 Or at our journey's end, we could be in a big warm room full of noise and people, passing on those accumulated emotions by interaction with others (who may have their own emotions to pass on and get rid of). The idea here is that human interaction is a constant "trade" of emotion, where our character's positive or negative emotions, as we use them as fuel for interaction, may be "disposed of" or amplified, or "detonated", and so on. Again this is an example of our philosophy with Winterfall: why stick to conventions, why not give a second chance to the most overlooked gameplay contexts and situations? Human interaction comes to mind: most of the time in games you either obtain info, trade goods, or watch some cinematic dialogue. Why not make it truly matter to who the character is and, therefore, to who the player wants to be in the world? More about that exciting aspect of the game's design in some future feature. 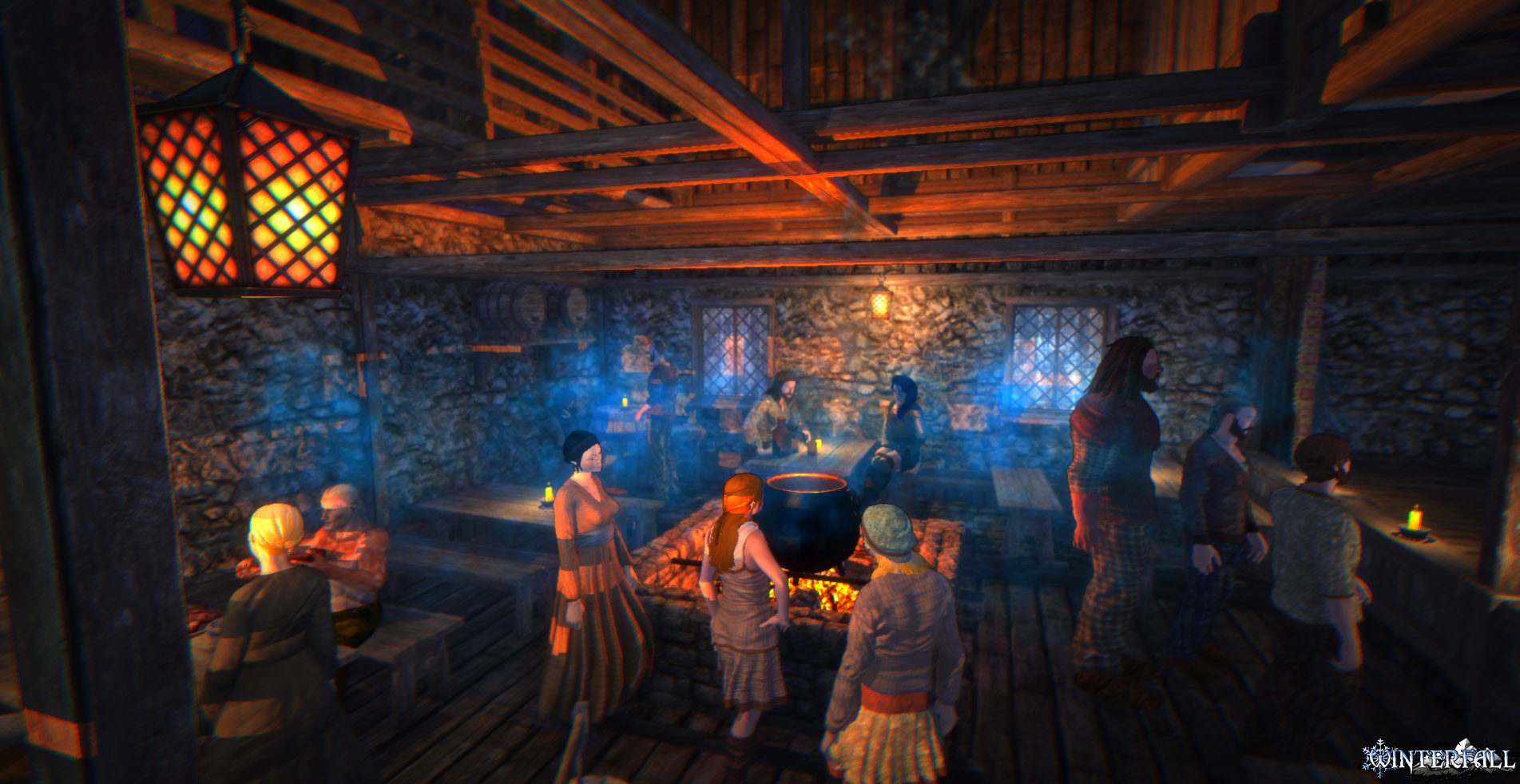 And here is a random gratuitous. in-progress ruin with waterfall. 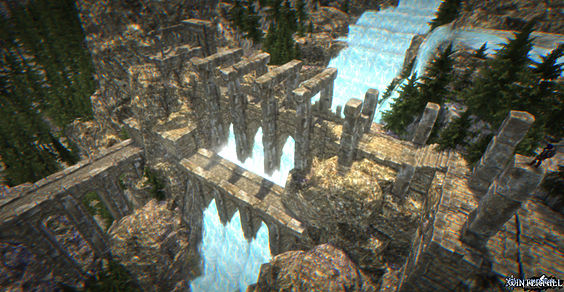 This was our third #screenshotsaturday for Winterfall, this time with added musings. See you next week for more!

when can i buy? take my money!

Haha, thanks for the enthusiasm. I'd rather not say whens because as I said some other time, you either control the schedule and not the quality or the quality and not the schedule. But I'd generally expect a first something very late this year or at the beginning of the next.