Warcraft: Guardians of Azeroth. World Update №2 - May the Light save us.

Almost a year ago we released a developer's diary code-named World Update talking about a new bookmark. The bookmark had been abandoned for a couple of months, but thanks to our patrons, we have been actively working on it for the last 3 months and from that, we have something to show and tell.

In the past World Update, we described the political situation in Lordaeron, now it is time to talk about the possible outcomes and how it relates to the holy orders. Grand Marshal Othmar Garithos and Dark Lady Sylvanas Windrunner are the two biggest players in the region. Whoever takes Capital City will determine the future of Lordaeron and its people and defenders, such as the Order of the Silver Hand. After Arthas' betrayal and Uther's death, the holy warriors fell into despair. What was once a united order is now on the verge of splitting apart. News from the capital will only exacerbate the situation. Depending on who takes the city, the order can split up into 3 different orders. 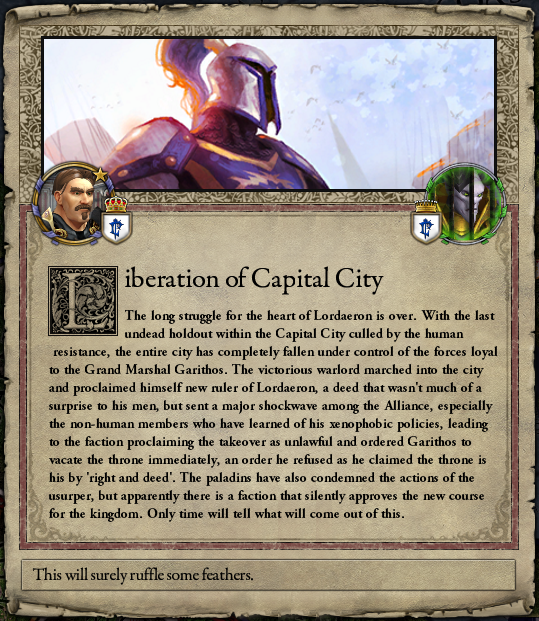 If Grand Marshal Garithos declares himself the new ruler of Lordaeron, some fanatical paladins will swear allegiance to the new king, forming a new order, which will be known as the Scarlet Crusade. Garithos himself will be known as the Scarlet King of Lordaeron. The Order of the Silver Hand will remain to defend the eastern border with unsuccessful attempts to recapture Stratholme while the Scarlet King accumulates power in the west. 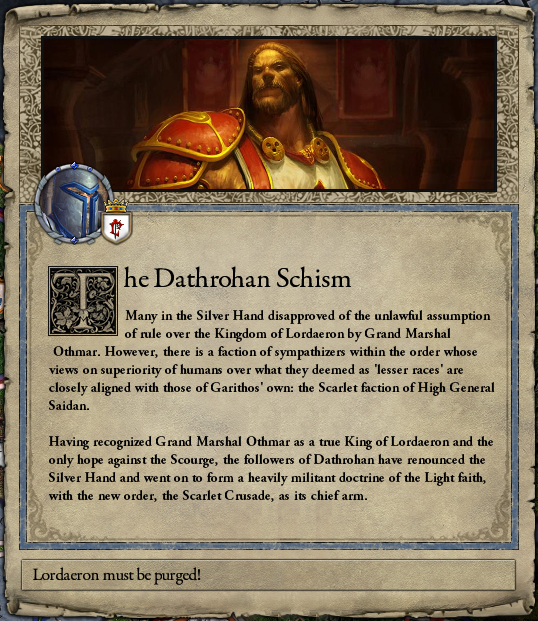 However, the Grand Marshal may otherwise send scouts to search for the last survivor of the Menethil dynasty: Calia. The noble paladins who swore an oath to her father will kneel before the true queen without hesitation. However, there will also be those who would rather stay away from the royal family, which once almost destroyed their order. These renegades will call themselves the Argent Dawn. 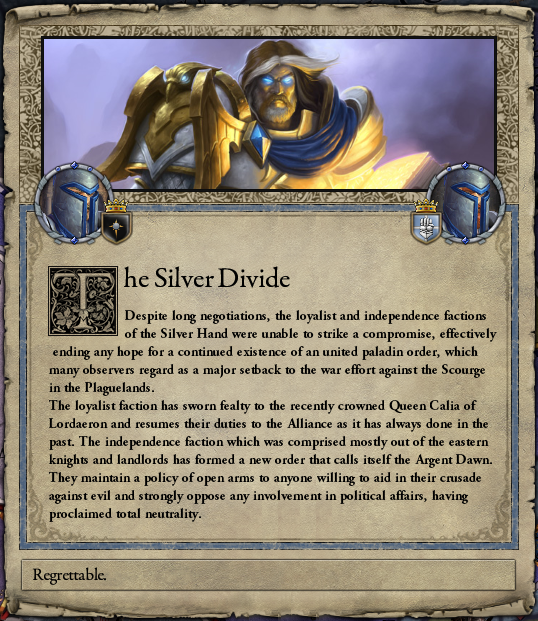 If Dark Lady Sylvanas takes the capital, it will destroy the paladins' morale. The current leader of the Order, Alexandros Mograine, nicknamed the Ashbringer, will die during mysterious circumstances. The people of Lordaeron will split into two camps: the fanatical Scarlet Crusade and the dogmatic Argent Dawn. Those who are still loyal to the true undivided Order will be forced to hide in distant overseas kingdoms. 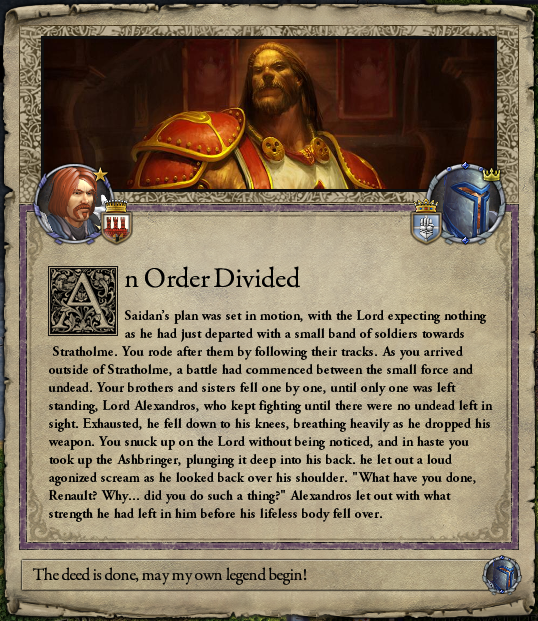 We've mentioned Stratholme and the eastern border a few times, but what is so scary about it? Well, eastern Lordaeron is fully controlled by the Scourge. The kingdoms of the dead stretch from Andorhal to Tranquillien, led by powerful necromancers. Kel'thuzad, the Lich Lord and the eternal leader of the Cult of the Damned, controls Stratholme and nearby lands together with Kirkessen the Zealous, Pharamond Rivendare, Alexei Barov and Araj the Summoner. 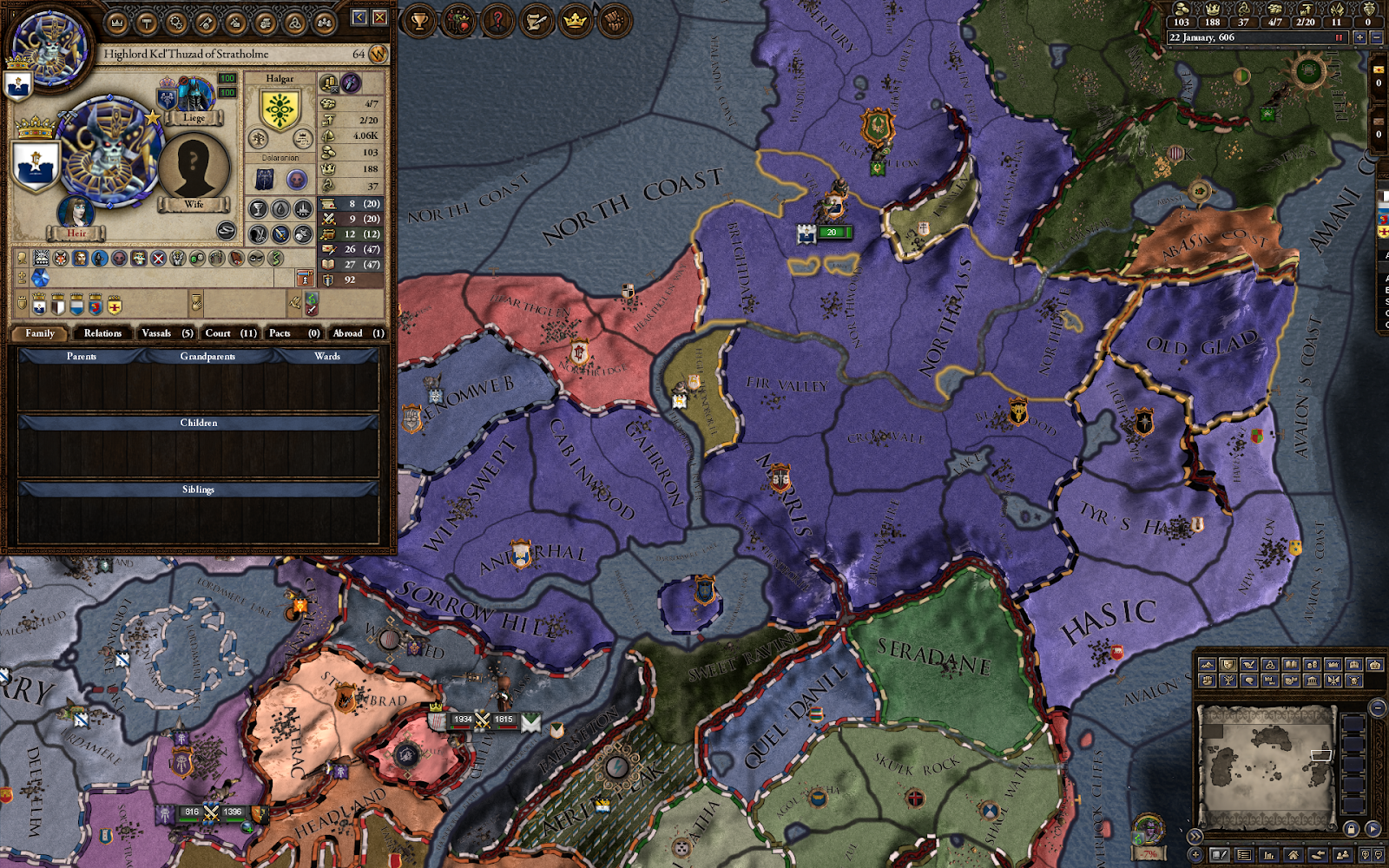 North of Stratholme, Dar'Khan Drathir rules. After his betrayal, he received an award that he cannot dream of: an eternal life, ruling the ruins of his native kingdom. Although the capital of the elves, Silvermoon, is still controlled by elves, it's only a matter of time before Drathir's forces enter the city. 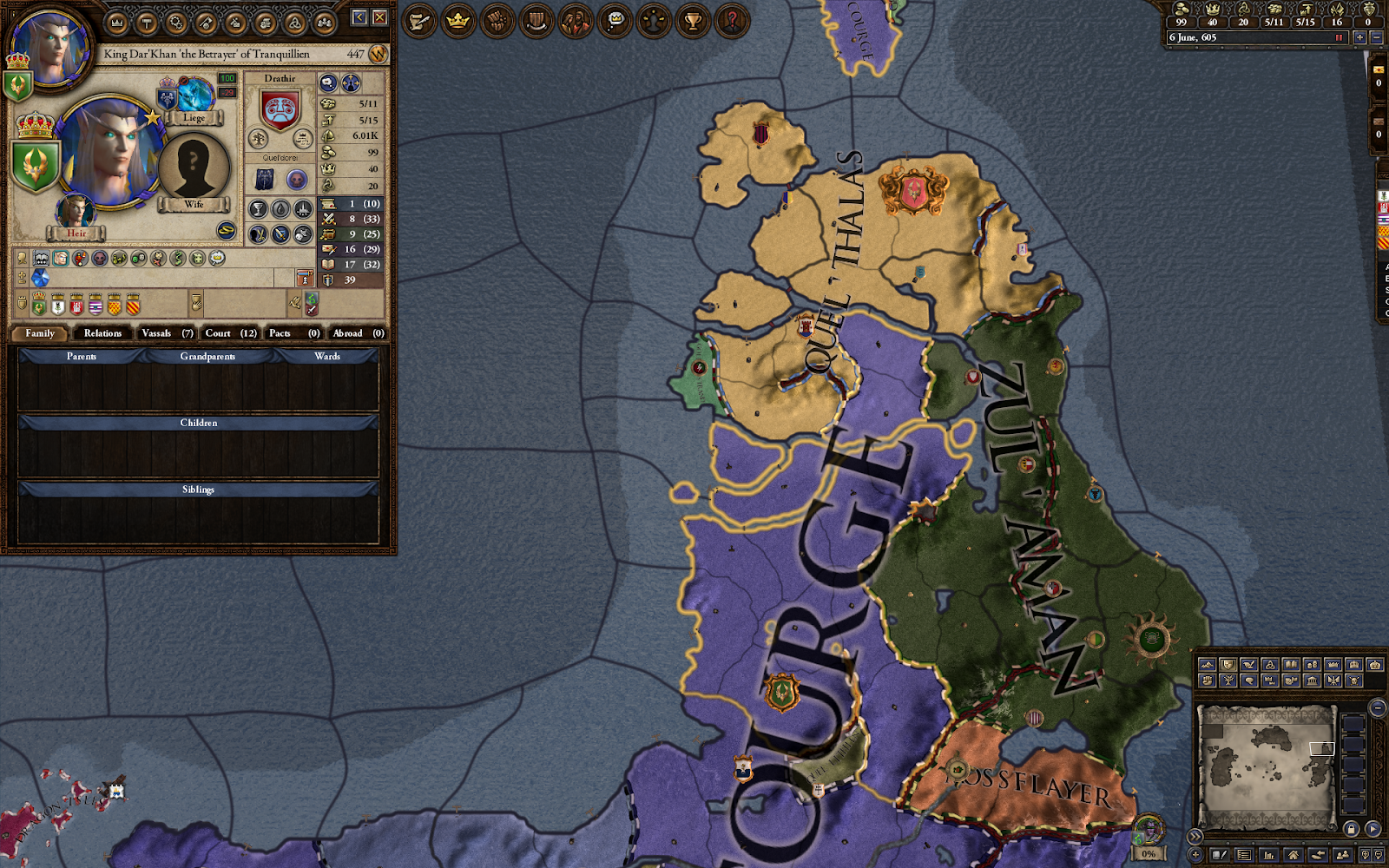 Thank you for your attention and we thank you so much for your support. This bookmark is almost complete. However, we have yet to test it, to get feedback, so it will sadly take some more time. If you like what we’re doing, consider supporting us on Patreon!

This is going tho be great!!

What if Natrezim keep the capital city?

NO WAY! Only over Sylvanas' dead body.
P.S. Default way. The Silver Hand may split up after some time.

Could Sylvanas raise dead? or any special thing for banshees?
Can Arthas Mind control her?

Yes. Sylvanas is a hunter-necromancer.
At the start of the bookmark, she's free.