As mentioned in the last article, there are now new sprites and a new map for players to enjoy!

The next update to the 1.2 WIP is here and sooner than I expected. Not much more to say than that this time around. See below for details!

AT long last, NATION01 (Zombie Complex) has been finished. All in all, it should take about 15 minutes to play through everything that can be accessed at this point in the game. Have some screenshots! 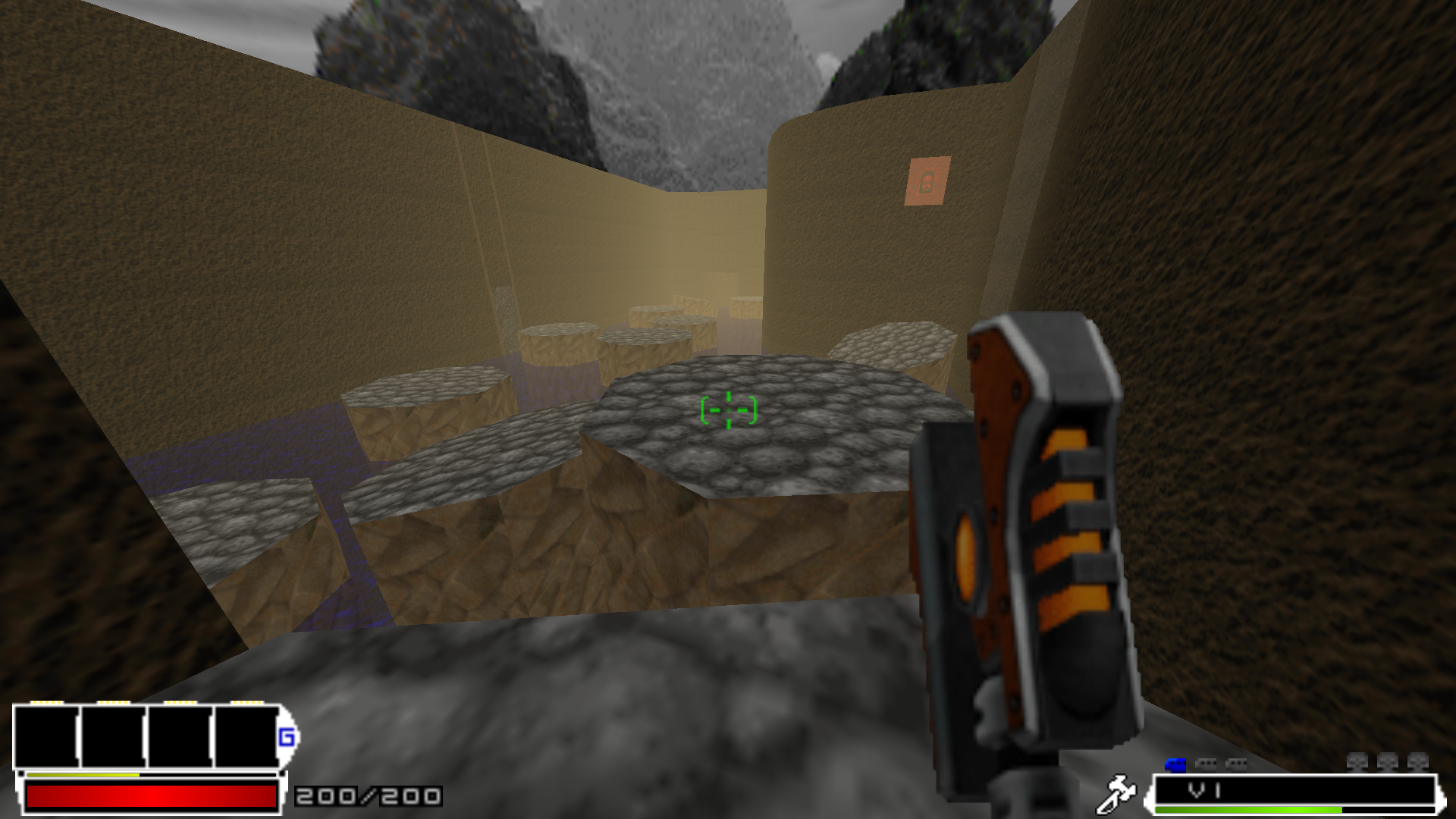 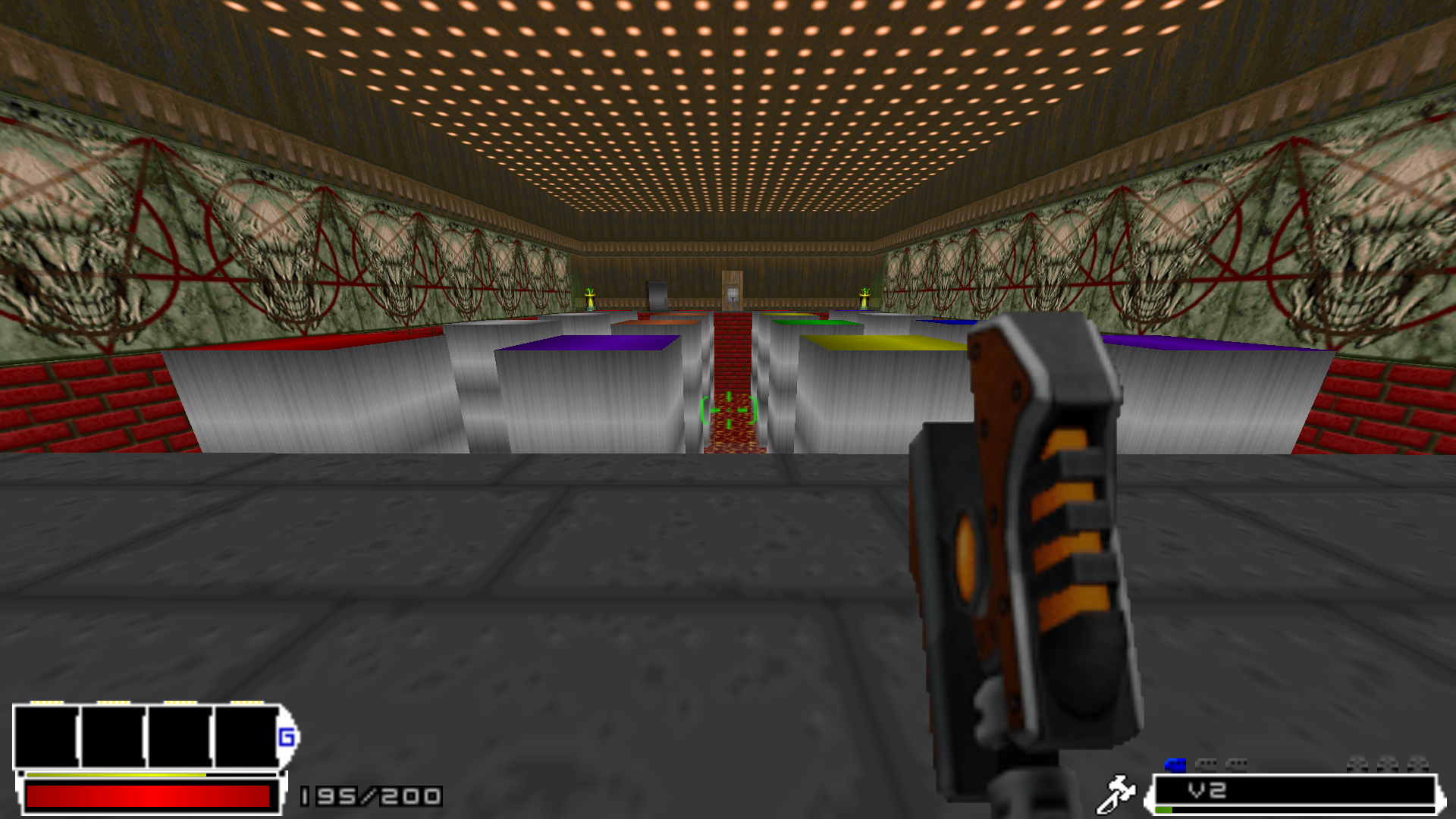 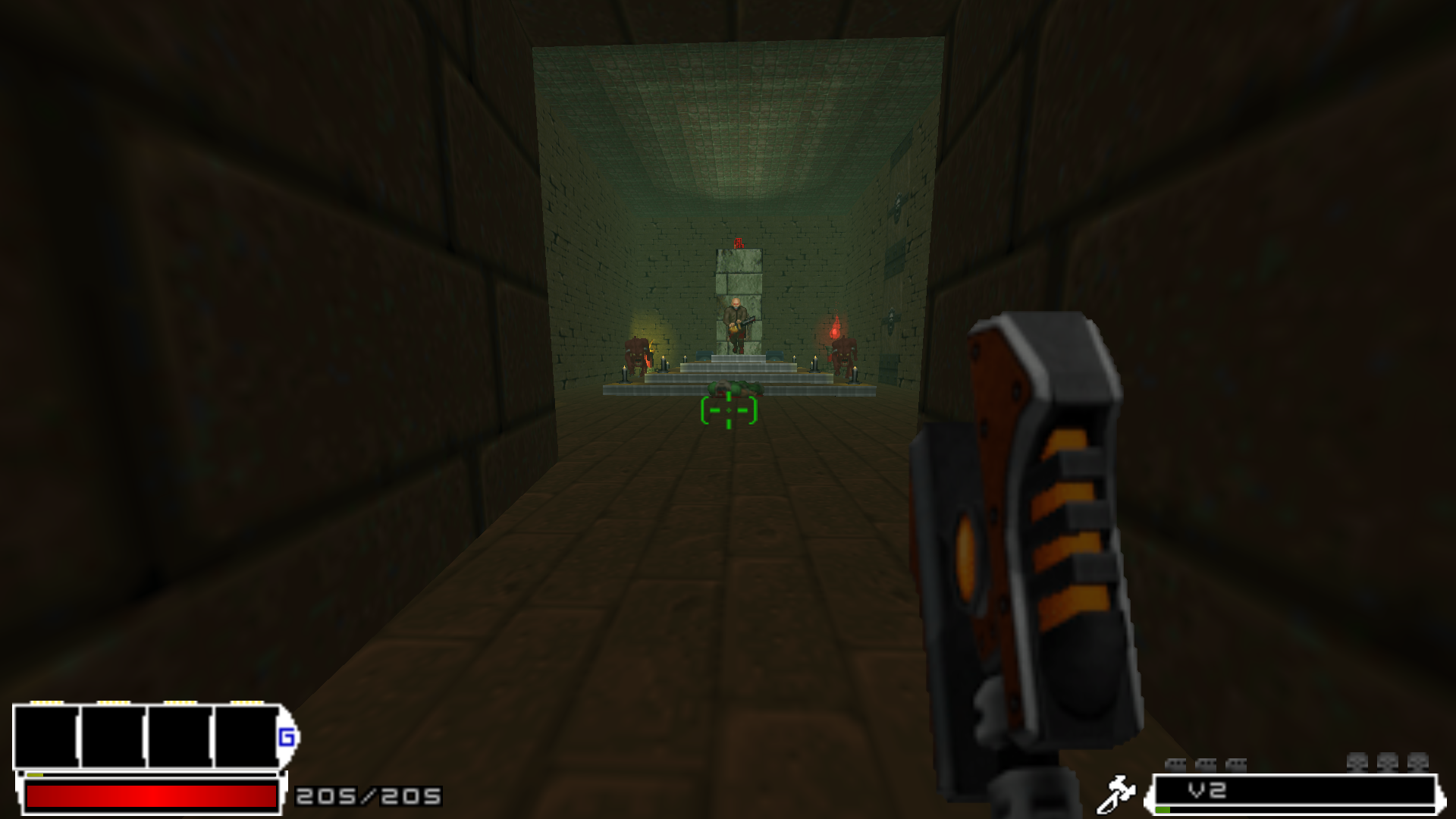 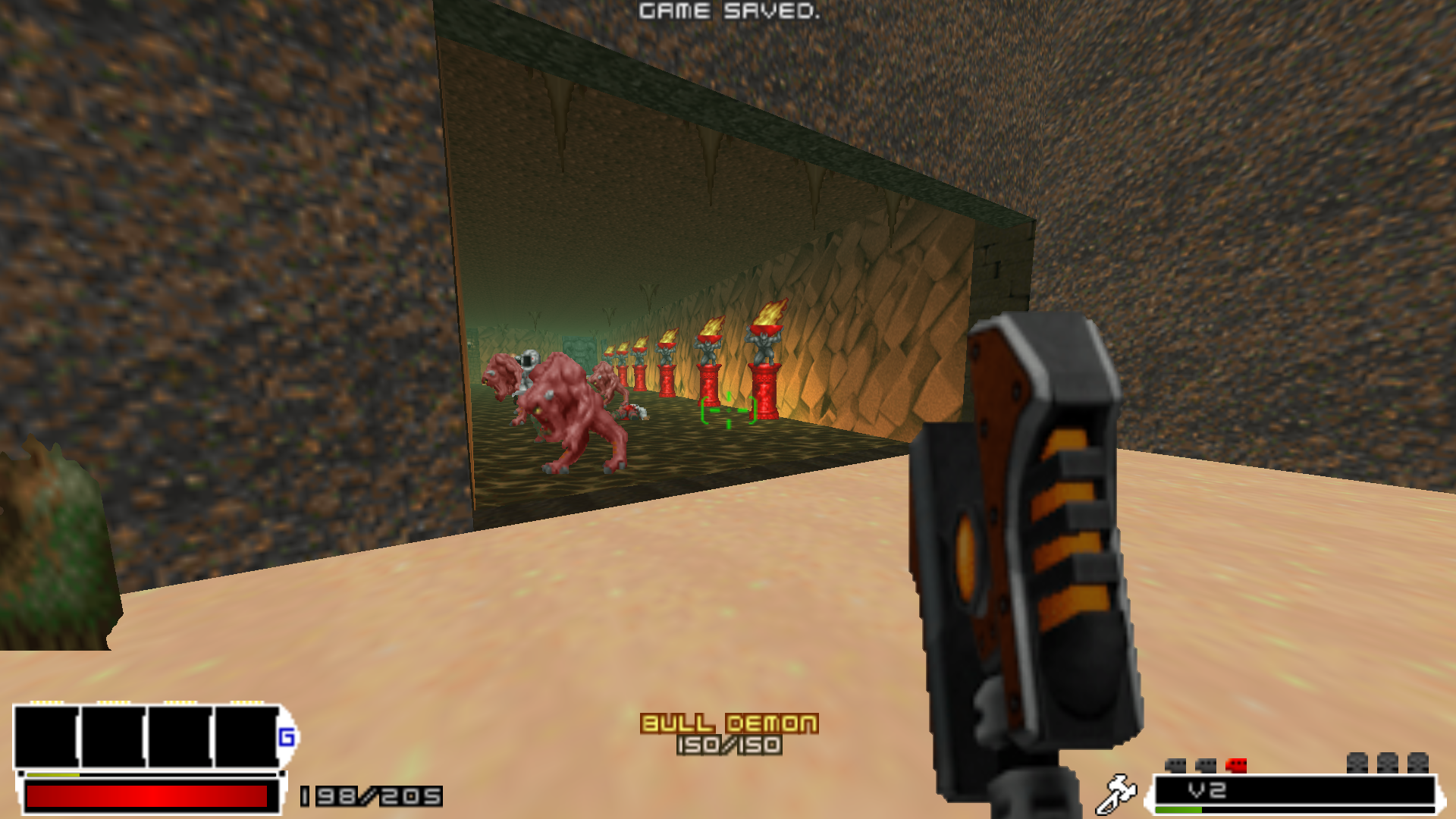 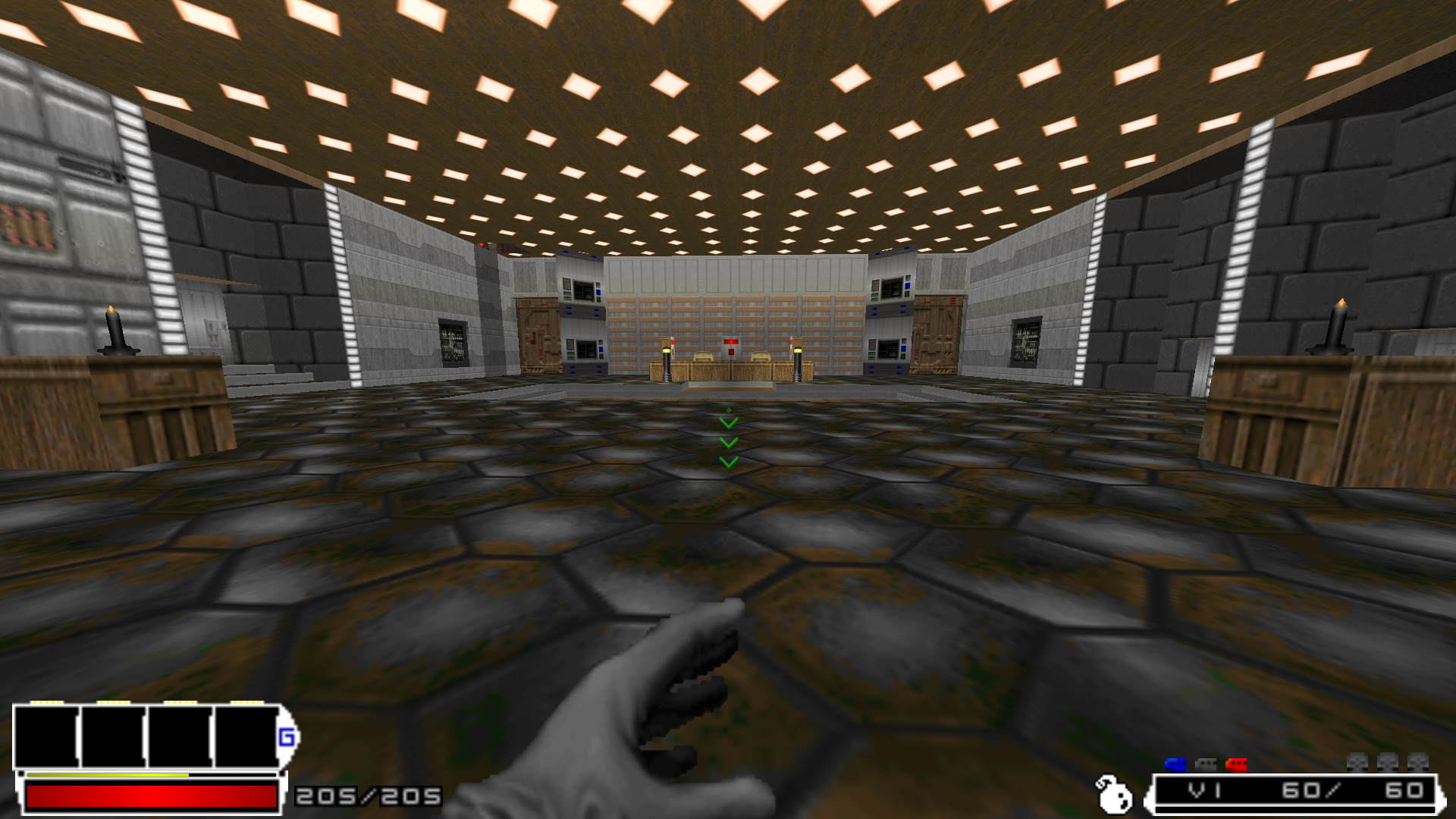 Going forward, I don't expect to treat the rules and design specifications like the Prime Directive. I have learned very quickly that that is just not realistic. What I wrote into them is about 90% there, but for the sake of fun, compromises had to be made.

The next maps I plan to work on will be much smaller than this one, in the hope that I can get them done faster. My focus will be on the final area (The Tower of Power) and Forbidden Summit. They mostly serve as single-room challenges, so they should not take long... I hope.

Since the last update, many sprites were replaced or updated. These include the Chopper (renamed Buzz Blades), Meteor Gun, R.Y.N.O., their V5s, and the Mini-Turrets. This extends to enemy turrets as well. That leaves us with only one weapon pair not using Ratchet & Clank model rips, the Scorpion/Leviathan Flail. For those, I am still stuck.

Previously, the maps were contained in rc.pk3 while their resources were scattered across that file and two others. This is just idiotic on my part, so I've condensed things. You'll find the maps, their MAPINFO data, textures, music, and all of the prop assets in rc-AnnihilationNation.wad. Some things are going to remain in rc.pk3 for ease of testing. VR Training, which still needs some new voice clips to match the altered weapons, no longer uses textures from Reaku's set, so it remains in rc.pk3.

What to expect from WIP #5

For the time being, just new maps. I don't have plans to alter the mod in any way unless some fix is needed or better sprites/sounds come my way. Expect to see at least one of the above mentioned areas completed. It's made somewhat easier by the fact that their last maps are already done.

As always, I am open to suggestion, critiques, or anyone willing to help build these maps. My contact info is below!

ADDITIONS
-Three Annihilation Nation-exclusive weapon pairs: Pyrocitor/Magma Vulcan, Electro-Grinder/Spiralizer, and Spitting Hydra/Tempest.
-Option to toggle dynamic lights, trails, Nash Gore, and debris.
-Arena boss monsters, and their maps, NATION09, NATION15, NATION19, NATION28, and NATION41.
-Secret difficulty, Highway to Heck.
-BOSSTEST map for... testing bosses.
-A punch for every weapon. Monsters killed with this have a 25% chance to drop a 5% ammo capsule.
-Auxiliary/altfire actions for most weapons that lack a scope or detonator. Harbinger and Supernova have gained a scope.
-Sets of prop and trap actors for use in Annihilation Nation. These are subject to being expanded at any time.

MONSTERS
-Made Blots immune to Dance-type damage.
-Ethereal Souls now take time to appear before attacking. They also do not disappear under standard behaviors.
-Poison souls spread less gas. Gas clouds do more damage initially, but this drops off with time as its radius increases.
-Homing Afrit balls are less aggressive.
-NEVERRESPAWN flag added to summoners and Lost Souls.
-NEVERFAST flag added to any monster projectile with a speed of 40 or greater. This prevents them from being impossible to dodge when fast monsters are enabled.
-Orange, green, and black Hellspawn firing patterns are easier to read.
-Fixed some projectiles still rolling a D8 when they should have been rolling a D5.
-Chaingunner fast-fire damage reduced.
-Monsters that can float up now check vertical position. They shouldn't float off into space any more.
-Arachnorb attacks reversed. It now fires a spread normally, and in bursts when hurt or under aggressive behaviors.
-Enemy turret sprites changed for better distinction. Idle sound added. Time between detecting the player and firing increased.

WEAPONS
-A few more sound changes for better distinction.
-Synthenoid reaction time decreases with each level. Self-destruct melee removed.
-Gave weapons the kickback they should have had from the beginning.
-V1 and V2 Chopper fire rate reduced, V3 and V4 fire rate increased.
-Bomb Glove and Meteor Gun damage increases faster with each level.
-B6 Obliterator fire rate slightly increased, damage dramatically increased, reload sound and animation changed, time reduced. Now fires in a horizontal line.
-Mini/Mega-Turret Launcher, Gravity Mine, Singularity, Feltzin Device bombs, Synthenoids, and Zurkons have restrictions on how many can be active at once. Detonator added for clearing the area of them. This is used by pressing the Auxiliary key.
-Multiple Hoverbombs can be fired in succession.
-Singularity ripping damage reduced.
-Soaring Comet homes in on targets. The meteors it breaks into have much more aggressive homing.
-Flux/Splitter Rifle adjustable zoom removed in favor of being able to move while aiming.
-Lava and LN2 Guns replaced by the Lacerator and Dual Cryolators.
-Combustor range increased.
-Tesla Claw and Thunderbolt range increased, spread decreased.
-Hydra Saw damage reduced.
-The wrench can now deflect projectiles. Weapon switching is now possible while the wrench is in flight.
-V3 and V4 Arbiter accuracy increased.
-Blitz Cannon charge shot uses less ammo.
-N90 fires two shots for one unit of ammo, and its projectiles move much faster and do more damage, but accuracy is slightly reduced and homing is removed.
-Bouncer shell sprite changed.
-Decoy Glove and Zapper replaced by the Nanoswarm Glove and Hive Hand.
-All altfire actions aside from punching (scope, detonator, bash, etc.) have been moved to an "Auxiliary" key. Altfire renamed to "Punch".
-Plasma Storm now fires single bolts of lightning at individual targets.
-Meteor Gun, Arbiter, and Decimator damage increased.
-The majority of weapons now have auxiliary actions.
-Combustor, Magmabustor, Meteor Gun, Soaring Comet, Chopper, Hydra Saw, R.Y.N.O., and R.Y.N.O. II sprites changed.
-R.Y.N.O. II renamed to R.Y.N.O. V. Spreads of bullets now fires along with missiles.
-Chopper renamed to Buzz Blades.
-Hydra Saw renamed to Doom Blades.
-Punches can be thrown after the Omniwrench is thrown without waiting for it to return.
-Omniwrench now has an array for its required XP to level up.
-Omniwrench added to the weapon wheel.
-Mini-Turret sprites changed to match enemy turrets.

ITEMS
-Warp Pad beacons no longer factor in vertical distance when checking proximity and make a sound when they disappear.
-Holoshield is now always forward-facing and has been recolored. Height reduced.
-Bolt pickup sounds are much softer and less obnoxious.
-If bolts fall into deep liquids, they will bypass their wait for contact with the floor and begin searching for a nearby player.
-Bolts no longer check for vertical position.

OTHER
-Renamed the Enhanced GFX option to Smoke and Flames.
-Moved graphical options from Mod Menu->Mutators to Mod Menu->Enhanced GFX.
-Fixed key display on the status bar.
-Updated and corrected typos in MENUDEF.
-Added custom help screen.
-Difficulties have been tweaked in order to remove changes to monster health.
-Maximum health in challenge mode increased to 800.
-Textures34.wad renamed to rc-CustomMapTextures.wad. Terrain definitions added.
-XP mutators removed.
-Option added in Enhanced GFX to reposition the gadget icons in the event the player's resolution causes issues with them.
-Combined all arena assets exclusing ACS, monsters, and laser traps into rc-AnnihilationNation.wad.
-Pressing reload only equips main main weapon. It does not equp the wrench.

BUGS FIXED
-Landing on solid objects would not reset the double jump script. Solution: Check for the player's vertical speed in addition to their distance from the floor.
-Sometimes, kill taunts play at the start of a map. Solution: Set the token's InterHubAmount to 0.
-Bolognese and ice deaths caused graphical conflicts. Solution: Use the player's damage type as a flag to prevent the spawning of Bolognese gore.