We are finally adding Ship Progression into the game - check news to see how it works! 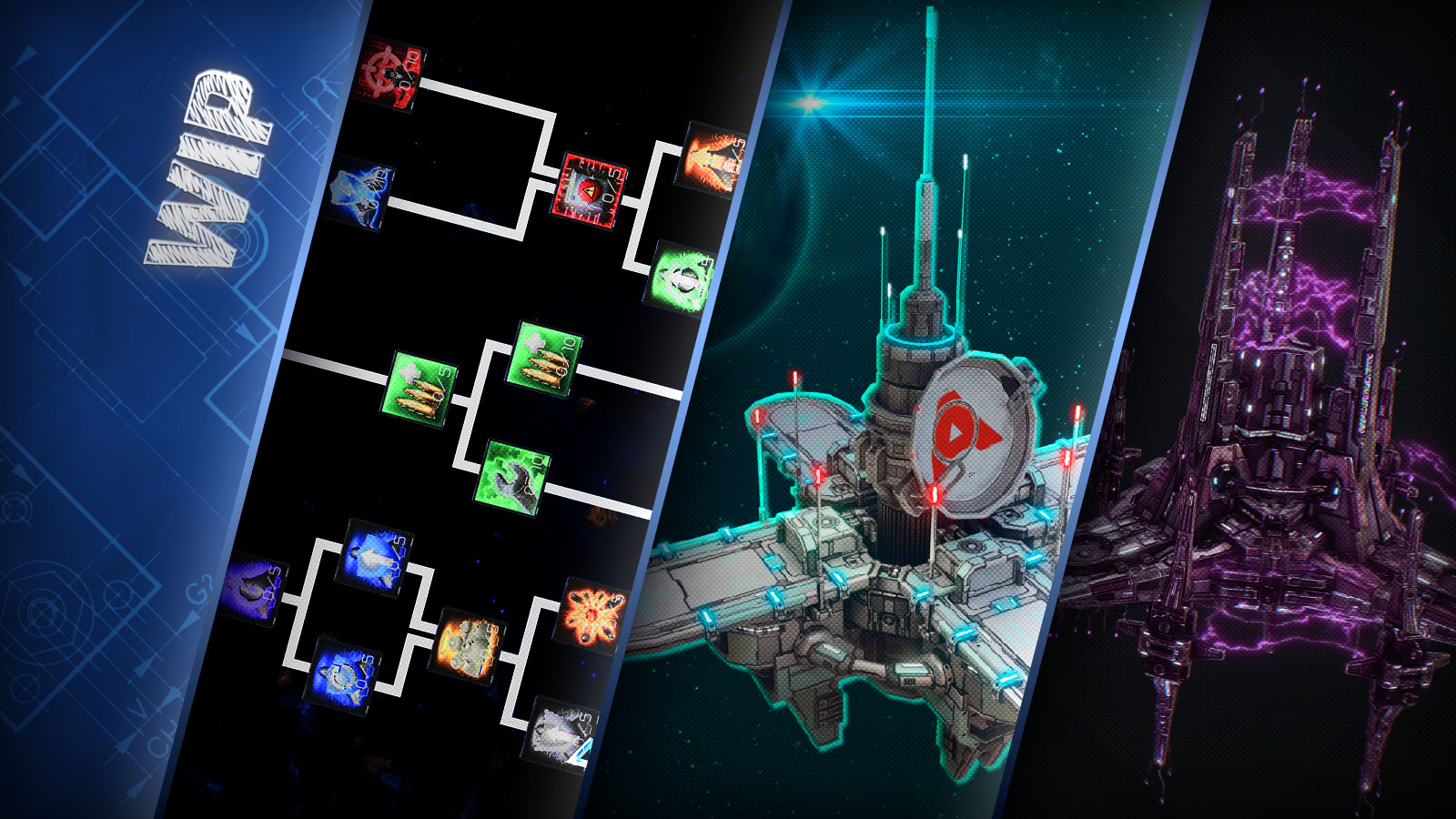 You can't overestimate greatness of this Friday - even the first news part brings so much into the game that uniqueness of your fleet rises into the space. Or farther. Yes, you got it right - we are finally adding Ship Progression into the game, so every single ship, including each modification, each copy of this unit, is going to have its own progression: gain experience, level up and get rewards. There are also two important things to hit the scene: new control point upgrade and pirate base. That's awesome news, isn't it? ;)

Still, our Team found a way to make it exciting for you: each and every ship has its' own talent tree with bonuses not only to simple characteristics, but to special modules, certain weapons or types of damage which logically can fit it, engines and even things like cargo. And all together it gives you so much variety in building each ship, and a lot of lovely hours to our game designer who is currently busy making 180 skill trees. ;)

So, how can you advance your ships? Just the same way you do it for leveling up your character, except of you need to actually take an active part in the battle with the exact ship:

Note: Ranked Match doesn't provide an ability to level up your ships.

The more you use a single ship in the battle, the more xp it gets. In total, there are 30 levels for each ship and each of them can reward you with a special bonus on your choice.

By leveling up, you get ship Mod Points. Mod Points, Modification Points or MP are given one for each level and can be spent on different Mods (upgrades) for the ship: it can be something simple, like a slight increase of ship maximum speed, shield regen and so on, or a bonus to cooldown, range or area of effect of certain modules. Moreover, for some ships, as an Alpha Mod (mod from the bottom of ship progression tree) you are able to choose one module to become a built-in equipment for this ship: it means that it doesn't consume any space or capacity at all and is in your ship by default. In other cases ships can have a sufficient bonus to special modules as an Alpha Mod. Here is an example tree: 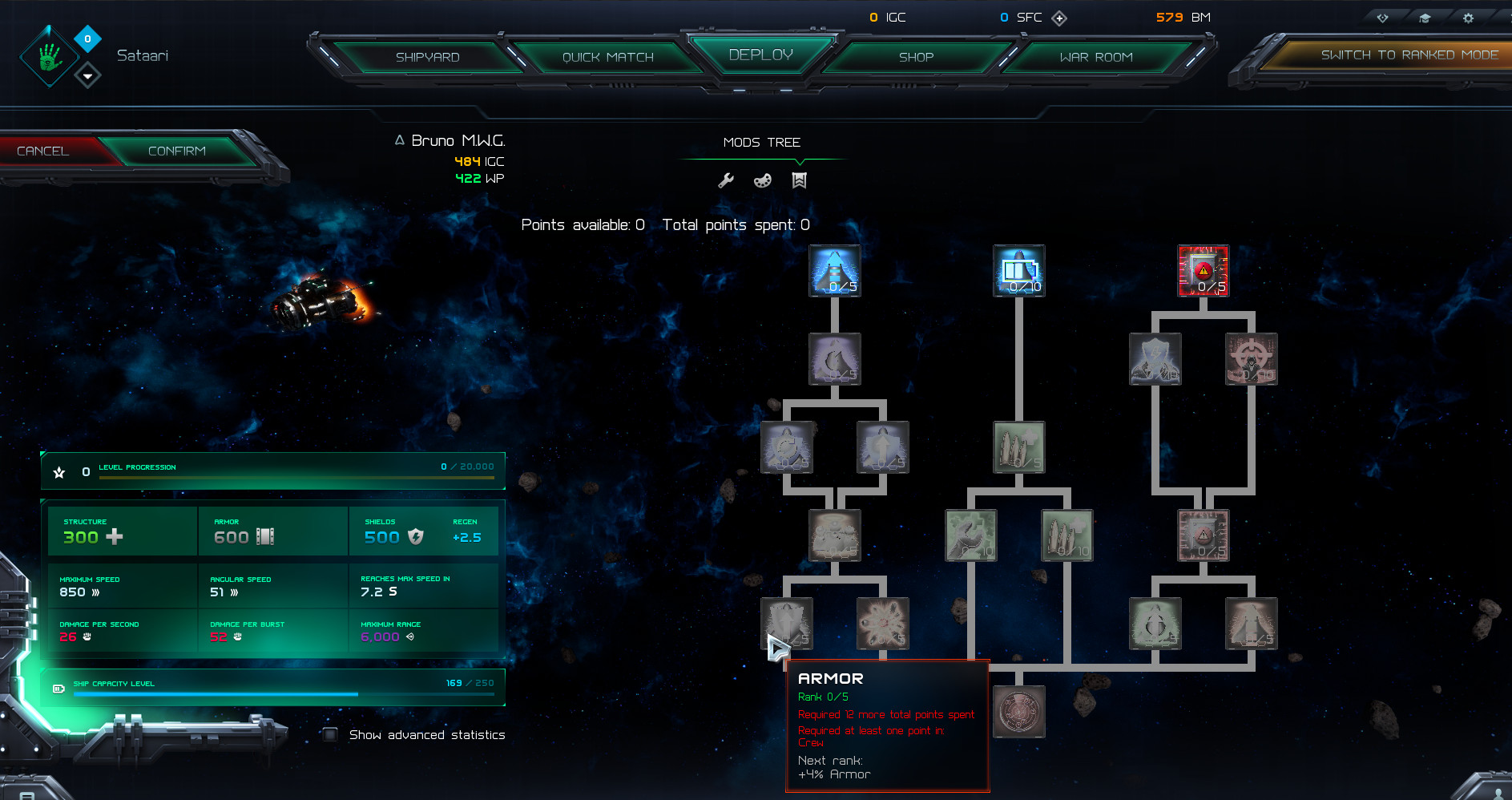 Note: This is not a final look of Mods Tree - all icons and other parts are a subject to change.

As you see, some Mods can be accessed only if you spend MP for a previous tier: each new Mod row requires Mod Points spent in previous rows - this way you can't acquire Alpha Mod before you reach level 15, even if you already opened the path to it. But it also provides you with some freedom: there is an ability to, for example, ignore Alpha Mod and spend all Mod Points you have on passive bonuses - it's up to you how you distribute them. Just make sure you really want this Mod as there is no way to redistribute experience points right now (of course, it's somewhere in our plans).

Hey, and we remember about ship naming! This ability is still in our list, despite all the changes - we are looking for the opportunity to add it later as a reward for ship achievements, along with decals (emblems) and so on - expect more surprises from our creative Team! ;)

Battle Stations, Warp Stations and Outposts are three important structures each quick match player should now about. In case you forget or have just started watching for Starfall Tactics news, we remind that in quick PvP or PvE matches, you have Control Points which you can capture and upgrade by spending 1000 warp points. These Points provide additional resource income to let you continue warping in ships, give you certain other abilities and are really important object on your way to the glorious victory. 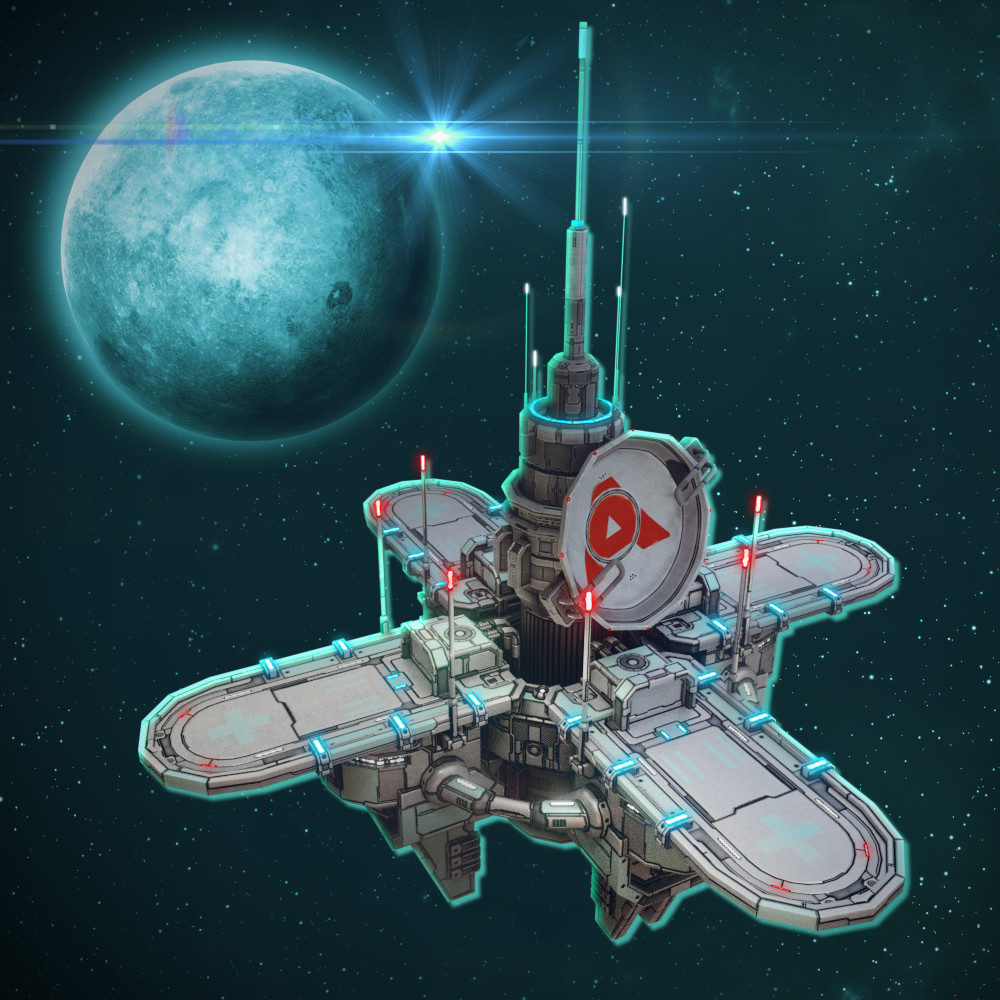 Now we are adding another one to let you build new strategies and give more choice on the battlefield - Support Stations. This special upgrade costs 1000 points while providing you with a quick repair and ammo dispenser services for all nearby ally ships, helping stand against opponents longer or simply recover ships after the battle without a need to make a long way to the Mothership or spend a repair drone cooldown. Amount of hit points and ammo regenerated with time for this Station is equal to that restored by Mothership.

Hope this upgrade makes you Ranked matches more intense - be sure to share your thoughts and experience with us once you try it ;)

Just a week ago we published a gif featuring an unknown space building on our Facebook and Twitter pages.

And today we are ready to lift the veil and tell what was this structure for and finally show the full model.

Meet P.Y.R.A.M.I.D. Mothership in all its glory!

"...the origin of the third band goes into the depths of history, when Vanguard and Eclipse Inc. were not yet ready to be at each other's throats. It was in those times, in the year 2853, when some of the military researches were declared "inhumane" and "contrary to human nature". But some scientists continued their researches. Soon there was a wave of arrests, but several scientists managed to escape to the periphery of inhabited systems, where one could not be afraid of the harsh hand of the law. It was there that the organization "P.Y.R.A.M.I.D." was founded. Nowadays ideological descendants of those scientists are still developing technologies, which will make unprepared reader's hair stand. They raid inhabited planets from time to time, looking for resources that can help continue their research."

See you next week - expect even more exciting information on upcoming changes & content!