In this update we detail what we spent our time doing in the third week of our prototype sprint.

The Buoy - The Processing of Developing

Hey guys. So after about a month from the previous blog I’m here to tell you about the development process we went through for our third (technically fourth) prototype of the year, The Buoy.

After finishing off our second week on the Caveman prototype we were a bit stuck on what the next game idea was that we all wanted to work on. There were multiple game ideas going around and it ended up being narrowed down to two game ideas per person. We wanted to choose a prototype that we could complete within a week compared to the two previous ones that we spent about a fortnight on and after a lengthy discussion we ended up choosing the Buoy.

The original concept for Buoy was developed by one of our artists/designers Tom a while back. The aim of that short prototype was to stir up a sense of dread of being exposed to the deep and seemingly endless ocean without ever showing an enemy or threat. It was inspired by a small selection of indie games such as Yeti Hunter, Amnesia(THAT water section) and SCP-087. The game was about you, the player trying to swim to the safety of a far off buoy after your boat has capsized. Another aspect was evoking the sense that an enormous ominous entity was following from beneath without actually showing the being completely via using sound and subtle movements beneath the ocean. There was actually an IndieDB page for this game, which is still around if you search for it. That prototype was to be released only development ran into snags, the key one being that Tom can’t program for sh**. I’m kidding. He just wasn’t happy with releasing the game in the state it was in.

So after deciding upon which prototype we were going to work on we sussed out who was assigned to each task and what we wanted out of the further development of it. We would concentrate on what happened before the boat capsized and wanted to focus on the exploration and adventure side of Buoy instead of the upcoming horror. Korver, Tom and I were doing the various art assets, James the music and Alex got stuck with the programming as usual because he’s Alex.....he’s also our only programmer so he has no choice but to do programming and particles on the occasional need ( I don’t actually know that for certain =_=).

Art Assets and Their Purpose 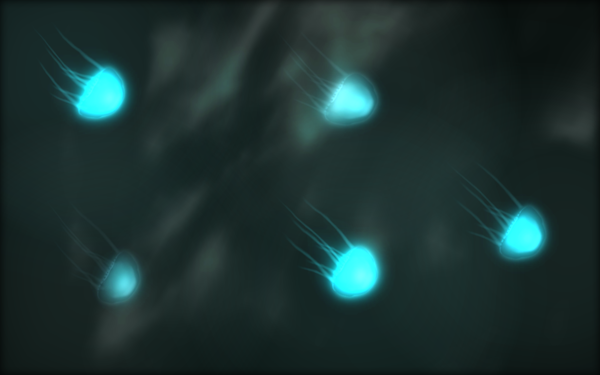 One segment in The Buoy that we intergrated was the school of glowing jellyfish to swim under the players boat as a stark contrast to the gloomy ocean and atmosphere beforehand. The school would then abruptly get enveloped by a mysterious gargantuan creature as a foreshadowing effect of what was to come later on. The scene was somewhat motivated by Life of Pi with specific scenes of glowing sea critters. I was supposed to be doing the jellyfish at the start but then Tom and I ended up switching tasks on the first day we started the project. The jellyfish were made of two varying shaped planes, one for the body and one for the tentacle each being 2 tris. This meant that the animations of the tentacles were limited to swaying straight rather than wriggling about as seen in real life.To counter this Tom played around with the refraction of the water that gave the tentacles the illusion that they were swirling about making it seem as if the jellyfish were moving around the ocean . An emissive was added and was animated to give the jellyfish a dim on and off glow. 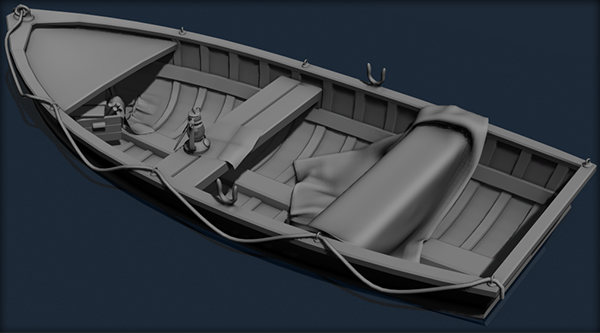 The fisherman’s boat was done in 3ds Max and various props were added to the high poly (ropes, stash box, cloth and a lamp). Korver started with the high poly and did a lower poly mesh to bake on the details. Unfortunately the textures weren’t completed by the deadline but the boat was put into the end prototype.

Hands to me are one of the hardest things to model. It screws with me how someone can make a good low poly hand from scratch because of how complex the topology for a hand has to be taking into consideration that the hand will be rigged.I started out modelling the fingers and thumb and cusping portion thats attached to it in Maya and then modelling the palm and refining the shape of the fingers in 3d coat before retopologising the whole hand for rigging. The hand couldn’t be put into the game at end because of rigging issues though which was a shame.

Most of the time was spent on the rowing controls of the boat. We wanted to use the right and left triggers on the xbox controller to control the speed and strength of each stroke. So slow powerful strokes that would allow you to drift if you pressed and held down and quick faster taps of the triggers would mean you would row faster. After a few hours spent on it though Alex figured out that the controller was designed so that if both were pressed at the same time it would cancel each other out .The resulting value would be the difference between when RT and LT would be pressed so if both were pressed at the same time it would do little to no movement of the boat. In the end we resorted to having the triggers only control which oar will be pulled at a preset speed. Testing was done on how far the boat would move with each stroke and optimized it so it felt like there was enough progress with each stroke of the oar near the end of the prototype (despite what the actual reality is with boat movement which we had to compromise for the good of the player... maybe).

And thats pretty much it. Despite The Buoy being chosen because we all thought it could be finished in a week we didn’t quite get to the level of completion we wanted by the end of the week. It would’ve taken possibly another week and maybe should have minimised the scope of the prototype. We’re doing blog posts on a monthly basis so we should get another one out by the end May. Stay tuned.I won’t be making the next blog post so have some tuna.