We suddenly just went silent for two months. A totally strange situation that we have finally decided to explain. Even our concept artist was worried!

Torque Game Engine Advanced is a pretty fine engine, but up until a few months ago, frame-rate was flying downhill. We couldn't explain it, 'something' was eating those precious frames! We toned down the shaders, disabled all normal maps in the engine game, and split apart brushes to ease the rendering. The engine was still suffering, it seems we've just pushed it over the edge.

UDK finally emerged onto the scene, and immediately caught everyone's attention. We looked at TGEA, then back at UDK. The choice was clear. 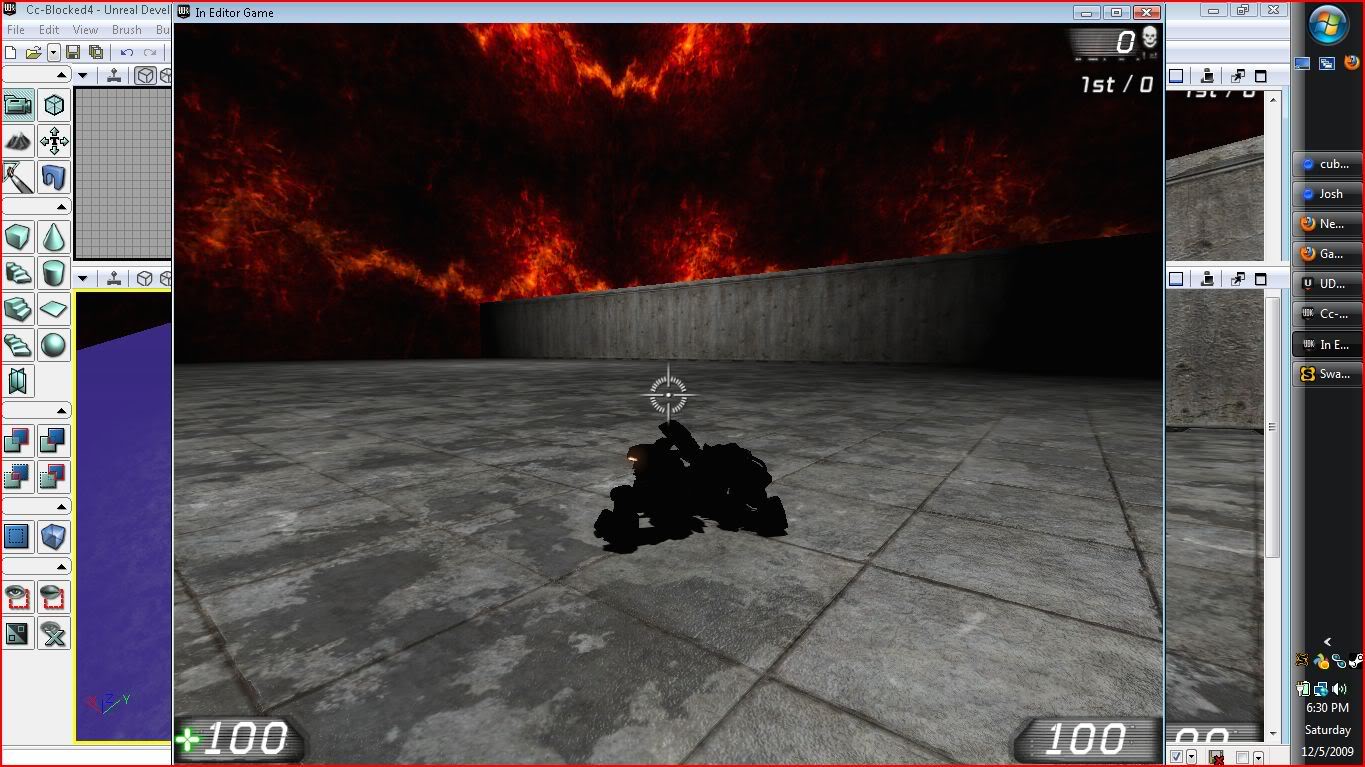 After running test and cooking a very small build, we soon ran into a large amount of problems. Suddenly the team become very contested.

No one was able to decide if we should finish the jump to UDK or go back to TGEA. Then somewhere along the lines, FoTacTix suggested Torque 3D.
None of us could argue with that! After-all, its a similar architecture and modernized graphics. 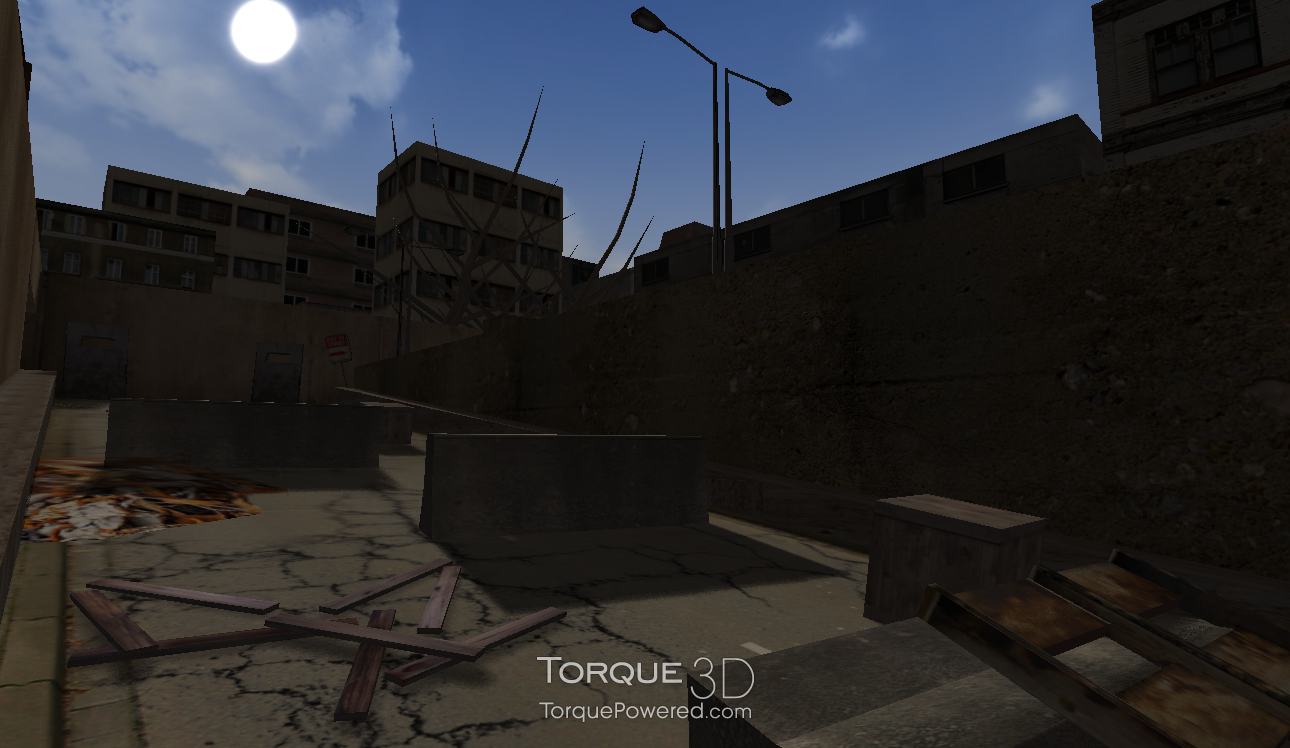 While even our example pictures are, in fact, quite miserable (They were made by a programmer after-all); we have great plans and a lot of re-structured ideas.
I'm sure not everyone would agree with another engine jump, as it causes many problems, and some would even say the UDK would have been a better move, but we're sticking with our decision and we hope we'll have some major updates soon.

So great that your staing with Torgue. UDK sucks!

And what's wrong with UDK, again?

Read the article :p not everyone was satisfied with the engine + they had some problems xD

UDK is awesome, but they obviously found trouble porting over to it.

I personally dislike the torque engine. and the TGEA. I love the quake 3 engine and the ET version of it though :D

Porting over to the UDK Engine would be a great idea! Forfeiting such idea would be as disappointing as a very promised mod entering its downfall(dying). Besides Torque's engines rather suck (too low-poly for one). If you want your game on a good engine UDK is the PERFECT choice.

Just glad to see you are still in developement!

Rather disappointed you're not going with UDK, but... We'll see what happens. Glad to see things are happening, best of luck to you all!

Torque 3D will inflate costs, though, won't it? It couldn't have been merely a suggestions, considering that's at least what, $500 for each person using the engine? Not exactly sure the upgrade pricing.

However... If you're using Torque 3D, can we expect to see a web portal to Crimson Crow, a la Instant Action/Blurst? THAT would be most excellent, and a point over UDK.

I've been researching instant action for some time. I don't see why not, but its not a guarantee at this point.

Interesting. Didn't know that, wish I had $100 to spare right now!

I figured it wouldn't be a guarantee, but it'd definitely be neat.

Ah, wait, I see... The Binary version has $150 off for 30 days. Right. Interesting that Garage Games is going that route, it's good for pockets obviously, but after how long they've been touting that their engines are affordable, -with- source code, seems they're shooting themselves (from a moral standpoint) in the foot.

I for one like that they're not jumping on the UDK bandwagon.

Didn't I suggest doing that a year ago?
Things move slowly in development until you reach a certain point of no return. Once all's set there is no hesitating and only lots of good action involved. It's the waiting times between decisions and developments that get to you.

In fact I think this has happened more than once?

Probably more to do with not understanding the Unreal engine than it having 'problems'. Care to explain the difference between Torque Advanced Game Engine and Torque 3D? Seems they have a huge amount of different engines.

Honestly so far its really a more modern engine, with a more thought-out editor, web publishing, and collada abilities.

The more I use the engine the more I learn about it.
I think I'll eventually write a review.

Both engines are damn and good and both have their own problems and limitations.

i have not advice for Torque 3d or UDK

I barely can with everything on the lowest setting.
My poor laptop isn't too powerful.

I'm not sure I really understand these sentiments. I mean, it's the engine to a point, but also the content being run. From my experience, Unreal Engine is -very- optimized.

I can run the UDK demos with little lag, on low resolution.

However, I can't run the Torque3D demos anywhere -near- playable framerates. Even then, the UDK demo looks prettier to me overall.

And even -with- all that, just because UDK supports 'x' shaders and 'x by x' textures and such, doesn't mean they all have to be utilized.

At its core, Unreal Engine seems more optimized than Torque 3D than me, and by using less effects and lower resolution textures, you could make it run even better. Which you can do with Torque 3D as well, but as said, there appears to be less leeway.

Just pointing this out, that deciding on Torque 3D because of optimization makes no sense to me.

Unreal is INCREDIBLY optimized. You could get better framesrates with higher graphical settings vs most other engines out there. Hell just compare it to the source engine. It loads more in faster, and looks better afterwords.

Also a big problem you will have with UDK if you can barely support the game, is the editor will crash, a LOT. You want good processors, more then anything.

Ironically, all the T3D demos lag for me as well. For some reason the empty desert causes my character to skip like a mad-man. Its normally better optimized than that.

The editor crashes all the time for me. I just figured it was something I was doing.

Dave, why aren't you online...lol

UDK seemed great, but it would have slowed us down even further. Actually, we would have had to rebuilt the game from the ground up.

Sorry, wasn't on IM. I had to leave for work in 15 minutes, otherwise I would have been.

Man I am so glad to hear stuff from you guys again, not that I thought you had ever died. And a new engine it seems, good luck with it and I hope you can get some more updates out!

The first engine is more "realist" like stalker for me, Udk is.. Different, when i play bioshock, fuel of war they have so much effect (like bloom, bump..) the npc looks like a plastic skin. But it is really new engine with more choice, and nice engine. It is just my advice and it is why i have not prefer engine

Its not the engine that chooses how much bloom or bump mapping is in a game.

I just hope whatever you chose has very little lag.

Well, I've been thinking about using UDK for all of my games, but I'm sure Torque 3D will still be great for your game.

Great to hear development is back on track, I've been looking forward to this game and still am. Hopefully a beta soon as you guys have finished moving to a slightly newer version of Torque which shouldnt take to long as it's pretty much the same engine (I thought that anyways).

Never tried UDK though when I tried an Unreal Editor, it confused me. Probably not used to it's UnrealEd yet. I also recommend you try out Unity. It's pretty good from what I hear.

Actually I did try it out, ended up not really knowing how to use it. It has a very neat 'publish to web' feature which I found pretty cool.

I've been playing FarCry alot lately, so the tropical theme in the demo beginning really worked for me.

Don't know if its right for us though. I see a lot of similarities, but then whats the point of switching?