So, we have a date. It's not set in stone 100% but the mod is finished. There'll be a few last minute tweaking and adding just a few more things, but it's finished. 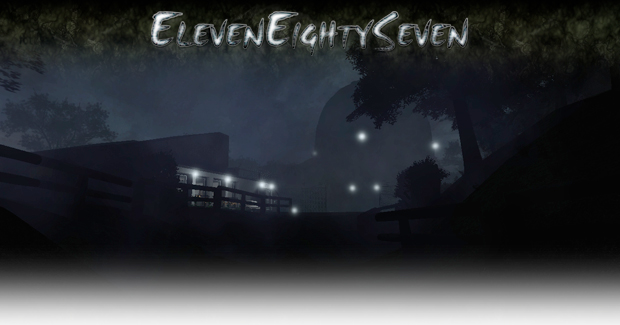 Well, it's time to finally give you guys a release date, and it's this Sunday.

I could've spend an eternity refining the mod. Instead of doing that I'll take it as it is, and will use the gained experience from 1187 - Episode One to Episode Two.

I've spend three years working on this thing, and I'll admit there are some things I would've done differently if I started the mod now. But that was my goal in the first place, to learn. I've overhauled even the first maps, scenes, textures and what have you countless times over, but it really is time to say we're done. I do believe that myself and the team have created something we can be very proud of. And I hope that you guys will appreciate the effort put into this and have one heck of a good time when you start it up.

The only thing that we won't be releasing just yet is the audio commentary. We're not done recording it, but it will be released separately once we're finished.

The mod stands around 5 hours long, depending on how fast you play through it. Those who will rush through the game will miss quite a lot of stuff, since we have quite a number of secrets and optional content being offered throughout the mod.

Those who take their time and explore the maps will be rewarded by doing so. Also worth mentioning are two facts:

1: The mod is tougher then Half-Life 2. I've played it on medium throughout it's development and I recommend others to play on that difficulty as well.

2: The mod is big. seriously, it's around 2.80 gigabytes once you installed it. I've done my best to keep the file size in check, but once you create and use this much custom content, then it's inevitable that it gets to this size. Not only did we create tons of custom content, I also asked permission and even been offered to use content from other developers, so A huge thank you to them, and you'll find them in the credits list.

Also, Note that the mod will run slower on older PC's the lowest I can confirm is a single 2.4 processor with 512mb RAM and a Geforce 7200, but that's really stretching it and you'll have to compromise certain features like HDR, and other video/sound features. I did my best in optimizing the heck out of the maps, but man, optimizing takes tons of time and it's a tough process, so I apologize if it's not the best.

Then there's other news :
We have a website. It's not the best, and there's not all that much on it, yet, but it's there. I hope to see you guys on the forums there because I and most of the team will be on there after the release hits. If you have any questions or want to start a discussion, feel free to head over to the forums and ask / chat away ;)

Wix.com
I also would like to point out that I've spent some time in creating a game manual. It will cover pretty much anything important from the hud display to the button layout and even character info. It really helps giving it a read, and a long with that, playing the crash course. The crash course is our version of Half Life 1's Hazard Course. I loved the Hazard Course and I felt it'd be neat to have it return for this mod.

Other then all what I said there's not much else to mention at this point. The mod's been play tested as much we could with quite a big beta test team, and I think we really got anything that might break the mod. Its been one heck of a ride but it's been fun. So yeah, Thanks to everyone involved with this project. The team members, the testers, even people that wanted to help but couldn't, and of course the community here on ModDB.

Ohh yeah, for those who might not have noticed, this is an HL2 Episode 2 modification.

I'll leave you guys with the official trailer, it's pretty much the same as the one I had in the header, only it's been tweaked a bit, and has one new shot.

To make it clear, however : I'm aiming for 17 October 2010. There's no reason to not make this date, but if something does come up and I have to delay because there's something in need of fixing, please be warned. I rather have it fixed before rather then after release. Even though the mod's been tested enough for it not to break, at least not for us, but you never know what some people out there might accomplish.

Thanks mate, I'm doing all I can to make the release date.

Seems to be fun I am going to play this mod for sure!

YES! Tomorrow! I will absolutely download this mod! hope there isn't a delay, its so close.

Well I may have to reschedule my itinerary for Sunday and hide with this in my " Man Cave " ! I'm psyched !

Yay ! Finally ! My mod of the year is actually "Nightmare house", i will see soon if he got a challenger ! :D

At long last we can finally release this mod for you guys and show you all something we're proud of. Thank you all for your support once again!

omg! a modo that is actually going to be realeased! tomorrow!!

Yeah finally ive waited for this !!!

Are you going to work on mortewood plaza after ? Because it look like a really good game because i love to kill tons of zombies and get new weapon and use funny stuff to kill them !

masterpiece mod, i want it, the sooner, the better.

Its going to be released tommarow? I remember playing this mod back when you released a demo, im so happy that i'll be playing the FULL version tommarow.

How humble and such an interesting but fine post for a release, thumbs up.
Will likely give this a shot because of it :)

Been watching this mod for sometime and It feels like yesterday i first saw it, and today its same as then: Awesome :)

Great news! Been watching this one for a while. Great to see it's some close.

I might break down and get the Half life 2 games for my PC just for this mod.

I thought it would be coming in December. What a surprise! :D
Anticipating release, but I'm a bit worried about specs. You said 2.4ghz and an Nvidia 7 series is stretching it. I'm guessing an intel chipset and 1.8ghz would not even be playable. :|

Trust me, it's not totally like that. I have a small change in texture quality and my crap desktop can run it.

Well here it's Sunday 17, 7:08pm! I will be sad if you don't release this today... (I mean its perfectly understandable but I've waited for this soo long) I'll be waiting....

And so, the release date ended up slipping by. :\

Looks like they pulled a Black Mesa Source. :P

Awesome work! I loved to see the mod growing and getting better and better. And now? Its released and Im on holyday without pc. Wtf? I wanna play it :V