Learn about the gameplay of Drovoid, its unique features, the release plan and more.

After spending a lot of time recently on IndieDB, I realize there are many great 2D space games in the works. That's fantastic news, I love 2D space games :-)

This also made me realize that I did not explained yet what Drovoid really is about, and what makes it unique.

Gameplay
Drovoid has two nested layers of gameplay. The outermost layer is a blend of tower-defense and exploration, as you build a base around your space gate to defend it against increasingly more powerful enemy waves (sometimes in great numbers). 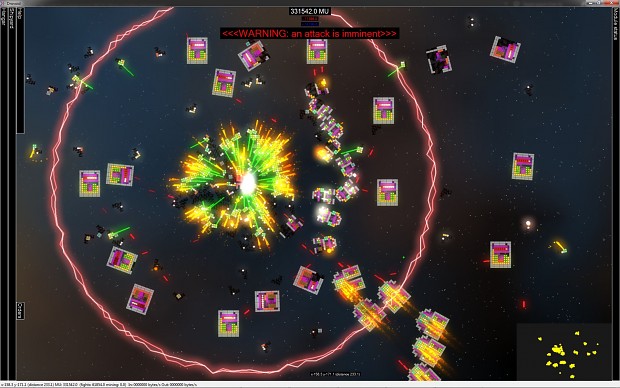 The exploration part comes from the need to gather resources to build your defenses. Resources are gathered by mining. However, most asteroid fields are guarded, so expect a good fight before gathering precious ore. In addition destroying enemies also provide resources. So this is not only about defending, but also about taking the offensive! 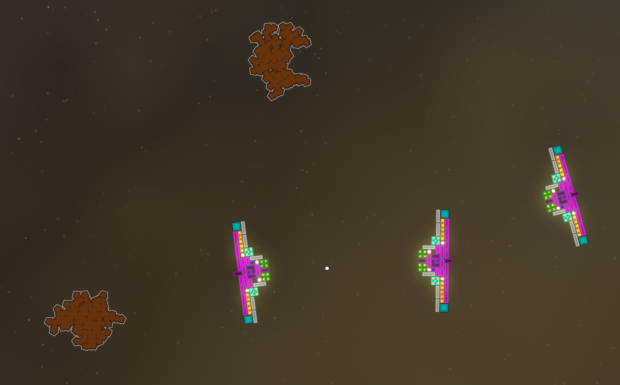 Your end goal is to secure a viable base that can sustain enemy waves and gather resources automatically. And that leads us to the second layer of gameplay:

Ship design and automation
In Drovoid ships are designed by assembling modules, with a very important twist:

The behavior of a ship and its abilities are entirely and solely defined by the way modules are placed. Just by looking at a ship you can tell exactly what it is doing. Looking at a ship in Drovoid is very much like looking at a circuit board, only that the circuits light up to reveal their status. You can see power sources (red), conductive tracks (orange), data buses (pink), logical circuits (purple) and all actuators (thrusters, lasers, etc.).

Designing ships, and in particular automated ships, involves a puzzle/logic gameplay, as you route power and information to all the modules. Yet, this remains very simple and accessible because everything happens by assembling the modules in various ways. There are no hidden parameters, no programming language to painfully learn, no manual configuration to fiddle with.

Another important element is that making simple ships is very simple. To see this is, check out the first tutorial videos.

Think this is great? Wait for the best part: When a ship gets attacked, destroyed modules stop working properly. Therefore, a great ship design will plan ahead for failures, and protect vital parts! Redundancies are important, as well as independent targeting systems, that can continue blasting at enemies even after major system failures. It is fun to see how a ship strives to survive, leading to unexpected behaviors and (often) spectacular destruction after massive failures.

The Arena
Wait, there's more! I have always been fascinated at the idea of Core War (automated programs fighting each others). My take on this in Drovoid is The Arena. Each registered player will be able to upload one ship to the arena. These ships enter a global contest for the best automated ship design!

The Arena will be free to everyone: select two player-created ships and they'll fight for the title. Ultimately the result of these fights will be aggregated in daily rankings.

Multiplayer
Wait, there's more! (again!). Did I mention that Drovoid features a multiplayer gameplay? The game includes a stand alone server so that you can host your own universe and let other players join. Expect challenges of epic proportions! The gameplay is currently the same as in solo play, the major difference being that multiple players compete for the same resources!

Plan to release
Drovoid is almost ready to be released in alpha with all the aforementioned gameplay elements. One remaining challenge for me is to fine-tune the game balance. This is difficult to do on my own and for this I'd like to gather a community of enthusiast players around the game.

The alpha release will happen in three phases:
Phase one (current) is to create tutorials. I am worried at the idea of releasing the game without a good set of video tutorials. I might be wrong on this, as it can be fun to discover the game from scratch. Please let me know your thoughts.
Phase two (very soon) will be the release of The Arena. This phase is meant to test the engine compatibility. I developed a custom engine and while I do test on several hardware (NVidia/IntelHD/AMD) who knows what can happen! The Arena will be free to everyone, even after the release of the game. This will be a good way to verify that the game runs smoothly on your computer.
Phase three (in April if everything goes well), the alpha will open. I will be selling the game in alpha stage for a small price (tbd). Players will get access to all future updates, will be able to upload ships to the arena, and will get the stand-alone server as a bonus. The sales will help fund the online part of the game (servers, bandwidth) and additional music tracks / sound effects. When the alpha opens I'll provide a comprehensive plan for future developments, in the meantime ...

What to expect next
First, expect more modules, more weapons, more possibilities to combine things towards powerful effects (keeping game balance in mind!). Second, the exploration part of the game will be reinforced. I won't reveal too much, but let's say that asteroids may not always be small and that space may be less flat than it appears :-) Finally, I really would like to push the multiplayer and online aspects of the game. Drovoid has been designed from the ground up to be multiplayer. Imagine a persistent server where players try to colonize space with automated ships, spreading destruction or defending against it! This is already a reality with the server (and the auto-save system), but with more resources I could run dedicated servers opened to everyone, or running specific challenges (such as daily co-op attacks on a very large NPC base!!).

I have a lot of things already planned, but this depends on how the game is received and this depends on your feedback! I made the game I wanted to play, and I play it a lot :-) My great friend, Torry, has been helping with play testing from day-one (back in 2010!) and we have tons of fun with multiplayer sessions, designing ships and challenging each other. If the game generates interest and finds an audience (beyond us two ;) ), I am more than ready to expend and develop the game beyond the current features.

Ok, long post, but so many things to discuss! Hope you'll find the game interesting. If you haven't already, watch the pre-release trailer to see all these features in action!

It's good to have a wiki or video tutorials to introduce the gameplay to your customers, especially if you lack an ingame tutorial to guide you through the essentials (how to build a ship, how to gain resources, how to defend your base): Personally I would leave it with the basics and let the players explore the rest by themselfes - to me exploring the game (gameplay as much as environment) is a major reason to continue playing a game for a long time, especially with the ability to build whatever ship i like and challenge my friends.
Overall it sounds like a solid gameplay with lot of fun, definitely will be tracking this.

Thanks for the feedback! I'll continue doing a few videos focusing on the basics, but will be careful not to reveal too much.