July Anarchy Prologue has been out for a couple years. If there is ever a follow-up, it's even more ambitious than the original vision of the mod, and might not use the Neverwinter Nights Aurora Engine at all.

Getting hooked on your own game may be as egotistical as kissing yourself in the mirror, but that's what I've been doing since 2010. Once a week, I'll load up the Neverwinter Nights mod July Anarchy Prologue and play it start to finish. I spent two years making a mod that lasts four hours, but those four hours contain a lot of things I've wanted to see in an RPG for a long time. While I'm still working on Static and other side projects, I keep coming back to the urban-fantasy universe behind July Anarchy, and wonder what a full-fledged Dyarodian Era RPG would look like. 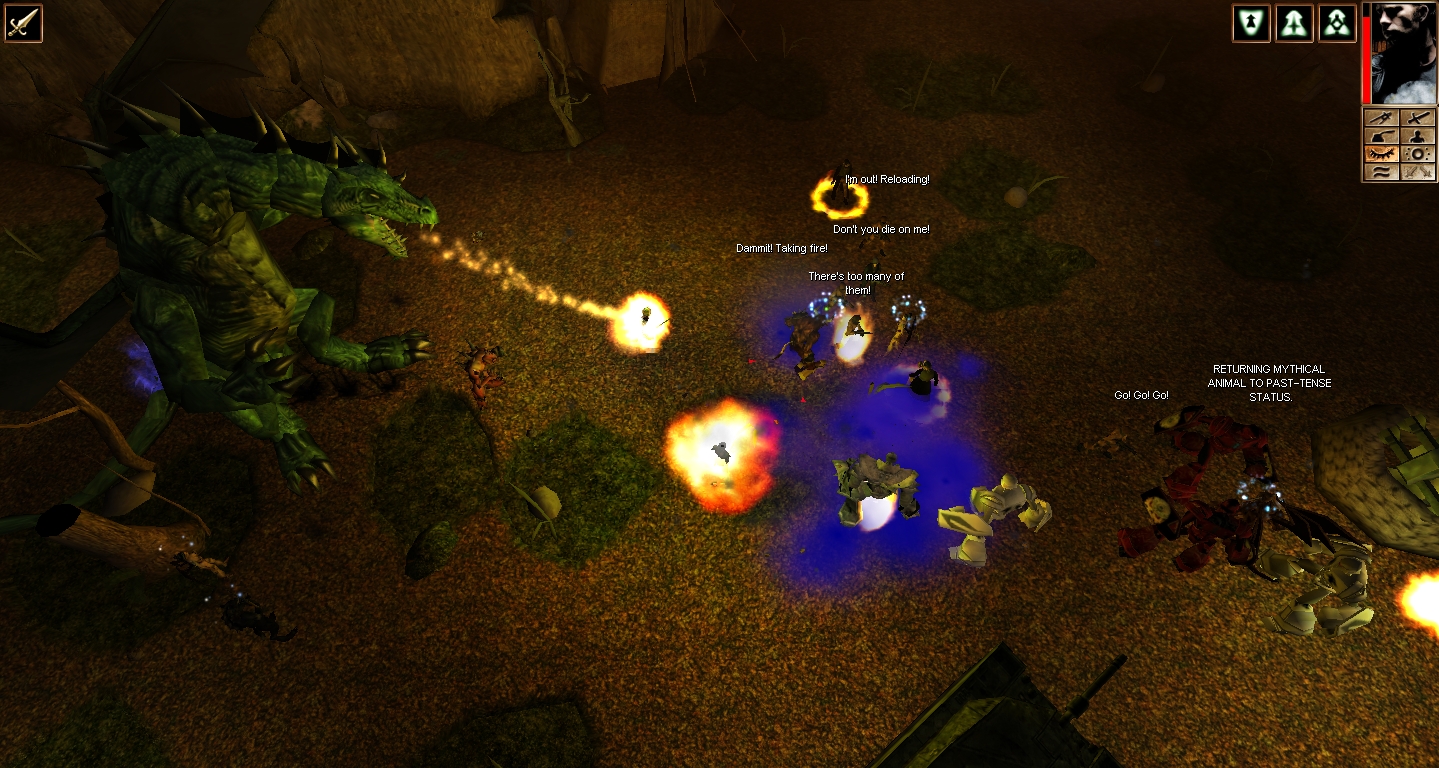 July Anarchy Prologue was all about turning Neverwinter Nights into the complete opposite of itself.

Lately I've been laying down the groundwork for a follow-up to July Anarchy Prologue, looking at what worked in the previous game, what could be expanded or tossed, and most of all how to provide a stronger sense of the universe around it. So rather than continue on into the rest of the work-in-progress novel that Prologue was based on, the next July Anarchy game would be its own story, taking place ten years before Prologue in an open-ended world. The working title of this project is July Anarchy: Incursion Namibia.

Incursion Namibia would focus on the early days of the Crisis, when the mythans (short for Mythical Animal) are just starting to get an edge over humanity. Namibia, the location of the first contact with mythans (known as the Namibian Incident), is the first nation to see its government collapse under intense mythan attacks, throwing the fragile sub-Saharan region into anarchy. The UN makes the country ground-zero in their push to exterminate the mythan threat, while mythan-hunting Nomads from all over the world are pouring in to deal their own brand of population control. All the while, what remains of Namibia is torn between local militias, aid groups, private military corps, bloody revolutionaries and more. The epicenter of this conflict lies in the Kalahari Desert region, which is where your story takes place.

Unlike Prologue, the player gets to build their own character this time, and can be either a rogue Nomad or a high-ranking UN Peacemaker, resulting in completely different gameplay styles for each. Nomads, like Alex Meda in Prologue, primarily use medieval weapons and magic in combat and build Adrenaline with each enemy killed until their animalistic instincts take over in a ferocious Adrenaline Rush. A UN Peacemaker sticks with modern firearms and tactics, able to call in reinforcements such as heavy armor, air support and air strikes, similar to the rewards of completing secondary missions in Prologue. Beyond your base faction, you can also determine your character's background and personality, giving you certain bonuses and tailoring the story to your character. For example, the Vengeance Seeker background gives the PC a personal vendetta against one of the mythan species that makes them more effective fighting it, while the Anarchist background makes the character more popular with lawless factions and despised by the UN.

DISCLAIMER: The concept images below were made in Garry's Mod and do not reflect progress on the actual July Anarchy: Incursion Namibia mod. 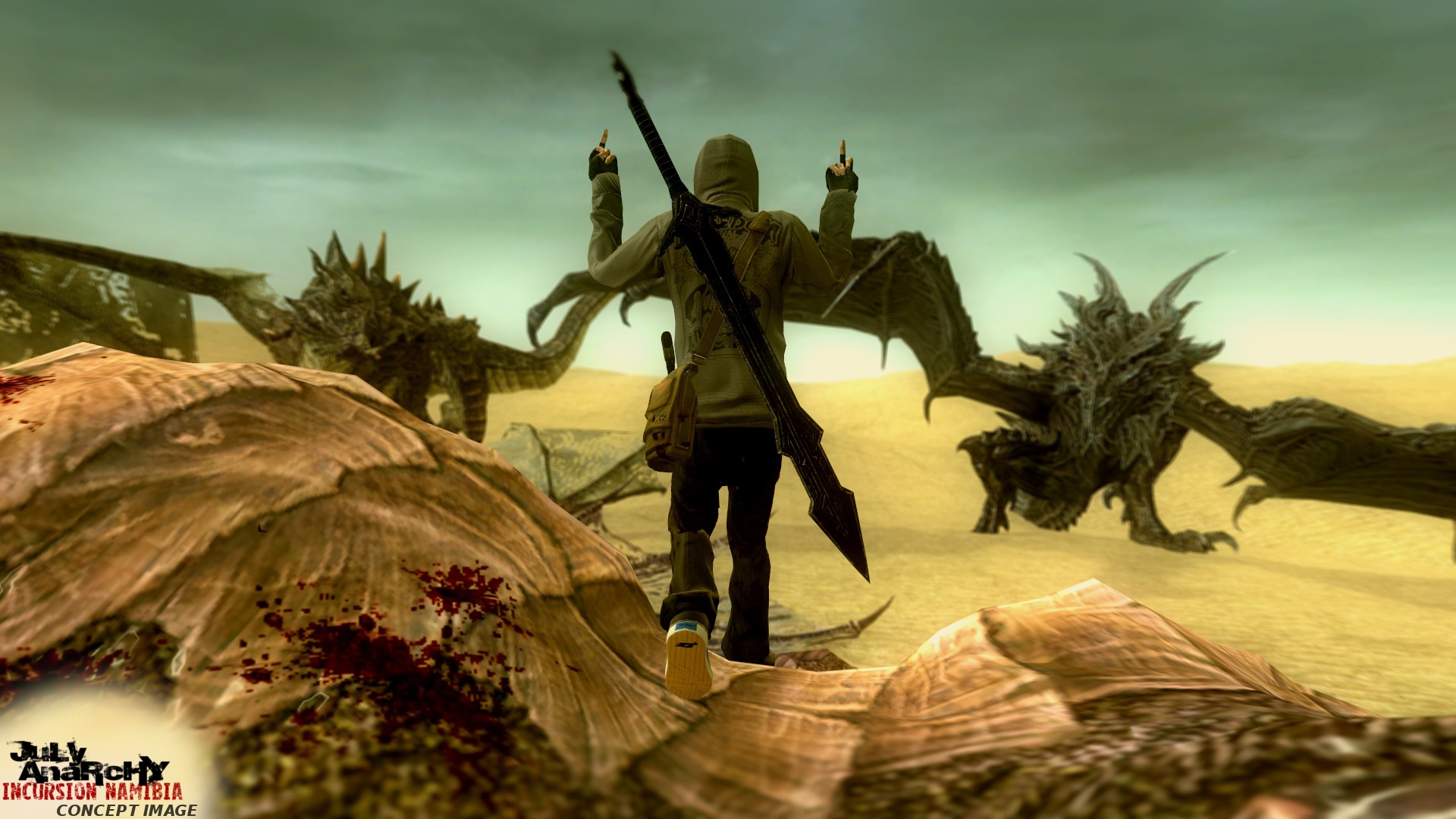 Once your character enters the Kalahari Desert, you have your own quest to seek out the heart of the mythan forces somewhere in Namibia and crush it once and for all. Your mission has you traversing much of the southeastern region of the war-torn country, interacting with various characters and factions while facing enemies both mythic and human. The gritty and morally-gray world of the Dyarodian Era is fleshed out as you witness the hardships of elves and dwarves in a prejudiced society, face a warlord who uses child soldiers, and question whether the mythans really are as evil as you've been told. Incursion Namibia features much more nonviolent interaction with the mythans than Prologue, so they're not things you can shoot, and your character might even fall into a taboo romance if you're not careful.

That's not to say Incursion Namibia is less violent than Prologue. The massive battles of the last game are back in full force here, but play out more naturally. When a battle between two (or more!) forces erupts, each side enters with a limited number of resources, and one side will have to retreat when it's lost too many people. Sometimes you can ignore a battle and accomplish your objectives in the area without regard of who wins, but if you do take a side, you need to protect the most important units your allies have while dealing as much damage as possible to the other team. There's also a new type of battle introduced, known as a Stronghold battle. This is when one army is trying to capture a base belonging to a rival army and plays out in two areas; the outside of the base and, if they penetrate base defenses, the interior. If you side with the attackers, you must enter the base and eliminate the commander to force the enemy to surrender. If you're with the defenders, you must protect the commander and keep the invaders out of your stronghold.

Central to these battles are factions, which play a massive role in Incursion Namibia. Factions are the various organizations fighting for control in the Kalahari region and can help or hinder your quest depending on who you side with. There are three tiers of factions: the Primary Factions (UN, Nomads, mythans), the Secondary Factions that have an active agenda and military presence in the region, and Sub-Factions that can side with Secondary Factions dynamically and bolster their forces. Helping a faction gain power rewards you with special equipment and reinforcements, and ultimately decides the future of Namibia at the end.

The strength of each faction is represented by their Accumulated Resource Index (ARI), which is a measure of all the weapons, supplies and personnel a faction has at their disposal. The lower the ARI, the less muscle a faction can bring to a battle and fewer patrols they have wandering the desert. Every faction member killed, convoy intercepted or stronghold lost is a blow to the ARI rating. This means that if a faction takes huge losses in one battle, you'll see the effects throughout the entire region. ARI also determines how a faction performs in battles you don't participate in, so if an organization loses a base in a stronghold battle you participated in, they could lose another in a different region without you doing anything. Most importantly, if a faction's ARI falls too low, their main base becomes vulnerable to attack, and the faction can be eliminated from the game altogether. The ARI system is meant to be incredibly dynamic, and the balance of power could shift dramatically if you don't participate in faction gameplay for days. 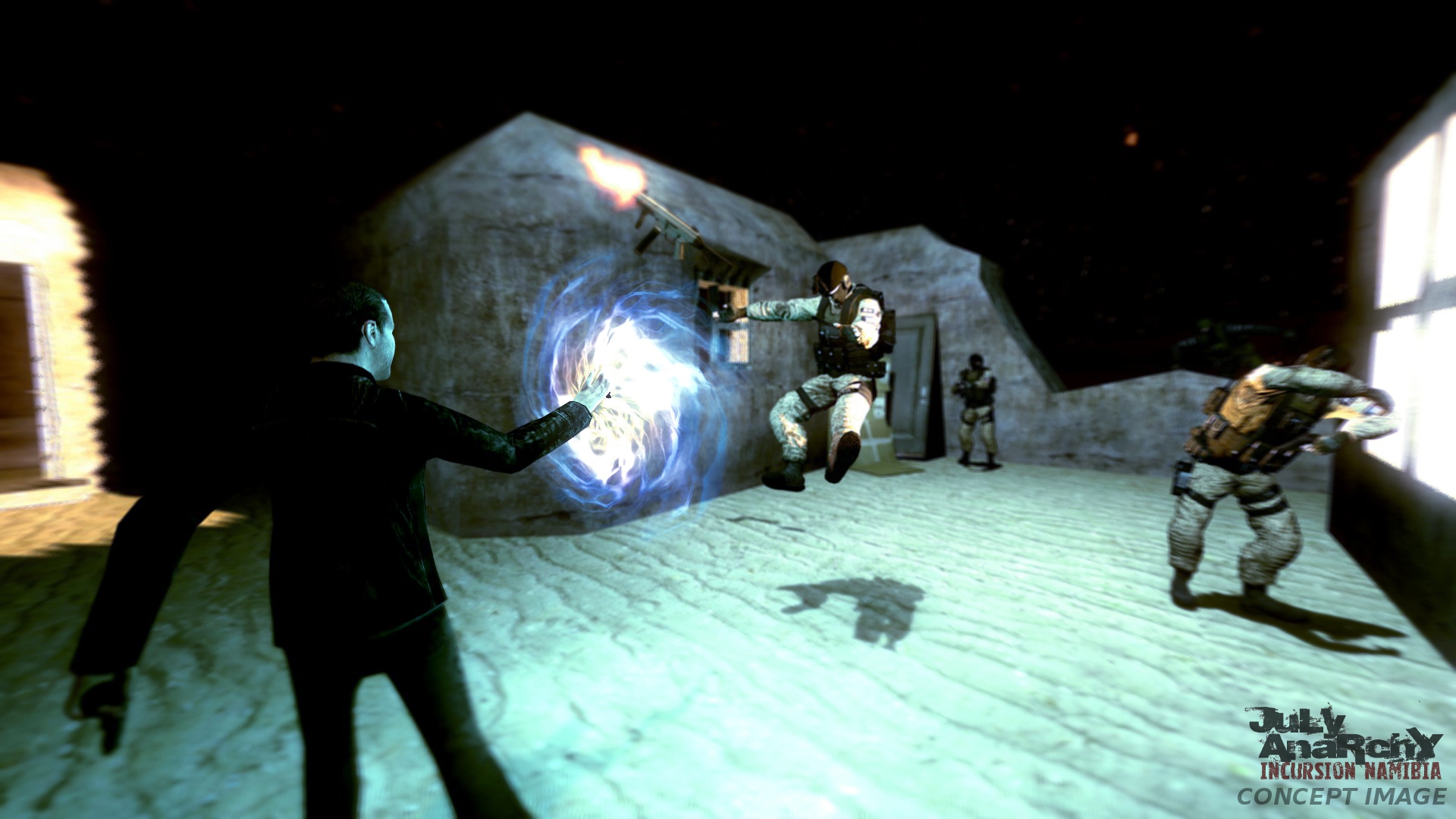 Humans are just as much a threat to you as mythans this time around.

One big change I'm hoping to implement from July Anarchy Prologue is an overhaul of the magic system that is in line with the Dyarodian Era lore. In this universe, magic is a universal ability to all mankind, and is treated as equal parts science and supernatural. However it is also dangerous to anybody who uses it. Mana is stored in a human's blood cells, and every spell cast destroys those blood cells, meaning that the more a person uses magic, the weaker they become, until they finally pass out from blood loss. So there's nothing stopping a level 5 character from casting a level 10 spell, but he'll almost certainly kill himself in the process.

Spell schools are now based on their effects on biology, physics, time, matter, and so on, so a character can specialize in a certain spell school to get the most out of their favorite tactics. A Biomancer can modify his own physiology or inflict groups of enemies with a crippling virus, while a Neuromancer can read minds and drive hostiles insane. Anybody who uses magic also has a natural shield, an Aura, that absorbs damage up to a point. A person's magical affinities determine the color and strengths of their Aura, so a pyromancer would have a red aura that resists fire. If an Aura goes down, it regenerates to full strength after some time. The tradeoff is that everybody in this game has a lower HP total (15 is considered high), so once your Aura goes down you can only take a few hits before you're dead.

Another big change is the possibility of co-op multiplayer of up to six players. Where Prologue was strictly single-player, Incursion Namibia can be played both alone and with friends. If you bring a team with you, the differences between your characters affects how you work as a team. Nomad characters will charge into the thick of things, building Adrenaline to take down powerful enemies while UN characters back them up with gunfire, tactical grenades and call in reinforcements. And while all participating characters are after the same main goal, they could end up supporting different Secondary Factions, making a cooperative effort erupt into a counter-operative war. 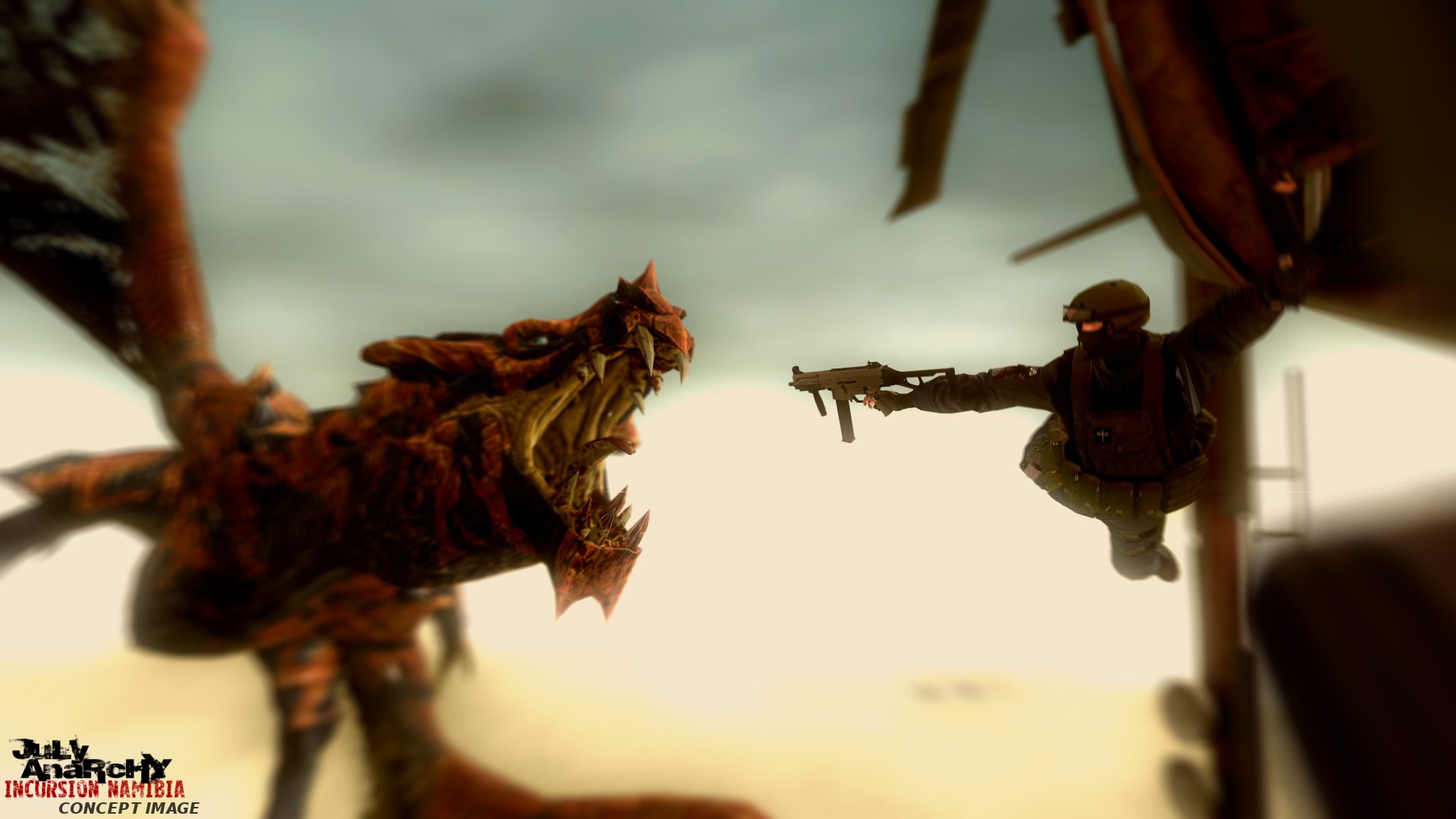 The groundwork has been laid in the Aurora Engine, but I'd rather see the game develop on an engine where this could actually happen in-game.

Obviously that sounds like a big leap from July Anarchy Prologue and the Aurora Engine entirely. That's why I'm considering moving the series to a different game engine. Bioware's Aurora Engine has been great for dialog and cutscenes, but I'm fighting it tooth and nail to get the combat right and retain the setting's nu-metal aesthetics. The most obvious choice for an open-world fantasy mod seems to be Skyrim's Creation Kit. It's great for designing interior and exterior areas, developing unique characters, and can support large-scale battles, plus modders are already making breakthroughs with online co-op and firearms. However, a multitude of total-conversion mods were planned for Oblivion, and I only saw one of them succeed, which wasn't a huge departure from a traditional fantasy setting. ArmA 2 or 3 could also support the large world and modern weapons the Dyarodian Era demands, but can it support medieval weapons, magic, minotaurs and advance character interaction? 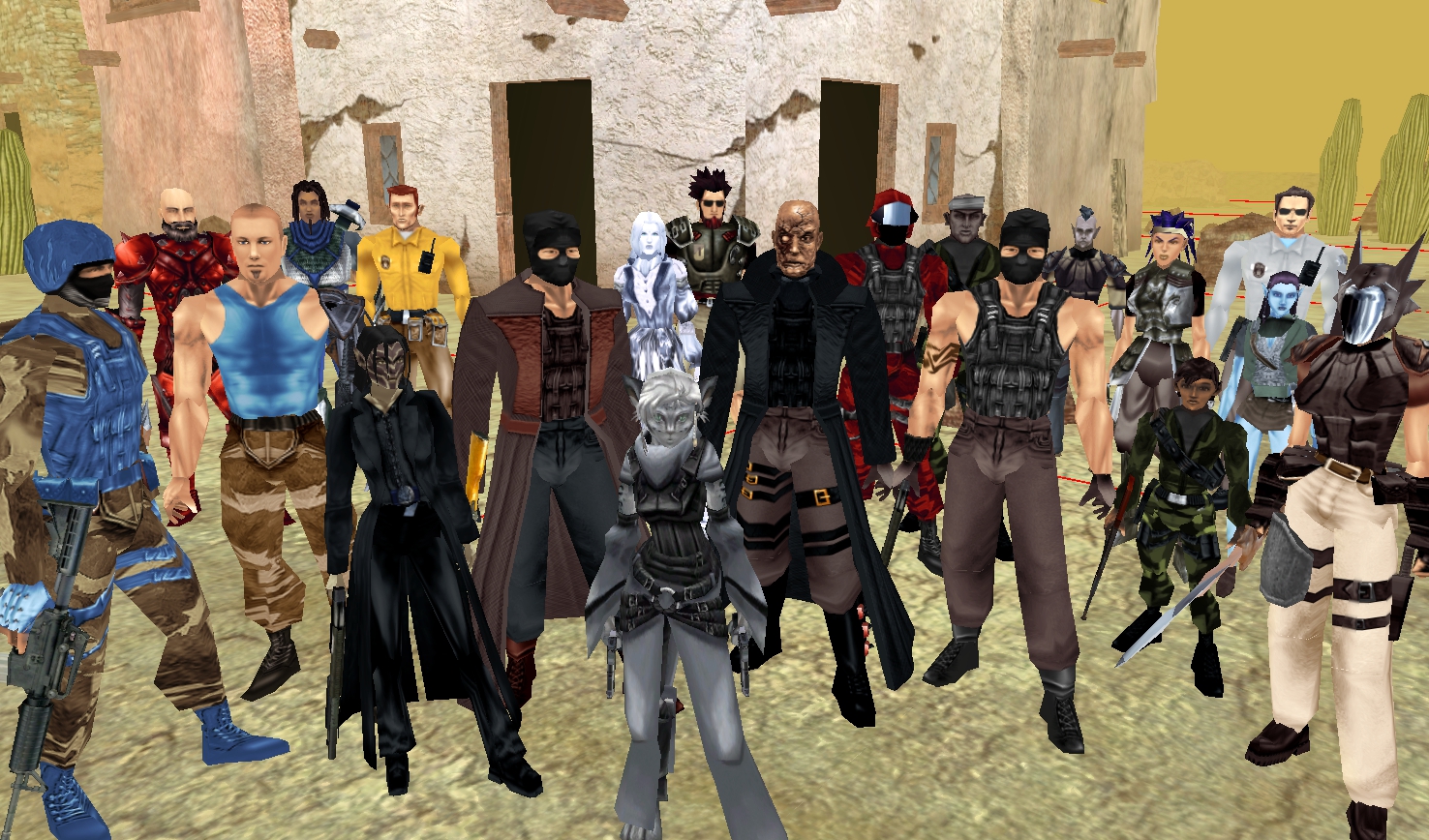 Can any game engine mix fantasy and the modern world as seamlessly as Bioware's Aurora Toolset?


Right now I'm digging my hands into every customizable game engine I can find and see what works best (even gave RPG Maker a try), and who knows, this may end up being an indie game made in Unity or something. For now, July Anarchy Prologue could really use an update, and Incursion Namibia remains on the Aurora Engine unless I find a better home for it. If and when Incursion Namibia does see the light of day, expect it to be one of the most aggressive open-world games you ever see!