Our last news post told of our relatively unambitious goals for Version 1.03. While working towards those goals, an unpredicted opportunity fell into our lap and since then we've been feverishly working to implement what that opportunity gave us. The next version of Conflict Terra will feature a traditional RTS gathering style economy.

That's right! Through the many contributions of Spring Community member Knorke, we've been working towards implementing an economic system that more or less functions like the much more traditional RTS economic mechanic of gathering resources with workers and returning them to a drop-off point. In short, we're mirroring how resources are gathered for games like Age of Empires, or Starcraft.

Getting the workers to gather resources wasn't the only part of the equation though. The workers needed an actual resource to gather, and those familiar with Spring know that that could be a big problem. Our solution went back to an old feature we had tried to implement but failed at: Space Rocks.In the current test-build of Conflict Terra, players start with their Flagship like they always have. They will then notice that small clumps of special rocks have spawned at points across the map. These rocks can (and should!) be mined by workers to gain Metal. The Mobile Headquarters is a drop-off point for the Metal, but special Resource Drop Zones can be built to provide closer accommodation. Metal Extractors and Metal Converters have been taken out of the game, and no unit now produces Metal off hand. Your only way of getting Metal is through gathering!

But those rocks will eventually dry up. That's when the fun starts. About two minutes into the game, meteors will fall at random locations on the map. The meteorites that these meteors leave can also be mined by workers. These meteors come in waves, and sometimes larger, more bountiful meteors will fall. It is then up to you to gather enough resources and beat your opponents!It became apparent after a few test games that while the system works and is definitely what we've been wanting, it requires a good deal of mobility to work well. With resources randomly appearing on the map in unpredictable locations, a player has to be able to move quickly and effectively to get the new resources. That meant it was harder to maintain a static base to build units while the workers were off gathering. This called for another old idea for Conflict Terra swept under the rug due to limitations of know-how: Cruisers.

Cruisers are already in the game, but have a limited role. Aside from the Flagship, the Battle Cruiser is probably the only other Cruiser that can really change the tide of a game. Originally, when the NKG was still only on paper, Cruisers were going to act as mobile factories, large hovering units that could produce armies and not be tied to the ground. The Spring Engine does not easily accommodate that however, so the idea was pushed aside in the name of getting the game working.

The new economic developments fit almost perfectly with this idea, and so it was decided to brush it off and overcome the previous limitations. While the Cruisers will still not be able to produce units on the fly, they will be able to morph into a static factory to produce units, and then be able to morph back into a Cruiser to move, much like the current relationship between the Flagship and Mobile Headquarters. While not the most elegant solution, it will be much better than the older system. The Cruiser to build Mechs has been made and is in the test-build of the game, although unaccessible through normal gameplay. Similar Cruisers to build Tanks and Aircraft will also be made and implemented, along with Tech Level 2 versions and a Tech Level 1 Cruiser Beacon. 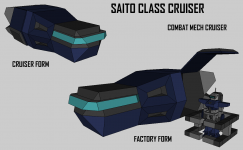 These developments have made the Development Team very happy, and we're very excited to get all of this up and running as it should. We're still not quite there, but work is steady. The next version, Version 1.03, will have these features, but you can take a sneak peak by getting the latest Revision from our SVN and seeing what we've done. Any input is of course welcome.