The first Weekly Update at Moddb - check it out for information and ranting!

Hey again, Moddb! I'm going to post a quick note on the title of the weekly update and a bit of information as to what it's about. On the TresCom forum, I've been doing updates nearly every week on RTJP's progress, outlining my ideas, facts, screenshots, work progress, random ranting, and much more - it all concludes with a "Legendary Glitch", typically resulting in the player's death via some silly instance of Trespasser's engine goofing up again. These updates have been going on for ten weeks now, hence the title "week 10", and will be following this naming scheme from now on. If you want to read the rest, go here (I would highly recommend such so that you can become more familiar with RTJP's progress): Trescomforum.org

Somehow, I've managed to sneak a lot of time into RTJP this week, despite an abundant amount of work and a sudden leap into Morrowind modding, which is really quite interesting and super easy with the Construction Set. For anyone I've intrigued, I've been working on remaking each of the game's Ancestral Tombs to be unique and much more detailed than before. The project's been going along nicely, but of course, I have made sure to use a good deal of my free time to mod RTJP, and let me just say, I've done a ton of new stuff level-wise.

First off, I modelled the big Monkey Pod tree that hangs over the Visitor Center, though it needs to be fixed because I managed to leave a branch floating in the air, and the textures need to be redone as well. Placed around the level as a test, I think it looks pretty good though; you'll see it in the upcoming screenshots.

Going around my old level to see what I'd done in the past that could be changed but still incorporated into the new map, I noticed that I was really unsatisfied with the way I'd done the starting helipad area. The road out turned the wrong way, the canyon was tiny, the river was flowing out of it...there was just so much that felt wrong. So I set about building the canyon and surrounding area in the new level, this time keeping it as close to the movie as I could get while still fitting in the roads seen on the map - here's how it turned out (note that the road going up the side of the mountain is a placeholder; it will likely be a tunnel later on). 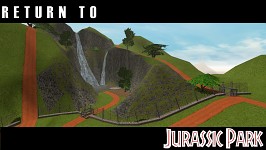 Remind anyone of a certain "lost" Trespasser level? 8) I''ll post more screens on the Screenshot Thread - check 'em out if you want. You will still begin your journey here, though I've been working on a version of the game's story with much less backtracking due to the map being so much larger. You'll need to visit almost every location on the island once, though it can still be freely explored. The only location you will have to return to will be the Visitor Center at two points in the story.

I was looking around at hppav's JPO test level for some ideas and came across the enormous wind turbine in the north, which made me think of my windmill power station that will be not far south from the helipad. I imported the turbine into my level and started working on the south of the island - first, I created a mountain range and altitude based on the EarthWatch map of Isla Nublar (which I will be using as the basis for most terrain sculpting), then carved out the areas where the roads will be located, detailed the coastline, and finally ended up with this: 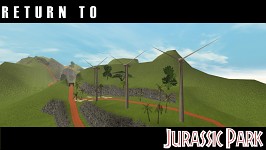 The area is still heavily unfinished, but you can see the basic idea. There will be a smaller set of buildings similar to the Summit sheds housing the generator for each turbine; these will link via a system of pipes to a larger control building that will feed power to the rest of the island. Of course, they will need to be restarted in order for them to become operational again, and each will have some unique puzzle to it.

I'm also not sure if it's apparent from the screenshots, but you might notice that I've got the Draw Distance turned up to render the entire island's terrain without it being cut off. Objects are still removed at the edge of the dense fog, but you are now able to see Nublar Mountain / Mount Sibo from the southernmost elevated point. This was done so that mountains don't just spring up out of nowhere when approached. Hopefully it won't have too much impact on the engine - if it does, I'll bring it down and hope the trees can cover the issue as in the old RTJP. :)

Anyway, I've got a lot more I'd like to get done to the southern end of the island...gotta add the perimeter road, work out the cliffs behind the windmill station, make some terrain objects...so there should be room for some more screenshots in a future update. For now, I'll hand the article over to:

Legendary Glitch of the Week:
Severe trigger malfunction led to a door flying open, getting stuck in a constant circular loop around its hinges, and finally killing a velociraptor causing interpolation with the nearby wall. The raptor promptly proceeded to shake its booty while its head had disappeared into the wall.