We learned that some of you would like to follow our work in more detail. This post is a first try to give you some insight into our weekly development.

What did we do the last 7 days?

Jens created the concept and design for a planetary trade system that looks pretty promising so far.

Next thing he did was a first draft for some new characters (see post title): The space merchant will come around when you have some valuable gems and products to offer to trade them for research tokens and more… The Electronic Employer is the ultimate planet exhauster. Major Eko is good for sub-quests regarding environmental issues. The Illuminati are the natives of Bora. Living in their pyramids they got a very strange technology to turn the planets forces against you if you turn out not being a friendly visitor.

Additionally to these new characters he made a design concept video for how the communication with these guys might look much more sci-fi style in the future. It’s on our new youtube channel and you really should set the quality to high. 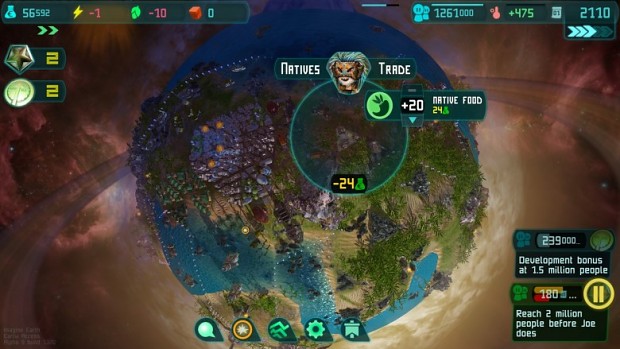 Martin has been working on an artificial intelligence for computer players that will be used in the Bora mission. Right now it simply starts to grow it’s population by building districts. Resource buildings are built whenever required. Some parts are still missing though. The AI still has to learn that building a lot of fisheries next to each other doesn’t make sense. In addition it only grows it’s city to level 2 for now.

Nexthe started to implement the trading system we have been discussing lately. It will allow you to buy resources from natives and to trade with friendly AI players.

In between I added the new characters and temple buildings for the Illuminati to the game.

The last thing (some minutes ago) was implementing the Warehouse that stores overproduced goods so they can be used for bad times (see the bar over the goods balance at the top center of the screenshot).

What comes next week?

Our main focus will be adding all gameplay elements necessary for the Bora mission. There might be some volcanos, additional AI routines and other stuff like that. If there is some free time available we will create a galaxy screen for your sandbox planets. This screen will allow you to “discover” new planets which means that you will be able to keep the generated planets and collect them on a screen similar to the one from the campaign. One day (or hopefully already in some weeks) we will also add the ability to terraform those planets and to add and remove all available buildings so you can create interesting scenarios like demolished cities.

The AI we are building for the computer players on Bora is only a first step. We want to make this available for the free play, too. But obviously it will take some more time to make sure the computer becomes a good player and opponent.