Post news RSS Weekly Devlog #9; Get your Speedrun On

A look at how Speedrunning will work in Zarnok Fortress from control schemes to level layouts and beyond.

Zarnok Fortress will have a variety of features in order to make the game speedrunner friendly. As events like AGDQ increase in popularity, now is a good a time as any to implement some simple design decisions which complement the time-limited nature of Zarnok Fortress.

While there are certainly conventions for how games play, some people are used to playing games differently. Also, depending on your play-style, you may want different abilities mapped to different buttons depending on how you hold the controller. 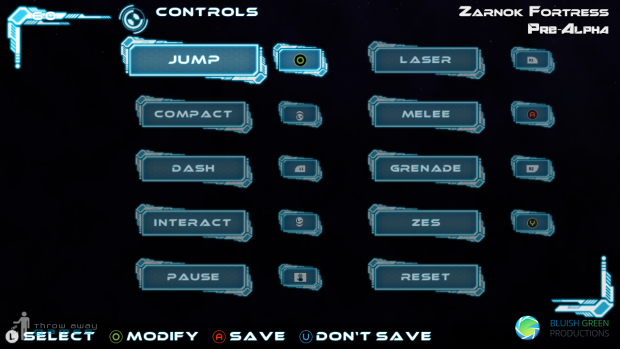 Every action in the game can be re-mapped to any button (including directions on the d-pad) on the controller. Actions like Compact and Interact can even be mapped to the analog stick. Also, when you start a new file you can Turn Off Dialog Sequences so they don't count against your time total.

There will be a number of technically complex maneuvers you can pull off by combining abilities. Compact yourself and then jump for a Spring Jump. Dash-Jump and then Compact for a Crouch-Jump;

The only way to fit yourself into small gaps.

I've tweaked the controls multiple times to ensure actions like these can be performed as easily as possible. As an example, going into Compact mode used to halt your horizontal momentum, but that made crouch-jumping pointless as a means of traversal. I've since altered this limitation to make it simply that you can only initiate a Dash while not Compact, but it will not cancel it until the fold-up animation completes.
Obviously first-time players cannot be expected to pull of techniques like this, so there is one more key element to the Speedrunning support of Zarnok Fortress;

Some people like Combat, some people like platforming, some shy away from both but still want to progress through the game. Zarnok Fortress will feature various paths throughout its levels that cater to all styles of play. You can use advanced platforming techniques to find hidden paths that skip you past certain parts of a level, or even super secret paths that skip you past entire levels! My hope is that this will lend to increasing the replayability of Zarnok Fortress as you strive for ever more efficient paths in an effort to save your home planet from destruction.


This design practice of multiple paths and speedrunning will persist throughout the design of the entire game, but it's one I arrived at relatively recently. At first I was simply going to include hidden paths in certain pass-through walls, and that may still come into play. As you watch the above demo-speedrun, keep in mind that any levels that don't look particularly fast just yet will either be tweaked or removed (or kept for bonus levels not in the main campaign.
If there are any speed-runners among you, drop me a line! I'd love to hear what you think of the steps I've been taking to implement speed-running into Zarnok Fortress and what suggestions you may have for its improvement.