This week I wanted to implement all the new toys I made last week with the ants' vital system, so I started to expand the station. The "two block connected by two corridors" design was hard-coded, and a pain in the ass to expand. So it was clearly time to work on save games.

I thought it would be very difficult to implement, but luckily I was quickly done. By now I've expanded it and most stationary things get saved to simple text files. It will need maintenance with every new feature, but that's the nature of the system.

Here's a pic of the new station, which can now be build in-game: 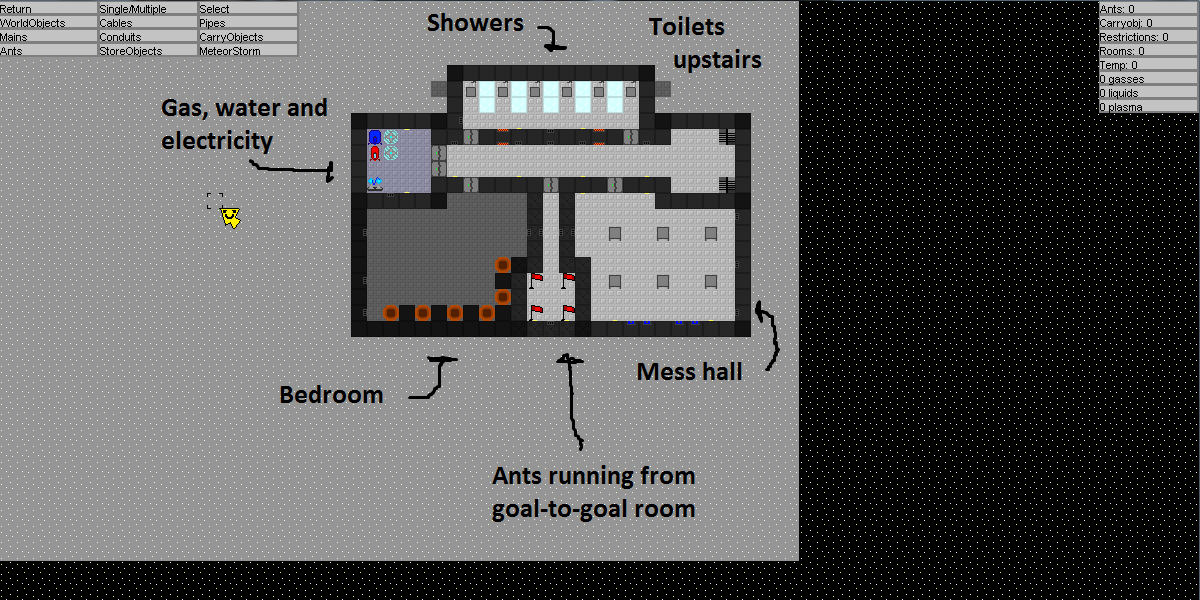 I kept it fairly flat (so little use of separate Z-levels), to make it easier to keep overview.

This should give you a lot of control where you work and live. While the it's a fairly abstract feature, it opens up a lot of gameplay options. For example, you could isolate your queens with only a small amount of servant ants. Or you could create self-imposed castes among your ants. Or you can just keep the stupid scientists with their explosives away from the engines.

Ants are very obedient and will notice if they're violating area restrictions and will make it a priority to fix it. This means that ants will run off the clearance area, or towards a confinement area once you set it up. The gif shows the installment of a clearance area at the goal-room. 1) There is no clearance. 2) I add a clearance (the ants remove themselves from the room). 3) I give them clearance (they start running in the room again). 4) I remove their clearance one by one (they move out again).

After restrictions I started on rooms. This was a fairly logical step, since in the game rooms are just restrictions, but only affecting certain activities. For example, a bedroom will affect how ants choose their bed, but no other activity You can assign ants to rooms, making them private. This comes down to: you can enter the captain's bedroom (to move an object, or to save an ant from suffocation), but not sleep in his bed.

Below you see a shower room with one ant assigned. The other four need to share the one common shower.

A second use for rooms is to designate areas such as storage areas. Currently the game features storage rooms where you can choose what can fit in a storage room. The gif shows ants storing glass sheets and metal sheets in separate storage rooms.

I also worked on objects being constructed from materials. Ants will collect the building materials for an object (wall, floor, table, etc) and then start building it. Below you see an ant collecting three sheets of metal and then starting construction on the wall.

And below you see an ant constructing a goal post from three bodies his dead comrades. This was for testing purposes and won't stay in the game.

Last weeks I made sure that ants could die from extreme environments (no air, extreme temperatures, plasma) and they avoid places with such conditions. I implemented a space suit which provides air and isolation for an ant. It's quite basic at the moment, but later you'll have more specialized suits which also need to be refilled with air. The gif below shows that only one of the four ants can collect metal sheets lying in space for storage, since only one space suit is available.

I implemented the beginnings of meteor storms. When a meteor storm occurs, loads of meteors start flying from one of six directions (from up, down, left, right, top or bottom). An unprotected station can receive quite a bit of damage. Below you see the result of a bunch of strikes. The atmosphere start leaking and there is a lag at one point where it needs to calculate the result of extensive destruction.

Meteors will be a source for resources and you'll mine them in the game for their contents. Meteor storms won't be random, but I'm not sure yet whether you'll have to steer the station into one or attract a storm by some gravity device.

I already added the 'meteor catchers' which is how you collect meteors from space. And Shield Walls, which protect your station from meteors, but need power to function. Below you see an image of a meteor-catching setup. Below that is a gif of the whole thing in action. 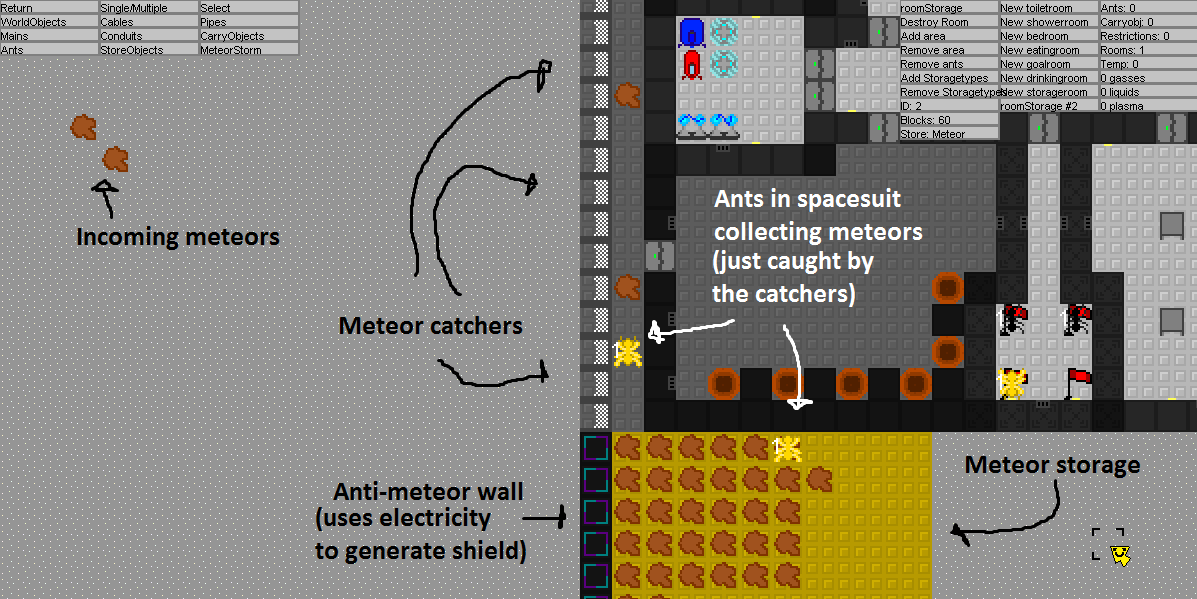 This is by the way how the station looks now (showing I cannot build stations efficiently): 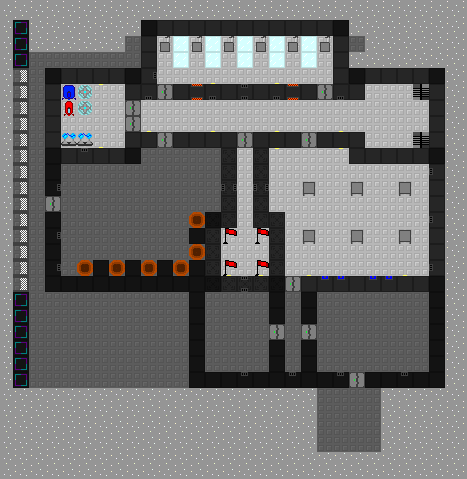 So, a productive week. I'm fairly sure next week I'll start on the life cycle of ants and different castes of ants. Feel free to ask questions and give feedback!