Valley of Trials makes progress this weekend. It's not much, but it's enough to show off and consider noticeable progress.

All weekend I've been either playing World of Warcraft or recreating it. That's right! I signed World of Warcraft back up so I can get more references that are of what I need exactly without having to rely on others. Yesterday and today I did the most work on Valley of Trials and a tiny bit on Southern Durotar (which is basically anything that's in the southern region of Durotar but outside of Valley of Trials) so hooray for that. I've made a bit of an error with Valley of Trials; the exit/entry of Valley of Trials is too far from where you first start when you create a character. I'm going to be working on either letting it slide and squeeze in a couple newer details or simply just terrain the exit again, but closer this time. 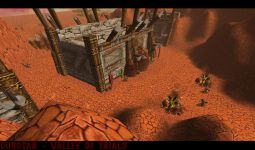 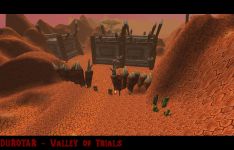 I am likely to make even more terrain progress for a few more weeks since I have new motivation; Bob27, the creator of Wc3:WoW's previous trailer video on YouTube, has agreed to start creating intro cutscenes for each race when the player creates a character. The first races to have intros in Wc3:WoW will be the Orcs, Trolls, and Tauren. We'll also be using the same sound files used for the introduction narrations, so it'll be a lot like when you first create a character even more. Unfortunately, in World of Warcraft, the camera covers a lot of the starting zone and main city - something we aren't going to be able to do. However, it's not so bad since people usually skip the cutscene after watching it once or twice. So instead of having the camera go all over the place, it'll just fly and hover around the first map you'll actually get to play in. It's not much, but it's just about the best we can do. I thought about creating an intro map for each race which would just be for the cutscene, but figured that it would be pointless since people would likely skip it and no one wants to go through more loading screens than they need to.

That being said, I'll be working on Mulgore's Red Cloud Mesa and Durotar's Valley of Trials quite frequently. What about Orgrimmar? Shamanyouranus and other modelers are creating doodads for me to continue the terraining process with ease. One major task for me to get done is Thrall's Chambers.

Aside from terrain progress, our dedicated JASS expert Yixx has been making a lot of progress with the interface and system itself for creating characters in Wc3:WoW. It looks great, even in the early state it's in now.

STAY TUNED FOR MORE UPDATES...
[EDIT]
Because of how much attention we've received, I'm pushing hard to release at least one screenshot tonight! Keep your eyes fixed on the profile!

WoaW!!!!!!!!1 but u rally needto put och more bushes, and the terain is werey much "the same story", i mean that it is the sam thing. it is al in the exakt the same colour every were on the ground xD

Yeah. Thinking of getting someone to retexture the tiles for Durotar; I noticed that Durotar has more of a dark orangish dirt style rather than a cracked red earth style.

it allows you to fly around freely in the wow world, great for your purpose

Hmm... never heard of that before. Thanks for the reference!