This week, the first seven maps added to Dark Times II will be shown one-at-a-time, one per day. Today, day five, take a look at "Kashyyyk: Treetops."

The fifth map for Dark Times II is this - Kashyyyk: Treetops. Of the maps I've made for this project so far, this is probably the one I've had the most fun doing from a creative standpoint. The concept is not entirely original (but then again, that is the fun part about doing a Star Wars mod - there are lots of good pre-made pieces of "concept art" to work with), but it is one that hasn't been explored in Battlefront and it certainly lends itself well to exploring.

What was most fun here was working with the concept of "infinity" from a visual standpoint. Obviously no map for a video game can be truly infinite (a game with dynamically loaded instances might come close, but Battlefront II is obviously not one of those games), and so trying to portray a continuum of scenery that extends out well past viewing range is always a challenge. There are a lot of ways around this - distance fog, skyboxes, etc. - and most of these can be easily implemented in Battlefront to an acceptable level of portrayal.

This map was a notable challenge because it called for two special requirements - a perpetually extending forest and a (visibly) endless drop. Normally one or the other of these wouldn't be a challenge by themselves, but this was fun because I got to work around making the map look like it didn't have any "ground" and I got to play around with making props - and not just sky features or mountains - extend off into the distance from a height. See for yourself: 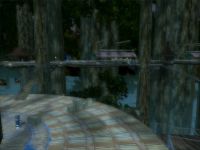 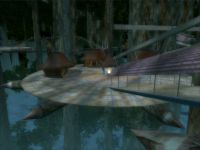 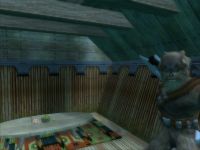 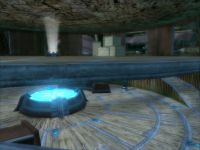 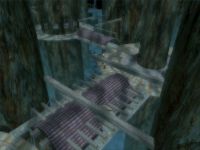 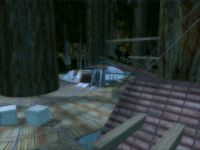 Kashyyyk is - if you are familiar with the films' lore - the home planet of the Wookiees. Despite its appearance in Episode three as a beach, it is mostly covered in forests like this one, in which the Wookiees live - in villages like this one. It's been explored in a lot of media, and I was hesitant to do this map just for that reason (Battlefront I and II combined had three different Kashyyyk maps), but since this particular setting is relatively unexplored (treetop villages), it was too appealing a prospect to pass up.