This week, the first seven maps added to Dark Times II will be shown one-at-a-time, one per day. The third day brings "Raxus Prime: Canyon."

Dark Times II's third map is Raxus Prime: Canyon. Raxus Prime is similar to yesterday's entry in that it too was made for a mapping contest - but I was not its author. This map comes to us from Eggman.

Unlike the past version of the project, Dark Times II will not be my work in its entirety. Several map authors have volunteered work for this project, and Eggman was the first to volunteer a map that I knew would fit well with the project. So while this map may be one you've seen before, it of course has been touched up - all maps coming in to the project have, at the very least, the new modes and new skydomes added to them. This particular map was very well-done and I had to do very little to bring it up to spec. 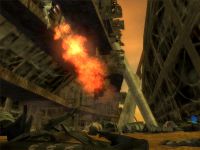 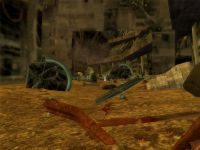 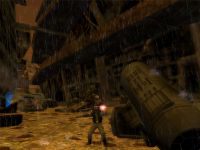 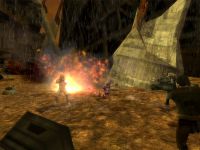 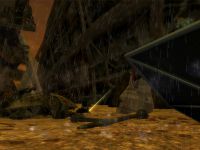 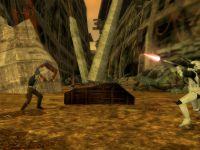 This map represents the "junkyard planet" Raxus Prime. In this map, the battle takes place in between large broken hulls of long-crashed space ships. The ground is littered with smaller pieces of rubble and broken technology.