A short description of what I've been working on these past two weeks, including elemental effects on units, finishing research, adding building descriptions, and working on some smaller parts.

So these past two weeks have been quite a ride. I've worked on a lot of aspects of the game, which has taken up a lot of time. Other than the new things I've added I've also worked with my team mates to start cutting down bugs, even though there still are quite a few around.

So first I'll talk about the research system I had been working on in my last blog post, which I have now finished. So the player can now get research from the chests which they collect (or buy ;) ). The research blueprints can be researched in the library, and then give small bonuses to the nubs, specifically health or damage.

The research time can also be skipped with gems. This completes this aspect of the game, except possible changes in the visuals of the interface.

Next I also added descriptions for the buildings when the player tries to build one so that they know what each one does, and a small picture of it. This was not very hard to implement, actually a lot easier than I expected, because I thought my spaghetti code would cause buggy interactions.

The white square on the left is a placeholder for an image of the building, so the player can get an idea of what they're getting themselves into.

The next major part I worked on was adding elemntal effects to the different units depending on whether they are fire, lightning, or ice units. This took quite some time, and some effect are still unpolished. I used particles that are severely limited, because mobile platforms don't handle particle effects evry well. I stress tested the game with 40 particle systems emitted a maximum of 5 particles at a time, which didn't seem to impact performance drastically. 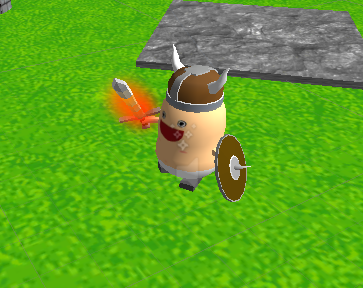 These are the fire and lightning effects. As the camera is a fair distance away from the nubs the effects don't have to be very detailed, but still recognizable. I might make them a little bigger to make them more obvious.

A small change I made related to this is that the player can't train fire, lightning, and ice variants of units if they don't have any equipment available for them.

This should help with clarity in regards to how the loot system works. Surprisingly this was quite a lot of work to implement in an efficient manner, as all the ways I thought I could solve this at first involved running multiple loops per frame. Eventually however I found a very efficient way of doing it.

As a small fix I also increased space between buildings because from player feedback we learned that with large armies it was a huge struggle to get through the town with the nubs.

For this next week, which is the final week, I will be fixing up and clrifying existing features, and then adding a short tutorial, save states for the game so that players can quit and reload, and I'll be balancing the economy of the game, which will be a lot of work.