Bughunting, Refining Flight Mechanics and adding GUI Feedback are the focus of this minor but important ChopperSquadX update.

GUI Tweaks and Flight Mechanics - A minor yet very important update. Of course in a game named ChopperSquadX the flight controls will be crucially important and this update makes a number of final tweaks to the present system. Testing had revealed a rather nasty bug that removed any left/right drift when moving up/down. Unfortunately since it was an error in logic instead of code structure it was frustratingly difficult to find but in the end the problem was resolved and the code is more streamlined as a result.

The new flight model has created a user experience that is much smoother and closer to a true "chopper" flying experience. The chopper object reacts to user input with the correct amount of "floatiness" and precision (some models were rejected because they were too precise). Different chopper types will respond differently due to size/weight but the core mechanic is almost dialed in. The chopper also displaying proper sync with the game world and pixel perfect alignment with scrolling background/parallax objects. 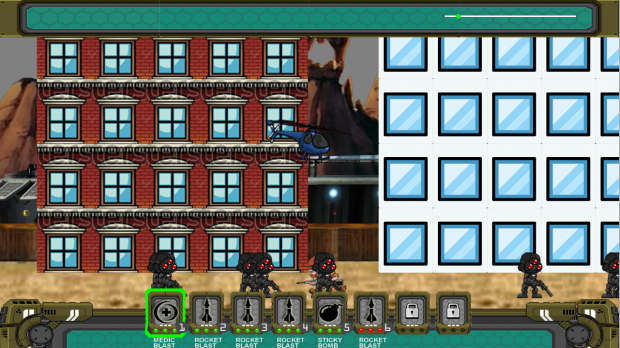 Other changes centered on GUI feedback. The area under the buttons which I designed to be a handy area to show status messages does double duty as a space to show button text labels. The individual troop selection screen has also been updated to show the current troop selected and total number available. It also provides visual flashing feedback when the user makes their selection. This same method will be used to flash the player/enemies when they get hit. 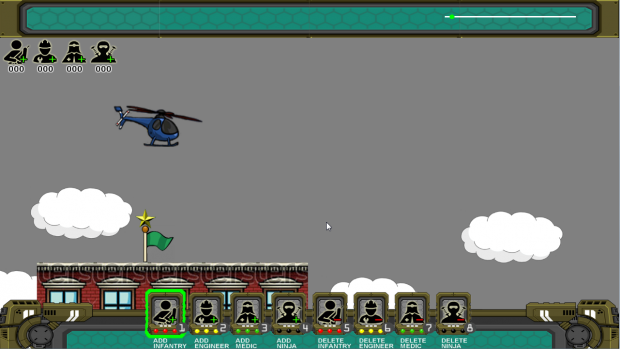 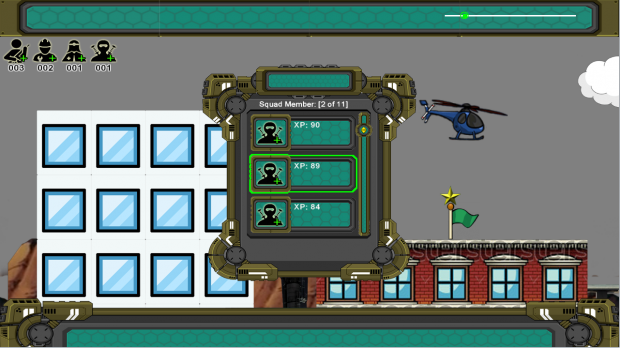 The flag destroy animation has been updated and uses a routine that randomly repeats and displaces the explosion to create bigger blasts. This is one instance where I must point out that GameMaker made the job a lot easier. Its focus on "objects" with attributes allows me to define my explosion object at x,y and have everything automatically execute, animate and erase itself afterward. It may have its limits but its got some nice tricks too.