This week I continued to resist the urge to add shooting and rockets to the chopper. At this point theres no active target so I would have spent time adding a feature that I would have spent too much time playing with in the name of 'testing'. When I add firepower I want to be able to 'play' the game in some capacity (I've been wanting to play this game for a while). This week I focused my attention on getting the squad 'moving' and responding to target flag deployments. Now when the play drops a flag the squad will troops will head to the farthest right marker. The player can easily control ground force movement by adding/deleting flags.

Previous images displayed only the ninja sprite this update rounds out the squad and additionally adds the sprites the the Army, Engineer and Medic. In my effort to provide as much variation as possible to gameplay as possible the player is not presented with preset forces. Instead the player is given a budget and can customize their troop selection to their liking. Thats my first stab at increasing replayability of levels. Failed with a ninja heavy squad? Try again with more engineers and medic. Its all up to the player. Also when building squads for a building assault the first troop type selected becomes the squad 'leader'. The effect in-game will give that troop type first strike when attacking. This will allow the player to select ninjas as the lead that can use 'silent' strike attacks to disable the enemy without alerting nearby guards. 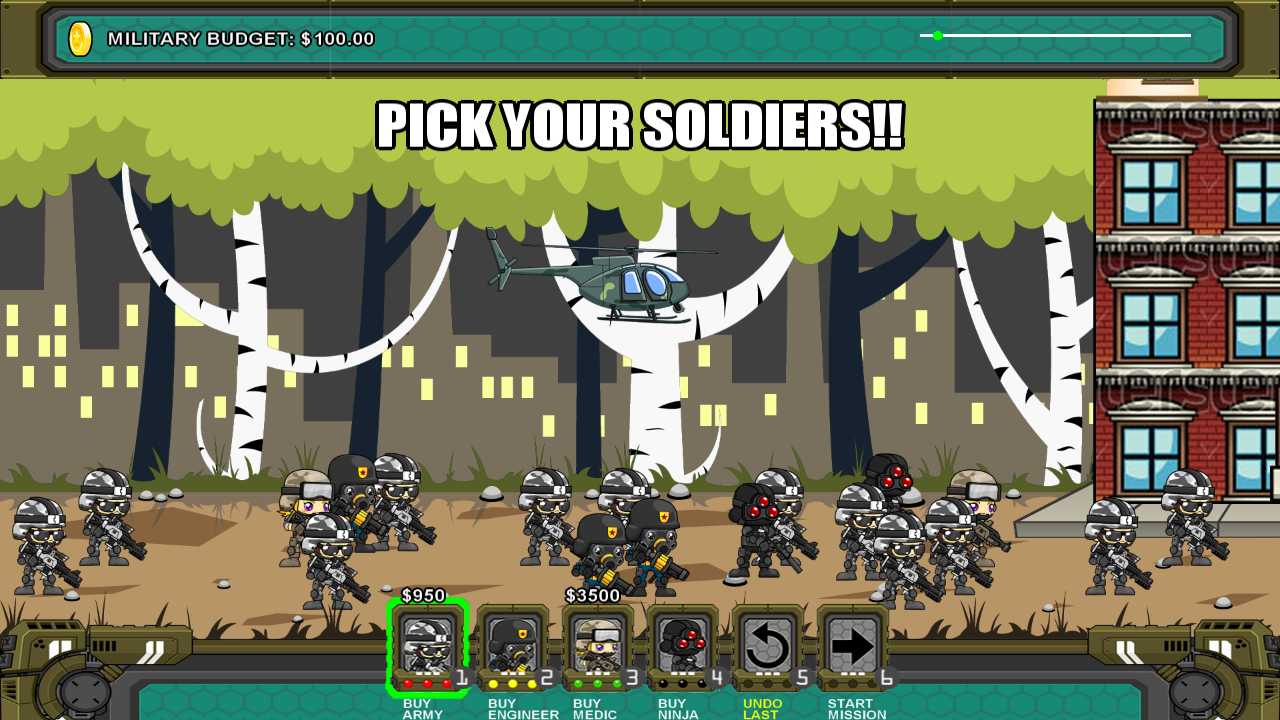 Troops, Enemys and Flags have been properly layer distributed so images are in the correct Z space and things look natural when they move in front and behind each other. Up to this point troops were static but this update gets things moving. To position troops the player only has to drop a flag and all ground troops will head towards it. Deleting the rightmost flag will make the troops halt if no other flags are present or retreat to the nearest existing flag. At first this presented an issue with all flag seeking troops converging on the same point. The addition of flocking/spacing AI gives each soldier their own 'personal space' so they dont bunch up. 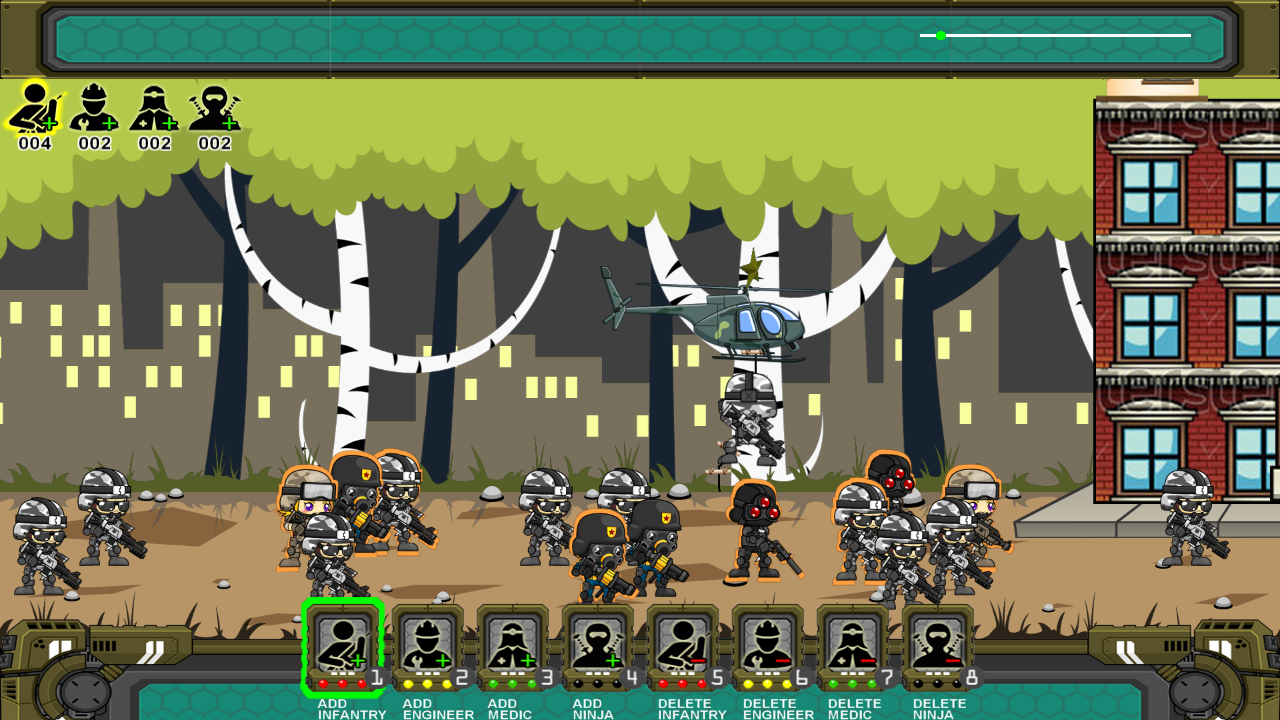 Troops can now be summoned to 4 different locations - Flag, Chopper, Ground Floor Entry and Rooftop entry. All unassigned ground troops will always head to the rightmost flag. Troops assigned to the chopper will eventually flock towards the chopper. This update adds the ability to 'load' the chopper with troops. Lowering the choppers ladder activates the squad load mode. Troops selected for chopper load are highlight and can currently be 'picked up'. If the ladder makes contact with them they will climb the ladder and enter the chopper. Future updates will have chopper selected troops automatically head for the lowered ladder and upon contact they will climb and enter the chopper.

Troops selected for ground entry will head toward the building once assigned and troops selected for rooftop entry will have to be player choppperlifted to the target roof. The roofs will also be populated with anti-aircraft weapons, remote drone antenna's, snipers and other obstacle that will have to be cleared by chopperlifted squads. The player will have to wisely choose their troop distribution strategy. How many to leave on the ground, how many to assign to any building assault and which troop type leads that assault. These choices are easily made with the current GUI. I'm striving to create levels that can be attacked multiple ways to provide player variation. 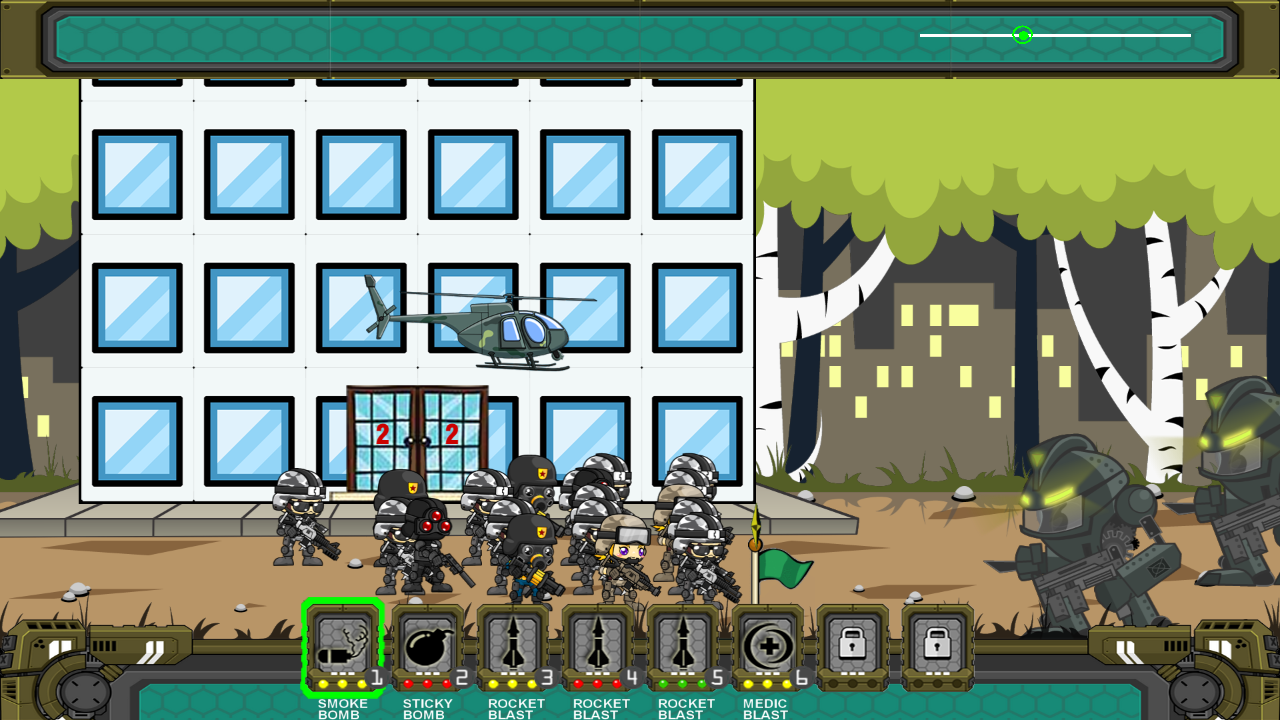 This update focused on the ground troops. Getting your initial troops selected via player choice, adding a monetary system, flag seeking and proper layer distribution. Upcoming weeks will shift to deploying chopper loaded troops and getting them to seek the inside building markers. Inside building enemys have also been assigned 'levels'. Higher level troops are placed on the lower floors to protect from Ground Entry assaults. This will encourage the players to select the ground or rooftop entry that offers the least resistance.