This week turned out to be the change of pace I needed. The last couple weeks I've been stuck under the hood programming a lot of the underlying systems I'll depend on later. The shift to graphics was a welcome break that allowed me to keep moving the project forward. For the last couple months I been archiving graphics and backgrounds I might possibly use in the game and this update finally gave me a reason to sift through them and pick some items that'll make a decent demo. (I also realized how much I bought that I'll never use in this project)

This update tested the flexibility of my core routines. Luckily I had little trouble extending them to add the features I needed. My first target were the parallax layers since they would create the most dramatic change. Unfortunately none of the multiple packages I purchased worked for me as-is but combining a few pulled off the look I wanted. The layers are seamless and can scroll forever, perfect for 'Endless' game modes. I also added bases to the buildings. 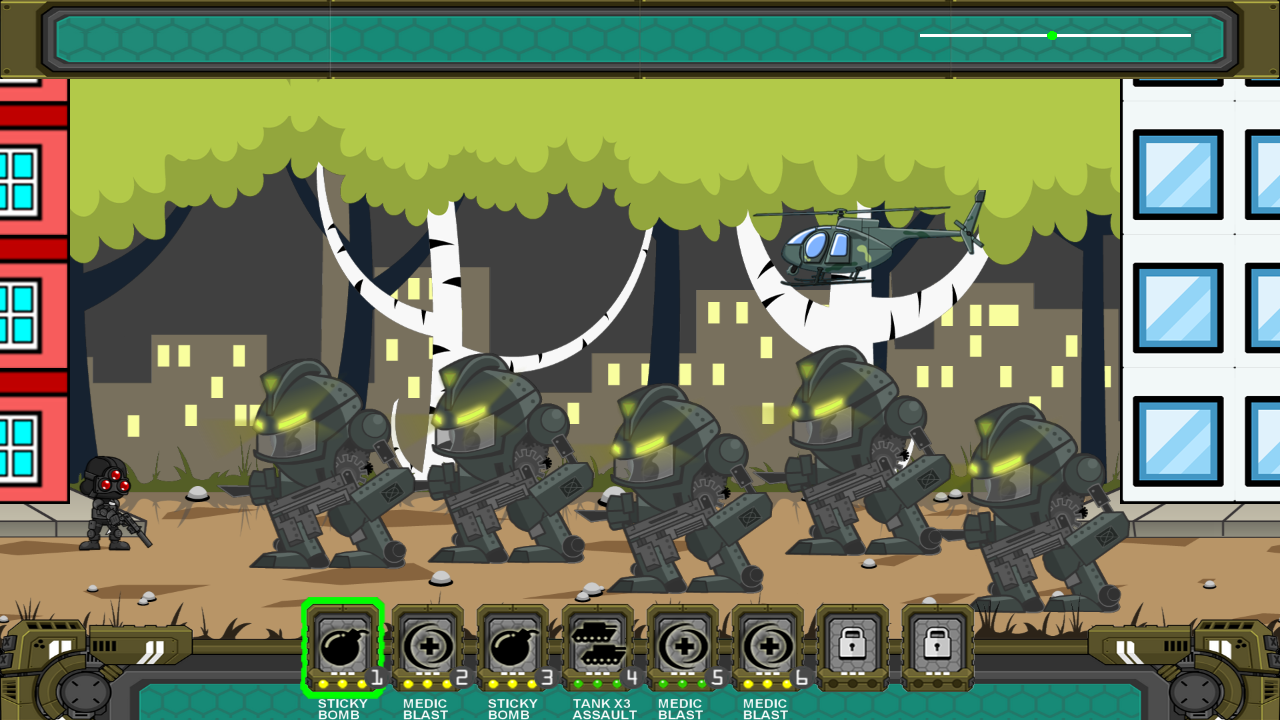 Next on the agenda was auto-spacing the buildings to leave room for my midpoint mini-boss fight and also at the end of the level for the eventual level boss. (I also had been waiting to finally get the mini-boss mech onscreen since he looks so kool). Initially buildings will be scan-locked until you defeat the building guard holding the key. Locked buildings display XRay scan lines and random radar static. The enemy will eventually reassign guards to buildings with missing/defeated security. 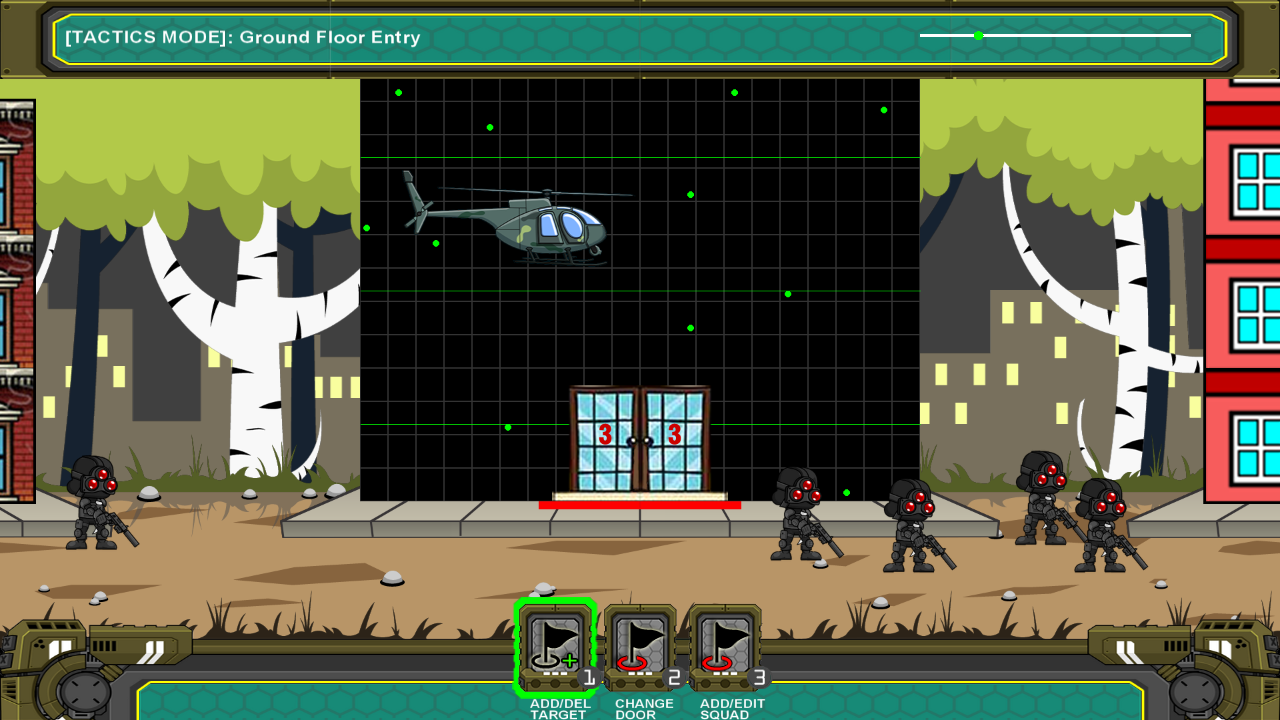 Inside the building ladders have been converted to sliding doors and been given squad based locks. You will have to consider the makeup of your squad to make sure that all doors towards your objective can be opened. PowerUp/Buff stations were the next addition. When activated they will provide passive buffs to squad members every 30 seconds to 2 minutes. Control of buff stations will be critical to giving your team the advantage they need to defeat the enemy. Locked stations display their unlock cost and are color coordinated to the buff type. 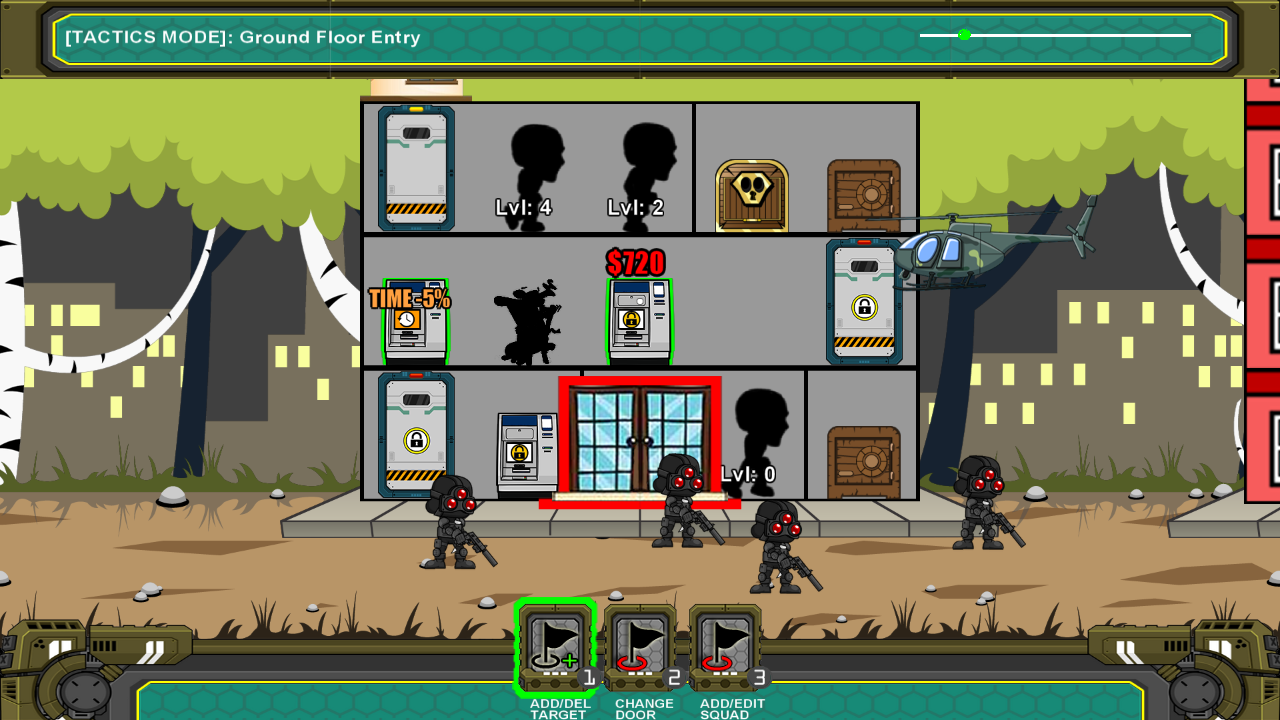 Rounding out this update I complete the conversion of my programmer placeholders. The tokens that represent coins have been converted to chests of varying rarity that range from low reward wood safes to silver/gold safe with much more cash and/or rewards. I also added a chopper/ground collision smoke cloud. Eventually you'll take damage from the collisions but currently it just shows the smoke and rebounds the choppers.

Aside from a few small details I've completed most of the internal components for my buildings. Doors, locks, buff stations and reward chests are in place and working as expected. The enemy will also fight to gain control of buff stations you possess. (They also learn which buildings have the most buff stations and target them)

I feel pretty refreshed after this week. I ditched most of my programmer art (still have to redo the building outside tiles and add signage) but got quite a bit done. Next on the agenda is FIREPOWER!! Its just about time to add bullets and rockets to the party. After that I'll be able to focus primarily on Enemy Animation and basic AI.