In our first deep-dive gameplay video, we’re going to take you through the weapons and skills in Mass Effect: Andromeda.

In Mass Effect: Andromeda, you are the Pathfinder – the ultimate adventurer in a vast, unexplored galaxy on a mission to find a new home for humanity. You’ll visit untamed worlds, make lasting relationships with new companions, and face some of the most dangerous challenges the Andromeda galaxy has to offer.

In our first deep-dive gameplay video, we’re going to take you through the weapons and skills that you’ll become familiar with when the game launches on March 21.

The action in Mass Effect: Andromeda is built around fluid, fast-paced, third-person combat. You’ll experience freedom of movement with the use of a jump-jet that allows you to jump, evade, and hover in the midst of battle. You’ll also discover a dynamic new cover system that enables you to seamlessly use almost anything, including your own vehicle, for cover. Using your jump-jet and the cover system, you’ll be able to approach each battle in a way that suits your gameplay style.

In Mass Effect: Andromeda, there are four categories of firearms: pistols, shotguns, and sniper and assault rifles—plus a range of melee weapons for up-close combat. These categories accommodate a variety of specialized play styles. If you want to get in close, you can focus on melee, shotguns, and pistols. If you prefer to shoot while on the move while maintaining your distance, assault rifles will be your weapons of choice. Or, if you like to hang back and pick off enemies one-by-one, sniper rifles will be the way to go. 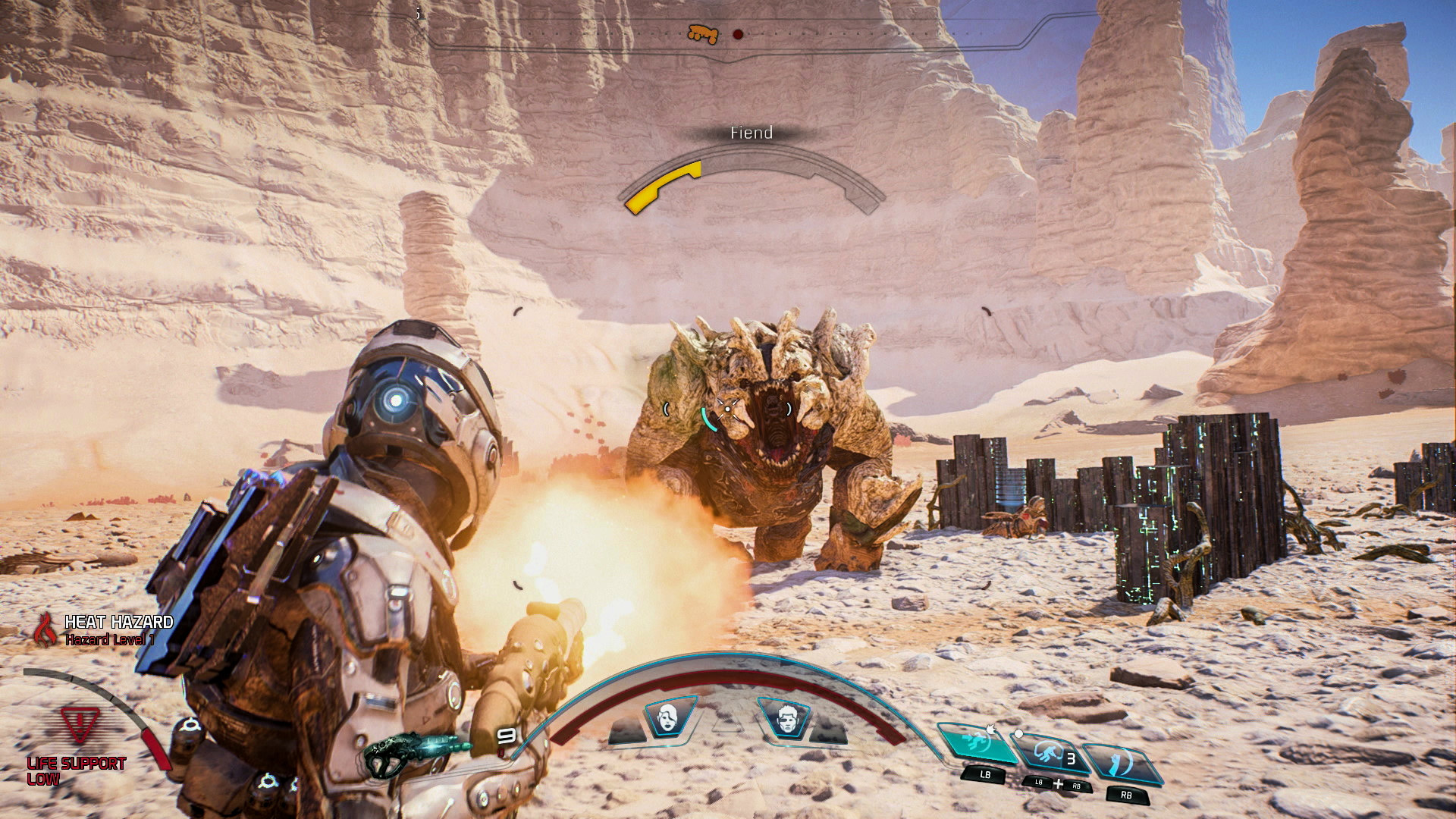 There are no class restrictions on weapons, so trying something new is as easy as switching your loadout.

Weapons and gear in Mass Effect: Andromeda fall into three technology types based on where their supporting tech comes from. Milky Way weapons typically use physical ammunition that’s similar to the types of weapons you might be familiar with from the previous three games – with some advancements, of course. These are high-impact, projectile-based guns; they’re great against most non-shielded targets, but require you to keep an eye on your ammo.

Remnant weapons typically use beams, have a high rate of fire, and are extremely accurate. They use an overheat system that doesn’t require a reliance on ammunition. You’ll never run out of ammo, but you’ll have to wait for your gun to cool down from time to time.

Melee weapons vary in both damage and speed. Hard-hitting hammers do maximum damage, while lightning-fast shivs or swords allow you to get in and out of harm’s way with speed and precision.

In addition to weapons, you can also develop skills and abilities. Like the weapons, there are no restrictions on what skills you can choose, and each of the three main categories – Combat, Tech, and Biotics – is designed to facilitate a certain style of play. 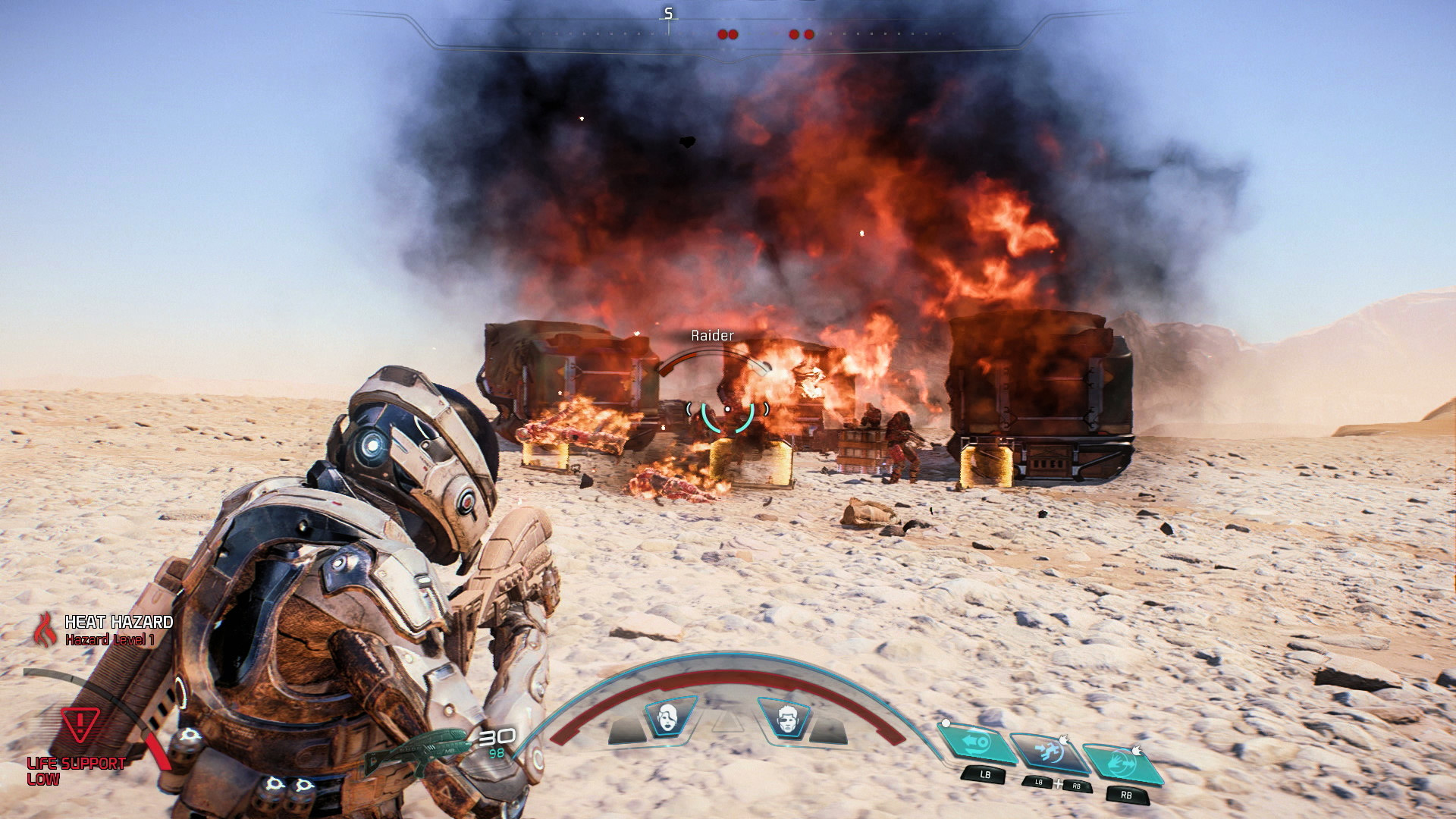 Combat skills are great if you want to focus on weapons, gear, and efficiency in battle. These skills focus on improving weapon damage and accuracy, as well as enabling the use of flak cannons, grenades, trip mines, and more.

Tech skills allow you to equip your Pathfinder with more experimental weaponry, or focus on strategic improvements for yourself and your squad. The Cryo Beam and Flamethrower offer more offensive punch, while skills like Invasion and Energy Drain weaken your opponents and soften them up for easier take-downs. And, if you need some additional firepower, you can deploy your very own assault turret.

Last, but not least, your Pathfinder can control dark energy to manipulate the power of mass and gravity. Biotic skills like Pull and Throw allow you to literally control the battlefield, using your enemies as shields or even weapons. Abilities like Annihilation and Singularity, for example, will damage anything or anyone caught up in their powerful grip.

Each skill can be upgraded to become increasingly more devastating and effective, with different upgrade paths for even more ways to customize your play style. Enemies in Mass Effect: Andromeda have specific strengths and weaknesses, and your strategic use of different skills and abilities will determine your tactical advantage against your opponents.

Be sure to keep your eye on MassEffect.com for more information on gameplay in Mass Effect: Andromeda, as we’ll be touring you through squads, crafting, multiplayer, and so much more before launch.

Mass Effect: Andromeda launches on March 21, 2017 in North America and March 23, 2017 in Europe. Sign up for the Andromeda Initiative now to receive pre-departure training information and exclusive in-game rewards.